The night before Carter's birthday I prepared for the next morning by hanging streamers from his door with my dad and pulling out a bag of marshmallows, a candle, and a lighter and putting them on the dresser.  I wanted to be able to go right into Carter's room to greet him the next morning carrying a marshmallow with a candle in it.  The idea came from Ty's grandma.  Ty's Aunt Netta mentioned one of her favorite holiday memories as a child was that her mom would bring her a marshmallow with a candle in it into her room on her birthday.  I loved the idea and knew right when I heard it that I wanted to carry on the tradition with Carter man.  It will be fun to tell him where the tradition came from when he's older.

I woke up at 7:15 and checked the monitor to see Carter was still asleep.  I went to the bathroom and then laid back down.  At 7:30 I was too excited to fall back to sleep and couldn't believe Carter wasn't awake.  I checked the monitor and saw he was sitting in bed playing with his buddies.  I got out of bed and got the marshmallow ready.  Just as I finished he started calling for me.  Ty got up to go in with me and Carter was caught off guard by how bright the candle was.  I hadn't thought about how bright it would be walking into a dark room.  I handed the marshmallow to Ty and I hopped in bed with Carter.  Once he was in my lap he didn't mind the brightness of the candle anymore and even blew it out.  Ty went back to bed when Carter got out of his.  Carter and I headed into the kitchen where he woke up his Oma and Opa on the futon and picked out a birthday present to open.

We spent the morning playing outside per Carter's request and I decided to go ahead and take Carter's 24 Month pictures while he was playing since he was wearing his special 2 shirt for his birthday.  When we came inside Carter made his birthday cake from a special Zebra cake mix he picked out earlier in the week.  While the cake baked I let Carter open another present and he played with his new puppets in the living room.  We played with the puppets on our hands and then Carter laid them down and laid blankets over them.  Once the cake was finished we laid it out to cool and headed out to Cici's pizza for a special birthday lunch for Carter.  We made it home a little bit before 2:00 so Carter went down for a late nap, but went down right away with no rocking or fussing just like a big 2 year old boy!

When Carter woke up we ate an early dinner.  Then it was on to what I'd been looking forward to all day, well honestly all week, cake decorating!  Carter picked out all of the decorations at Target.  He had regular frosting, tubes of green and blue frosting, green sprinkles, M&M's, and Kit Kats.  I had thought about frosting the cake ahead of time because I wasn't sure if Carter would be interested or not.  He iced the cake a little bit and then wanted me to do the rest.  When it came to decorating he was adorable.  He helped me pipe some frosting around the outside and then was carefully putting M&M's on the cake.  Some he would leave and others he would pull right back off so he could eat an M&M covered in frosting.  Then Ty showed him how to throw M&M's onto the cake and things quickly got out of hand, so I had to put the M&M's away.  When we moved on to Kit Kats Carter took them and made a line around the outside of the cake exclaiming "Choo choo train!"  I should've known he would make a train of Kit Kat bars!  It was cute to watch him use the Kit Kats because Ty's groom's cake at our wedding was wrapped in Kit Kats.  To top it all off Carter dumped the entire container of sprinkles in the middle of the cake.  It was so much fun to see him decorate and we enjoyed singing him Happy Birthday (while Skyping with Gma and Gpa), having him blow out his candles, and letting him serve the cake.  He was the best little party host! 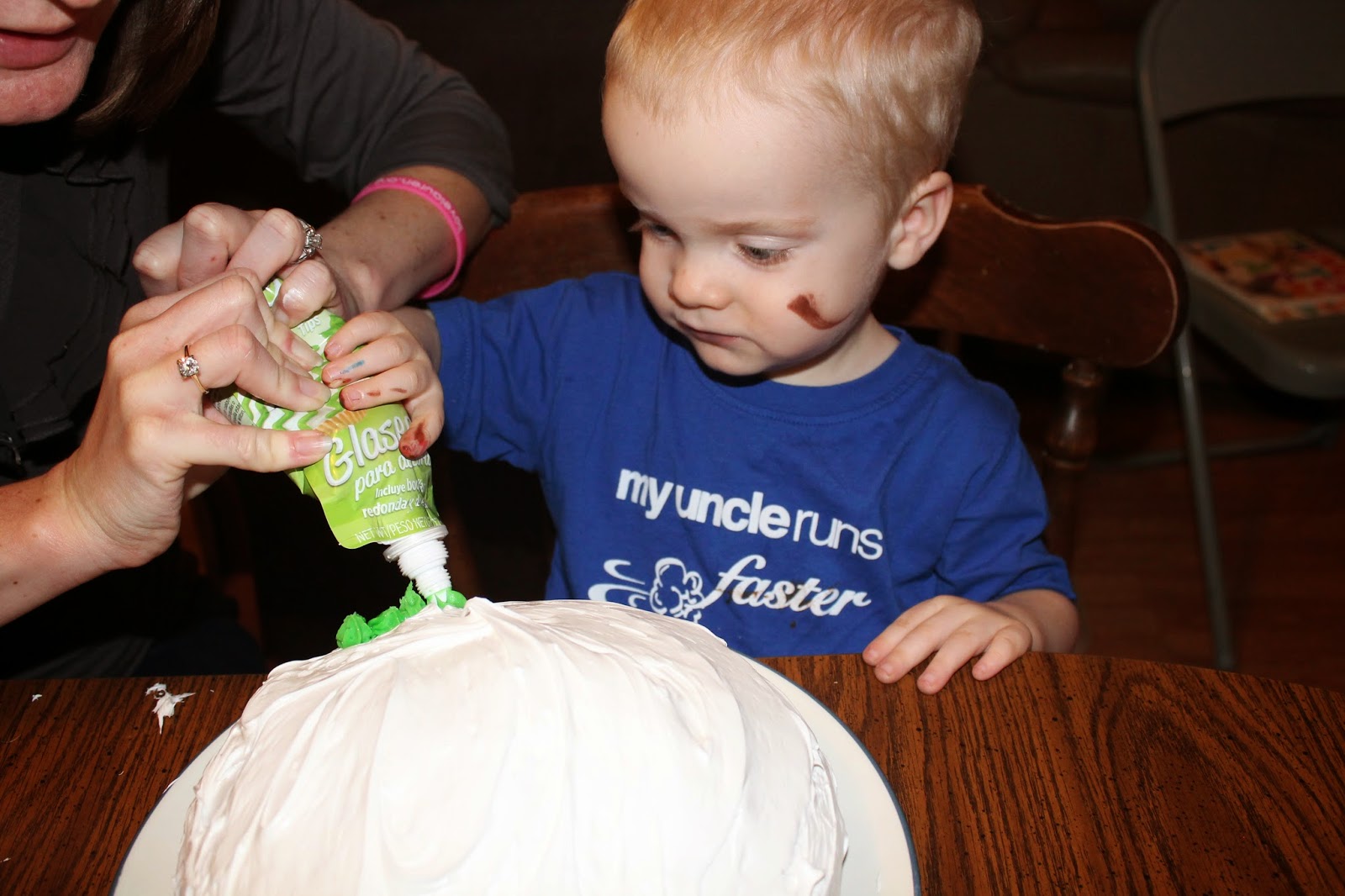 After we ate our cake Carter opened presents.  His favorites were Hot Wheels cars from Uncie Jeremy and a train set from Oma and Opa.  We had to bribe him with cars to get him to open the rest of his presents after he opened the cars.  I told Ty that was good practice for his party.  We'll have to find out if anyone got him cars and have him open that package last!  Once all the presents were opened he took off to play with his cars and did so until bedtime.  Carter went to bed with lots of sugar in his belly and after having lots of love showered on him all day.  It was a wonderful birthday!  Now we're looking forward to his party this weekend!  Read about Carter's 1st birthday here.
Posted by Liz Runningmomma at 11:21 AM