We've been running the Jingle Bell 5k which benefits arthritis for years.  We continue to run it because we like the cause and because the race is so much fun.  They give you jingle bells to wear on your shoes and the age group awards are always holiday related.  One year they were Christmas ornaments and another year they were large bells on a pretty ribbon.  I'm not sure what they were the last time we ran it as I was 35 weeks pregnant with Carter and didn't place in my age group.  Last year we had so much ice the weekend of the race it was deemed unsafe and canceled.  This year mom signed Carter up for the 1 mile fun run figuring he would love it.  Each year they've run the mile fun run before the 5k so she knew we'd all get to watch Carter run.  Then when we looked at the schedule of events we saw it was to start 15 minutes after the 5k.  We were all disappointed because that meant the rest of us wouldn't get to watch Carter run.  Mom decided to sign him up for the fun run at the Turkey Trot so we could all watch him run his first race and then we'd just miss his 2nd race.

Standing at the starting line they announced the fun run was to start at 9:30 rather than 9:15.  I got so excited when I realized I would finish before Carter started and could even run the fun run with him!  From what I remembered the race was run on a hilly course.  I went into the race prepared for it to be decently hilly.  The course was changed a little bit from previous years and had only mild hills.  I took off at a pace that felt comfortable and cruised through the first mile in 7:31.  I was shocked!  I figured I was running just under 8 minute pace and couldn't believe I was running so much faster!  The highlight of the first mile was about a half-mile in when I was running past a couple of really young girls.  One turned to the other and said, "I'm getting tired, are you?"  I didn't hear the second girl's response, but then the 1st girl said, "You know we can walk, right?"  I was cracking up.
I felt so good during the 2nd mile.  I focused on maintaining my pace and staying comfortable.  My belly wasn't feeling big or in the way.  At one point I was thinking, people probably can't even tell I'm pregnant.  Then I happened to glance over and catch my reflection in a store window and was brought back to reality when I saw my large and in charge belly leading the way!  When my 2nd mile split popped up I was impressed that I ran a 7:29 split.  I had been worried I would get too hot during the race as I borrowed a long-sleeved underarmour from Ty and wore it with my Jingle Bellies tank top, shorts, and tall Christmas socks.  The temperature was around 45 degrees at the race start.  I did get pretty sweaty but never felt too warm because it was drizzling which kept me from getting too hot.  I didn't feel like I had sped up too much during the 3rd mile but went through mile 3 in 7:19!  My watch showed my finishing time was 23:05, over a minute faster than my time at the Turkey Trot!  Looking at the online results they have my time as 22:47.  I have no idea how my Garmin could've been 20 seconds off as I didn't start it until I crossed the start line, I stopped it crossing the finish line, the clock showed 23 minutes as I crossed the finish line, and a 22:47 is 7:20 pace which I didn't hit with my mile splits.  So I'm going with my Garmin time although it would have been cool to run under 23 minutes.  I finished 3rd out of 41 in my age group, 6th female out of 293, and 45 out of 505 total finishers.

Jeremy was rocking it up front like usual finishing 7th overall with time of 18:36 putting him 1st in his age group.  Thomas finished in 23:59, 5th in his age group and 56th male finisher.  Ty didn't run because he came down with bronchitis earlier in the week.  He decided to stay home and sleep in rather than come watch or run/walk the fun run with Carter.  Dad also sat the race out because he was sick and mom was only registered for the fun run so she could run with Carter since the race was supposed to start 15 minutes after the 5k.

I ran a cool down and then met up with mom, dad, and Carter on the course.  As I caught up to them it was adorable to see Carter holding his Oma's hand on one side and his Opa's hand on the other as he ran along.  I took some pictures and speed walked alongside them for a while before Carter asked me to pick him up.  When he was ready to run again he said "ready!" so I set him down and he took off running again.  He loved running along with the three of us and especially enjoyed when we got passed by a group of runners with dogs.  At one point he got really distracted by a train going by in the distance and wanted to be carried so he could watch it.  With about a tenth of a mile to go we got passed by a group wearing a giant box as a present.  They cheered for Carter which scared him and he wanted to be carried for a little bit, but was quick to ask to be put down so he could run the rest of the way to the finish.  I had such a blast run/walking the fun run with Carter and I know his Oma and Opa did as well!  It's so much fun to see how much he enjoys run/walking.  I'm thinking Carter will want to do the fun run at the Jingle Bell race again next year!  All day after the race he wanted to stomp his feet so we could listen to the bells on his shoes. 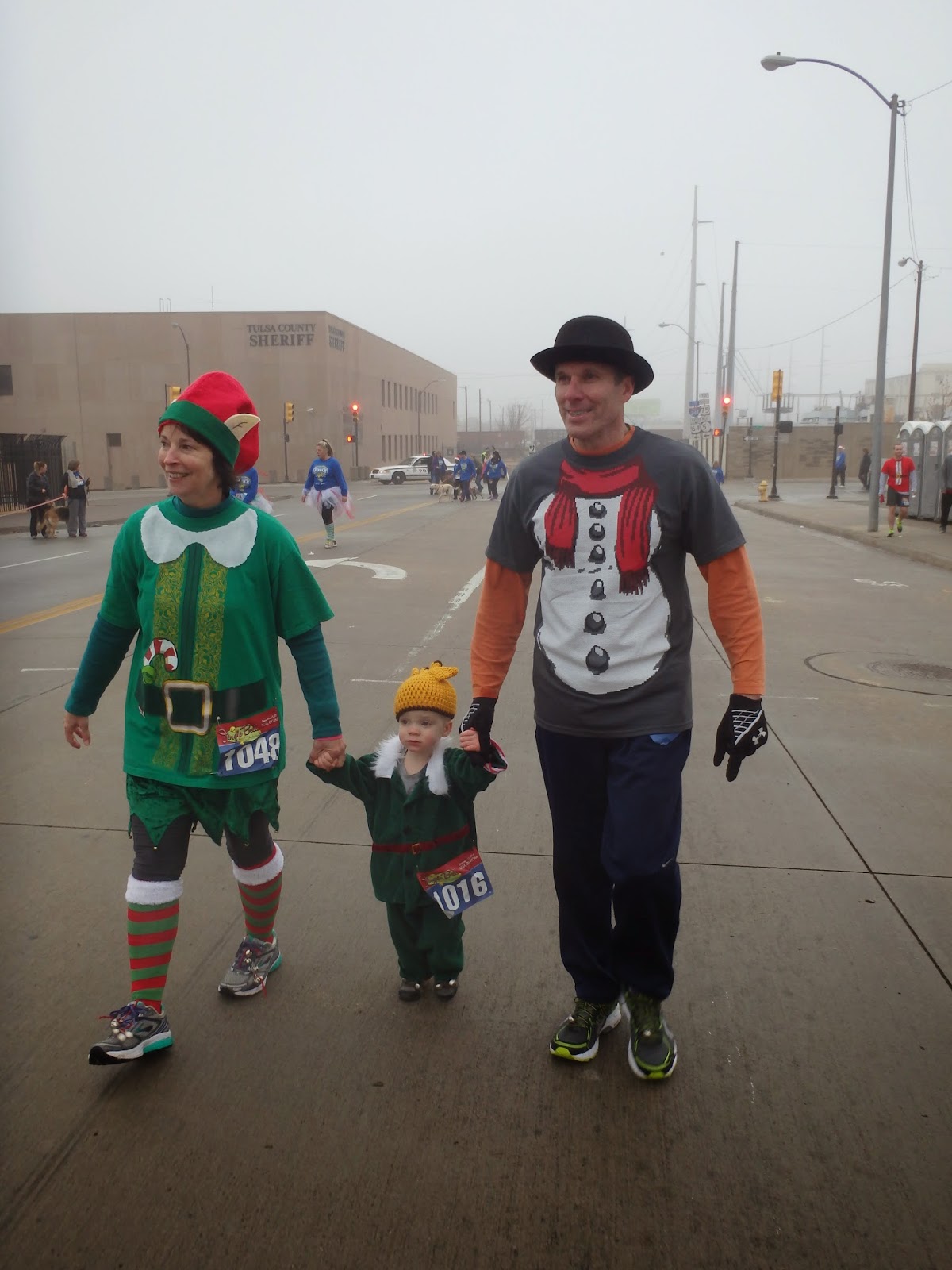 Posted by Liz Runningmomma at 1:37 PM