Monday we had our week 16 doctor's appointment and we got the wonderful, fabulous, amazing news that I have been waiting 4 weeks for!  My doctor's exact words when I asked about the placenta were "Interestingly enough it is up and out of the way."  I could have peed myself and done a placenta jig right there from excitement.  All your prayers, thoughts, and dances must have worked.  Thank you all!  I knew it had to be a good sign that I hadn't experienced any bleeding.  I had a dream I delivered naturally and I felt like my body was telling me something.  But I had to remind myself that I also had a dream that Carter was born on January 2nd and his birthday is December 14th, so I tried not to put too much stock in a dream.  All that worry about the placenta totally overshadowed finding out baby's sex.  The doctor said baby was moving around like crazy and the umbilical cord was in the way so he didn't get an extremely good look, but is 99% sure about what he wrote down on a piece of paper for us.  I'm so excited to find out on Saturday with our friends and family.  Next week I'll be able to use gender specific nouns, how exciting! 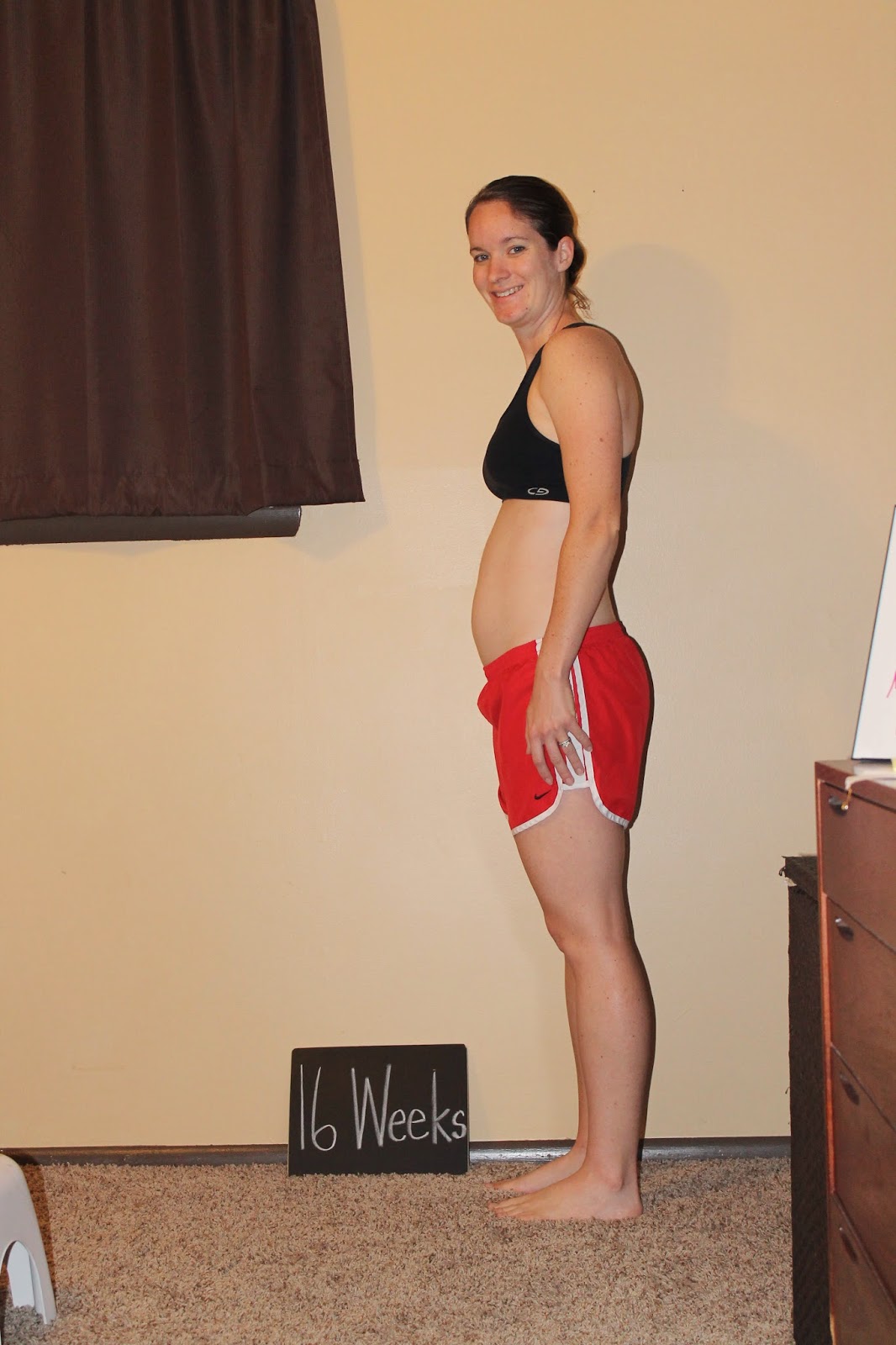 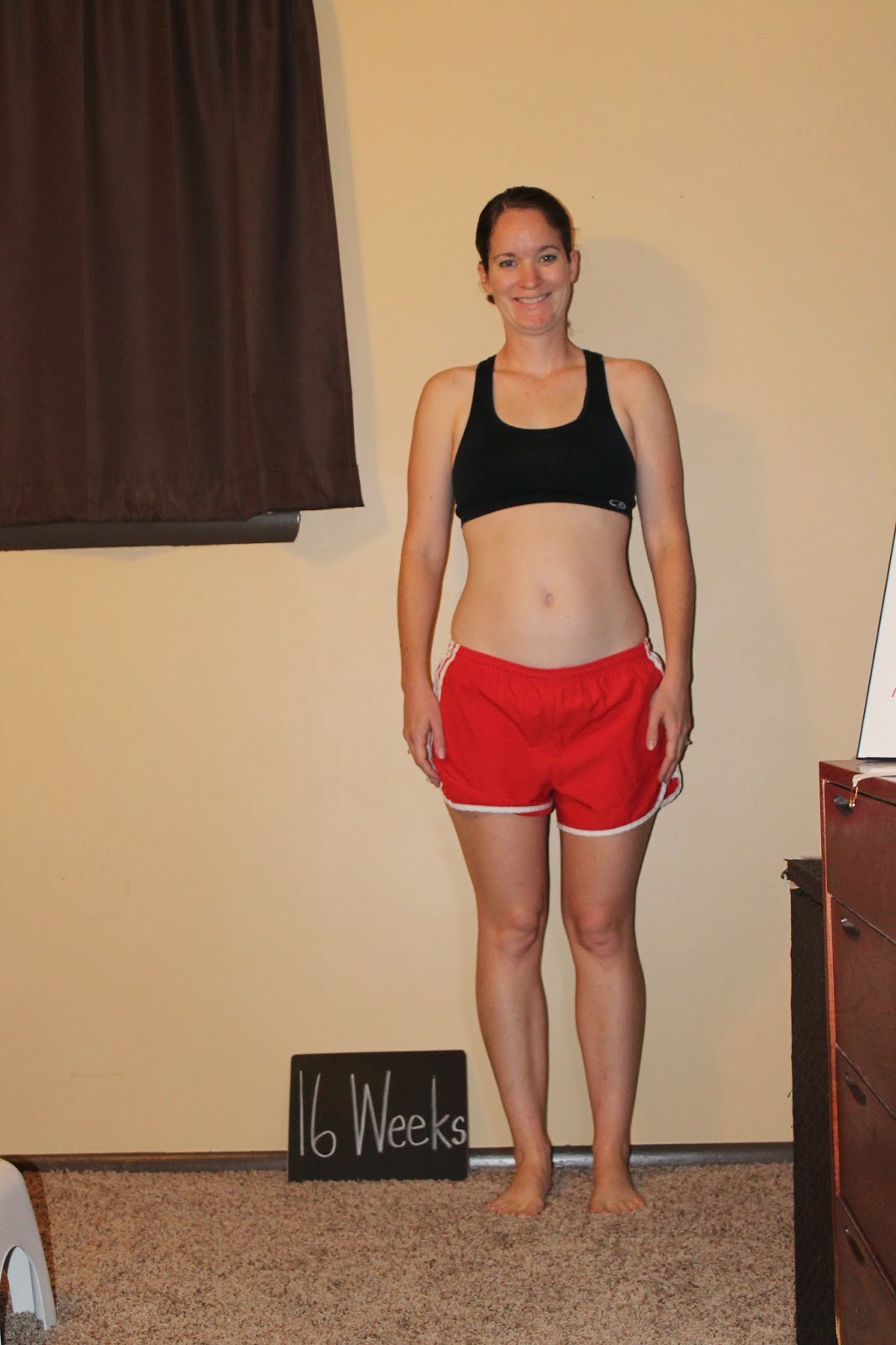 Baby's Size: Baby is the size of an avocado and should measure in at around 4.5 inches.  Baby is growing hair and eyelashes and can hear my voice.  Good thing Carter likes to read so much, baby is already getting exposed to great children's literature!

Weight Gain: Up 3 pounds from my starting weight.  I gained half a pound this past week.  I'm not ready to pack on the weight like that yet, for some reason it is scarier to me this time!

Maternity Clothes: Not only can I not button my jeans, I also can't zip them.  Well, technically I can do both but then my uterus screams out in pain.  I'm using a hair tie along with a super long undershirt so no one will be able to tell I don't have my pants zipped.  I used the belly band yesterday and it wasn't too bad.  It all depends on the temperature and my activity level.  Carrying stuff around out in the heat makes the belly band miserable.  Vacuuming inside or just sitting around the belly band is wonderful.  My t-shirts are starting to get a little bit shorter.  They still cover me just fine but they don't feel quite right and bug me.

Sleep: Sleep is hit and miss.  Some nights I sleep great and others I'm waking up constantly.  I always go to the bathroom at least once.  I pulled out my body pillow and have been sleeping with it.  I don't need it to support my belly yet, but it keeps me from sleeping on my tummy.  That's my go-to sleep position and I don't want to do it anymore since baby goes bananas moving around when I'm on my stomach.  It must be uncomfortable for him/her (I just accidentally typed her there, is that a sign?) so I don't want to do it anymore.

Symptoms: Oh my gosh, so tired!  Still feel like 1st trimester tired!  I don't know if it's because I wasn't as tired during the first trimester as I was with Carter, so I'm just not getting the huge surge like I did with him or what.  This morning Carter was sitting in my lap while I read to him.  We finished a book and he was flipping back through it to look at the pictures again.  I fell asleep and didn't realize it until he exclaimed "Mommy!" so he could point out something in the picture!  I also have been so thirsty this week and felt like I could never get enough water.  I'm still having morning dry heaves, but they aren't consistently every day anymore.  Carter is less understanding and sometimes says mommy and then mimics me which is comical.  He also copies my out of breath breathing when I'm panting from say, carrying him up a hill or something.  My nose is also super stuffy and I have a hard time breathing through it.  My patience is not what it normally is.  I find myself occasionally wanting to yell which is never my go-to response for anything.  Typically it ends up being at poor Harper because I have enough self control not to yell at my baby.  I felt bad today when I heard Carter parrot back, "Move it, Harper!" after I bumped her out of the way while getting his lunch ready.  I think it has to do with how tired I am.  I must be stretching out a decent amount right now because I'm achy.  My hips ache and strangely enough are more sore on days I don't run.  My uterus is so sore right now too.  When Carter sits on my lap and puts pressure on it, I can't help but moan.  I'm ready for it to be stretched up and out so my fundus doesn't get pressed on by so many things: the seat belt, the top of my pants, Carter when he sits on my lap, the band of my shorts.

Running: I really milked having run a half-marathon last weekend and took this past week super easy.  I took the first 2 days after the half off and just went for walks with Carter and Harper both days.  Then I ran either 2 or 3 miles each day depending on how I felt.  There were a few days where I felt completely awful.  I'm talking 10:30-11 minute pace terrible!  Then other days I was rocking a decent 9:30 pace.  My weekly mileage topped out at 12 miles.  After this week, I'm interested to see how next week goes.  We are running a Halloween 5k on Saturday.  I've also hit the point where peeing is getting ridiculous.  I go before we leave the house and then I have to go again when we get to the trials.  Even after those restroom breaks I still feel like I'm going to pee my pants during my runs.  Luckily I never do!  I'm so glad I can run in the mornings because I ran in the afternoon this weekend and the peeing situation was much worse after a day of hydrating.

Food Cravings: I've been all about sweets and dairy this week.  One day I just had to have chocolate pudding and washed it down with a glass of milk.  I always wake up from a nap wanting cheese.  It's crazy how much I want to drink milk!  I pretty much never drink milk, but just can't get enough of it right now!

Movement: This baby is a mover!  I feel him/her moving every day.  When I felt Carter for the first time I felt little flutters and then didn't feel him move again for a week.  I've felt this baby move every day since the first movements.  It's crazy!  The doctor kept commenting on how much our baby was moving during the ultrasound.  Our first view was from the side, then we had a view from the front, then we saw the baby from the back.  While I was talking to the doctor Ty said the baby punched his/her fist in the air.  I'm a little bummed I missed it, but I do feel it!  I didn't feel the movements during the appointment though I feel them frequently throughout the day.  My mom and I were joking that this baby is going to be a wild child.  Carter didn't move quite as much in utero and he is a pretty calm little guy.  He loves to run around but he can sit for extended periods of time and will even want to sit and read 20 books in a row.  I have a feeling this baby is gonna come along and rock this momma's calm little world, ha!

Best Moment of the Week: Our doctor's appointment.  I can't even describe the level of excitement when the doctor relayed good news on the placenta's shift!  Nothing makes me happier than knowing I'll have the opportunity to go into labor and deliver this babe naturally.  I'm still on an excited high from it all!  The baby was moving around like crazy which was fun.  The heart rate was 162 bpm which is still right at 10 bpm higher than Carter's at his 16 week appointment. 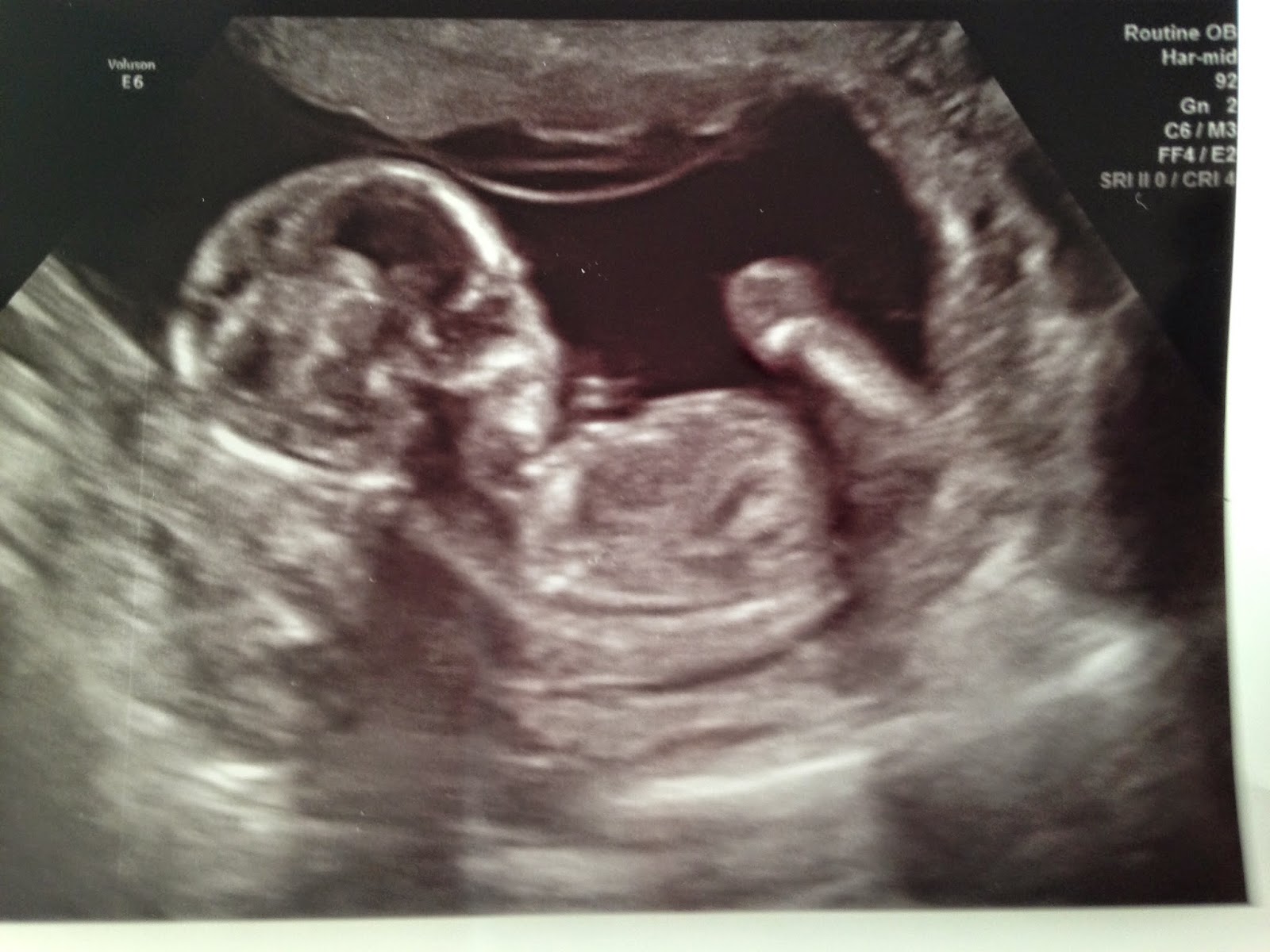 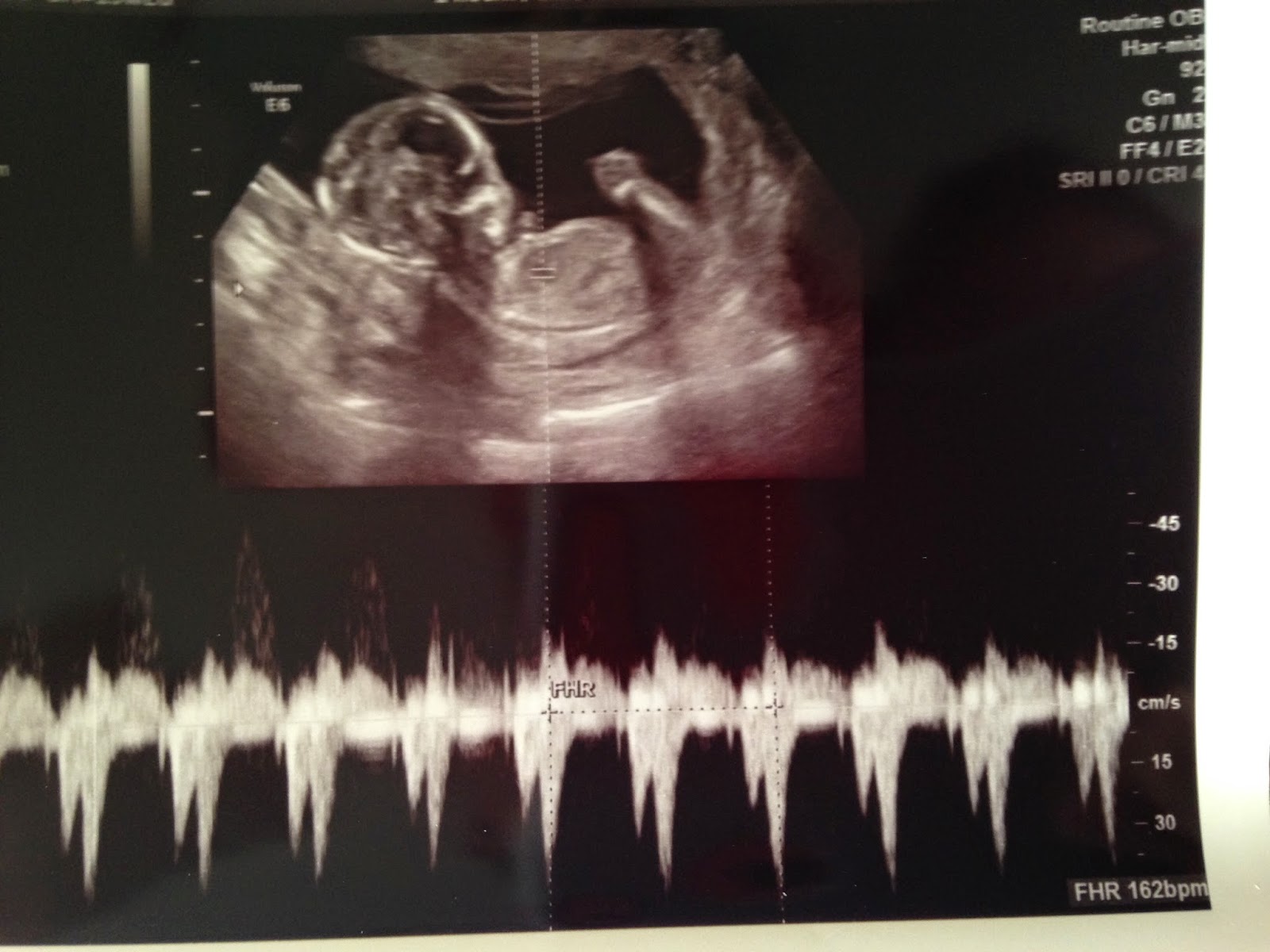 Currently Loving: Looking at pictures of our sweet baby and knowing that soon we'll be able to put a name to that face (if it's a girl, if it's a boy we still have to work on a name).  I'm really looking forward to Saturday and sharing in the excitement with our families!

Miss Anything: I really wanted a margarita to celebrate the placenta's shift.  Such a strange response to pregnancy news!

What Big Brother is Up to This Week: Before our doctor's appointment I told Carter we were going to visit mommy's doctor and I asked him if he wanted to see the baby.  He replied with Yeah, yay!!!!  It was so cute.  Then during the appointment when the doctor first put the wand on my belly you couldn't see the baby on the screen yet.  When he scrolled over and the baby popped up, Carter instantly yelled, "Baby!"  It was the sweetest.  At home I showed him the ultrasound pictures and he said baby.  Then I asked him where the baby was and he lifted up his shirt, pointed at his belly, and said "Caca".  I assume meaning that the baby was in Carter's belly.  It was so cute!  My Week 16 Bumpdate with Carter. 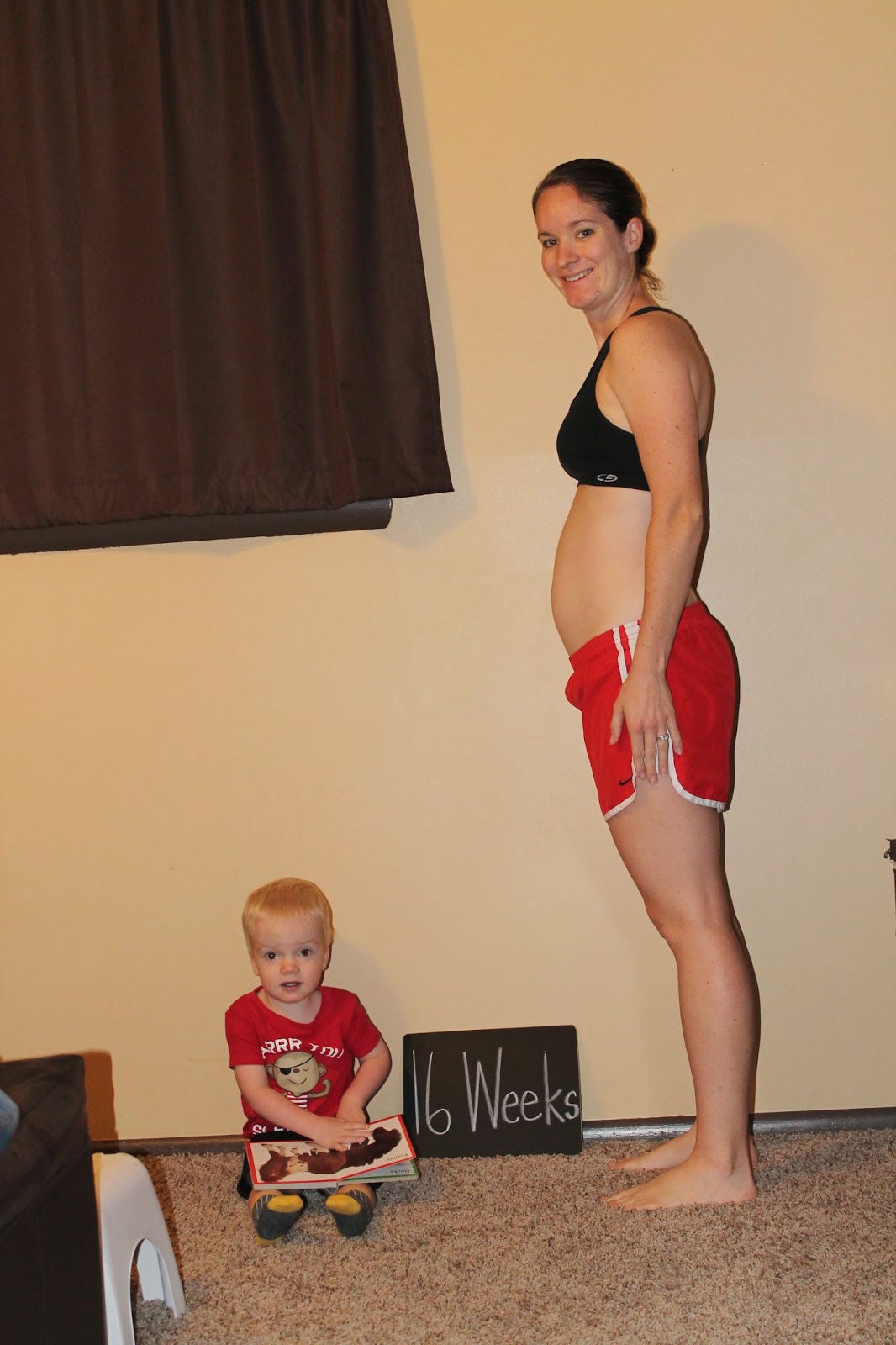 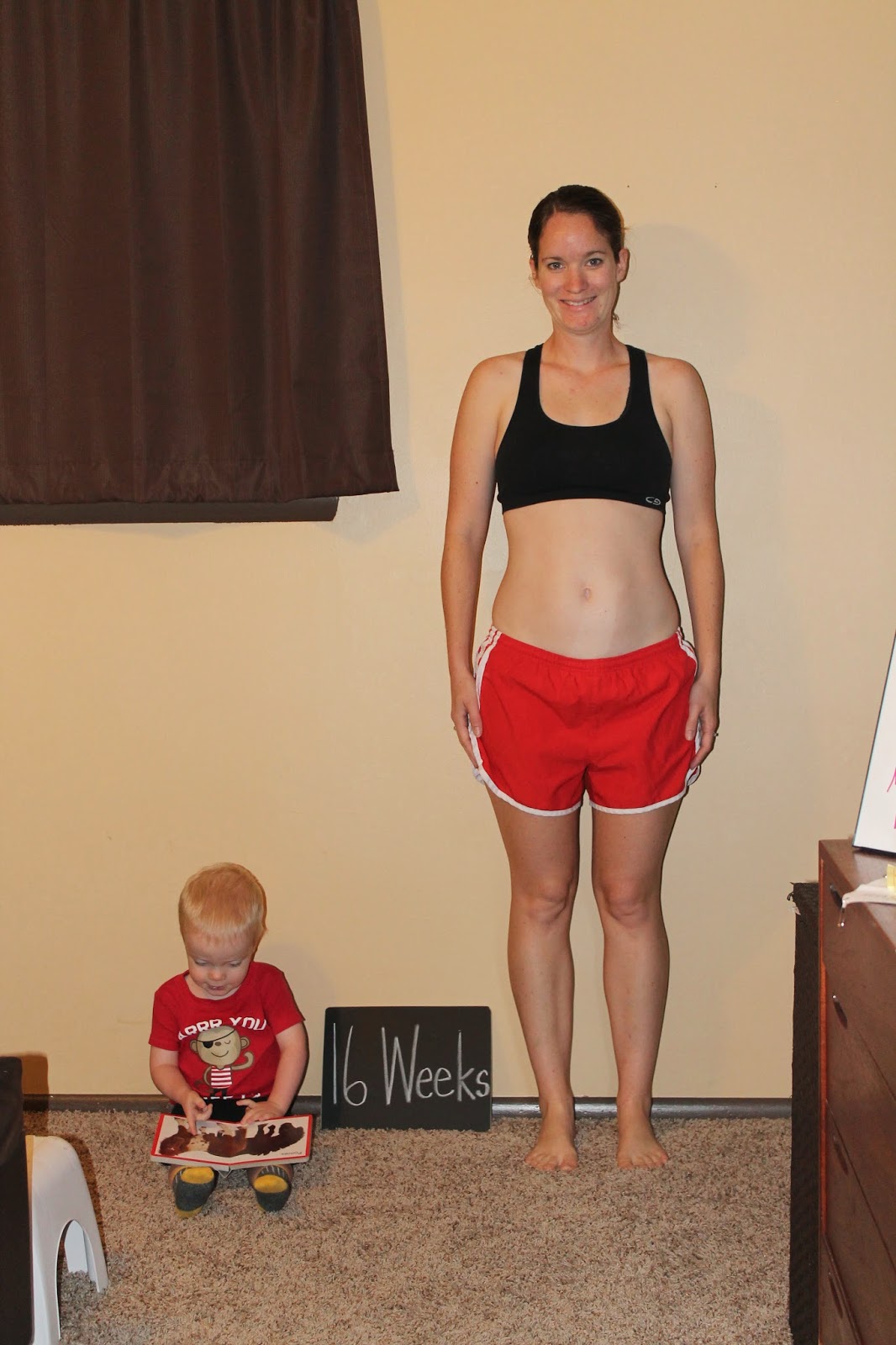 Posted by Liz Runningmomma at 12:09 PM