I learned from the Armadillo Trail 25k that even if I'm not attempting to run a fast time in a race, I should still respect that it is a race. I wanted to run a 15 mile long run the Saturday before the Firecracker 5k which was on a Wednesday. I didn't want to overdo it like I did with the Armadillo race so I decided to go ahead with the long run but to run it really easy. It worked out great because I planned to run closer to 9:00 pace for the 15 miler and I was able to hook up with some training buddies who run around that pace for long runs which kept me from running too fast. After Armadillo I decided it's just a better idea to hold back a little during the leadup so the race can be fun instead of a huge challenge.
The morning of the race I slept until 6:30. Once I was ready I ran to the race start as my warm up. I added a little extra so I could run a 2 mile warm up. My legs felt really good on my warm up and I started to think I might surprise myself and bust out a sub-21 minute 5k after all. I was hoping to be around 6:45 pace which would be under 21 on an exact course but since it's pretty much impossible to run exactly 3.1 even on a certified course, 6:45 pace wouldn't get me under 21. I found dad in the parking lot as I did some of my dynamic stretches and got my bib. Then I headed in with just enough time for a restroom break before heading to the starting line. Jeremy, Thomas, and I all lined up together and worried about dad because he hadn't made it to the start yet. At the last moment dad showed up.

We took off at the start and I was struggling from the gun. I just couldn't really find a rhythm and my legs felt weird. Jeremy was quite a ways ahead of me and Thomas was between us. I caught up to Thomas after a little bit. There were quite a few girls ahead of me at the start and I slowly started picking them off after the first quarter of a mile. Usually I run with Jeremy for the first mile of the race but he already had a decent lead on me by the half mile mark. I could tell it probably wasn't going to be my day. I looked at my pace a couple times in the first mile and I was running 6:40-6:50 pace when I looked. We hit the cart path at about 3/4 of a mile and I finally started to feel like I was getting into a groove. I figured I was just having a rough start to the race. We went up the only hill on the course and I picked off the last 2 women ahead of me and focused my eyes on a pack of men running together in front of me who Jeremy was also gaining on. My first mile was 6:47. I told myself if I could run 6:44 pace for the next 2 miles I could still average 6:45 pace. As I came up on the end of the first lap I saw mom with the kids and was super excited to see them. Carter looked like he wanted to take off running with me which was cute. I always love hearing them cheer for me. I was surprised they made it so quickly because when I left the house for my warm up they were still in jammies.
During the 2nd mile I tried to push but didn't feel like I was able to maintain pace. I was surprised when I went through the 2nd mile in 6:44 which was exactly what I'd hoped for. Now all I needed to do was maintain pace for the last mile. I have always loved this course which is 2 laps on the golf course with about half the race on grass and half on the cart path. I actually ran my fastest "road race" 5k on this course years ago. So I was surprised how much the grass portions of the race were slowing me down. I'd check my pace on the paved section and I was running in the 6:30's but when we transitioned onto the grass my pace would slow to 6:50 which was discouraging but also left me confident that I could have run a faster time on a different course. I told myself to just make it to the next section of pavement. In my head I kept repeating, "Just make it to the pavement," over and over. I focused on the guy closest in front of me and told myself he was going to be under 21 minutes and if I wanted to finish in under 21 I needed to catch him. But then I was realistic and knew that he was likely going to be over 21 minutes and if I wanted to be under 21, I needed to catch up to Jeremy and he had a huge lead on me. It turned out I was right as Jeremy said he ran a 20:53! 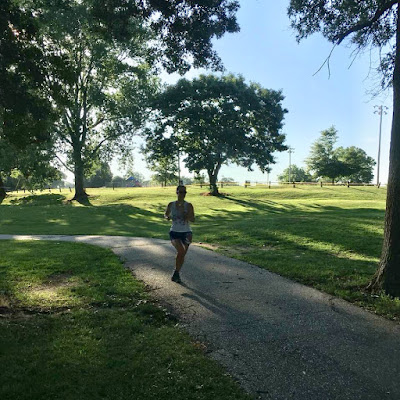 As my watch beeped for the 3rd mile, which I ran in 6:51, I looked toward the finish line and was pretty sure the race was going to be long because it looked like I had more than 1/10 of a mile to go. It turned out I was correct as my watch registered 3.17 miles and everyone I talked to had 3.2 on their Garmins. I rallied on the finishing stretch for 6:17 pace. I turned around and watched Thomas finishing pretty close behind me. My mouth was really dry and as I started to cheer for him I wasn't able to get out his whole name as I yelled, "Go Thomas," because I started dry heaving. I was a little embarrassed I was dry heaving after the performance I had but I think it had more to do with how dry my mouth was than having run really hard. After the race I was talking to Jeremy about how much I struggled with the grass portions of the race and he said he did too because they hadn't recently mowed the grass and it was pretty long. When he said that, it made a lot more sense!
They still haven't posted results from the race so I'm going off the times they announced during the awards ceremony. I finished first female with a time of 21:29. Jeremy was 2nd in his age group with a time of 20:49. Dad placed 1st in his age group with a time of 25:16. I'm not sure what place Thomas was in his age group, but he wasn't in the top 3. I'll add his time if he knows what it was but it was somewhere not too far behind me so probably under 22 minutes. Mom stayed with the kids to cheer us on and Ty was at home because he only got the 4th off so he didn't come with us. Following tradition we went to McDonald's after the race. Read about last year' race here, 2016 here, 2015 here, 2014 here, and 2013 here.

Posted by Liz Runningmomma at 2:09 PM