Saturday was the next race in our summer evening race series. Ty sat out the race in June so it was my turn to sit out this race. I didn't mind because I ran a mile time trial on the track that morning which was fun and had a long run the next morning with Thomas. Since Ty is so sweet, he's sitting out 2 races and I get to run another 10k in August. Hopefully I'll be able to run it a little faster than the one I ran in June. Since I was just over 44 minutes, it would be cool if I could break 44 but it will also likely be much hotter than the June race so we'll see what happens. That morning Ty took the kids' car seats out and washed them. When he put them back in the car we switched Carter over to a high backed booster and Elise got to switch around to forward facing. Rear facing is the safest position so it is recommended to keep your child rear facing until they outgrow rear facing in their car seat. Elise's seat allows rear facing up to 40 pounds and/or 40 inches. She's no where near 40 pounds but she's just over 39 inches so I felt it was safer to turn her around then chance her outgrowing the car seat's rear facing capacity while still rear facing. I thought Elise might be disappointed she couldn't see Carter anymore but she was super pumped. She loved that she got "a new car seat like Carter," although neither of them got new seats. She also liked being able to see me and wants to play games with me in the car while I'm driving! I'm still getting used to it because she'll talk about something she sees and I'll look behind us before realizing she can see the same things I can. 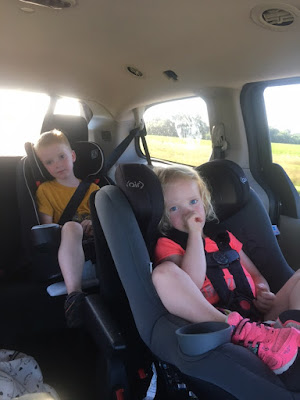 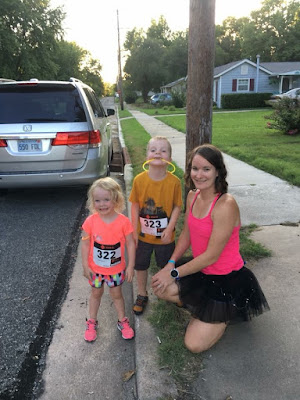 Elise fell asleep for a late nap and was still napping when it was about time to leave for the race. I had a hard time waking her up and she was a bit grumpy in the car. By the time we got there she was more awake and ready to party. She had refused dinner before we left so she did get hungry on the way home from the race. The fun run started first and Carter wanted to run by himself. Elise wanted both Oma and me to run with her. I was standing with them at the start but then remembered during the Starry Night Fun Run Ty had taken a video of the kids starting the race so I went to go get a video while mom started the race with Elise. The announcer tried talking to Elise at the start and she was not having it and decided she didn't want to move. I had told her if she didn't want to do the race that was fine, but if she wanted to do it she needed to either walk or run. I wasn't going to carry her. After walking for a ways she kept asking me to carry her and I told her we'd just go back then but she insisted she wanted to do the race. I carried her for a little bit and then she was good to walk the rest of the way. We saw Carter coming and got so excited. We cheered for him and he stopped to give me his light up bracelets which he'd put together to make a necklace. After Carter went by Elise wanted to turn around so we turned around early. She walked all the way and then wanted me to carry her across the finish line. I had asked Jeremy to check Carter's finishing time for me if he was at the finish line so right after I finished with Elise he came over to tell me Carter had finished in 11:02. He's pretty consistent with his times. If he'd start a little slower so he wouldn't need to walk, he'd run faster but he's having fun and that's all that matters! 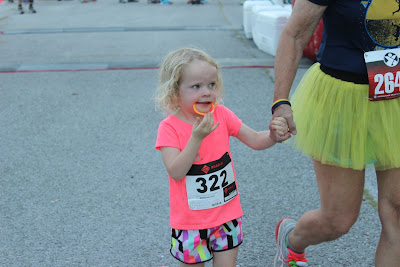 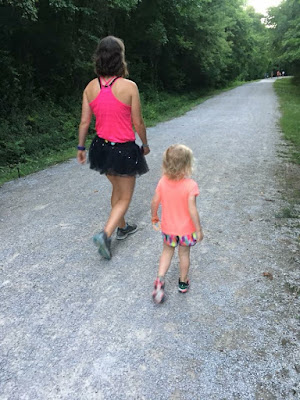 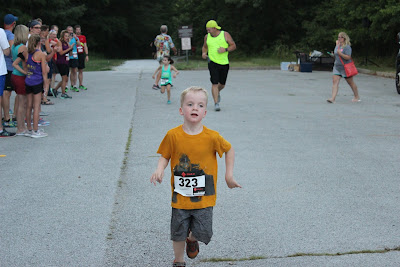 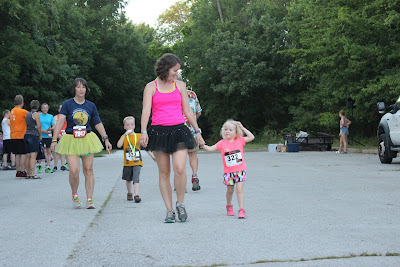 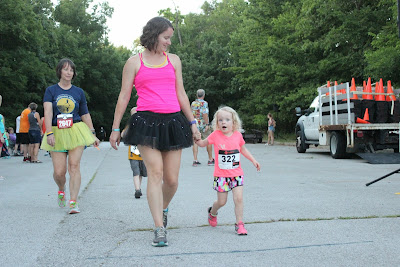 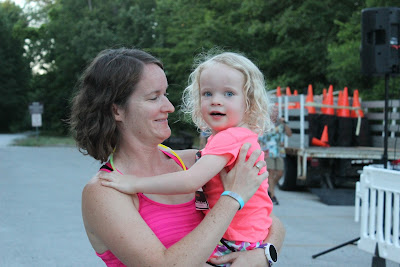 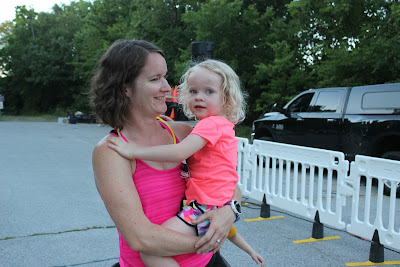 The best part of the race for the kids is getting ice cream afterward. At the Starry Night Ty stayed to watch the 10k start and then took the kids home so they could get to bed not too long after bedtime. I was tempted to watch the 5k finish before heading home but decided it was probably best to leave after the start of the 5k. It cracked me up that Elise walked the whole race but then ran around like a wild woman after the race while we waited on everyone else to start their races. She and Carter found a little boy to play with and were running circles around the parking lot. The kids had a lot of fun playing and dancing before cheering everyone on at the race starts. 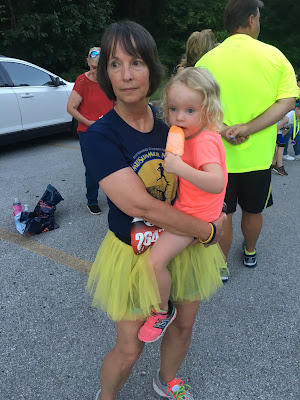 The 10k started before the 5k, at 8:20. We got to watch them take off and Ty looked really strong and determined. After we got home I kept checking the supposed "live results" to see how everyone had done and they weren't up yet. Finally around 10:00 they had them posted and I saw that Jeremy was 5th overall which surprised me because he'd finished 2nd overall in June. But then I looked at the times and realized they had accidentally put a couple 5k runners in the 10k results as there was no way anyone had run a 20-something 10k! Jeremy was 3rd overall and 1st in his age group with a time of 44:24. Then I searched to find Ty and I couldn't believe it when I saw he'd finished in 55:08! I was pretty sure that was a huge PR so I searched and found that it was a minute and a half PR! I couldn't believe it!!!! He was just hoping to finish in around an hour. He finished 14th overall and 5th in his age group. I tried calling him and he didn't answer so I just kept calling people in my family until I finally got someone and was able to talk to Ty. He said he'd had an awesome race and felt really good. He had a woman he was pacing with who was also hoping to run around 9 minute miles and eventually was able to get a ways ahead of her and ran with someone else for a bit before kicking it in to the finish. Mom said no one had seen Ty coming in because they weren't expecting him yet and Jeremy yelled out that he was coming. They all looked and said he was really hauling it to the finish line. I looked at his Strava later and he'd finished the last 0.2 of the race in 6:40 pace! That was 2 minutes and 14 seconds under his average pace for the race. I calculated that to have run that much under pace as my finishing kick, I'd have had to run the last portion of the Starry Night race in 4:52 pace. There is no way I could ever even run a tenth of a mile at that pace. I was so impressed. Then I looked back at my finish at the Starry Night 10k and I'd run the last 0.2 in 6:54 pace so he beat my finishing kick. He said he would like to see his finishing pictures because he probably looked rough. When I saw his picture I said it would actually be a really good finishing picture for me. We laughed at how I looked like death in my finishing picture from the Starry Night when I ran over 2 minutes slower than my PR and Ty looked really good while running a minute and a half PR! I guess we can't all take good finishing pictures...

The 5k started about 15 minutes after the 10k. Thomas tried to pass stuff off to me before the race but I reminded him I was leaving before he would finish. I knew Thomas was likely to run something surprising because he's been putting in a lot more training than usual. Since he's training for a marathon and is serious about getting in appropriate mileage so the race doesn't suck for him, he's been sticking to a training plan. He's said he had no idea how much long runs help by making you stronger, even for a 5k. After the Firecracker 5k when he was only around 30 seconds behind me, I realized if he keeps training I may not be able to beat him in races anymore! He said he had a strong first mile and then in the 2nd mile was passing so many people he didn't realize he'd slowed down quite a bit but was able to pick it up in the last mile. He finished in 21:02 which put him 6th overall and 1st in his age group. My mom was super impressed and he reminded her that he's actually been training. Normally he does races without running much beforehand. She'll have to get used to him running decent times again! Dad finished in 24:06, his standard finishing time since being diagnosed with COPD, which put him 24th overall and 3rd in his age group. Mom finished in 34:38, good for 120th overall and 2nd in her age group!

I was laying in bed reading a little after 10:00 when all the sudden Elise's face appeared above my book and made me jump. I scared her a little bit but then I laughed so hard. She ended up not falling asleep until around 11:00. Darn that long, late nap! I thought it would be a good thing because she would be able to stay up for the race but she was able to stay up way too late! She was still awake when everyone got home. I was proud of myself that I didn't even get bummed about not running the race when I saw that I could have just jogged either the 10k or the 5k and finished top female. It would have been a race I could have run as an easy training run and still won. Which is crazy because at the June race I couldn't have won the 5k even if I'd been racing. The top finisher ran an 18:46 at that one and I'd have to be in top shape to run a time like that! That's the thing about these evening races, you never know who's going to show up! Ty's excited with how his race went and said he just needs to run that pace for over twice as long to hit his goal of a sub-2 hour half-marathon. I told him I always run a slower pace at these summer 10ks than I do in my goal fall half-marathon. In 2016 I averaged 7:15 pace for the 10k in August and then ran 6:58 pace for the half-marathon in November. So even though it sounds like a crazy goal to him now, I think it is totally attainable if he puts in the work!
Posted by Liz Runningmomma at 3:20 PM