This school year will be bringing some big changes for our family. Carter will be starting kindergarten, I will be returning to work, and Elise will begin her journey toward school with a preprek class. It's hard to believe the kids are old enough to be hitting these big milestones, Elise starting school and Carter starting big kid school! I'm excited and nervous about the changes. Things will be so different. I'm still a little bit in denial that Carter will be in school 5 days a week so I won't have any weekdays with him at home to play with me! He has to wear a uniform and I have yet to buy anything. I feel like I'm putting it off because I want to believe it's not almost time to start school but I really need to get on it!
Oklahoma gives report cards to schools, ranking them A-F based on various different factors including state test scores, attendance, and parental satisfaction, to name a few. The school down the street from our house is ranked an F. I just couldn't bring myself to send Carter to school there. We talked about moving into the district I used to teach in as it is not just the best district in the area but the state! But we weren't really in a place to move. I started looking into our school district's magnet schools and was interested in the ones with Spanish immersion programs. We decided on one and were lucky enough to get in through the lottery system. Carter will be going to kindergarten at a school with a Spanish immersion program and his elementary school was given an A+ score. That means when he goes to school his teachers will only speak in Spanish and he will learn the language through being immersed in the language day after day. I think it will definitely be hard at first, especially because school has always been easy for him but this will be challenging. We are prepared for some struggles the first few months. Carter is excited about it and talks about how next year he will go to a Spanish school so I'm hopeful he will adjust quickly.

Carter started at the church preschool when he was Elise's age. His first year of preschool he went twice a week for half a day. Ty and I talked about what to do with Elise. I wanted to start her the same way we had Carter, twice a week for half a day. But I just hated having both my kids in school and not having a job. I went back and forth and decided I was just so ready to bring in an income again. We've been doing fine on one income but it is hard and I was ready to make things easier. I talked to the director at the school and was offered a job for the following school year. So Elise will start her first year of school with 3 full days but their school hours are 9:30-2:30 so it isn't a full school day. I had no worries about it because she had always done so well going to her classroom during church. But then we did VBS which was just 9-12:30 and she really struggled with it. After 2 days I had a hard time getting her to go to her classroom and on the 4th day she wouldn't go at all. I'm hoping since school will be Tuesday, Thursday, and Friday she will do okay because she will only have 2 days in a row. Ever since VBS we haven't been able to leave her in her Sunday classroom so I'm hoping we can transition back into it and that will make school easier for her. 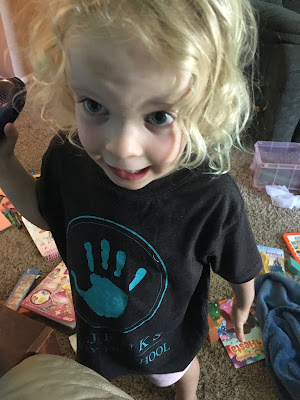 I am excited about being at the preschool next year. It will be the perfect way to transition back to the classroom. The preschool will be very relaxed without the high expectations and stress of a public school classroom where such a huge emphasis is placed on test scores and, especially in first grade, reaching a certain reading level by the end of the year. There will be no report cards and no required parent/teacher conferences. I won't have as much work to complete as far as lessons and room prep goes. When I thought about going back to work I didn't want to spend precious weeks of our special summertime together in my classroom preparing for school. With this job, I won't have to. It is also perfect because I will still have 2 days a week home with Elise. Carter's school hours are 8:30-3:30 while Elise and mine will be 9:30-2:30 so it will work out perfectly with dropping him off and picking him up. Plus since I'll be working at the school, Elise's tuition will only be $60 a month!

I know it will be a difficult transition for me and Elise as we've never really been away from each other. When she goes to Sunday School for 2 hours on Sunday I miss her and am so ready to pick her up by the end. It was harder in a way with Carter but easier in a way as well. Even though he was my first baby to go, I still had Elise with me. Plus we'd had that time when I was still working while he was little apart. With Elise I will be with lots of little kids and none of them will be her. I've also been with her from the day she was born with no real time apart so we are very attached in that way. It's interesting to me how I can be so incredibly attached to both my babies but in different ways. I don't know if it would be easier with Elise is she weren't my youngest but it is hard going through something for the first time with Carter and then turning around and doing it for the last time with Elise. There are so many things about being a mom that are hard. I keep telling myself the first few weeks will be hard but once we get used to it and get into the swing of things, it will all work out.
Posted by Liz Runningmomma at 11:21 AM