Carter had been eagerly anticipating this race since he finished his last one. He even made sure I packed his light up shoes so they could light up while he was running. He planned that out weeks ahead of time. Going into the run Carter insisted he wanted to run by himself. He kept telling me he didn't want to run with me and asked if he could run by himself. I told him that was fine. When it was time to line up at the start he wanted me to go over with him but still said he wanted to run out far ahead of me. I told him that was okay, I'd just run a ways behind him in case he decided he wanted me there. He lined up pretty close to the starting line and Elise was toward the back with my mom. She saw Carter and wanted to line up at the front with him. It was so cute watching them standing there together anticipating the race. Carter was so excited and was acting like a pro after the Starry Night Fun Run in June. We stood waiting for a while and Carter talked to some people around him. He kept telling other kids that he was running the race by himself. He would point me out and say I was his mom but he was going to run ahead of me.
When we took off at the start I made sure to give Carter a sizable lead and stayed back a ways behind him. Carter looked back for me a few times and reminded me to stay behind him. Then an older boy ran by with 3 glow bracelets hooked together to make a necklace and handed it to Carter. Carter wanted it but didn't want to wear it so he passed it off to me and I wore it for him the rest of the race. It was around that time when he didn't mind me running with him so I went ahead and got up beside him. He was a little unsure about where to turn around so I reminded him we'd turn around when we got to a cone with a lady standing near it. The starter had announced the woman's name for the kids so Carter said, "Thank you, Nancy," as he ran past her. It was so cute. I started my Garmin for the race just for fun and at the start Carter had been running 8:55 pace but was averaging around 11:15 pace pretty much the rest of the way. I was impressed with how consistently he was running. He had said he wasn't going to walk at all this time and he didn't. Not even when a boy stopped right in front of him and Carter ran into him and fell down, he just popped back up and kept running. Not even when he slid on the gravel and almost fell, he just kept running along! 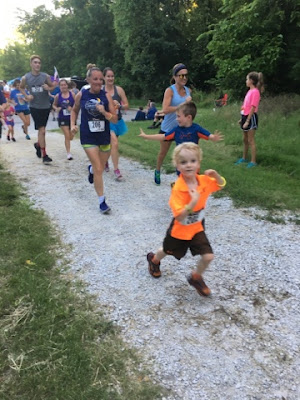 Shortly after the turn around we saw mom and Elise headed in our direction. Carter got really excited and started to cheer for her so I yelled for her as well. Pretty much immediately as she heard us cheering she was ready to turn around. They made it a little bit further out and were pretty close to the turn around before Elise decided it was time to head back. Mom told us next time we need to not cheer for her and maybe she'll run the whole way. Once she sees us, she wants to be running the same way we are! I was so proud of Carter and how great he is at pacing himself. It just comes naturally to him. He'd rather run a slower, more sustainable pace than run fast and then walk like a lot of the other kids. One girl by us would take off sprinting every time Carter passed her but then would get a ways ahead and start walking. She did that the entire way back and I saw her crying after the race. Carter was just eating his ice cream acting like it was another day at the park. 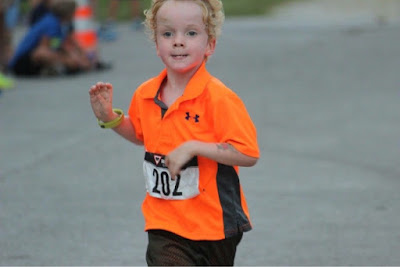 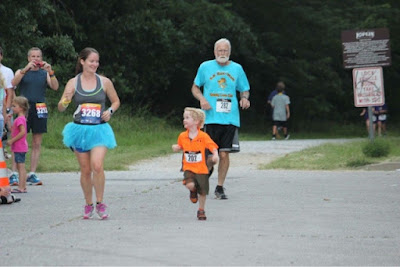 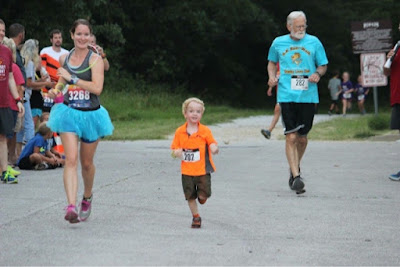 Carter finished the mile in 10:58, a 17 second PR, and immediately headed off to get some ice cream. I went back out to finish the race with Elise. Carter saw her coming and went over to the announcer to tell him his sister was getting ready to finish. It was so cute and he was just so proud of her. As we neared the pavement Carter met back up with us to run Elise in to the finish. Once again Elise's glow bracelet fell off as she was kicking it in to the finish so she had to turn around to pick it up. It cracked me up just as much this time as it did last time! As we neared the finishing area everyone was clapping for Elise. It scared her a little bit this time and she wasn't quite sure she wanted to finish. My mom bent down and held her hand so she kept on running. She was really excited to see Ty as we ran past him. I'm just so amazed by Elise's love of running and her ability to pace herself and not get upset by how many people are ahead of her. She takes off at her pace and just trucks along at that pace. She doesn't even let it bother her when other kids impede her during the race. My mom said there was a girl running near them who kept cutting Elise off and telling her, "I'm going to beat you." Elise just kept bouncing along. I am so proud of my babies and love that they enjoy running, although I would love them even if they didn't! 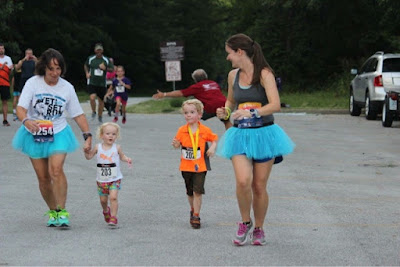 Posted by Liz Runningmomma at 2:20 PM