We woke up to rain this morning that slowed down by the time we ran the Firecracker 5k. Without the rain it was humid so we were pleased when it started to drizzle a little as the race took off. I spent most of the morning attempting to get a picture of the kids together in their patriotic gear. After the race Carter was playing in puddles and Elise refused to cooperate for pictures. Eventually I was able to get Elise to stand in a picture by giving her my medal. Carter was so wet he needed a clothing change so by the time I got the kids to pose for pictures he was wearing different pants. And they'd been playing with sidewalk chalk so their clothes were covered in chalk. All the craziness aside, I did finally get a picture where they were both looking at the camera and smiling! If at first you don't succeed, try, try again, bribe, try again, bribe, try some more, haha! 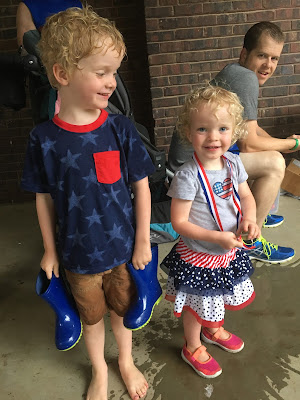