Carter: I've been having this dream for years. You know what?
Landon: No, you must tell me!

One day Carter came out of his room and said, "There's a spider on my squirrel!" I looked up to see him holding a toy squirrel with a spider sticker stuck to its tail.

Carter: Brylee, do you wanna hear something cool?
Brylee: Yeah!
Carter: I can jump over my dog!


I was making dinner while the kids played in the other room. Carter came running in to tell me something.
"The picnic basket told Elise to find something orange and she yelled at it, NO!"
I was dying laughing over this one, especially because he thought it was so funny he ran in to tell me.

"Turn up the valium, please!" when a song he likes came on the radio.

Carter woke up from his nap and was talking to us as he walked out of his room.
Carter: Did anyone think of words that rhyme while they were sleeping?
Me: No, did you?
Carter: Yes, which and whale!
"We are out of bladder to make doughnuts."

"Why didn't we get to see a giant puppet today?"
After leaving a Talking is Teaching event where they normally have people dressed in a costume of one of the characters from a children's book.

Carter was playing a game with his Gma where she was pregnant and ready to have her baby. He kept telling her not to push yet. It was so funny.

Isaac: What is your favorite animal you're excited to see?
Carter: A binturong!
Isaac: What, that's not a thing!
Carter: Yes, it is. It is a bear cat and lives in the Lost Kingdom.

"Don't chase it or it will charge at you. That means it will run at you really fast like it's going to hurt you!" Carter said this to a friend who was chasing a peacock at the zoo.

When we were hiking at Turkey Mountain Carter randomly said he smelled hot dogs and then we spent the rest of our hike with him leading while "tracking" the smell.

Almost every time Carter plays Play Doh he ends up making cookies for Santa. This time he put the cookies on a plate and set them by the fireplace with a glass of milk. He then wanted to play Santa and told me he was Santa Claus and Elise was Sissy Claus. He said they can get so much work done because Sissy Claus sleeps during the day and is up at night while Santa sleeps at night and is up during the day. So I guess we now know Santa's secret to getting out all those presents. We should've known it was a woman behind it all! 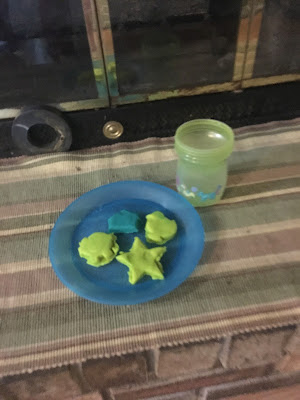 Carter seems a little confused about what the process is for having children. He thought he could have kids with Elise as the mommy and him as the daddy. I told him that he couldn't have babies with Elise because she is his sister and there would be problems with the babies since their genetics are too much alike. He asked who would be the mommy of his babies then and I said that I didn't know, he'd meet someone when he's older. Now "meeting someone" has taken on a different meaning for him. He asks Uncie Taco and Uncie J why they haven't met anyone yet and when he was playing with Gma that she was pregnant he said he needed to go tell the boy that she met that their baby was being born and he was referring to Gpa. It's so funny to hear him talk about it. Some day we will have to explain further!

While reading a book she pointed at the picture and said, "The kee ca is sleeping!"
Me: Who's momma's cutie?!
Elise: It's me!!!!!

Whispering to her Owlette figurine, "I love you."

Me: Who's momma's pretty girl?
Elise: Carty.
Me: Then who's my handsome boy?
Elise: Daddy, Taco, J, and Carty!

We were at the swimming pool and they had toys out. Elise grabbed a swim noodle and started rolling on it beside the pool like it was a foam roller!

When we got home from driving Ty to work in his car I asked Carter where his shoes were and he said Elise had them. I looked over to find her wearing them. 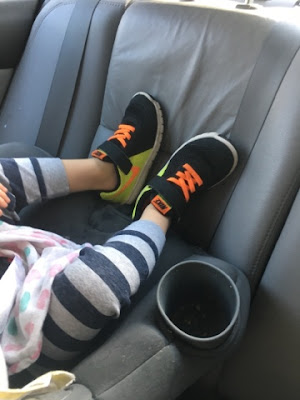 Posted by Liz Runningmomma at 12:59 PM