We did our beach/ocean learning theme before our trip to Florida. While we were in Florida the new sea turtle exhibit at our aquarium opened up. We were super excited about it as the aquarium has had the sea turtles behind the scenes in holding tanks for years and they have been working on the exhibit for a long time now. I decided it would be perfect to segue into sea turtles right after our learning theme about beaches and the ocean. It worked out great because we'd already been playing in sand and the kids had seen beaches just like ones where sea turtles lay their eggs. We have since been to the sea turtle exhibit 3 more times and it's the kids' favorite exhibit at the aquarium. They usually spend about half of our trip there. It's so neat to hear Carter, the resident expert (as I jokingly call him because he's always sharing random facts with people we see there), rattle off information about the sea turtles as we observe them. My favorite is that an adult sea turtle can hold it's breath for hours at a time while it is sleeping underwater. Typically when we go one of the turtles is active and the other is sleeping.

5 little eggs laying in the sand.
One turtle hatched and crawled to the sea.
He switched it up from sea and beach. He kept going until all the eggs had hatched and made it to the sea. 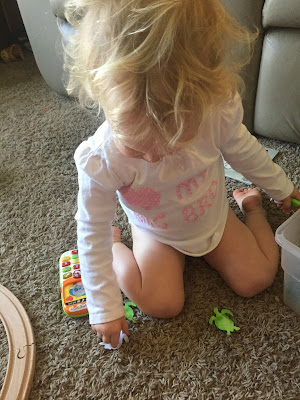