Monday was our last day in Florida. I had planned a 6 mile run in the morning. I set my alarm early just like I had been doing every day and headed out. I wanted to run one last time on the beach. I absolutely love the beach. When I look out at the vast expanse of water in the ocean, it reminds me of how large this planet of ours is. I think of all the different pieces of land the ocean touches and how we are all connected even though we are all so far apart. Then as I watch the waves crash into the shore I am reminded of how we orbit around the sun and I am in awe of the amazing universe we are apart of. Being near the ocean everything seems to make more sense. I feel so small but apart of something so big, powerful, and meaningful. It is a magical feeling for me. So off I went to the ocean and I got to watch the sunrise for the first time. Every other day it had been too cloudy to see the sun rise over the ocean, but this morning was clear and beautiful. 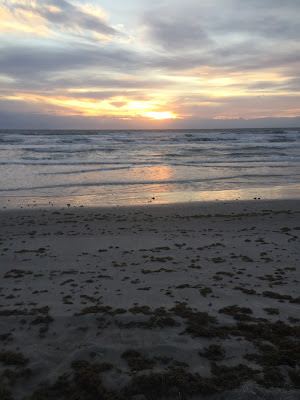 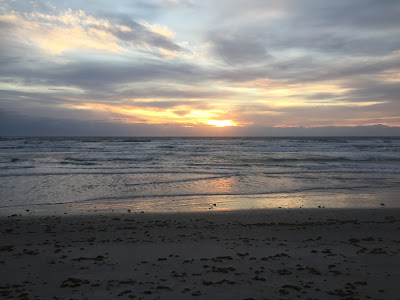 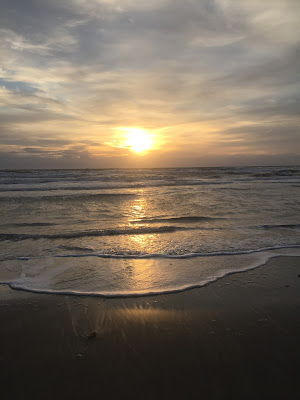 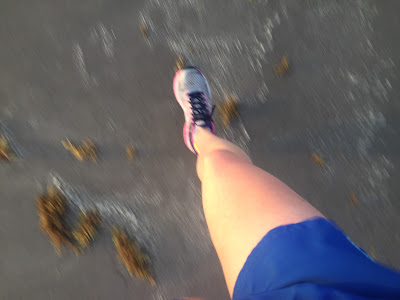 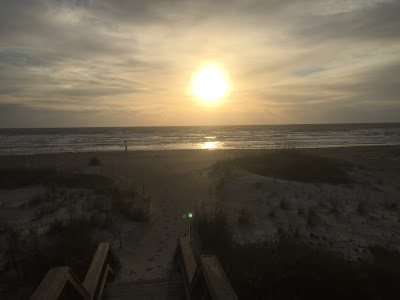 I wanted to do my entire run on the beach but I knew I needed to get some miles in on the roads to knock the sand off my shoes before packing them so I then headed to Snug Harbor where my grandpa had told me I might catch a glimpse of a manatee. Although I was unsuccessful in that endeavor, I did enjoy seeing the houses and looking out at the river. As I ran back toward my grandparents' condo I didn't feel like stopping. It was my last run in Florida and I wanted to run back by the river again so I ran on to 8 miles and then added some as I ran on the pier by their condo, looking out at the river. It was so freeing to be able to run alone and without worrying about being back at a certain time. Normally I'm stressed when I run in the morning because I worry any misstep will cause Ty to be late for work. I got back to find the kids had been awake for about half an hour. We enjoyed breakfast with my grandparents and then took our time packing up to head back to Orlando for our 3:20 pm flight. I wanted to get a group picture of all of us together before we left so grandma asked one of her neighbors to take a picture for us. It was crazy windy and the wind made it a little chilly, but we got it done! 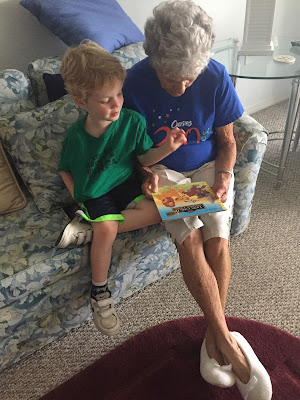 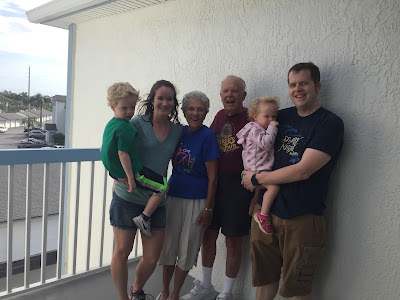 We left with plenty of time to spare so we didn't have to rush or worry about getting to the airport late. We even stopped at a fruit stand by the side of the road and bought some fresh grown strawberries. I had been talking about getting some Florida oranges to see if they were any better than what we get at home. The lady selling the fruit said that Florida oranges are hard to peel and are better for making orange juice so we just went with the strawberries. Paul had given us coupons for Jersey Mike's Subs so we stopped there for lunch and took our sandwiches with us to an ice cream place Carter had seen during our drive each day and was desperate to try. The building was shaped like an ice cream cone so it definitely got his attention! We ate our sandwiches and strawberries and then ordered ice cream. I was a little disappointed it was just soft serve but I got a cookiewich and it was delicious! Carter and Elise shared a strawberry/vanilla twist cup. 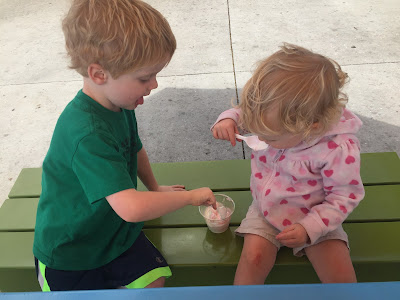 We got our rental car dropped off and made it through security with about an hour to spare before our flight. The kids and I walked around looking at planes and checking things out in the gift shop. Carter had so much fun playing with all the stuffed animals and was so good about it even telling Elise, "We are just looking, we are not going to buy anything!" Ty called to tell us they were getting ready to start family boarding and, of course, Carter decided he desperately needed to potty so we had to stop off at the bathrooms and missed family boarding. They still let us get on when we got there which was nice. I'm pretty sure no one wants to sit by either of my kids on a plane anyway! There are times I'd rather not! Elise continued her streak of pooping on the plane by pooping before we even made it into the air. I took her and had no incidents with her ripping stuff up or getting poop anywhere. But for some reason getting up and walking around on the plane made me get really motion sick and I was pretty miserable for the rest of the plane ride. We went from attempting to entertain the kids in a  somewhat educational means to straight survival mode. When Elise wasn't interested in watching the tablet, she ended up eating about 5 packages of fruit snacks because it was easier to just give them to her than try to quiet her screaming on a packed plane while I felt like I was going to vomit. 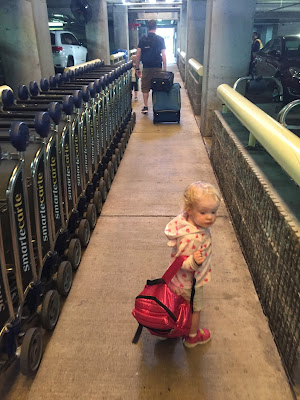 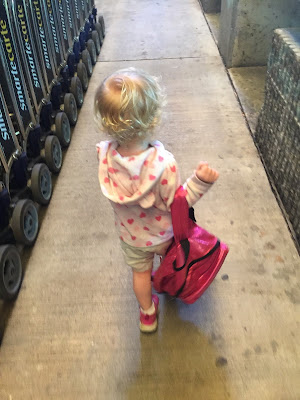 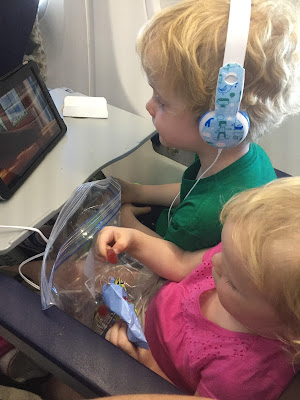 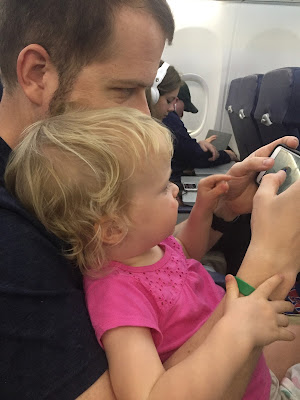 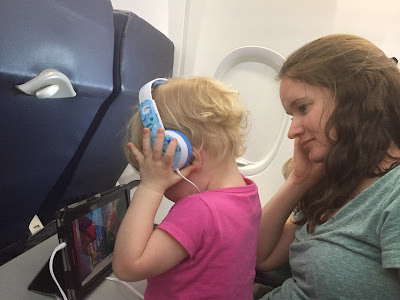 We made it to Dallas for our layover and I was still feeling really nauseous. I didn't feel like eating but we picked up some food to eat on our plane ride anyway. A little bit into our flight Elise pooped again. The flight was only about 45 minutes long so they never took the seat belt sign off. Ty asked permission to get up and take Elise to the bathroom for a diaper change. The stewardess said she had to tell him the seat belt sign was on, but to do what he had to do. This time Elise grabbed vomit bags and ripped them up as Ty changed her diaper. When they came around to pass out beverages a little while later, I got a Ginger Ale and finally started to feel a little bit better. Since I was feeling better I decided to attempt eating my dinner. We were still eating as the plane began it's descent to land. I didn't stop feeling sick until we were off the plane and walking in the airport. Thomas picked us up and the kids were excited to see him. We had flown with a local school's dance team which had just won some awards at nationals. When the girls started walking out into the main area, there was a huge group of parents there. They began cheering and clapping for the dance team, Elise loved it and started clapping along with a big smile on her face. Carter kept saying how excited he was to see Harper and how happy she would be to see us. It was adorable! It was nice to be home and Skippy sure was happy to see us! 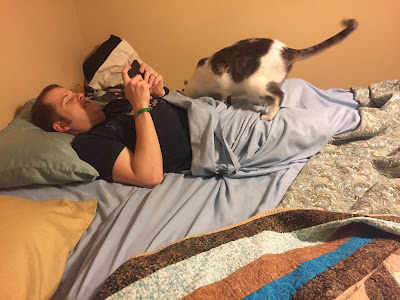