Going into our trip to Florida Carter was telling everyone he was going to the beach to visit his Uncle Paul, Aunt Amanda, Baby Cousin Wyatt, and his grandparents. He was talking almost non-stop about Wyatt and the beach. After our first two days in Florida without a trip to the beach we felt like we just couldn't hold out any longer! So on Friday morning we went to the beach before we headed to visit Paul and Amanda. I set an alarm and headed out for my run early so I could be back in time to go to the beach with the kids. I was so excited about the beach that I headed there for my run and enjoyed watching the sunrise on the beach. It was pretty cloudy so it wasn't as pretty as usual, I'm sure, but I still enjoyed it! I ran the first section of the beach barefoot but then realized that the sand was packed much harder than I remembered from running on the beach in the past. Not sure if my memory was hazy or if this beach was different than the ones I've run on before. It felt almost like running barefoot on concrete so I headed back to where I stashed my shoes and put them back on for the rest of my run. The wind was crazy strong and coming out of the north so I was running into the wind for half my run and the wind was much stronger on the beach. I decided to head back out to the roads after 4 miles on the beach and my pace per mile dropped by over a minute on the roads! 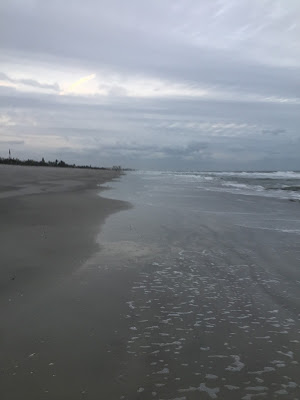 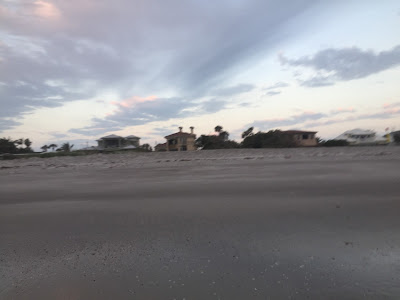 The kids were up and very excited for the beach when I returned. My grandma went with us to the beach but my grandpa decided to stay back since it was chilly and crazy windy! I'm not kidding about the wind, it was actually whipping sand up on my legs and it was hard to walk. We walked the couple blocks over to the beach and Carter could hardly contain his excitement. Once he could see the ocean, he took off running toward the steps onto the beach. Elise was in rare form and refused to allow me to hold her hand as she walked down the steps, but would hold my grandma's hand which I thought was cute! Carter took off running down into the waves and started splashing at the edge of the water. Elise emboldened by her brother at her side ran down into the waves too. She was not prepared for what it would feel like as the wave receded and took with it the sand underneath her feet. She fell face first into the water and was traumatized. Ty was standing closest to her and grabbed her up out of the water. She had sand all up the side of her face and her entire face was wet. I was so disappointed I had been taking pictures instead of recording because I have to admit the whole scenario was hilarious. I felt a little bit bad but I couldn't help laughing. Elise wanted me so Ty gave her to me and she started pointing back toward the condo while saying, "Go back!" pretty soon after getting wet. We decided Ty and my grandma would go back with Elise and I would stay with Carter. 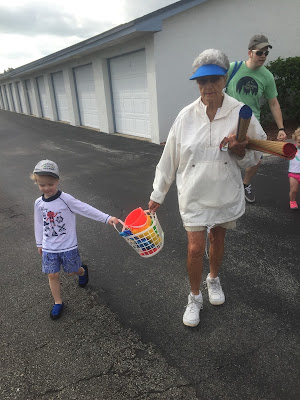 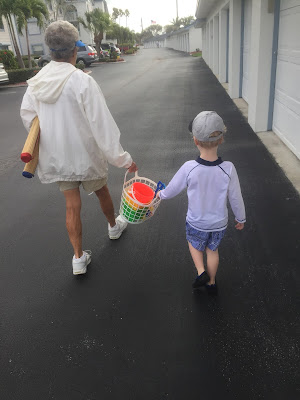 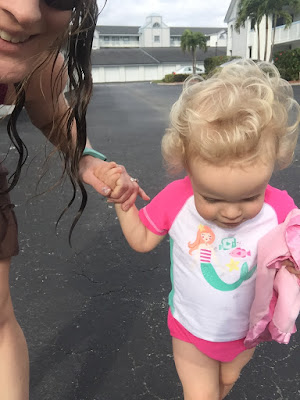 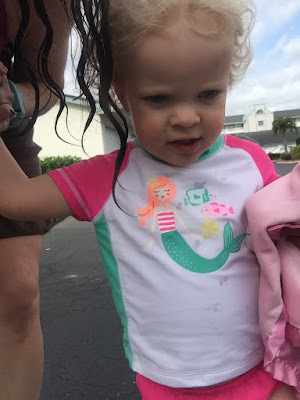 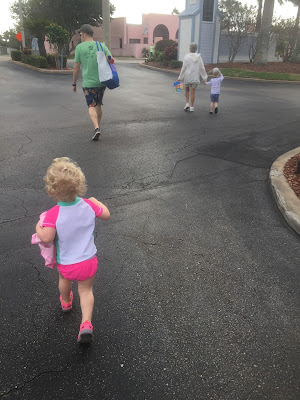 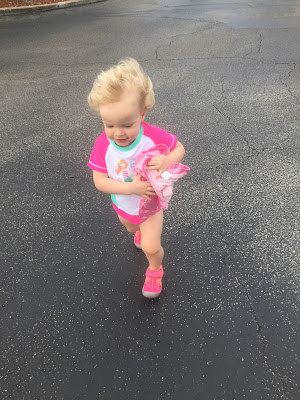 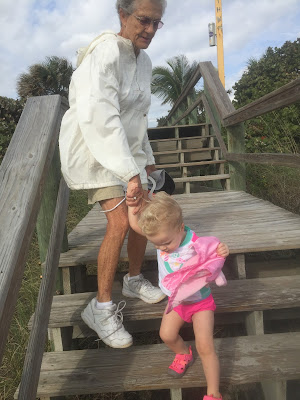 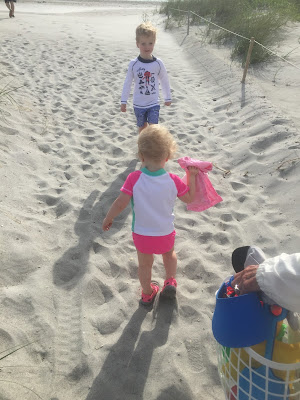 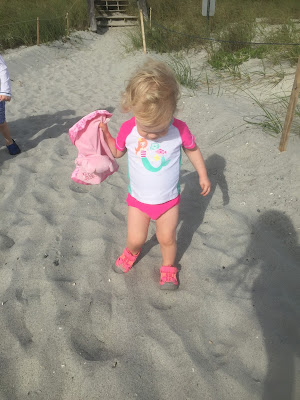 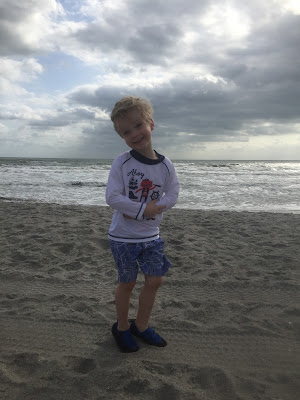 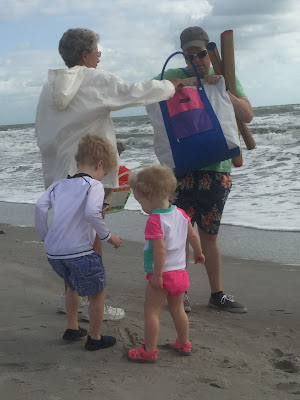 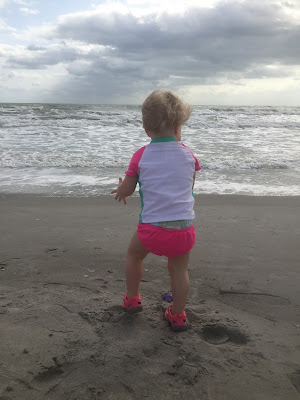 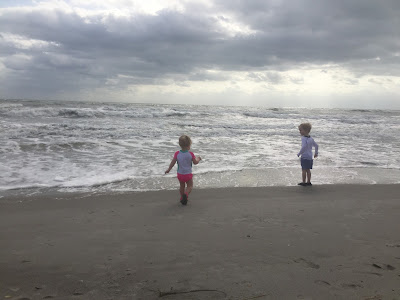 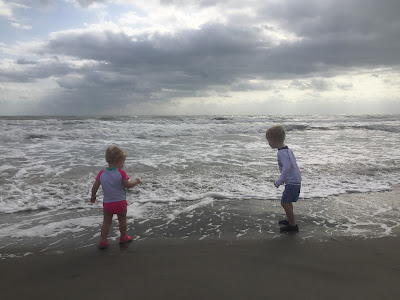 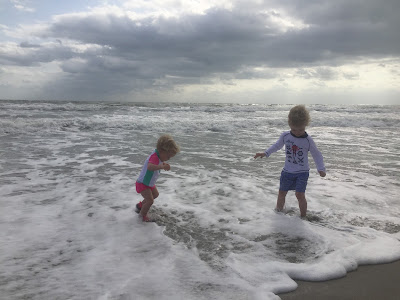 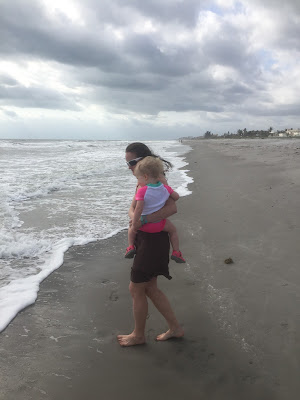 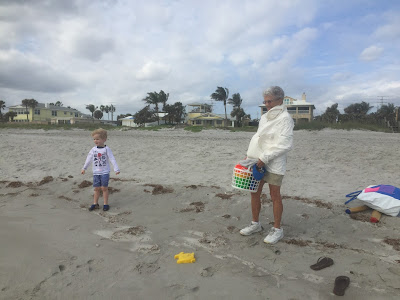 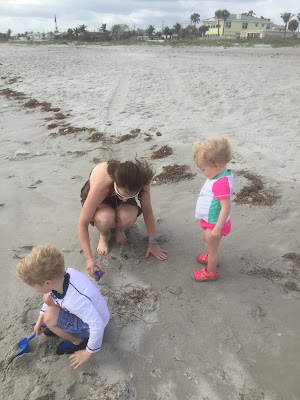 Carter was having an absolute blast playing in the sand and the waves. He liked pretending to be Catboy, racing away from the waves as they came up to the shore. Then he'd use his Gekko grip to plant himself and keep the waves from knocking him down. He was standing in the waves yelling, "This is our first time at the beach, yay," right as a very strong wave knocked him backward. I grabbed his arm and pulled him back up but he got some water in his mouth and swallowed it. He kept telling the story to everyone, saying the wave was as tall as he was and I caught him right away but he accidentally drank the salt water and it tasted terrible. He told me if it had been regular water he wouldn't have minded and would have drank it all up. He was cracking me up. After that he was ready to head back. He wanted to be carried so I carried him most of the way back. He insisted on stopping to climb a couple trees so we did. Read about Carter's first trip to the beach here. 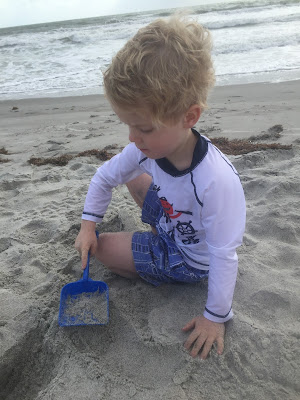 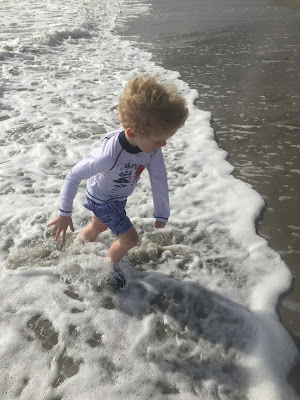 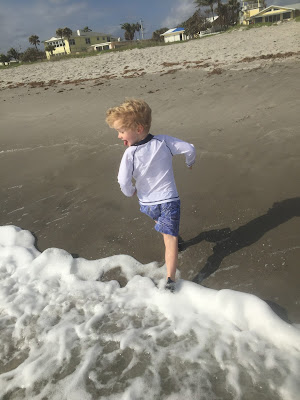 Once we were all cleaned off after the beach we headed back to Paul and Amanda's for our last day with them. Elise fell asleep for the drive which made for about an hour nap. I again tried transitioning her from the car to the bed but she again woke up. The unfortunate happened this time and she wouldn't fall asleep for a nap later either. Instead we played outside climbing trees and running around the house. We took some pictures of the cousins together after lunch. Leina had asked for a picture of all 3 kids together. Amanda took pictures as the rest of us tried to get them to all look at the camera at one time. Of course with 3 young kids that was impossible. Then Wyatt grabbed onto Carter's shorts and was pulling them. Carter didn't like that and tried to pull Wyatt's hand off his shorts which was a big distraction for them. Although we didn't get a picture of them all looking at us at the same time, I thought they were all absolutely precious! Elise had a blast playing with Wyatt in the afternoon but then randomly threw a toy at him. I put her in time out and then had her apologize to Wyatt. A little while later she did it again. That time she yelled sorry to Wyatt and then immediately walked over and put herself in time out. The lack of a nap was definitely rearing it's ugly head! 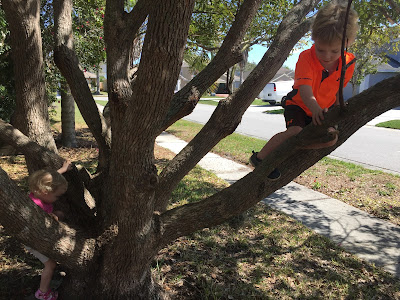 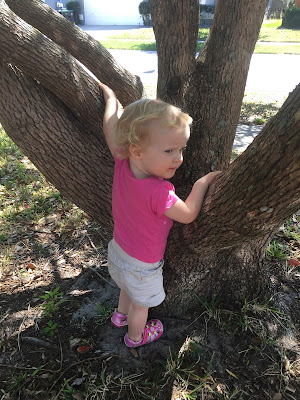 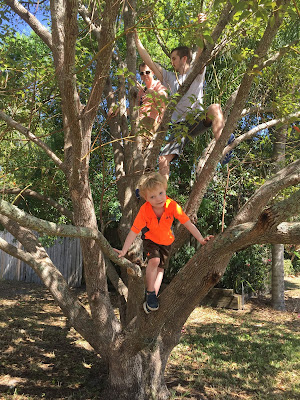 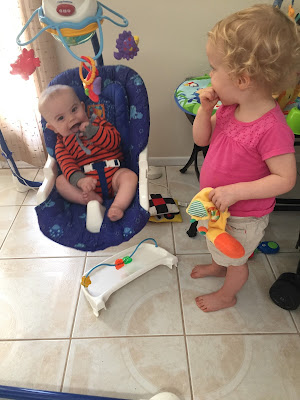 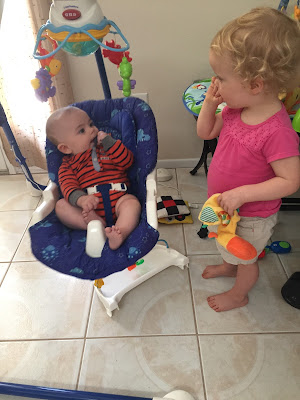 We had time to go to the park this day. The kids played at the playground for a while and then we went for a walk around the lake. I was hopeful Elise would fall asleep in the carrier while we walked around, but no such luck. I had been playing a game with Carter in the car where I'd think of something, give him a clue, and he'd ask me questions to narrow it down before guessing. He wanted to play with Paul on our walk. Paul said, What hops in the grass?" Carter guessed frog which I thought was a great guess! It turned out Paul was thinking of a grasshopper. When Paul headed out for his camping trip we left to head back to my grandparents' house. We saw a Dairy Queen on our way back and got excited because we don't have any near us. Elise was fussing to eat so we decided to stop for dinner. Bedtime was much more successful this night as Ty suggested putting Elise down first and then putting Carter down later which worked much better. Plus we got home closer to bedtime so they weren't quite as overtired!

Posted by Liz Runningmomma at 2:50 PM