Ty's brother, Paul, and sister-in-law, Amanda, have been living in Florida for about 7 years now. We got to go see their house for the first time almost 3 years ago, thanks to Ty's parents paying for all of us to vacation in Florida together. We met up at their house and then traveled from there to a beach house for our vacation after spending one night. We have always wanted to go visit them again but it is so expensive to fly and too far to drive and two kids traveling while trying to nap and sleep at night in a different place is a bit of a nightmare. But after Wyatt was born we decided we just have to do better about visiting! Plus my grandparents go to Florida every winter for about 4 months and stay in a condo they have down there. We figured we could go visit everybody during one trip. We took our tax return and used it to buy plane tickets to Florida. We left on Wednesday, March 1st and returned home on Monday, March 6th. It was pretty cool that we happened to be taking Elise at almost the exact same age Carter was during our last trip to Florida! Carter was almost 22 months and Elise had just turned 23 months old! Read about Carter's first plane ride here.

Our flight on Monday was a little after 8:00. Since we needed to leave the house around 6:30, so we could be at the airport with plenty of time to make it through security, we woke the kids up early. Carter was convinced it was still nighttime since it was dark outside and was concerned that Ty and I had stayed up all night. We had a layover in Houston and then landed in Orlando at 3:20 which would be 2:20 our time. I wasn't sure how napping would fit into the schedule, but I was hopeful Elise would nap on one of our flights since she woke up early that morning. I was so excited for Elise's first plane ride. I knew since Carter had his backpack as a carry on, she would want one too. I packed her blanket and a couple of her Highlights Hello magazines in her backpack. I'm so glad I did because she insisted on carrying her backpack every time we walked through the airport, she actually did a better job carrying her backpack than Carter did! He typically pawned his off after a little bit but Elise carried hers every time. The only problem was that it did slow her down considerably which then slowed down our entire party! While checking in our bags Elise got into her backpack and pulled out a container of Cheerios I had packed. I put a Cheerios play book along with a container of Cheerios in each of the kids' bags. I rushed over to take it from her right as she pulled the lid off and spilled them all over the floor, so much for that plane ride activity! 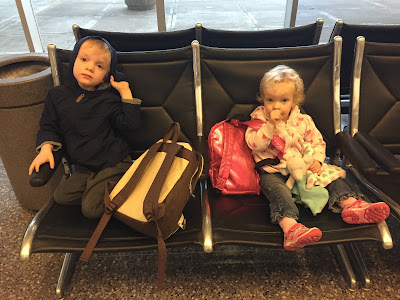 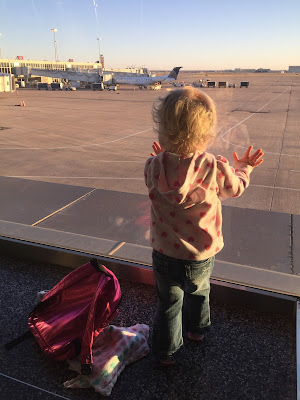 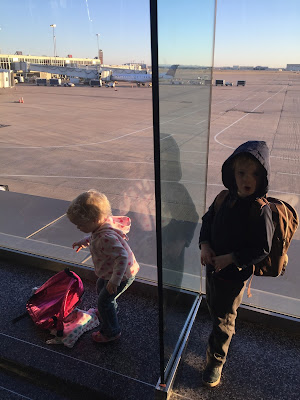 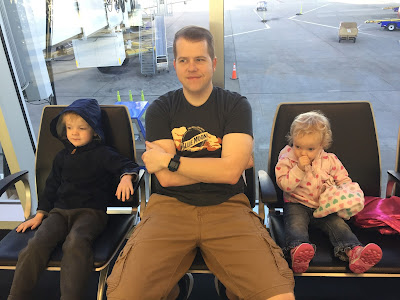 Both kids did wonderfully on the first flight. The newness of everything was very exciting to them. They both watched out the window during take off and enjoyed seeing the clouds as we flew. We read a couple of books, colored with special magic marker coloring books I found on sale after Valentine's Day for $1.50, enjoyed the complimentary apple juice, and played with lacing shapes. Elise decided she wanted to sit next to me instead of on my lap so I ended up sitting in the crack between two seats which ended up killing my back later. Carter chewed gum for take off and landing and Elise ate fruit snacks to help with her ears. When we landed in Houston everyone around us was telling us how cute our kids were and the ladies in front of us told me how much they enjoyed listening to me read the books. Everything seemed pretty seamless. Elise hadn't napped at all, but she was holding it together okay. In Houston we grabbed sandwiches at Subway before boarding our flight to Orlando which ended up being delayed. We saved our sandwiches to eat on the plane.

During our second flight of the day I was very hopeful Elise would fall asleep as it was her naptime and she had woken up early that morning. We ate our sandwiches along with some Goldfish crackers for lunch. Then we let Carter watch a movie on the tablet since we had promised him he could during the second flight. He wanted to eat some more once we got the movie started so he finished his sandwich while watching The Secret Life of Pets. Elise on the other hand was a mess during the flight. During take off she pooped in her diaper so Ty had to change her on top of the toilet in the bathroom once we were cleared to leave our seats as there was no changing table. He said there was poop everywhere and she was pulling everything down. When they got back she was exhausted and beginning to fall apart. All she wanted to do was continuously kick the seat in front of her. When I'd restrain her from doing so, she'd scream. It wasn't very much fun. I was able to calm her down by laying her sideways and rocking her while singing to her. She especially liked it when her head was in Ty's lap. She'd tolerate that for a while before screaming no at me and writhing onto the floor. The plane ride consisted mostly of me fighting Elise and her attempting to kick the seat. Then I made her sit in my lap during the descent and held her legs down. After we landed and were taxing on the runway, surprise surprise, she fell asleep! Why in the heck couldn't she have done that an hour earlier?! We snuck the baby carrier out and I put her in it. We were able to get it all strapped up without her waking up but she was awake before we made it to baggage claim! We got our rental car, Ty installed the car seats, and we were headed to Paul and Amanda's house. 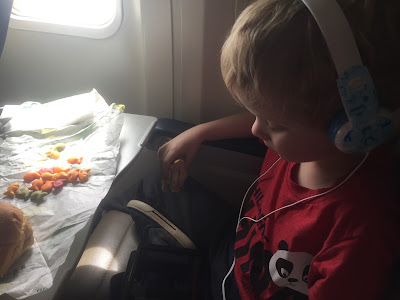 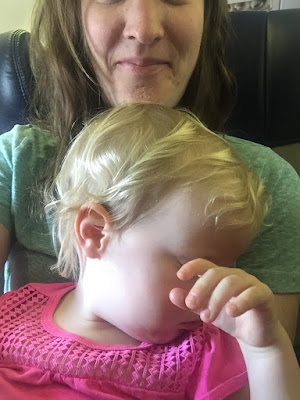 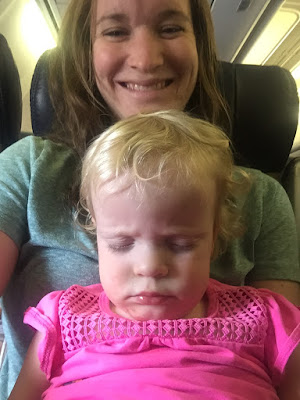 Elise fell back to sleep on our drive to their house and Carter drifted in and out a little bit. I was a little bummed it was only a 20 minute drive because Elise really needed the sleep! We were hopeful she would transition from the car to a bed like she does at home but she woke up as I carried her into Paul and Amanda's house. Wyatt was napping when we arrived so I spent a while trying to get Elise and Carter down. I didn't have any luck so we decided to walk to the playground to keep it quiet for Wyatt so at least he could sleep! Elise was more accident prone at the playground since she was tired but acted mostly normal during our trip. We got to stop by the pond in their neighborhood to see the ducks. Carter loved that the ducks looked different from the ones we normally see at home. After that the boys were off to an NBA game. Amanda got free tickets for all of us but we decided Elise would most likely not last at the game so she gave Elise and my tickets to friends. At first Carter was a bit apprehensive to go without me, I think mostly because he was tired and was feeling shy. I told him he could pick out a treat at the game and he was all about it after that! Ty said Carter loved it and enjoyed picking out some cotton candy to eat during the game. After Carter picked out his treat he said he wanted to go back to watch more of the movie. Ty thought that was pretty funny! Elise was a mess the entire time they were gone, throwing all of her dinner on the floor and screaming most of the night. First it was that she wanted juice, then she wanted her daddy, when she'd forget about one thing, she'd remember the other. Mostly she was just exhausted! She did perk up a bit when Wyatt woke up from his nap, I was shocked he was able to sleep through all her crying and screaming. She was pretty darn excited to see him. Then she finally calmed down after I gave her a bath and put her in her jammies. Amanda and I joked that the guys were going to come home to a calm, quiet child and not believe us that she had been screaming and crying for the past 2.5 hours! The guys left the game early and we headed to my grandparents' condo around 8:00 (it was a little less than an hour drive). I was hopeful Elise would fall asleep on the drive, but instead she cried for most of it and then it was a struggle to get her to sleep. She didn't fall asleep until almost 11! 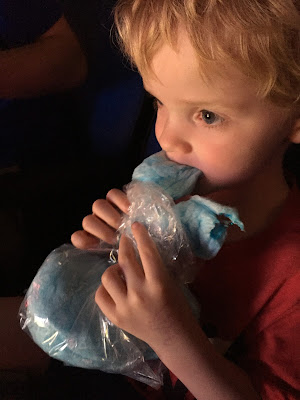 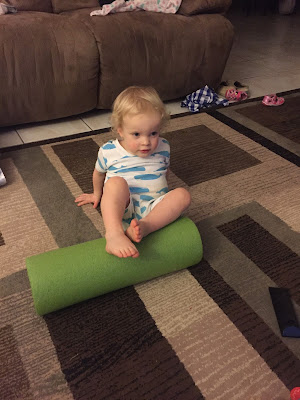 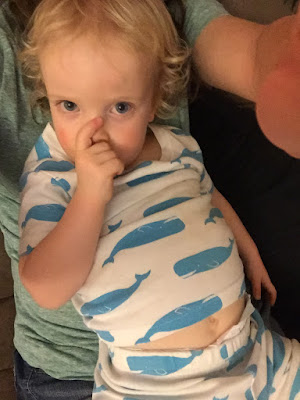 That night Carter woke up in the middle of the night crying and woke Elise up. I ended up having to go into their room to sleep with them, but it took Elise over an hour to fall back to sleep. With all the excitement of the day and the skipped naps, I realized how difficult it is to travel with little children when you have more than one child. It wasn't too bad with Carter when he was little because there was no one else around to keep him awake or to wake him up. I felt bad for the kids with how tired they were, but I knew they would feel better the next day and I was still hopeful they would nap then. Even though our first day was a bit of a mess, mostly Elise's doing, we knew the trip would be worth it in the end!
Posted by Liz Runningmomma at 1:17 PM