Some Day They Won't Need Me

Friday evening we traveled to my parents' house because we had the last 5k of a 3 race series on Saturday. Ty is normally able to work through lunch and then leave work a little early so we can get there at a decent time for the kids. That way they aren't getting baths and going to bed late. He wasn't able to on Friday so we arrived after bath time which put everything behind schedule. Since Elise was overtired she was struggling to fall asleep. In a post last week I mentioned how she's easier than Carter because she's not so attached to me and will let other people take care of her. Literally the next day I was eating my words! She suddenly just switched and will no longer let anyone console her when she is overtired except for me. Which really isn't too bad because walking around patting her booty while she's snuggled up to me is quite enjoyable. The problem is that Carter won't go down without crying for anyone else, especially when he's overtired. So here we were Friday night with 2 overtired children. I was upstairs working my butt off to get Elise to sleep. I'd have her almost asleep and then she'd suddenly pop her eyes open. All the while I could hear Carter downstairs talking and knew they were waiting on me to come down stairs so I could put him to bed. It was over an hour past his bedtime and I was frustrated. I was frustrated neither child would go down for anyone else. I was frustrated Carter would be going down so late and would be tired the next day with an evening race that would mean he would go to bed late again. I couldn't help but think, I wish they both didn't need me at the same time. I wish one of them would need their daddy. Then the thought creeped in my head, some day they won't need you. Some day they will want their daddy over me. Some day they won't want either of us. Some day they will be old enough to take care of themselves. Then I was soothed. I want them to want me right now. I snuggled Elise close to my chest and soaked in her baby skin, the smell of her hair. Because someday she'll have a problem and she won't come to me, but today she needs me. That thought brought me back to the here and now. It made me appreciate that my babies want their momma. When Elise was finally asleep I went downstairs and carried Carter, who happily gave me a kiss and hugged me back pats included, to bed. I walked out of his room smiling. That thought, some day they won't need you, reminded me to appreciate each moment. 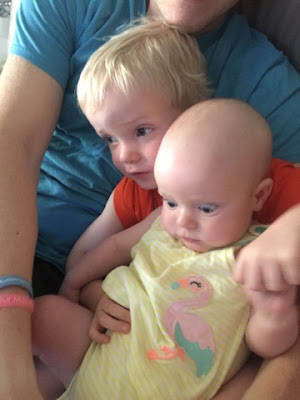 After a busy weekend, which included a friend's birthday party yesterday, and less sleep than usual Carter was extra fussy on Monday morning. He requested I leave sissy in her room when she woke up crying. So sad and not the typical sweet big brother who cries out to me, "Get sissy!" the moment she makes a peep. I made us smoothies to go with lunch and Carter polished his off while I started getting the rest of lunch ready. I had carrots cut up and then asked him if he wanted a sandwich or a wrap. Instead of answering me he just started crying. I picked him up and asked him what was wrong. He responded, "I'm too tired to eat lunch. Go sleep." So I carried him off to bed and laid him down. Then I proceeded to make my wrap and sit alone at our table eating by myself. Elise had gone down for a nap quite a while before. So there I was crunching carrots in silence. I missed Carter. He normally chats with me at lunch and makes up silly stories. He'll tell me some strange story about a squirrel or a fox and then laugh as he says, just joking. Other days he recaps our day or tells me all about conversations he had at the playground with friends he made. I always took it for granted and never really thought about how lucky I was to have that time to talk with him. Sitting there without it I was lonely. That same thought popped back up in my mind, some day they won't need you. I sat there and choked down tears. Some day these precious babies won't need me. Eventually Carter will stop telling me everything that goes on in his life. He'll turn into a teenage boy which from my experience means he'll share very few thoughts and feelings with anyone, especially his mom. Funny how the thought that brought me comfort just days before was a thought that nearly brought me to tears today. Sometimes being a parent makes me a walking contradiction. What I do know is true is that some day my children won't need me in the ways they do now. Hopefully when we get to that point their independence will be freeing to me. For now I need to hold onto that as a reminder to appreciate the challenges them constantly needing me causes.

Posted by Liz Runningmomma at 11:35 AM