For a while now Carter has been singing. He has the words to his favorite songs memorized and randomly sings them throughout the day. It may be "Twinkle, Twinkle, Little Star" in the bath tub, "Baa, Baa, Black Sheep" as he digs in the dirt, "Pat-a-Cake" while he plays cars, "The ABC's" as he walks along the sidewalk, the options are endless. He also likes to make up his own songs. He'll randomly string words together to a tune and even sometimes sentences now. It is adorable and hilarious and I absolutely love it. The only problem is that he just will not let me record him. I know when he's older I will love looking back and hearing his sweet toddler voice sing those songs, but the minute he sees my phone, even if I'm trying to hide it, the song is over. This morning I had a rare treat. I sat down on the bed to put lotion on my legs after my shower. Carter grabbed the stool we have for him to reach the sink so he can brush his teeth and put it up against my dresser. Then he turned to me and announced he would now be singing. So on his stage he belted out his favorite songs starting with the ABC's, naturally. I was super sneaky and set my phone up while propped with a blanket so he didn't even notice it was there. When he finished the first song I wasn't sure if he was done so he informed me it was time to clap. Then he wanted Harper in the audience as well so I called her up on the bed and she happily laid down, staring at him. It was one captive audience! Then Elise woke up from her nap and we added another audience member. He was so cute standing in his big boy undies and jammy top singing his heart out. It was one of those memories I will cherish for the rest of my life. If you watch the video, don't judge me by the mess on top of my dresser. When I get in the shower Carter has decided the best game is knocking everything off my dresser so I've given up with trying to make it look cute for the time being. And I had just gotten out of the shower so you'll notice debris on the floor from him destroying my dresser. 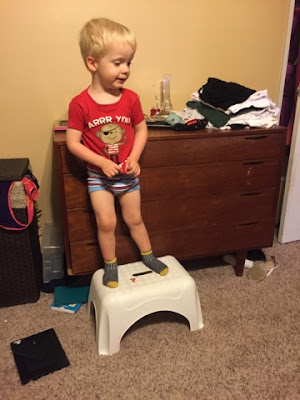 Posted by Liz Runningmomma at 12:47 PM

Email ThisBlogThis!Share to TwitterShare to FacebookShare to Pinterest
Labels: Carter