I got a text from a friend one day asking me if I could watch her kids a couple days while she worked a consignment sale she does twice a year. I was quick to say yes because one of her four kids is Landon, one of Carter's best friends. I figured 6 kids for a couple days may be a little crazy but I can handle a room full of 25 kids so it should be manageable. Thomas agreed to take Harper for a couple days to relieve her of the stress that would be a house full of children.

Thursday morning they arrived around 8:30 and Carter was beyond excited. Not only does he love Landon, he's pretty smitten with Autumn, Landon's sister going into first grade. The first part of the morning was definitely the most nuts out of the entire two days. They were excited to be somewhere new, somewhere none of them other than Landon had been before. They moved from room to room at a break neck pace pulling out every toy to see what it was and what it did. They were testing me out to see what worked, what didn't, and what they could get away with. There was whining, tattling, fake crying, the works, but we still had so much fun. When Elise woke up from her morning nap I decided it was time to get out of the house. I told the kids we were going to the park but we had to pick up the house before we left. I was impressed with how quickly it went despite the huge mess, mostly due to the older kids. Then I filled 6 water bottles with ice and water (one for each kid and one for me), got a bag for the older boy who wanted to take the baseball bat and ball to the park, strapped Elise into the baby carrier, grabbed the wagon and we were ready to walk to the park. Naturally all the kids wanted to try out the wagon because it was new. I told them the younger kids got first dibs. Carter and Landon then Autumn. If they didn't want to ride then the older boys could have a turn. Carter didn't want to ride so Autumn tried it out and didn't want to ride either so the older brothers tried it out. Timmy, the oldest ended up riding for quite a while while Chandler, the second born, pulled it. 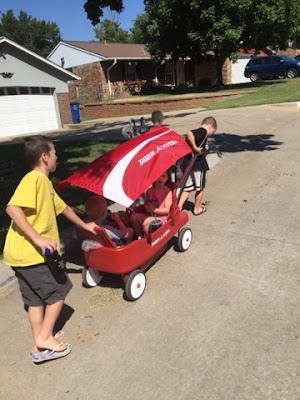 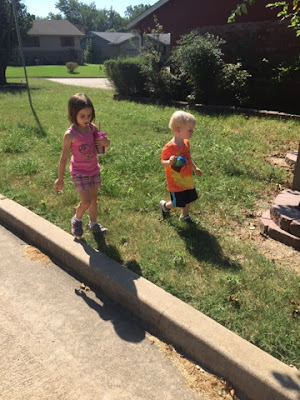 The park was so much fun. I pitched to Chandler while the rest of the kids played on the playground. It was really nice to have some one-on-one time with him as I hadn't earlier in the morning. The thing that surprised me the most about watching so many kids was actually having quality one-on-one time with each of them throughout the day. In the past when I heard people with 5 or more kids claim they still had quality time with each child I was always skeptical, but it definitely happened. I actually had more time to devote to Elise than usual because Carter was busy playing with the other kids. It worked out quite nicely. There tended to be 2 groups of 2 kids playing with me playing with the odd man out or a group of 2 kids, a group of 3 kids and me playing with one of the groups or with Elise. The biggest change from our normal day to day was how loud it was. If one kid was playing the drums, one had maracas, one had a guitar, one was playing xylophone, and one was inexplicably yelling! I also had to stay on top of having the kids pick up or it quickly got out of control.
At the end of the first day Carter fussed that he didn't want them to leave but was pacified that they would be back. I texted Ty that I knew for sure I didn't want to have 6 kids which he found mildly funny. It was fun and fast paced but it was also loud and fast paced. I felt like the morning was gone in a blink and I was wishing there had been more time for me with Carter. The next day when they arrived I was impressed that they didn't come whirling in the door in Tazmanian Devil style like they had before. They knew what toys we had and went for what they wanted to play with. There was less mess, less destruction. I'm always impressed with how quickly kids figure out rules and boundaries. They all knew what I expected as far as behavior and it was a nice quiet morning with far fewer disagreements between children. We had a water color painting party, then moved on to a bubble party (thanks to the awesome bubble wand and cup kit my parents got for Carter), from there it was Play Doh. Our activities were all done with all kids together. It was so much fun to have them all playing and interacting at the same time although they were all vying for my attention, yelling out look at me, watch me, see my bubble, look what I made! I was in high demand but they did well when I explained how I was divvying out attention. When their dad arrived to pick them up they said they didn't want to go and were sad to leave. I had honestly been having so much fun that I wasn't ready for them to leave either.
That evening Carter was all over me. He wanted to sit in my lap to eat dinner and was acting out for attention. I told him instead of yelling and being naughty all he needed to say was, "I need attention." So the rest of the night if I looked at or talked to anyone else I immediately heard, "Mommy, Carter need tenttion!" But by the next morning he was back to his usual self. My conclusion from the experience was that I can handle 6 kids and it can actually be fun. But then again I did miss out on the whole bath time/bed time routine. So maybe I'd be singing a different tune if I had.
Posted by Liz Runningmomma at 12:22 PM