A while back I shared the news that my best friend from high school, Erin, was also pregnant and due exactly a month after me, read the post here.  At 28 weeks she found out she had gestational diabetes and at her 36 week appointment her baby was measuring in the 89th percentile.  Her doctor planned to induce her if the baby got too big, but Addison came on her own before they got to that point.  Thursday, April 16th, Erin started having regular contractions about 6 minutes apart.  They lasted for an entire day but never got longer, stronger, or closer together.  We were in town for the weekend so I hoped Addison would make her arrival while we were there, but no such luck.  We left Sunday evening and then Monday, April 20th, when I woke up to feed Elise I saw Erin had texted me around 6:30 am asking me to call her.  Of course I immediately did and after talking to her for a few minutes, confirmed for her that her water had broken!  She headed to the hospital and sweet Addison was born at 8:44 that night.  One day later and she and Elise would have been exactly one month apart.  The craziest part about it was that I went into labor at 37 weeks, 4 days and Erin's water broke at 37 weeks, 5 days!  Little Miss Addison weighed in at 7 pounds, 14 ounces and measured 20.5 inches long.

After I found out Erin's water broke I was desperate for news all day long, texting her every 2 hours for an update if she hadn't already updated me.  I couldn't wait to hear the news of Addison's arrival and to see pictures of her precious face.  Once the news finally came and a picture was saved to my phone, I needed more.  I just had to hold her, feel her skin, kiss her sweet cheeks!  I wanted to give Erin time to get home and get settled before heading to visit, but it was so hard to wait.  Each day that went by I was more and more anxious to meet Addison, to see Hayden as a big brother, to help Erin with her recovery.  They went home Wednesday afternoon and I made plans to visit on Thursday.  We had a playdate in the morning, ate lunch, and then headed out at Carter's nap time.  Wednesday night I told Carter we were going to Landon's house for a playdate the next morning.  When he woke up I told him we were going to go home to eat lunch after our playdate at Landon's and then leave at naptime to go to Hayden's house and meet his baby sister, Addison.  Then we would spend the night at his Oma and Opa's house.  All week he had been excitedly telling me "Gma, Gpa come my house!" because he knew they were visiting over the weekend.  So that morning he kept saying "Go Landit's house, go Haydey's house, see Haydey's sissy, go Oma Opa's house, Neema Gpa come my house!!!!"  It was almost too much excitement for him to handle!

When we arrived I got my cuddles with Addison and then went into picture taking mode.  I was so excited to get Elise and Addison together.  Of course I had to get pictures of them.  It was so sweet to watch Hayden with Addison.  He was also very sweet with Elise.  Carter was more interested in all of Hayden's toys than he was in the babies.  After plenty of baby snuggles I put Elise in the baby carrier and took the boys outside to play.  Hayden loved me chasing them through the yard and with Elise strapped to me that was no easy feat!  As dinner time approached we headed to my parents' house about 30 minutes away. 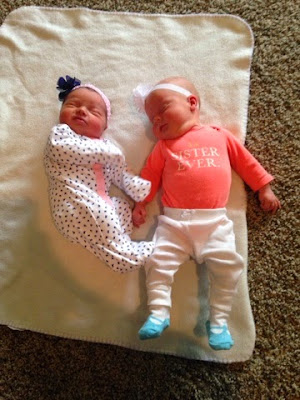 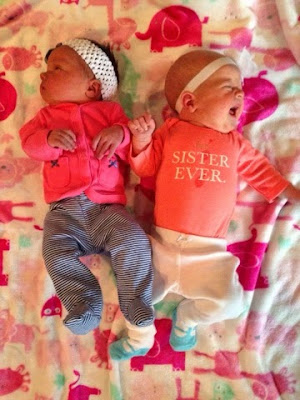 Friday morning we headed back over.  The minute Hayden saw me he asked to go outside.  So despite the fact that it had rained all night and their yard had turned into a marshland, I again strapped Elise to me and out we went.  Both boys ended up with wet shoes and socks.  Then Carter face planted into a muddy puddle, getting his whole front dirty.  Before going back inside for lunch I sprayed both boys' legs, feet, and shoes down.  Then I pulled all Carter's clothes except his diaper off and sprayed them down.  While I got lunch ready Elise was fussing because she wanted her pacifier but she kept accidentally spitting it out.  Hayden didn't like her crying and was on pacifier duty.  Each time she spit it out he was quick to go over and give it back.  After we ate lunch the boys played and then we said our goodbyes.  Carter and Elise both slept the whole way home and after chasing the boys around with Elise in a carrier on my chest for the second day in a row, I wished I could sleep too!  On our 2 hour drive home I was already looking forward to getting Hayden and Carter together to play again and Elise and Addison together to lay around again!  Lucky for me we have a wedding to go to in my hometown this weekend, so we'll stop by and see the kids on our way into town Friday. 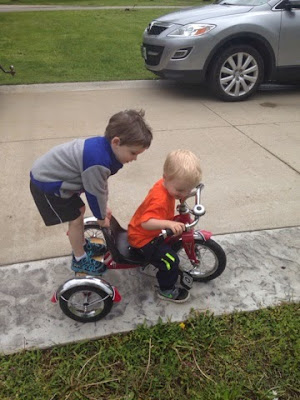 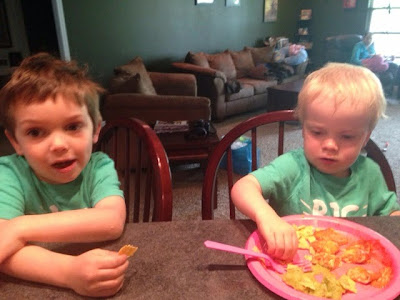 Posted by Liz Runningmomma at 12:05 PM