Easter was quite exciting for us as it was Elise's very first holiday.  This year we stayed home and my parents came to visit us.  Our celebrating started on Saturday with a special event that I had been looking forward to for weeks, Breakfast with the Bunny at the zoo!  It was difficult to drag my sleep deprived self out of bed to get ready for the event, but I did it with thoughts of Elise's adorable outfit motivating me.  My best friend, Erin, got her the cutest little bunny onesie with a matching skirt with pink polka dots.  I paired the outfit with tights, socks that looked like they were pink shoes, and a pink head band with white polka dots.  I wanted Elise dressed up special to see the Easter bunny because I knew we'd get her picture with him.  Carter insisted on picking out his own outfit and I didn't argue with him because I figured he'd most likely decide not to get his picture with the Easter Bunny.

As we arrived at the event we saw a long line of people waiting for the zoo to open.  I got Elise situated in the baby carrier and we headed to the entrance.  We didn't have to wait for very long in line and then immediately headed to ride the train back to the event.  Carter was so excited about the train and eagerly watched for it to arrive as we waited.  It was so much fun to ride the train while wearing Elise and with Carter next to me.  Ty was on Carter's other side.  Outside the event center they had a pig with bunny ears on which Carter thought was quite funny.  He wanted to get down and stare at the pig but wasn't interested in touching it at all.  Breakfast was set up in a buffet style with scrambled eggs, bacon, hash browns, french toast sticks (which Carter called french fries), fruit, and scones.  While we were eating the Easter Bunny came out and Carter was desperate to go see him.  Ty and I headed over with him and Elise.  Luckily the line was relatively short and as we waited our turn to get a picture with the Easter bunny, a member of the zoo staff was walking down the line with a real live bunny for the kids to pet.  Carter thought it was awesome and I was amazed that the bunny tolerated Carter petting it's ears and face.  As our turn approached Carter still seemed excited to see the bunny, but once we walked up to the bunny he freaked out and didn't want his picture taken with the bunny.  I put Elise in the bunny's lap thinking if Carter saw sissy doing it, he'd be more likely to do it, but no such luck.  Elise got her picture with the bunny and we headed back to our table. 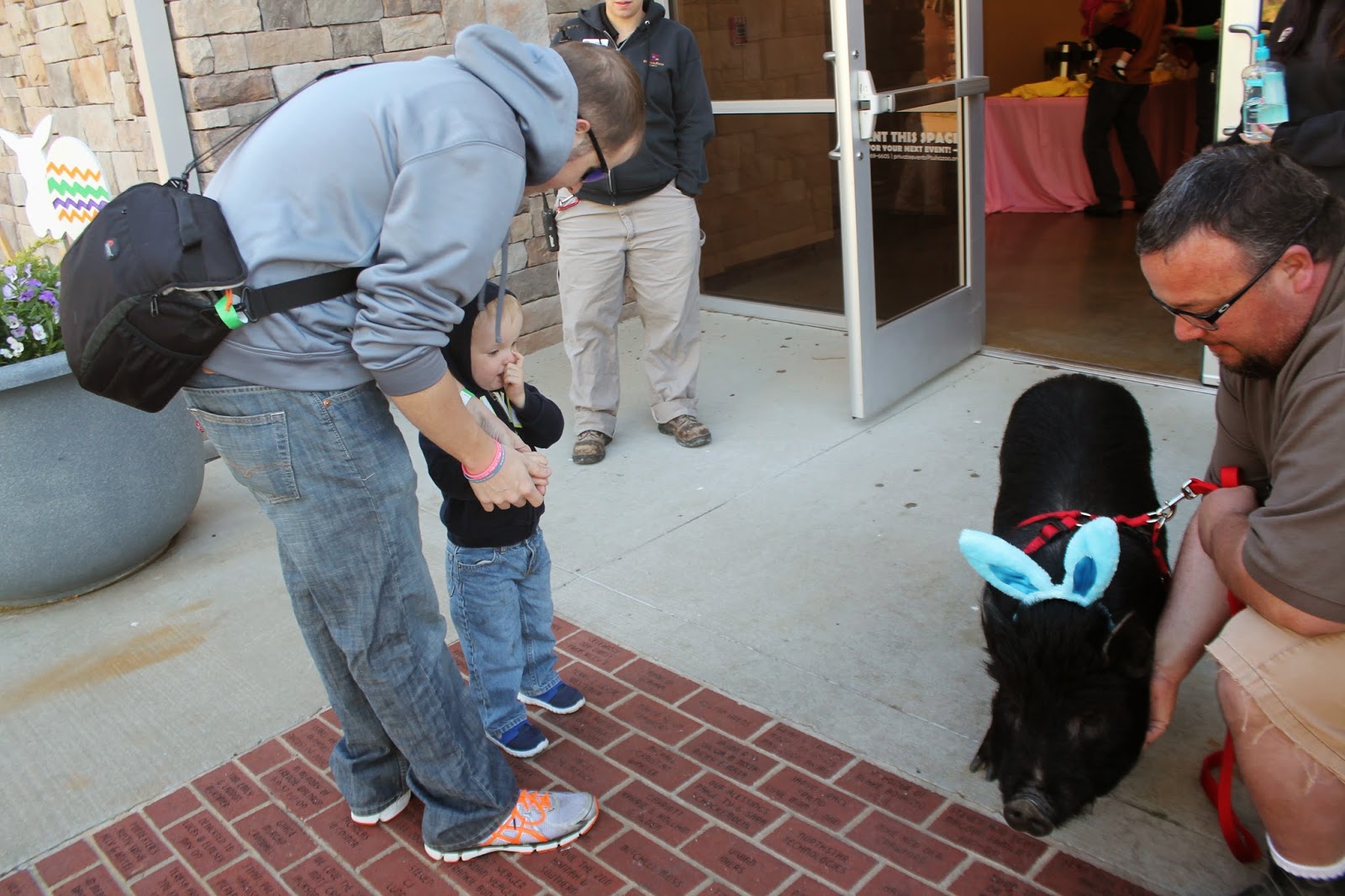 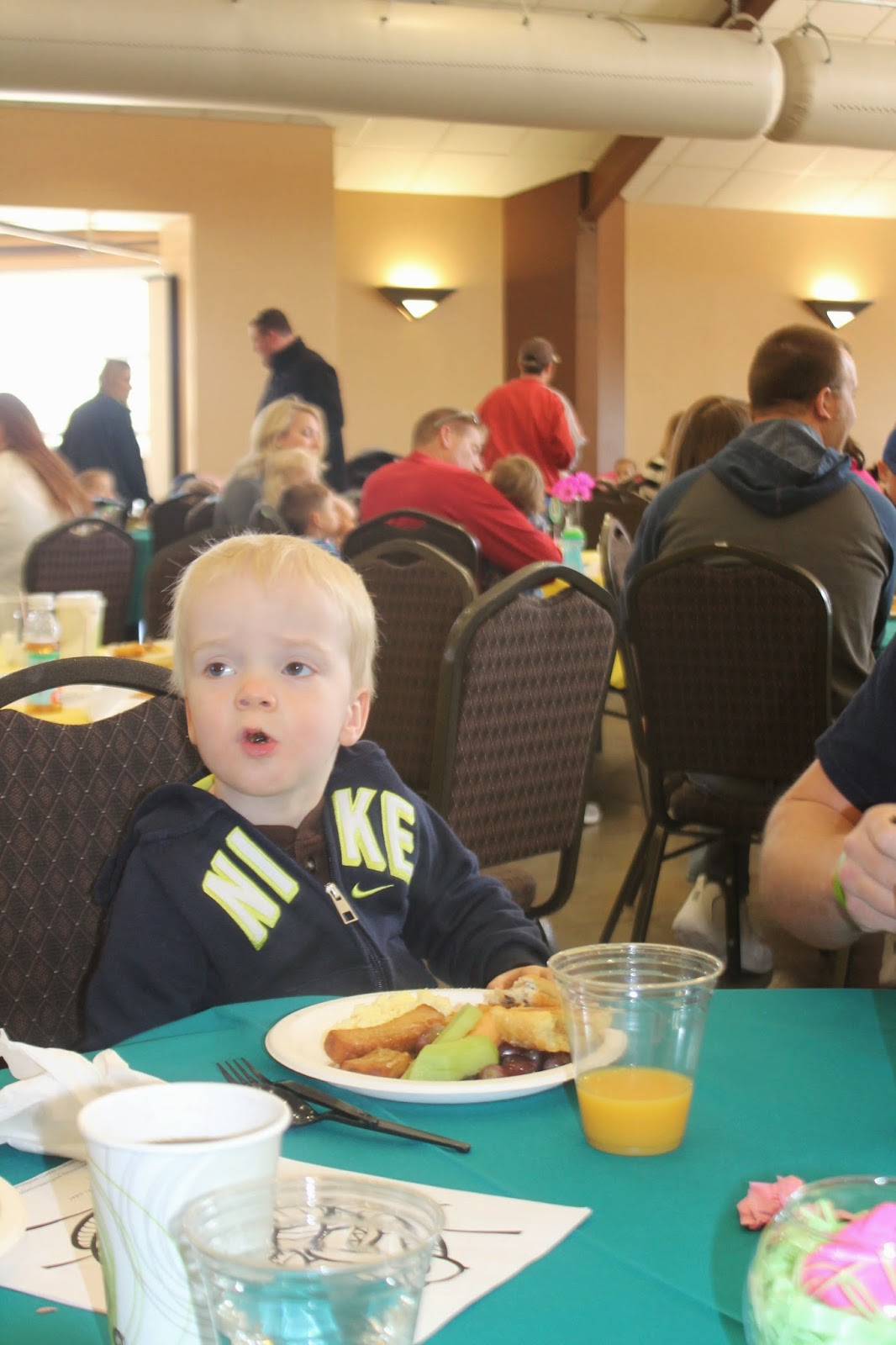 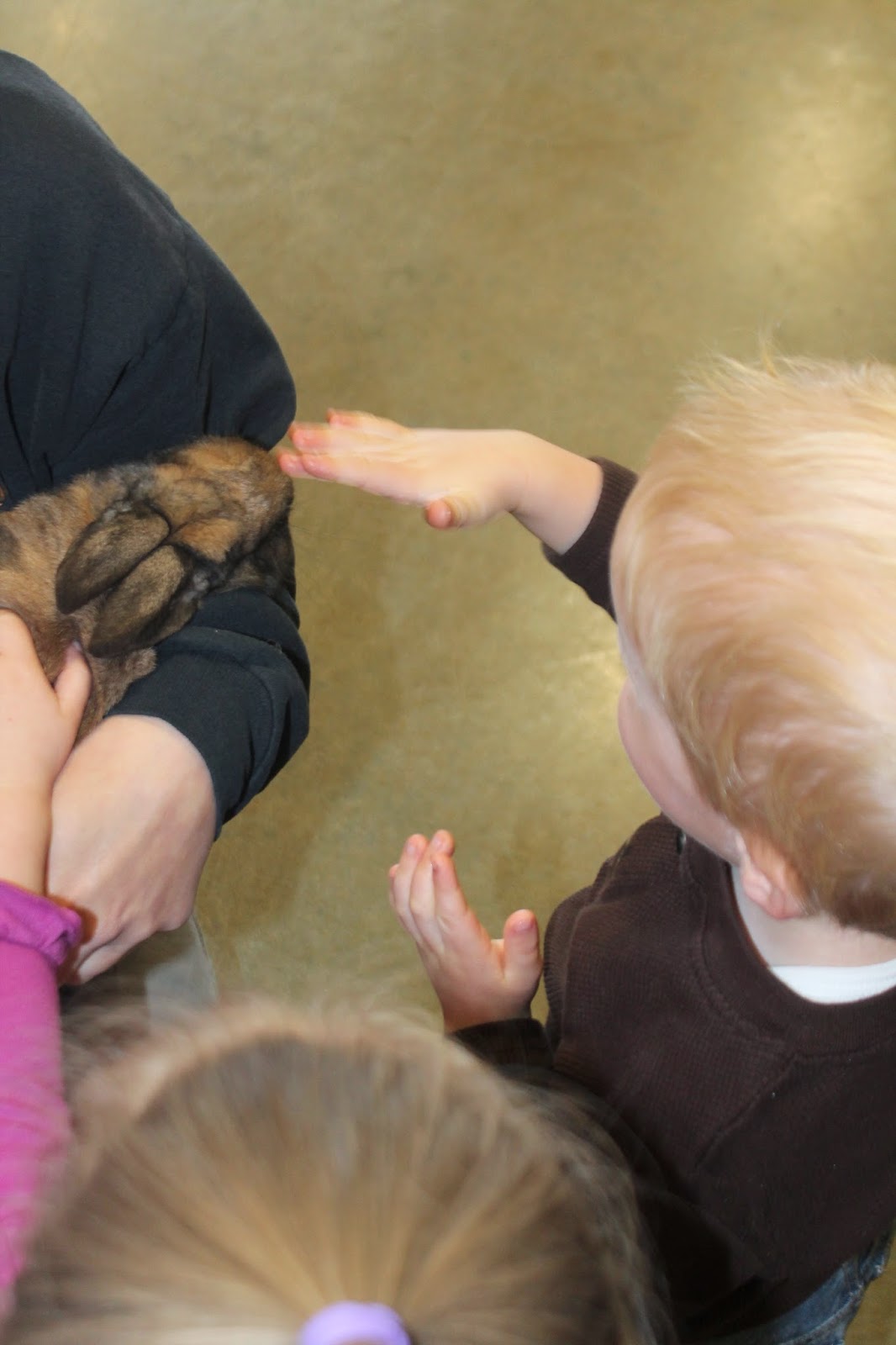 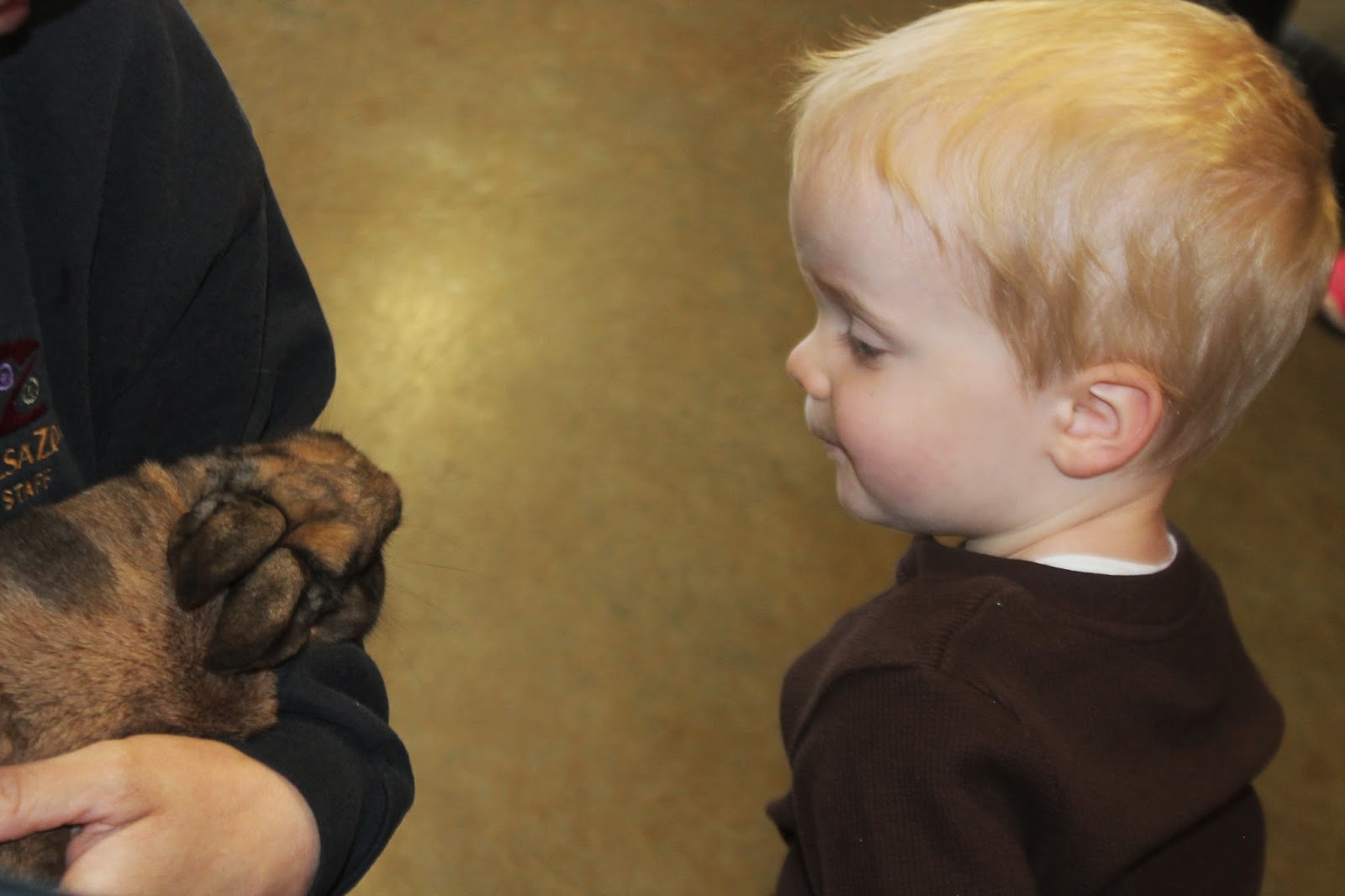 Since I pulled Elise out of the baby carrier she woke up and was hungry so I stayed at the table to nurse her while everyone else went with Carter to the craft area.  They had eggs and paper bags for the kids to decorate.  The bags would later be filled with treats and given to the grizzly bears and elephants.  Carter was quite thrilled that one of the volunteers stamped his hand with a bunny and excitedly showed me when he returned to our table.  The area was beginning to clear out and there were only a few people in line to see the bunny so my parents decided to take Carter back over to see if he'd get his picture with the bunny.  I was sill nursing Elise and really wanted to get a picture of them together with the bunny but I figured if Carter was willing our window was short.  I anxiously waited for Elise to finish eating and it worked out perfectly because she pulled off right as it was Carter's turn to see the bunny so I rushed over.  Carter still didn't want to sit on the bunny's lap but looked at the camera and smiled while my mom held him close to the bunny.  I considered that a win! 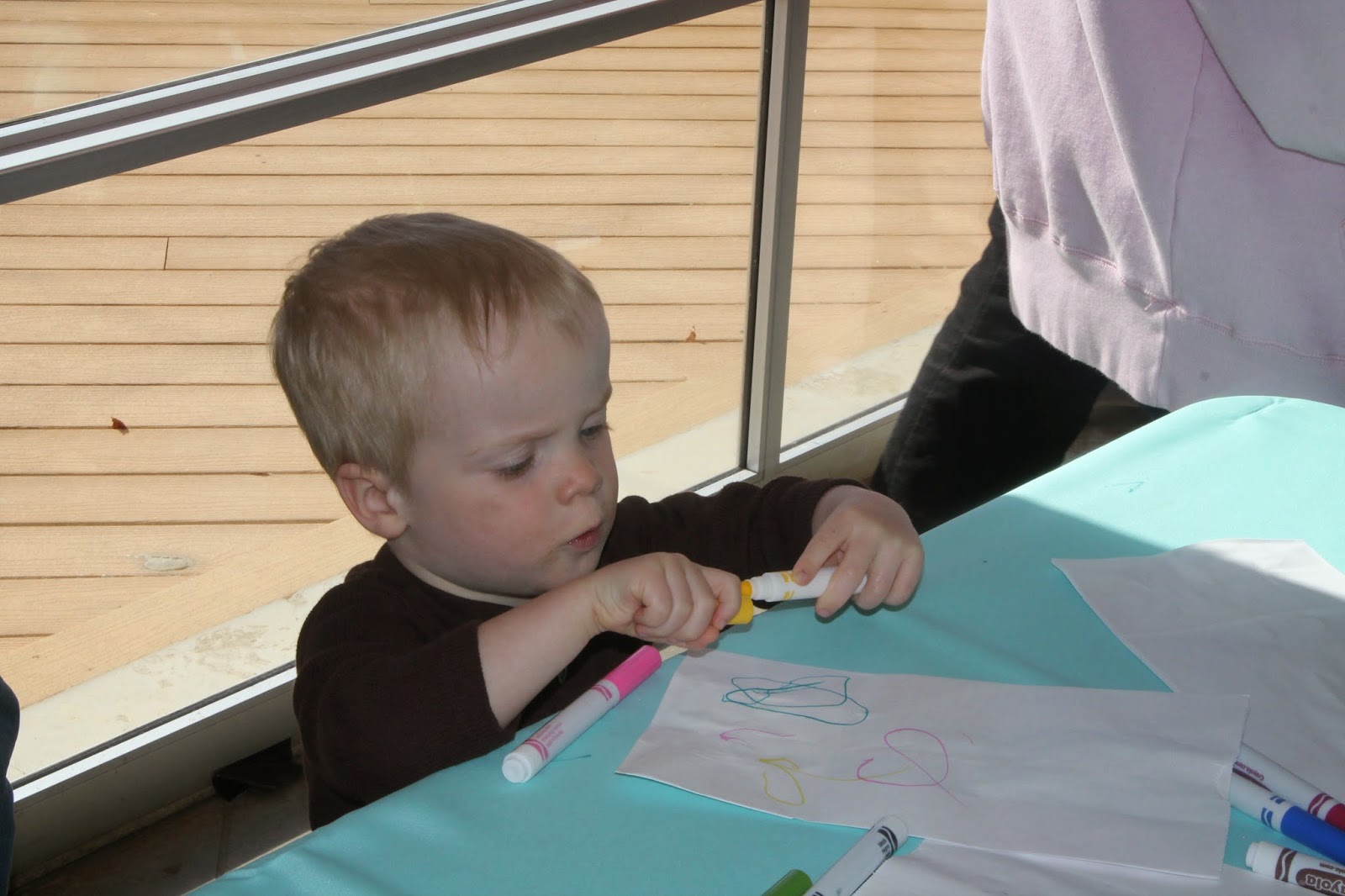 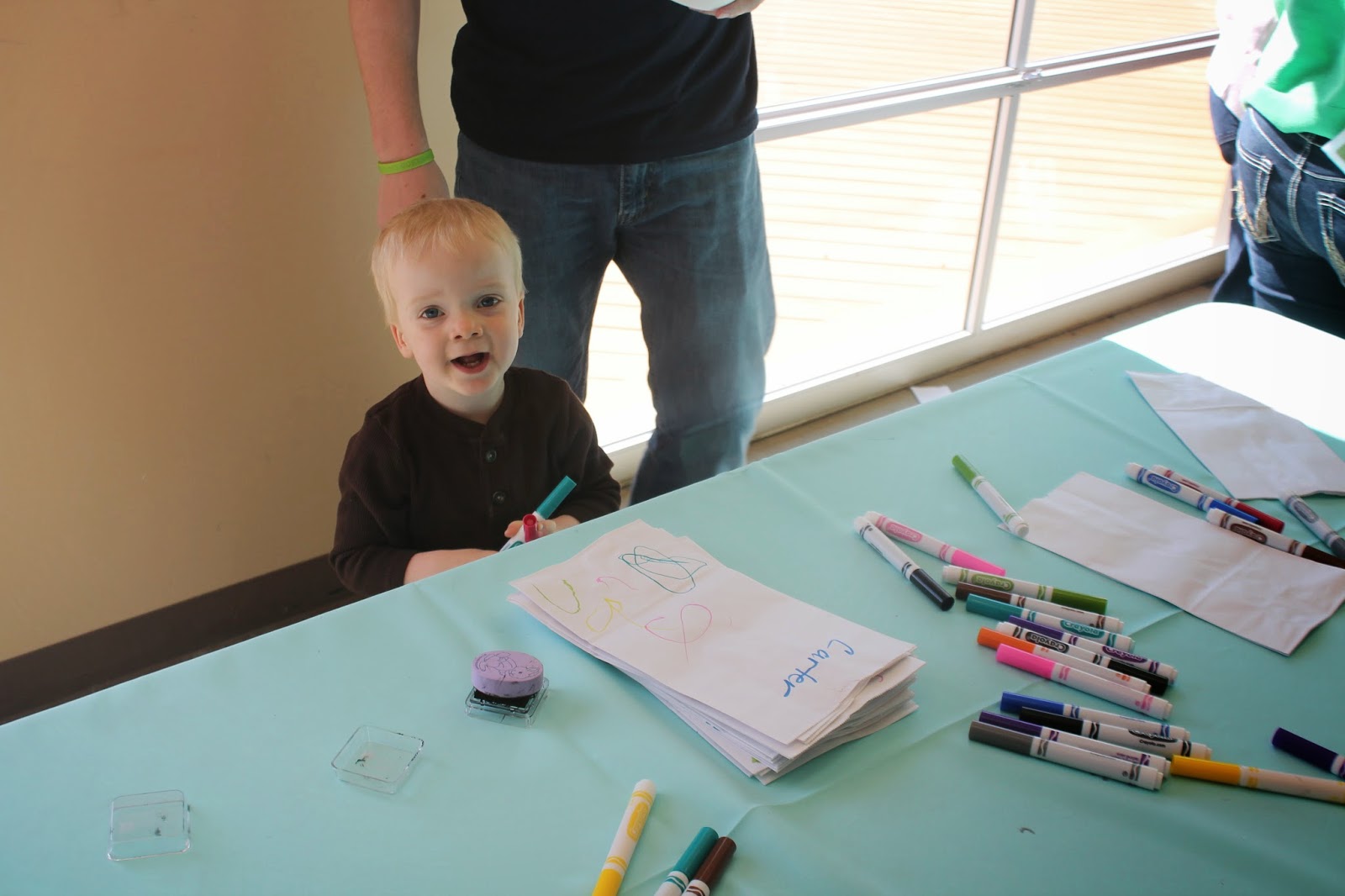 We left the Breakfast with the Bunny area a little after 10:30 and the grizzly bears were being presented with their treats at 11:30 so we played for a while and looked at some animals before heading over to watch the bears eat their treats.  They would actually rip the bags apart to get to the treats.  The elephants were being presented with their treats at 12:00 so we started heading that way after we watched the bears.  We made a stop to play at the playground and then again to see the tortoises who we caught eating lunch again which Carter loved.  When we got to the elephant area all the sacks were set out and ready for the elephants.  They opened the doors and both the elephants came rushing out.  One of them got distracted by a box filled with treats and spent most of her time eating out of it as the other elephant gobbled up all the bags.  She would actually stomp the bag down with her foot and throw the entire thing, paper and all, in her mouth.


Part of the fun of Breakfast with the Bunny was that it included unlimited train and carousel rides.  The train and carousel cost extra so I've never taken Carter on them during any of our trips to the zoo.  I knew he would love the train, which he did, and I was looking forward to seeing what he thought of the carousel since he hasn't liked carousels in the past.  We headed over to the carousel before heading home for lunch and naptime and were disappointed to find it was out of order for the day so Carter didn't get to ride it.  Later in the day Elise was super alert and had her eyes open for quite a while so I busted out the camera to get some pictures.  Carter didn't want to be in any pictures at first, but when we put Elise in his lap he was all smiles! 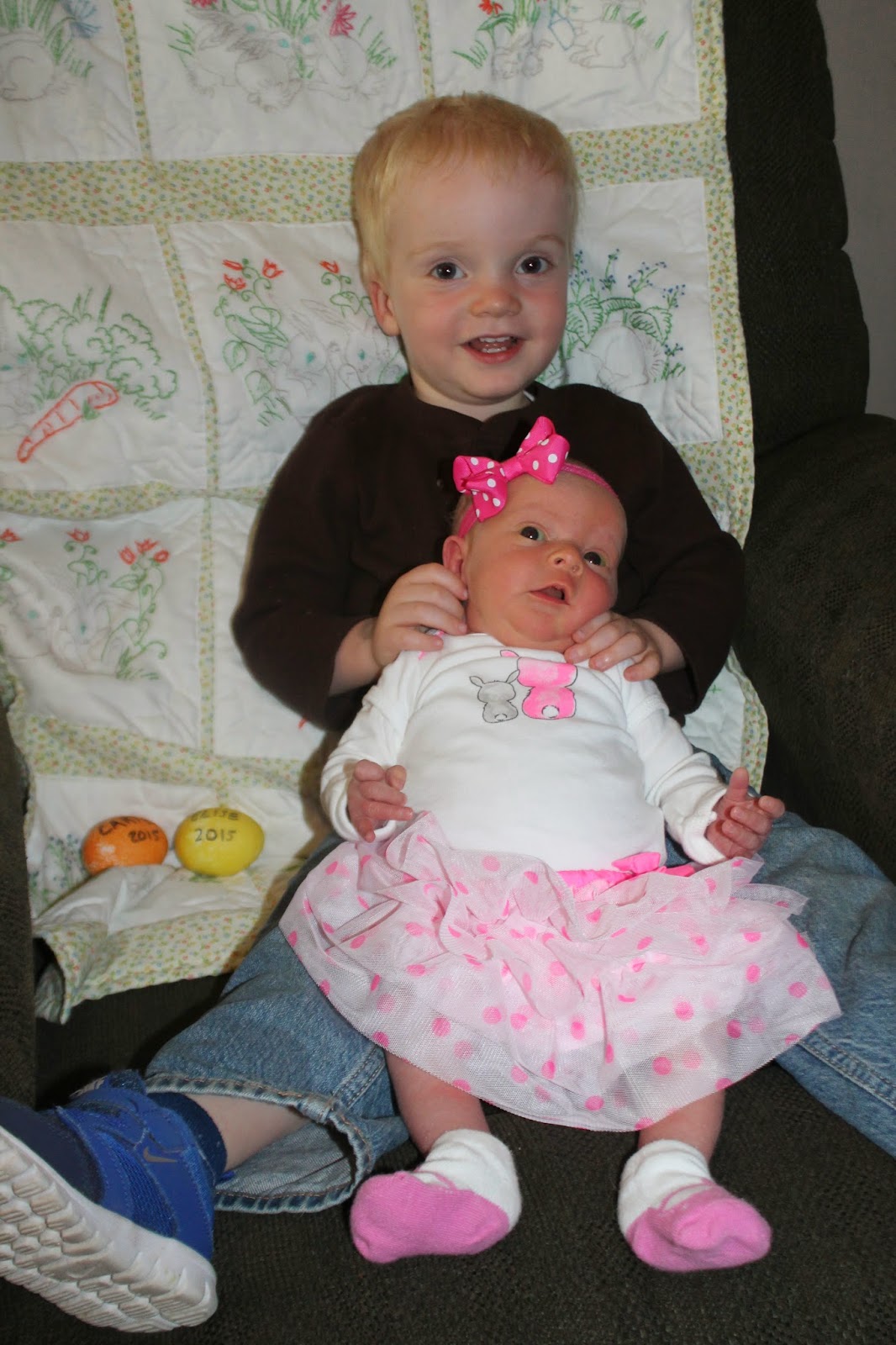 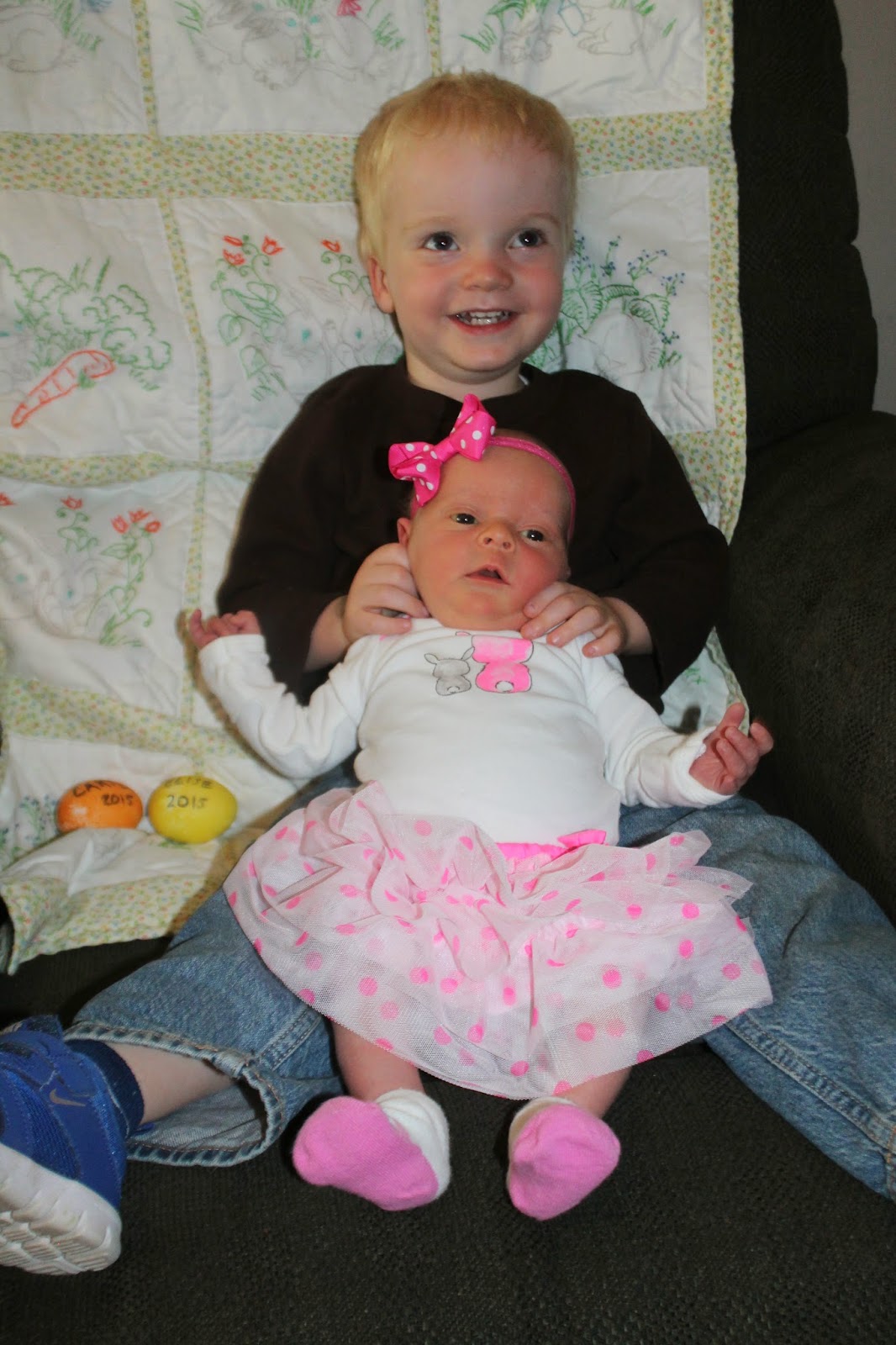 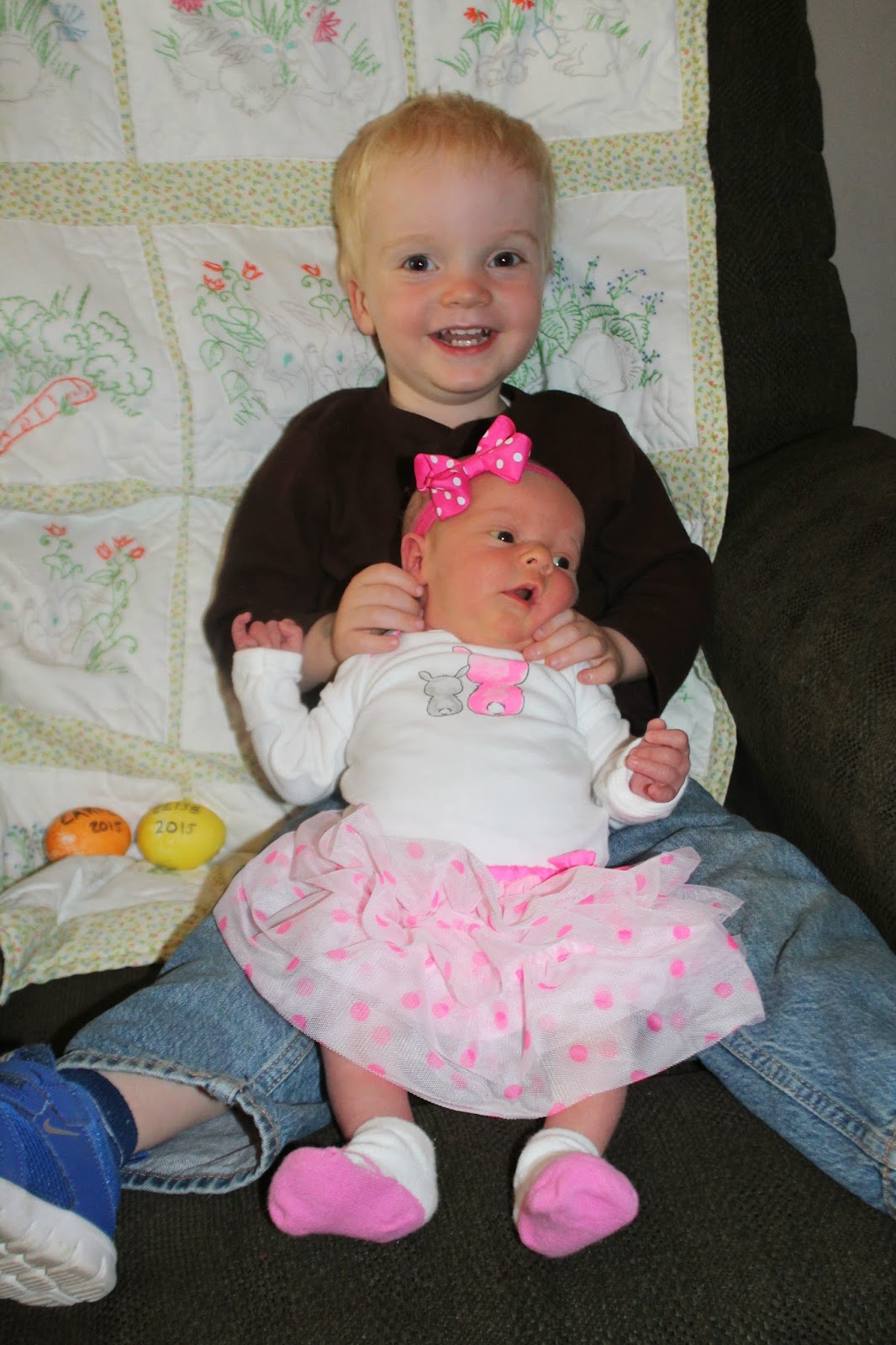 On Sunday my parents got up with Carter allowing us to sleep in which was much needed.  Elise must be preparing for a growth spurt and has been monster feeding when we first go to bed only going an hour and a half in between feedings.  Once she's had 2-3 feedings really close together she then goes her usual 2-3 hours in between.  It has been wearing me out!  My mom made bunny rolls with Carter that were so cute.  They rolled the dough into snakes and then shaped them to look like bunny heads, adding raisins for eyes.  A little before lunch the Easter Bunny stopped by while Carter was outside playing.  Carter checked out his Easter basket and then searched for eggs. 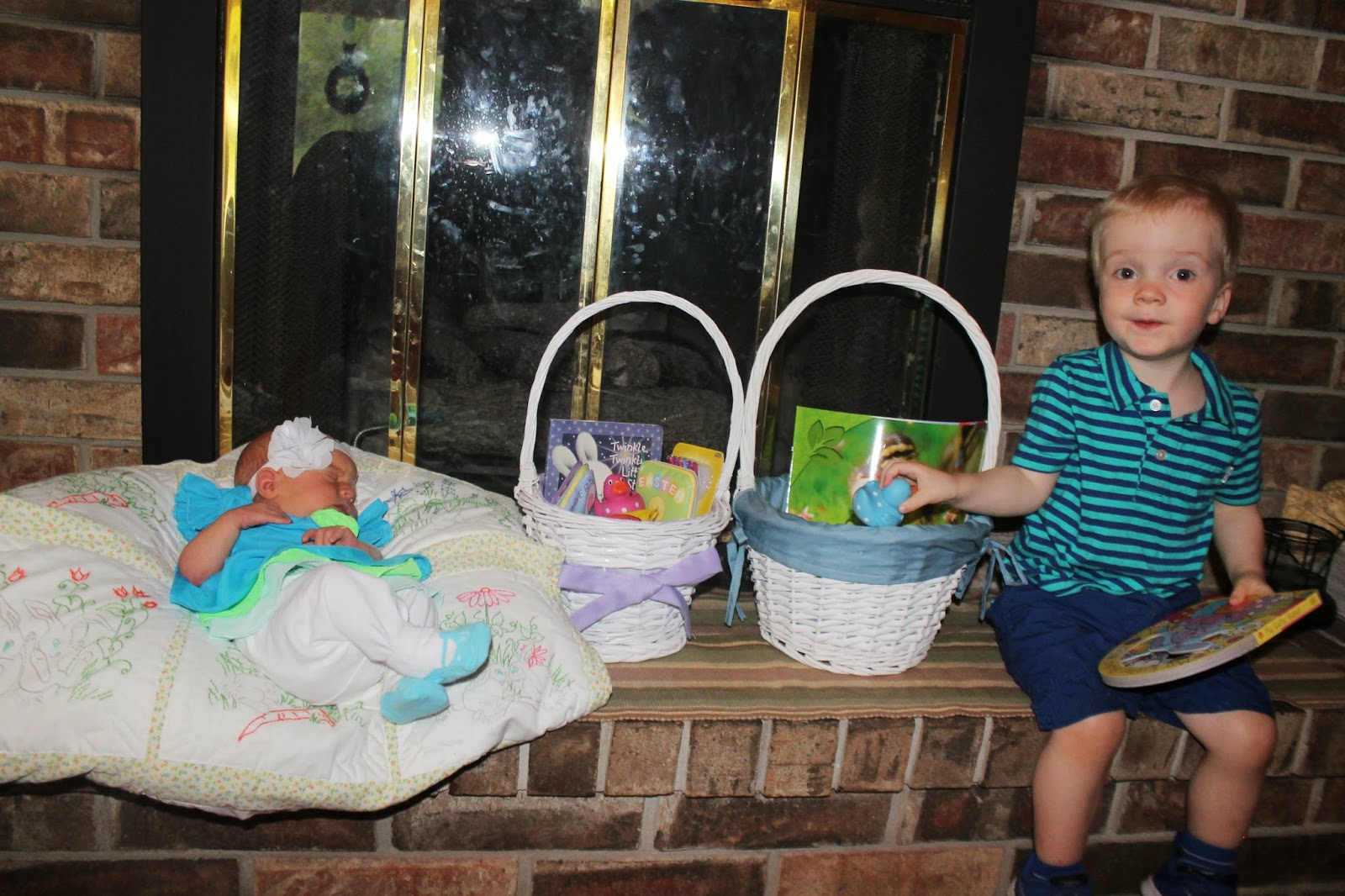 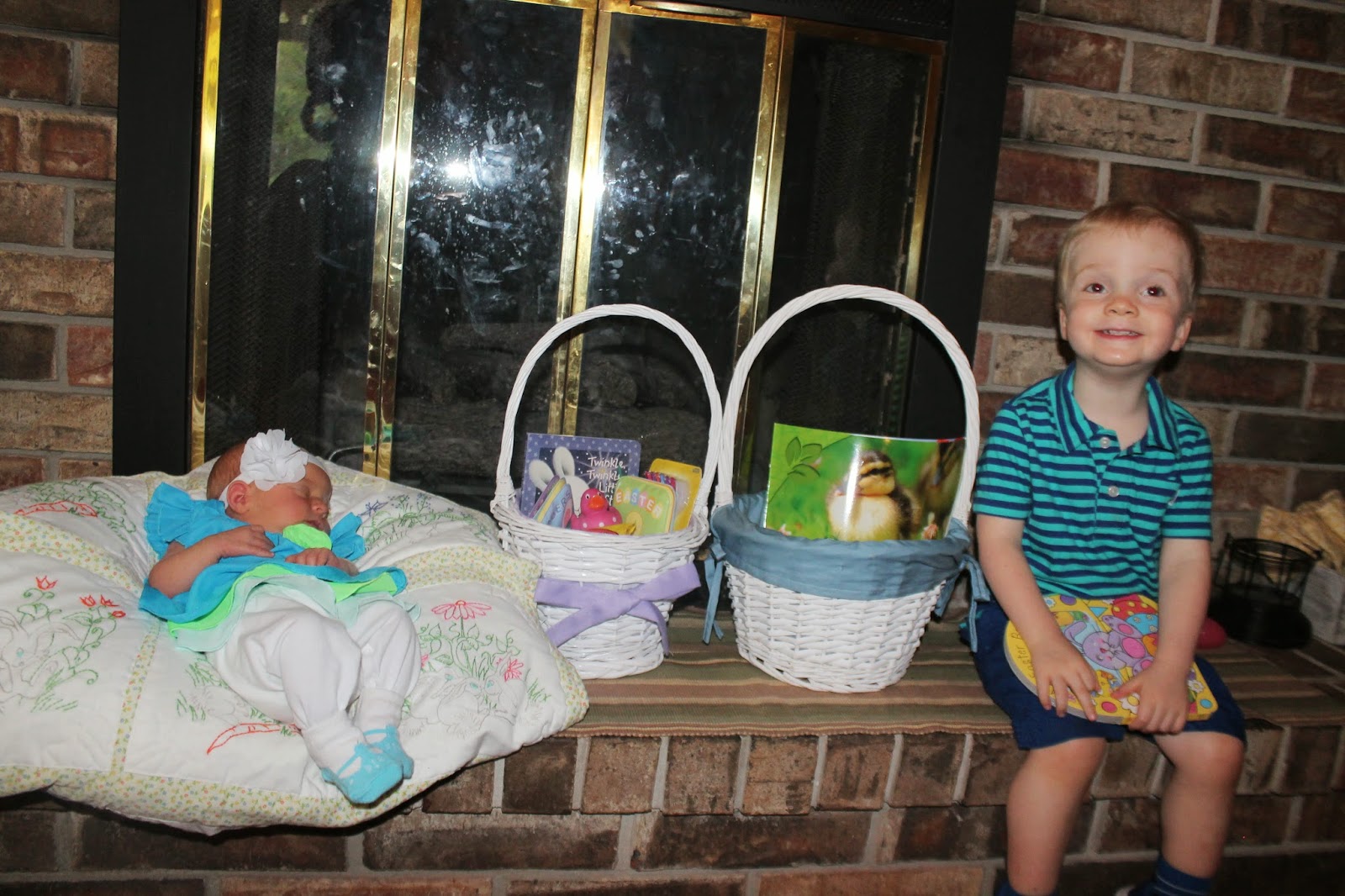 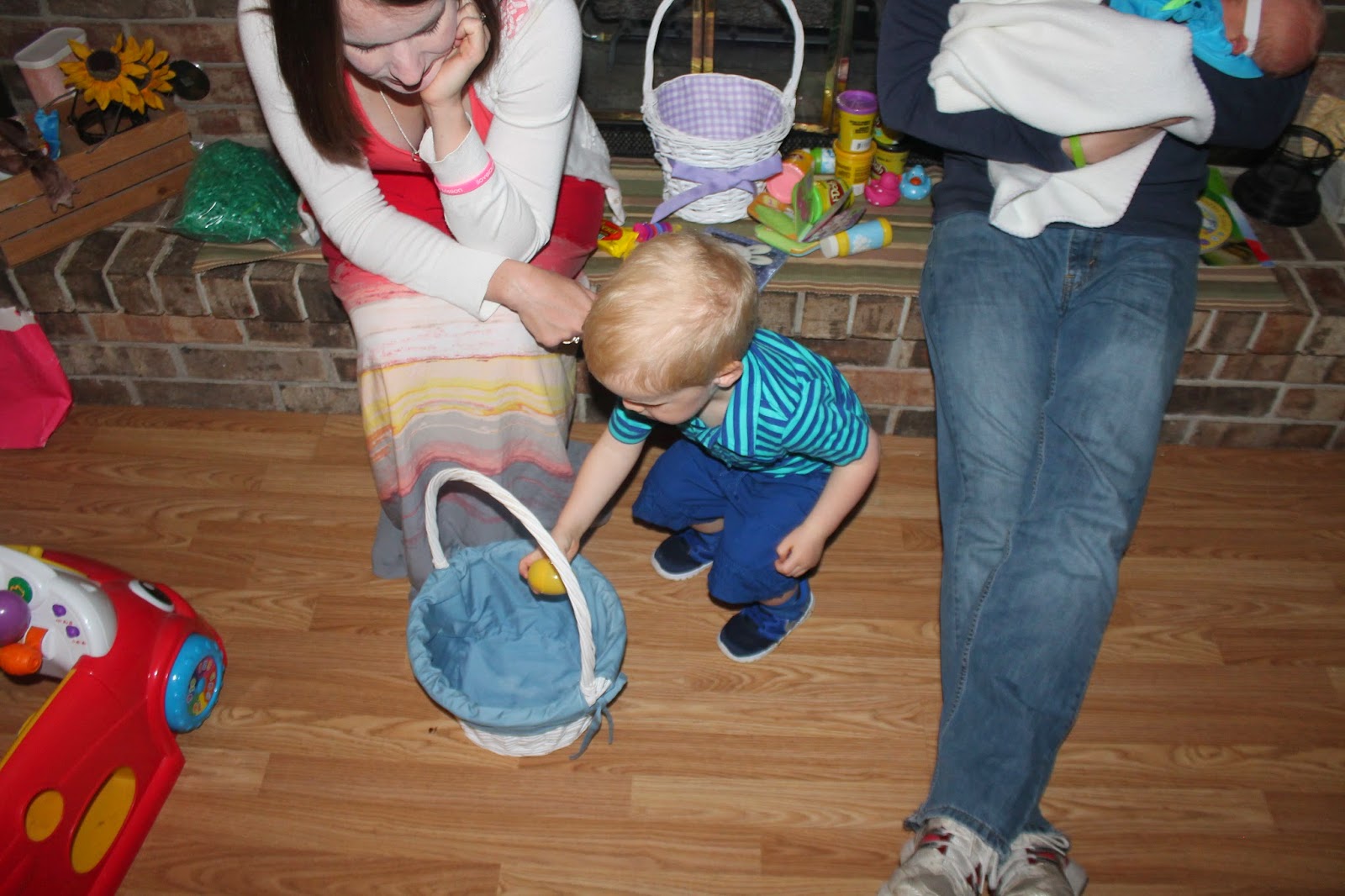 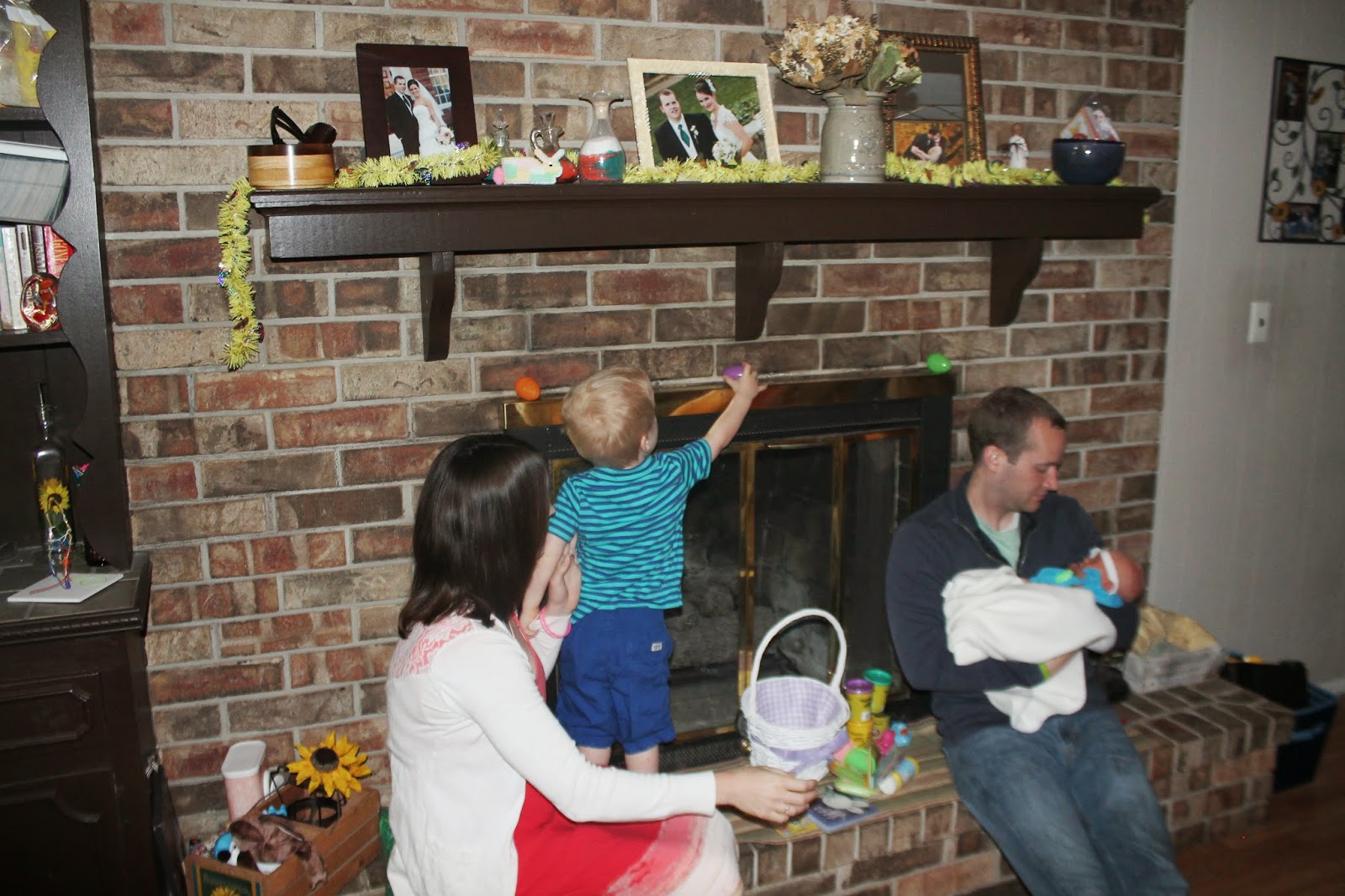 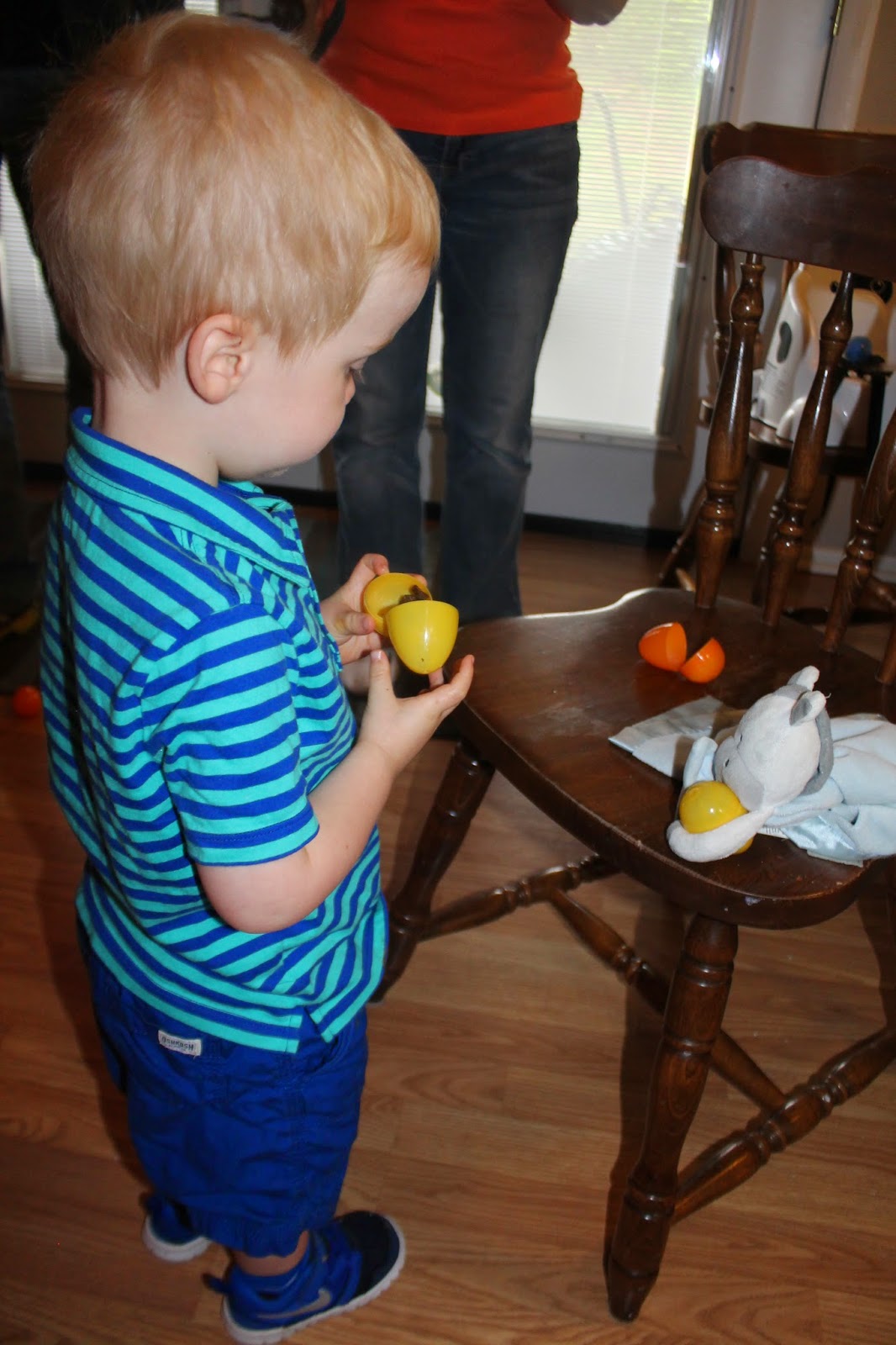 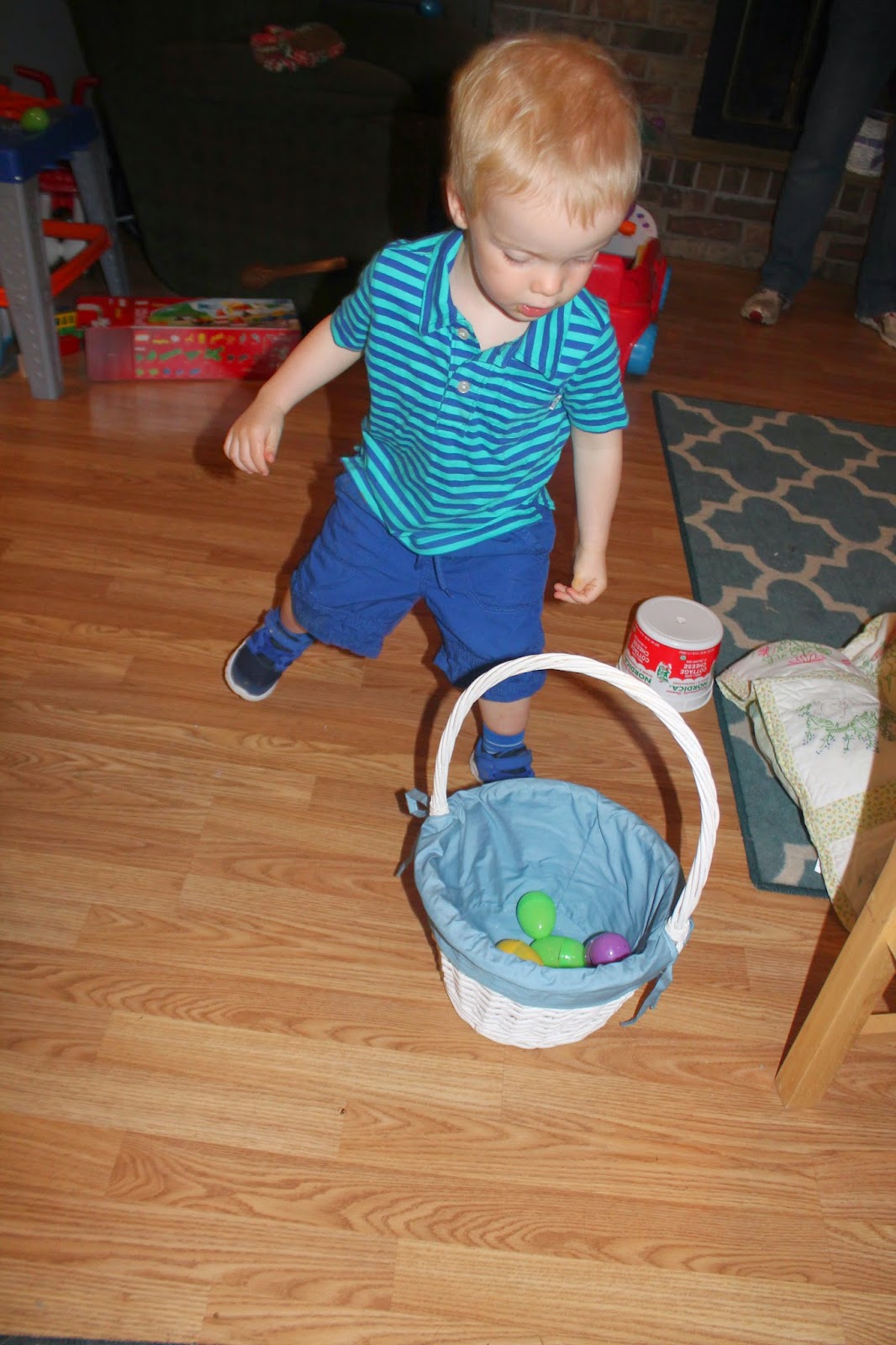 I dressed Carter and Elise in color coordinating outfits so I decided we should do a family photo before Carter went down for his nap.  As we were taking pictures Elise reached over and put her hand on Carter.  He loved it and giggled while she did it.  It was too cute!  We enjoyed ham and cherries for dinner with some delicious sides.  It was a wonderful day and an exciting first holiday for our sweet, little Elise!  I'm so glad my family all got to experience her first holiday with her and we were able to facetime Ty's parents so they could see her adorable, little Easter dress. 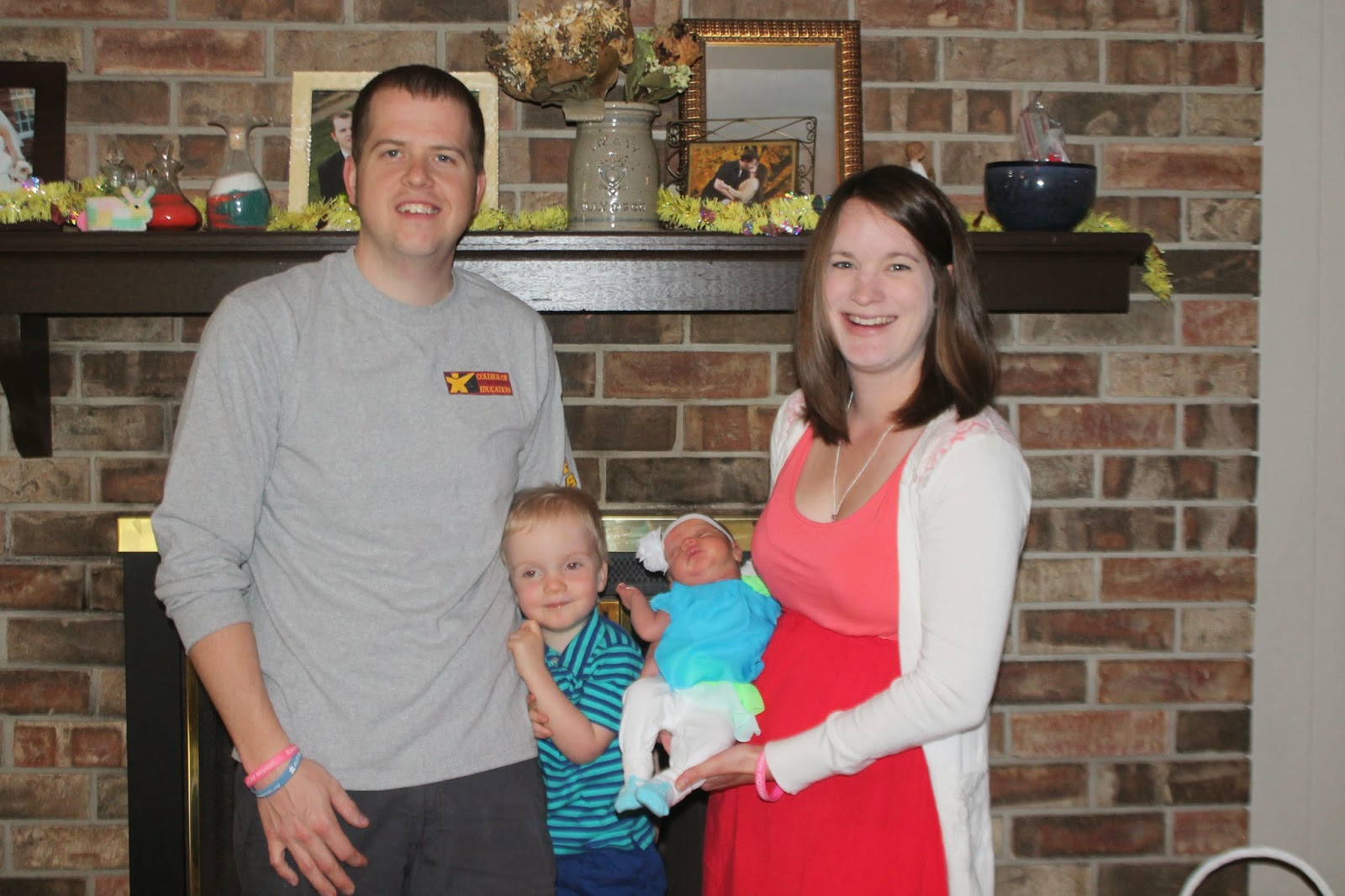 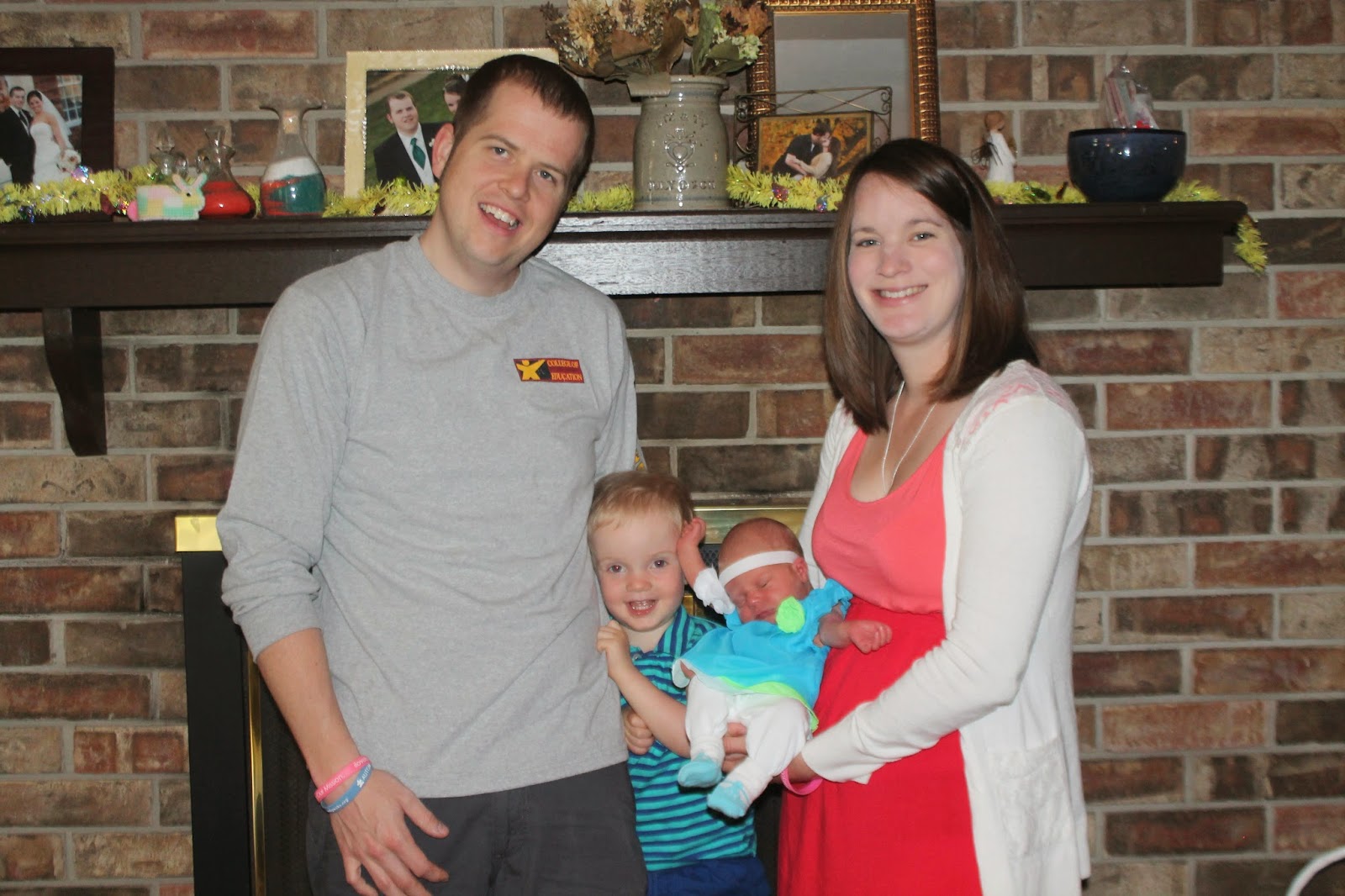 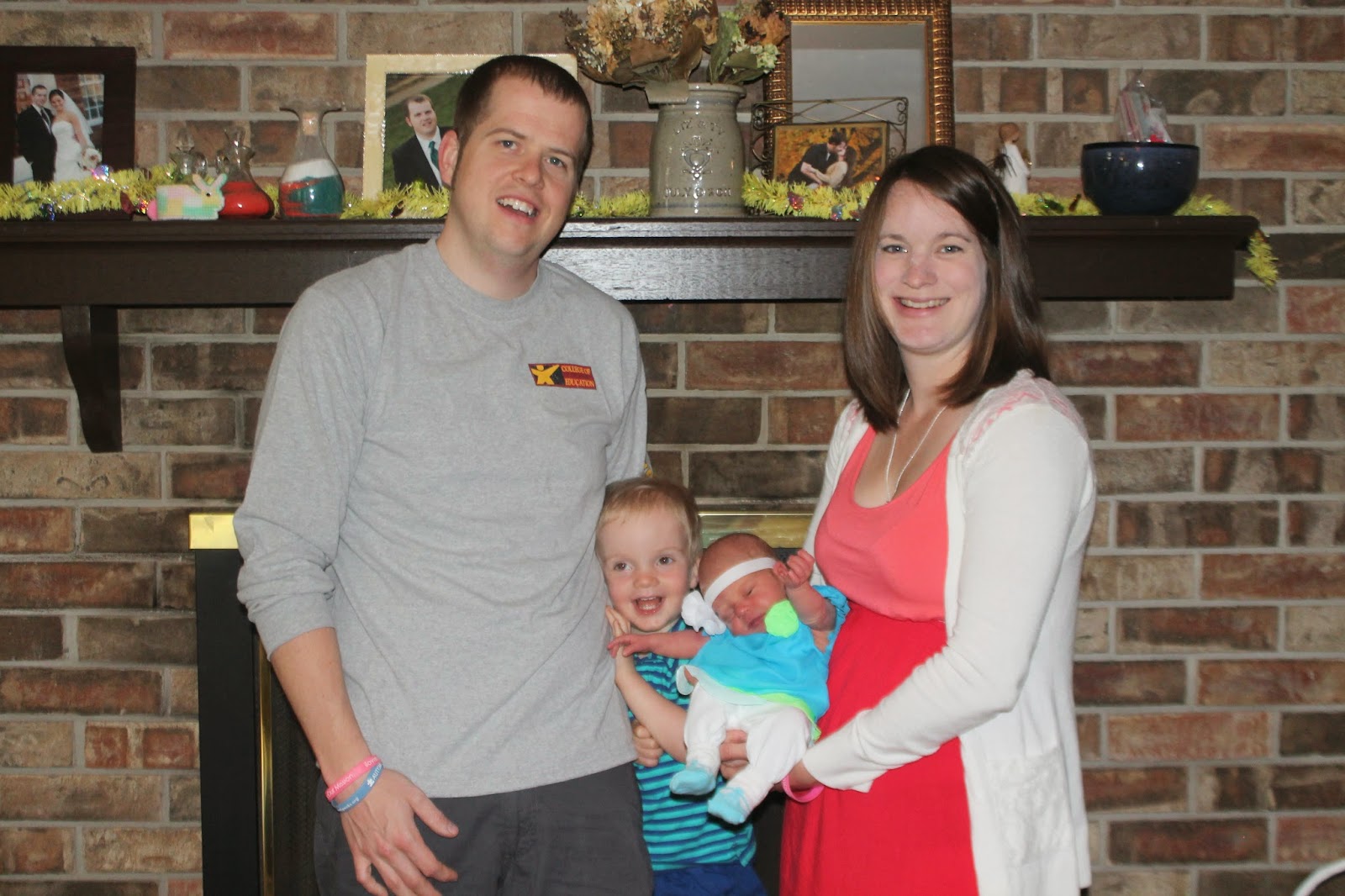 Posted by Liz Runningmomma at 11:49 AM