Yesterday was our second spring class at the zoo.  The theme for this class was food.  Our teacher's question for the day was: What do baby animals do for food during the springtime?  We arrived a little bit late because when we got in the car to leave I realized I'd forgotten to get gas the day before.  Elise woke up hungry on our ride home from the grocery store and when it comes to a crying baby vs. errands, the crying baby always wins in my world.  I can't stand to hear my babies cry!  So we stopped to get gas, putting us behind schedule.  As we walked into the classroom we saw our teacher with a small container.  Upon walking closer we realized there was a baby turtle in the container.  It was trying to climb up the side of the tank which Carter thought was hilarious.  The kids were asked what the turtle might eat and then we headed outside. 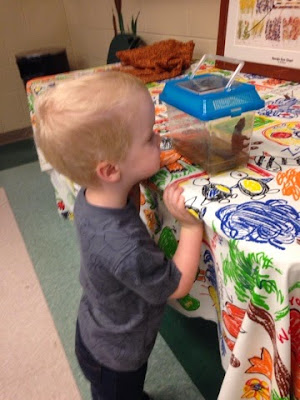 Our teacher had set out large tubs full of soil in a clearing.  Each child was given a gardening hand shovel and a plastic cup.  Their job was to dig through the dirt in an attempt to find worms.  It came as no surprise when Carter immediately dug into the dirt.  He ended up finding 4 worms and even though all the worms in his tub were found, he kept on digging.  I'd have to say it was probably his favorite activity we've done at any of the zoo classes we've gone to.  We were instructed to put our worms back into the tub and make sure they were covered with soil.  Our teacher chose one worm to take back into the classroom and feed to the turtle.  We watched for a while but the turtle wasn't interested in eating so we headed back outside. 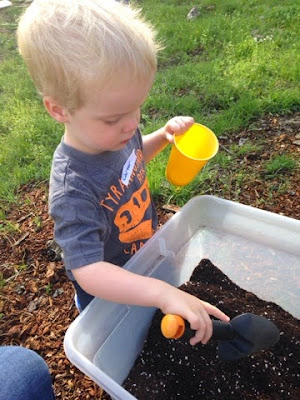 Each child was given a clipboard with a paper showing different animals in one column with a blank column beside the animal for recording foods they might eat that we found out on the nature trail.  We were also given a page of stickers.  When we found something one of the animals might eat we were instructed to put a sticker in the blank column next to the animal.  During our walk we actually found quite a few things animals would eat and even found tent caterpillars up in a tree inside a silk tent they had made.  It was really cool.  I didn't take a picture, but if you google tent caterpillars you can see what their tents look like.  Carter enjoyed sticking the stickers to his paper and rummaging around in search of plants and bugs. 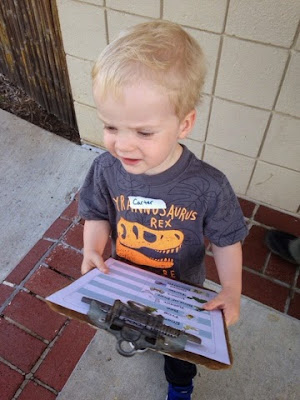 The food search ended our session and we again headed out to see some animals and play at the playground before heading home.  We happened upon the tiger enclosure right when 3 baby tigers were let out to play for the first time.  There were zoo keepers next to us taking pictures which was how I found out it was their first time out on exhibit.  They said the tigers were about 8 months old.  Carter thought they were hilarious chasing each other and playing.  It was pretty exciting to get to see the tigers during their first time out for visitors to see!
Posted by Liz Runningmomma at 12:02 PM

Email ThisBlogThis!Share to TwitterShare to FacebookShare to Pinterest
Labels: zoo