Woo hoo, we made it another week!  This week is the one I've been the most nervous about for a while, making it from 35 to 36 weeks.  Ever since Carter was born I've been worried that Baby #2 would come even earlier than Carter did and I for some reason have been worried she will come during week 35.  I'm much calmer about it now that I'm not running because I feel like that will definitely help me make it longer.  This week will be a busy week with a playdate planned every single day of the week and Elise's baby sprinkle on Saturday.  Now to make it through this week and then we'll just have one more week to full-term! 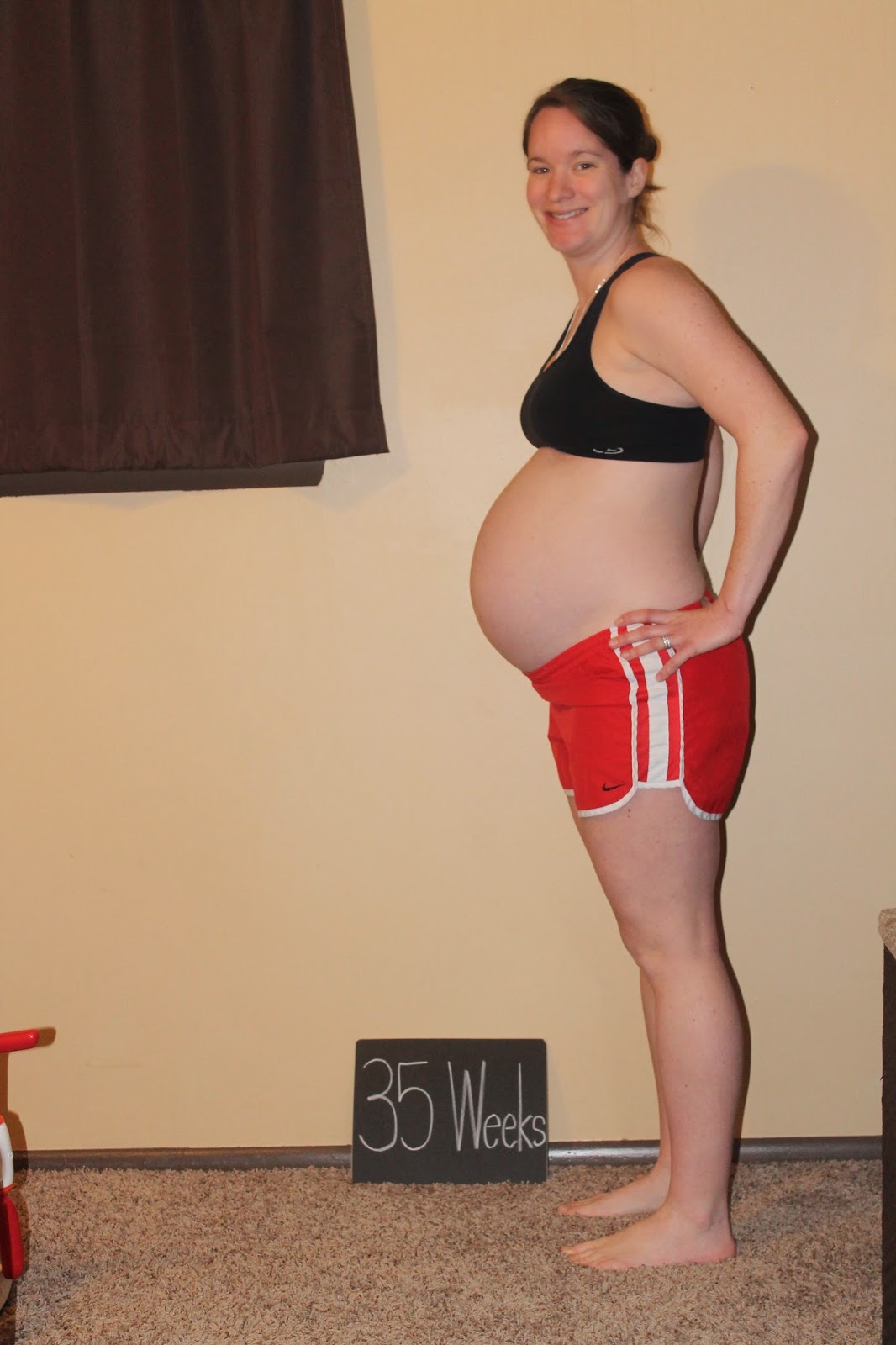 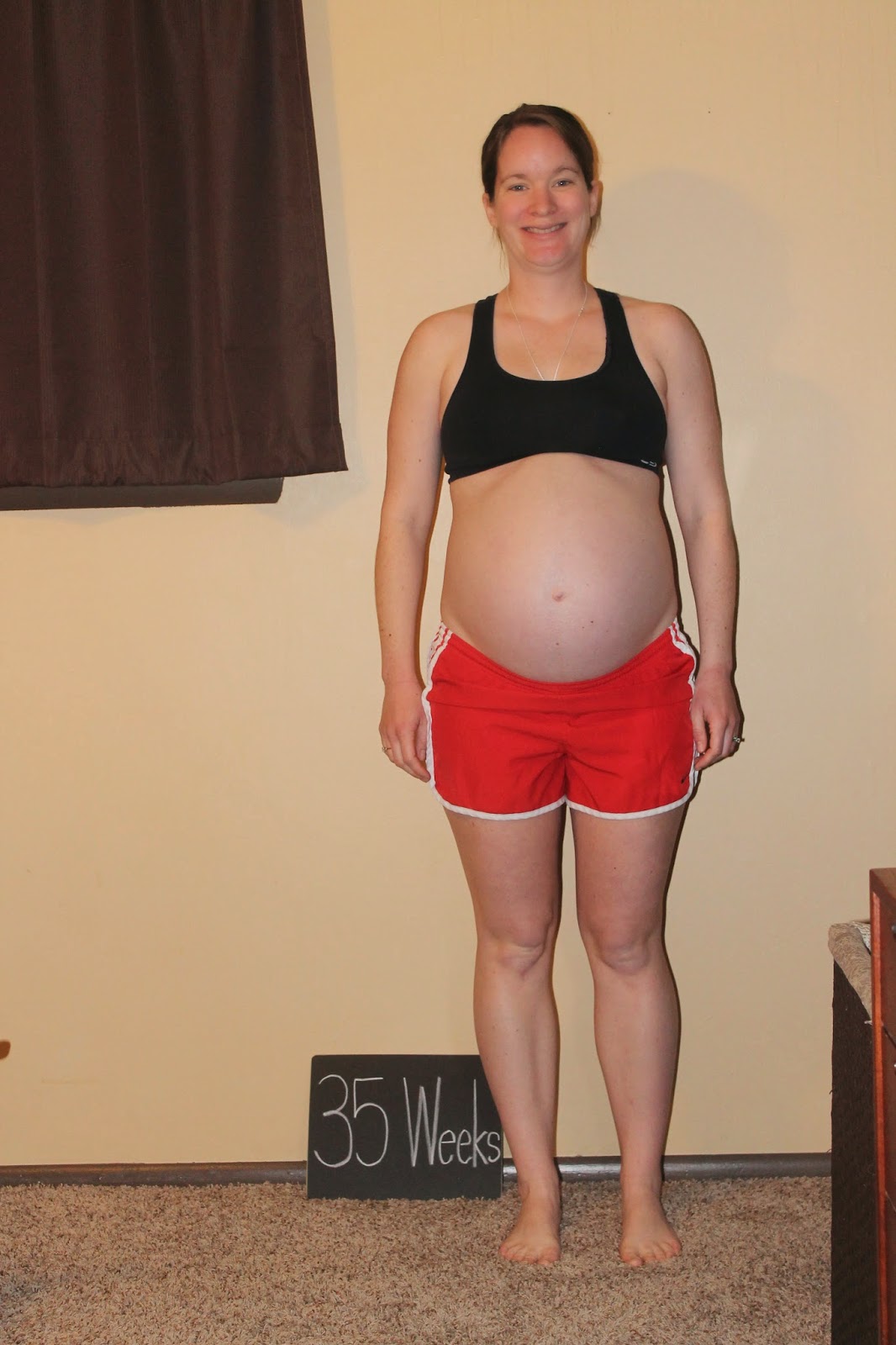 Baby's Size: She should be over 18 inches and around 5 and 1/4 pounds.  We'll find out at our appointment on Monday if she's still measuring big.  According to my baby app she should be running out of room and having fewer big movements, but sister is still pretty wild and crazy!  All basic physical development is now mostly complete and baby will just be putting on weight these last few weeks.  That is a relief to read!

Weight Gain:  Taking this week off from weighing in.  We'll see what I'm at next week.

Maternity Clothes: I'm amazed I still have a few non-maternity sweaters that are long enough especially with a tank top underneath.  Although I'm noticing my maternity tank tops aren't covering my belly with as much excess at the bottom as they used to!

Sleep: I definitely started getting more tired this week.  That may be in part due to waking so much at night to use the restroom as well as skipping naps most days this week.  The days I did nap I kept it to 30 minutes at the most.  I'm also having a harder time sleeping at night.  I'm uncomfortable sleeping on my sides, but when I sleep on my back I snore really loudly.  There have been so many times I wake up on my back.  It's crazy.  I worried about sleeping on my back with Carter but the doctor assured me if it was a problem to where baby wasn't getting enough oxygen, I wouldn't be either and I'd wake up.  So I haven't worried about it this time.  Ty has noticed because he wakes up and I'm snoring.  He says I only snore on my back.  One night Carter woke up at 4:30 am and cried really hard.  Ty went in to console him and he continued to scream and cry so I went in.  By the time I was in there his blanket was soaked from snot and tears, it broke my heart.  He stopped crying when he heard my voice and wanted me to lay with him so I did.  I was really tired and wanted to sleep, but he was playing with my hair so I couldn't.  Then any time I'd start to fall asleep I started snoring and Carter would say, "Oh no, oh no, piggy!" which would wake me up.  I started to get frustrated but then reminded myself that once Elise comes I won't be able to lay in bed with Carter to console him because I'll need to be available to nurse her.  It really made me appreciate having the chance to snuggle in bed with my precious boy!  I had a dream that Elise came during this week and had to be transferred to a different hospital for the NICU (although the hospital we will deliver at has a NICU).  I decided to run to the other hospital and the roads were all icy and I kept falling and sliding across the road.  The weirdest thing was how calm I was.  I wasn't at all worried about Elise, I just wanted to be with her.  While I was running I kept thinking how awesome it felt to run again (although I'm sure that would not actually be the case immediately after delivery).

Symptoms: My back has been super sore and makes sitting down uncomfortable.  I'd rather be up and moving around but sometimes I'm just so tired I want to sit!  In the evening my feet look a little swollen.  I just got new running shoes last week and they feel tight so I think my feet are bigger right now.  My rings still fit though and are only snug first thing in the morning.  My belly button still isn't fully popping.  The top half is out and the bottom half is in.  Contractions have really eased up this week, I think due to not running.  I'm still having a few, but they aren't very painful and are not as frequent.  That's a good thing!  I've been having more accidents lately and have less control of my bladder.  It snowed over the weekend and we went sledding Saturday before Carter's nap.  He had a blast.  I rode down the hill once with Carter and when I went to get out of the sled I had to roll to my hands and knees because I couldn't get out of the sled.  It put too much pressure on my bladder so I peed a little in my pants.  I also have less control of my body.  Carter and I were riding down a slide at the park later in the day.  The snow made us go much faster and threw us off the end of the slide.  I couldn't stop myself and slammed into Carter's back which pushed his face into the snow, poor little guy!

Running: This was my first week of walking rather than running per doctor's orders.  At first I was a little bit bummed because running was going so well this time and I was enjoying it so much.  I was also worried I would get lots of calf cramps because on days I didn't run I would wake up with calf cramps during the night.  Fortunately I've enjoyed walking, it's so relaxing and I haven't had an increase in calf cramps!  When I get passed by people running it makes me itch to run so badly, but other than that I'm pretty content walking.  At first Carter wanted out to run and walk since we were going slowly but after a couple days he got used to walking instead of running and sat content in the stroller.  I've found that there are some advantages to walking over running.  I don't feel like I'm going to pee my pants the whole time.  I don't have contractions while I walk like I did when I ran.  But best of all I can talk to Carter as we go.  Since I can talk more he likes to peek back through the stroller at me and we play Peek-a-Boo.  It's the best!  So for now, to ensure Elise is big enough to be born, we are sticking to walking and it is going really well.  I'm not going to say I don't miss running, but walking is a good substitute for now.  If I hit 37 weeks you bet your bottom I'll be back out there attempting to waddle/run!  I kept my walks short mostly due to the cold and Carter's desire to get out and play at the park.  We walked 1-2 miles a day for a total of 9 miles for the week.

Food Cravings: Being at my parents' house this weekend I got to eat Bamboo Palace, my favorite Chinese place.  It was amazing and really hit the spot!

Food Aversions: Still not enjoying smoked foods.  We went to a barbeque restaurant over the weekend and I did okay eating a pulled pork sandwich but felt sick later that night.  Nothing too bad though.

Movement: She's still moving a lot!  I love looking down and seeing a huge bulge sticking out of my belly.  My mom was watching her move around Saturday night and really got a kick out of it.  She said none of us moved as much or as strongly as Elise does.

Best Moment of the Week: We went to my hometown this weekend for my best friend, Erin's, baby sprinkle.  I hosted the sprinkle with 2 other friends and it went really well.  We got a lot of snow that morning so a lot of people ended up not being able to come, but we still had a blast and I enjoyed the more intimate setting.  Of course we got a bump picture since we were together!  The next day I got to go over and visit one of my other really good friends, Melissa, and her girlfriend, Liz.  They had their 2 month old twin boys, Wesley and Graham, with them so I got to meet them and hold them and they are precious!  Wesley and Graham were born at 35 weeks and are doing great.  They didn't spend much time at all in the NICU (less than a week) so I feel much better about where I'm at.

Currently Loving: My mom sent us home with the curtains, valances, and crib skirt for Elise's room.  We put the curtains up last night and Ty and Jeremy raised the crib and put the crib skirt on tonight.  Elise's room is now completely finished!  I'm loving it and will post pictures later this week.  Since this past weekend was our last trip before Elise arrives I was able to use my duffle bag to start a hospital bag.  It's exciting to know we just have 2 weeks until full-term and she could arrive anytime after that!  We also had my mom take some maternity pictures for us while we were visiting so that's another thing I can check off my list of things to do!
Miss Anything: Being able to sit down comfortably and sleeping on my belly.  I am really looking forward to rolling over to my stomach that first night at the hospital.  It was a magical moment for me after Carter was born.  I've already woken myself up a few times by attempting to roll to my stomach in my sleep.  Say what?!!?  How does that even seem like a good idea!

What Big Brother is Up to This Week: Carter enjoyed the snow this week and the day of warmer weather we had.  When it was in the 50's we took a walk from our house and I let him hold Harper's leash.  He had a blast and laughed the entire time!  He enjoyed playing with Hayden when Ty came to pick us up from the baby sprinkle.  He and Hayden ran laps together.  Randomly yesterday he pointed at the crib in the nursery and said, "Issy Eese nap here".  It was very cute!  He's really starting to understand that it's her room, I think a lot of it has to do with it looking so different from when it was his room. Week 35 Bumpdate with Carter. 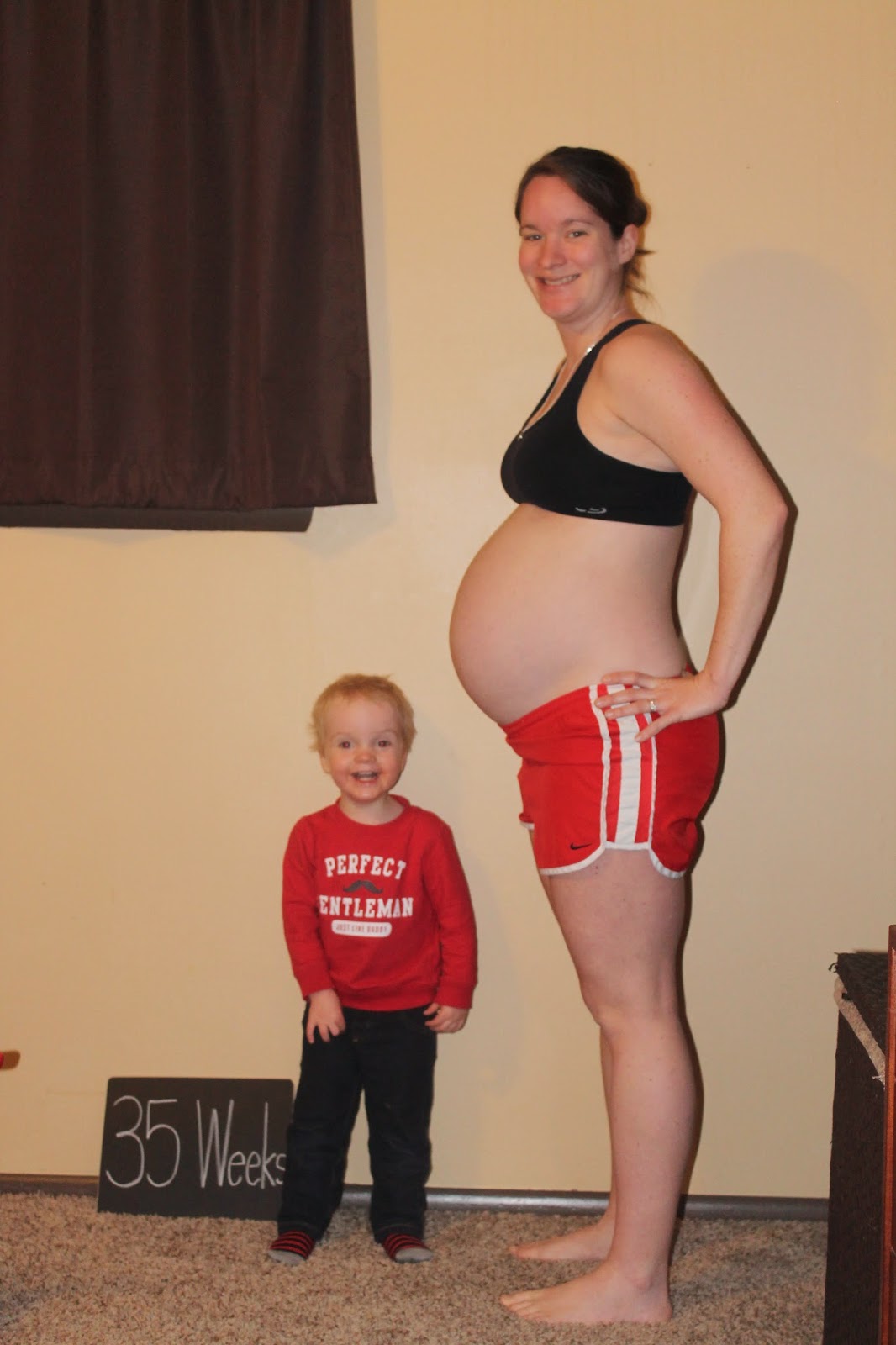 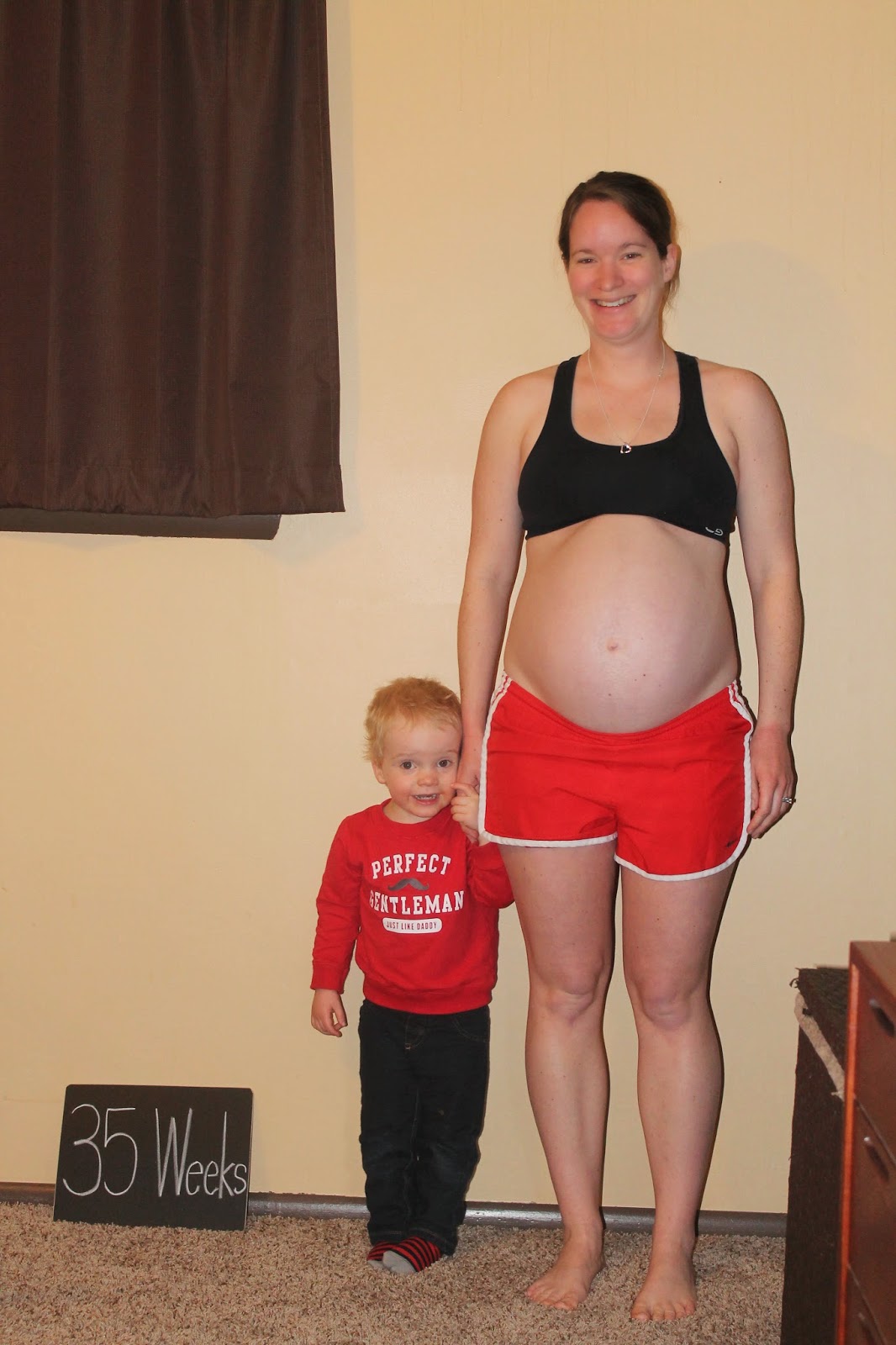 Posted by Liz Runningmomma at 7:02 PM