Boom, we made it!  Here we are at full-term.  All I can say is that I feel so calm now.  I know it's a little bit crazy but I'm fine with her coming tomorrow or in 2 weeks.  The weather has been beautiful and I've been having a blast playing outside with Carter!  I'm really soaking up our last days just the 2 of us.  This week we have a playdate planned every day except for Wednesday so I know the week will go by quickly.  For the first time in a while we have no weekend plans other than hopefully hitting up some garage sales and relaxing.  I'm excited for a quiet weekend just the 3 of us, although it would be perfect timing for Elise to arrive...  Before we know it we will be at 38 weeks and then it really will be an any day kind of a thing.  I don't feel like labor is coming soon, but I certainly didn't feel that way with Carter either, so there's really no telling!  Carter woke up a little earlier than usual this morning so we did the pictures before Ty left for work.  I guess I wasn't fully awake now that I look at my tired eyes! 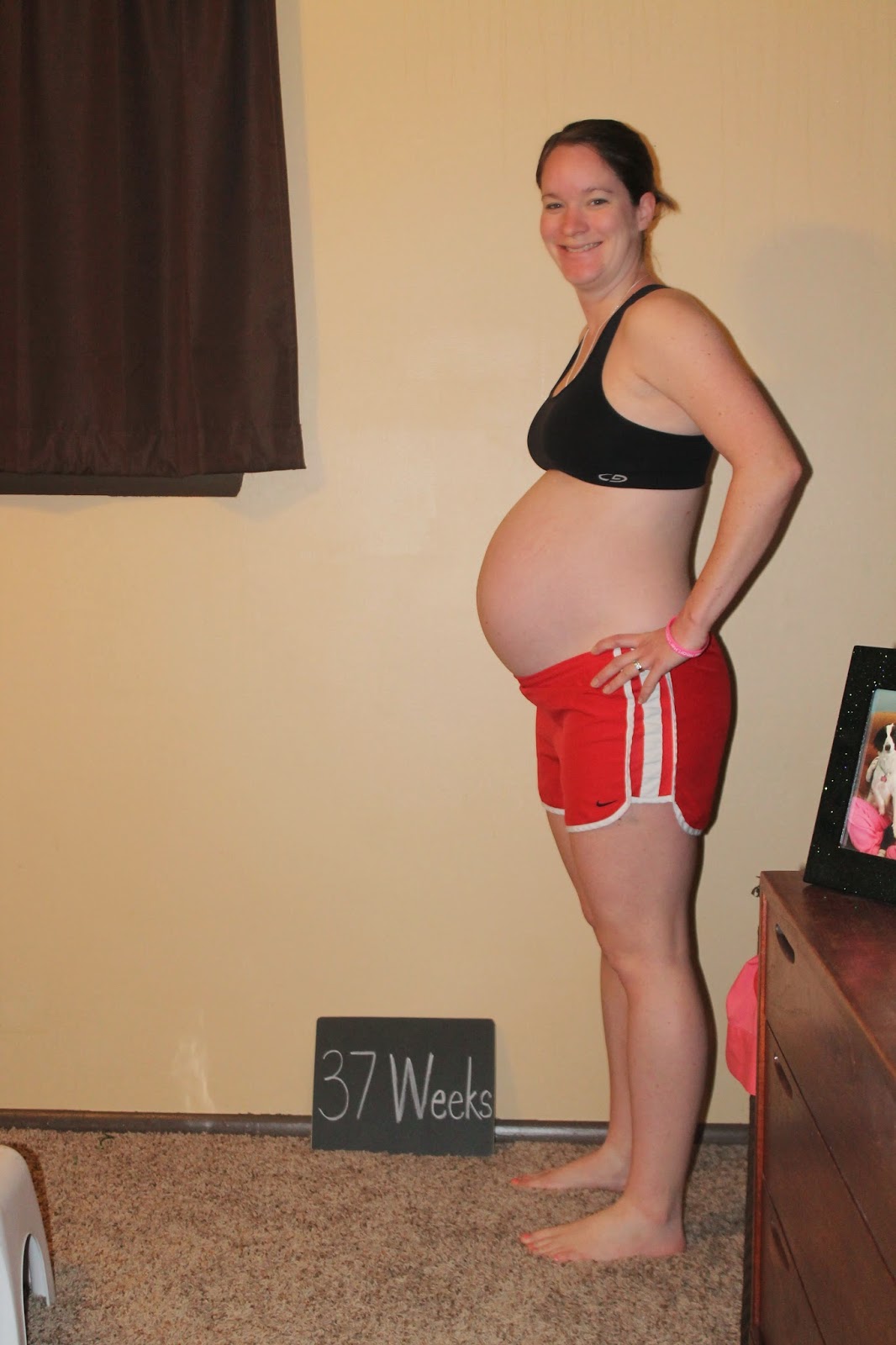 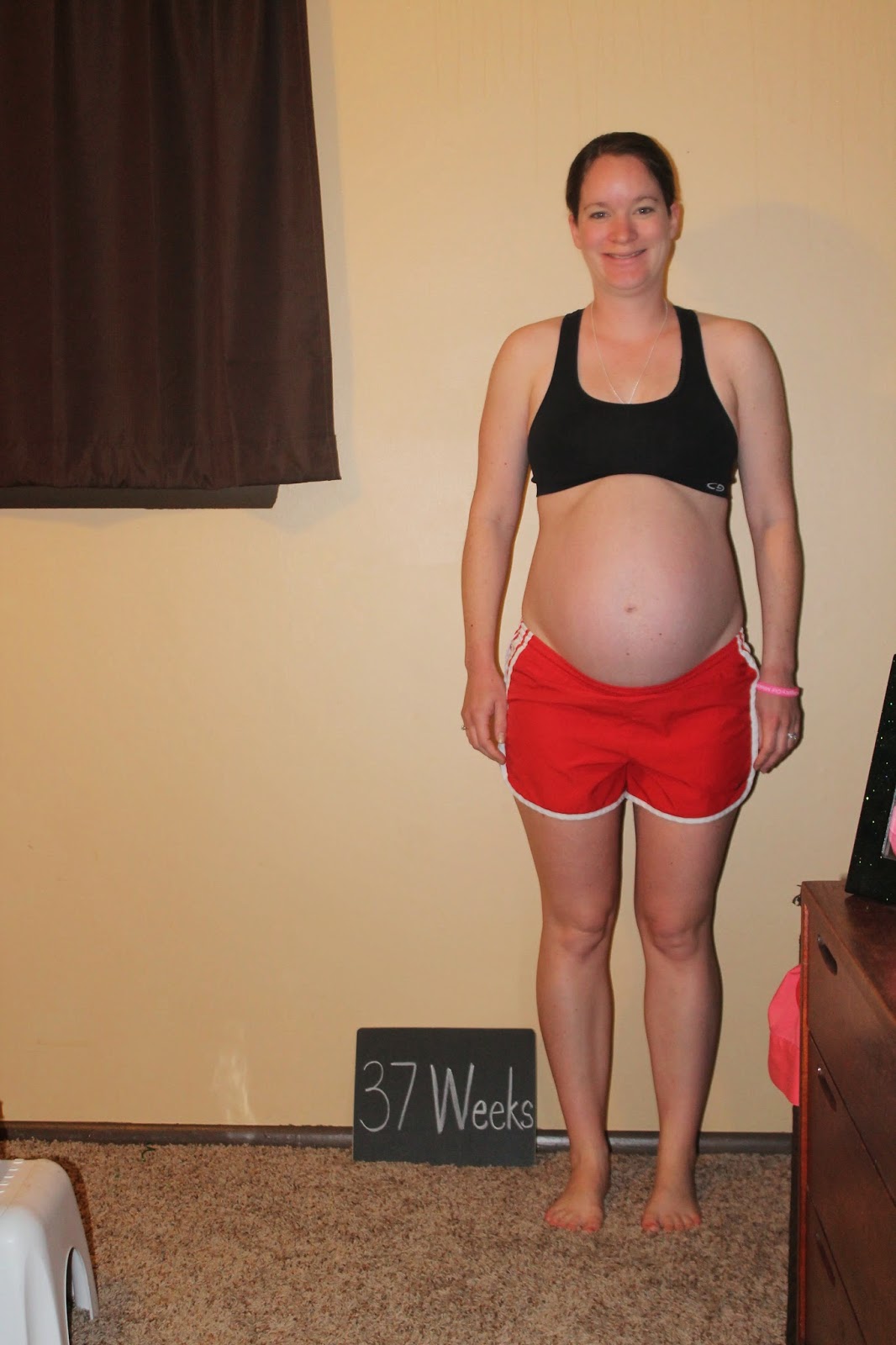 I had my doctor's appointment today.  Going into it I was a little bit nervous.  I knew if I hadn't progressed at all and was still sitting at 1.5 cm I would be super disappointed so I was hoping for at least some progress, if not in dilation then in effacement.  The nurse checked my blood pressure and informed me my Group B Strep test came back negative.  When our doctor walked in he immediately congratulated me on making it further than I had with Carter.  He checked me and said I was 2.5-3 cm dilated, almost a full 3 cm but not quite.  He also said I was 80% effaced.  I've read that effacement is what helps your body progress because once you are fully effaced you dilate faster, but who knows.  I was very excited with the progress.  I was 2-2.5 cm dilated and 80% effaced at my 35 week appointment with Carter and he was born a week later.  So we could possibly be meeting Elise within a week.  After checking me the doctor said he's on call this weekend just in case I decide to do anything crazy.  I asked if Elise is low because she doesn't feel that low to me.  I felt like Carter was super low toward the end and just don't feel that way with her.  He assured me she is quite low and is now in position.  She is facing my left butt cheek whereas last appointment, a week ago, she was still facing toward my right hip.  He said ideally I'd make it another week, but he's fine with her coming any time now.  As he left he said see you in a week or even earlier with a big smile on his face.

Baby's Size: Baby girl should be measuring in around 6 and 1/3 pounds and measure a bit over 19 inches.  She has developed her most crucial functions at this point.

Maternity Clothes: This week it got really warm.  We had a couple days even reach into the 70's!  Unfortunately I don't own any maternity jean shorts and feel there's no point in buying any now.  I mean, why buy shorts that I will most likely wear for 3 weeks or less.  So I've been sticking to dresses, athletic shorts, and tried regular shorts with a belly band which was just a pain.

Sleep: I took a nap one day and really struggled to fall asleep that night even though I only napped for 20 minutes so I decided not to take naps any other days.  All day long I feel really relaxed and calm and don't worry about when Elise will arrive.  Then I lay down in bed at night and I start thinking too much and wondering when she will be here and I get anxious.  I am so excited to meet her!  One night I had a dream my water broke that next morning.  Then another night I had a dream I went past my due date.

Symptoms: During the first part of the week I was disappointed because my contractions really eased up and I was having hardly any and they weren't strong.  It wasn't that I wanted to go into labor, I just enjoyed the contractions knowing they meant my body was preparing for the big day.  Then Thursday night I started losing my mucus plug which made me feel better because even though it doesn't mean labor is imminent, it does mean my body is preparing for it!  It's crazy how different things have been this time around though.  Even my mucus plug has been different.  With Carter I lost it over the course of 2 days and it was huge chunks tinged with blood.  This time I'm still losing it in smaller chunks and so far none of it has been tinged with blood.  I'm having a lot more pressure down low along with some soreness in my hips.  My lower back is also really sore.  My belly is so tight and hard pretty much all day long!  I've also started having more swelling.  On Sunday morning my fingers were so swollen I couldn't get my rings past my knuckle when I woke up.  About an hour later I put them on and they were just a little bit tight.  I haven't had trouble getting them on since, but they are definitely tighter than usual.  One day I had a hair tie around my wrist and when I took it off there was an indention from where it had been.  Honestly I'm still in awe of how good I feel.  I have energy, I'm not terribly sore, even when I don't get much sleep my patience is decent.  I'm not in a hurry to get Elise out other than that I can't wait to meet her!  I think that's what has me convinced she won't be here too soon, I just feel too darn good!

Running: This week is exciting because I've reached full term and that means I can start running again!  I was so excited I figured what difference does one day make and started back yesterday with a 2 mile run.  It was glorious.  I felt so good.  The last half mile I was sore and could feel it low in my pelvis, but my legs felt great and it sure brightened my mood.  Walking has been nice, but it just isn't the same.  I got in 15 miles of walking this week.

Food Cravings: I've been having a hard time eating breakfast for a few weeks.  I'm really hungry but after I eat I feel nauseous.  So I've started eating just half a banana in a smaller bowl of Cheerio's rather than my regular full banana in a big bowl of Cheerio's.  Then around 10:00 am I get so hungry my hands are shaking.  It's craziness.  This week I did a terrible job with sweets.  I just stopped caring and went a little bit nuts.  One day I really wanted brownies with cream cheese frosting and needed to go to the store anyway so I picked up a brownie mix and frosting.  After I made them I preceded to eat almost half the pan of brownies during Carter's nap time.  It was ridiculous.

Food Aversions: Still get grossed out even just thinking of smoked meat.

Movement: Some days I just feel little kicks and other days I feel more movement.  On Sunday I felt her almost rolling around.  It made me wonder if she was stretching out.  Last week at our appointment her feet were up by her head so I'm hoping she's remedied that situation so she'll be in the proper position for her arrival.  It turns out that was likely the case as she is now in position!

Best Moment of the Week:  Finding out at our doctor's office I've made some progress.  Now I'm getting so excited thinking about Elise being born soon!  I'm hoping we'll get to meet her sometime next week if not a bit earlier!

Currently Loving: The beautiful weather we've been having.  Carter and I spend most of his waking moments outside and it's amazing!  I'm also loving being able to run again.  There's just something about running that is good for your soul.  I know I won't be able to run for a few weeks after Elise arrives so it's nice to be able to run these last few days of pregnancy!

Miss Anything: I'm so ready to meet our precious girl!  I'm hoping she holds out for a few more days at least, but I am so excited to meet her that I'm ready any day now.

What Big Brother is Up to This Week: I've been pulling out my ball to sit on in the evening when my back is really sore.  One day I pulled it out and Carter said, "Back sore, mommy?"  It's so cute that he remembers things I tell him.  He's excited to meet his sissy and has been talking about her a lot more.  He wants to give her night night kisses when he goes to bed.  He also enjoys screaming at my belly or pushing on it to "Wake Issy up!"  When we sit on the floor to read books Carter doesn't quite have room in my lap and slides off so he ends up continually getting up and plopping back down in my lap which is hilarious.  When we sit in our reading chair he pretty much always just sits beside me rather than attempting to sit in my lap.  This past weekend he ran a fun run at the St. Patrick's Day race.  My parents came for the race and brought Carter a tractor that he can drive.  He absolutely loved it and spent much of the weekend driving it around the backyard.  Last night Carter told me Issy Eese was going to nap in his bed with him, Big Al, and Buddy.  I thought it was very sweet but explained that she wouldn't be able to sleep with him and he wouldn't want her to because she'd cry and wake him up.  Today Carter was telling my parents "Issy Eese mommy's tummy" so I told him she won't be in my tummy for much longer.  He looked at me and said, "Carter hold Issy Eese."  It was so sweet! 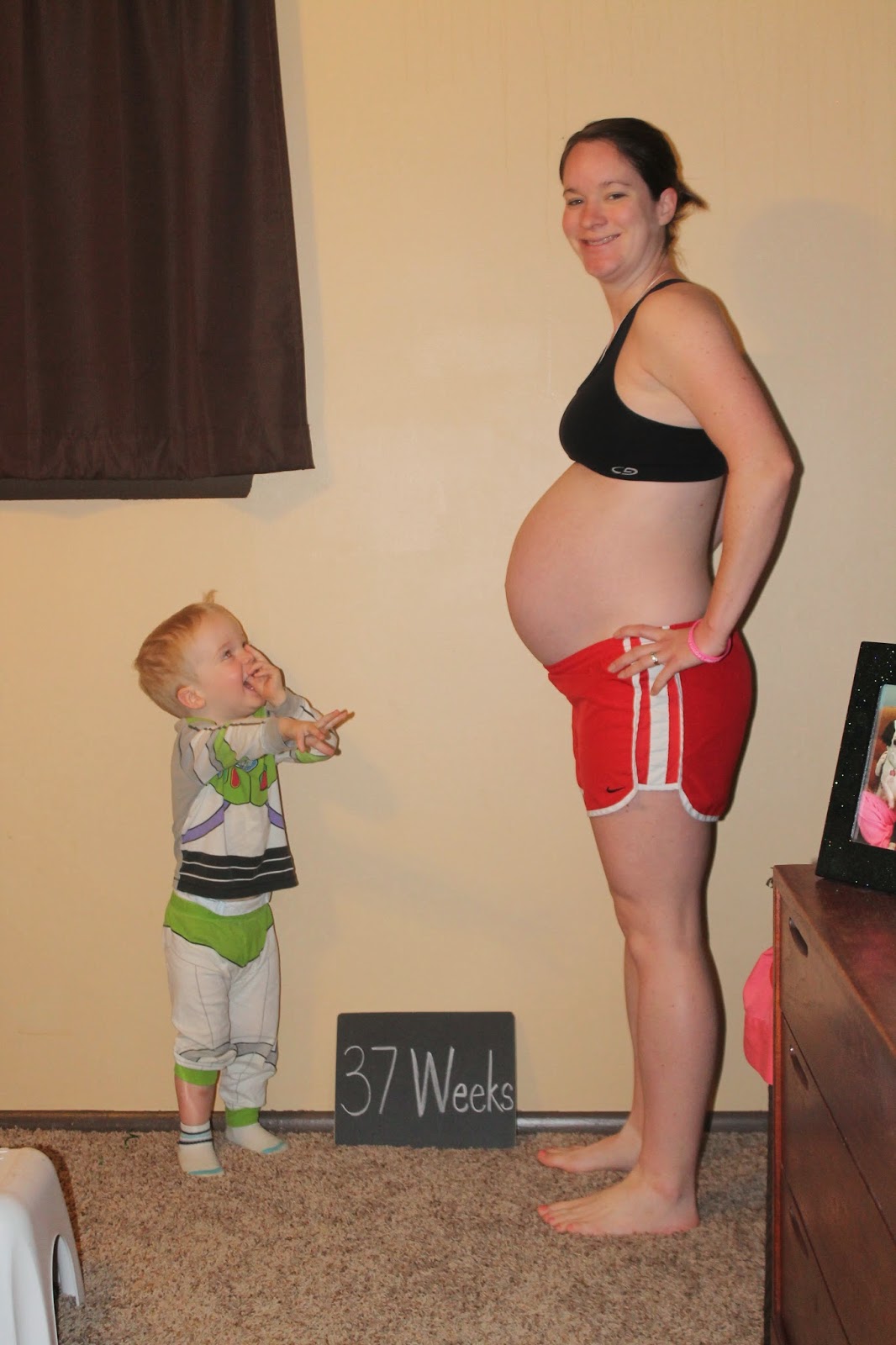 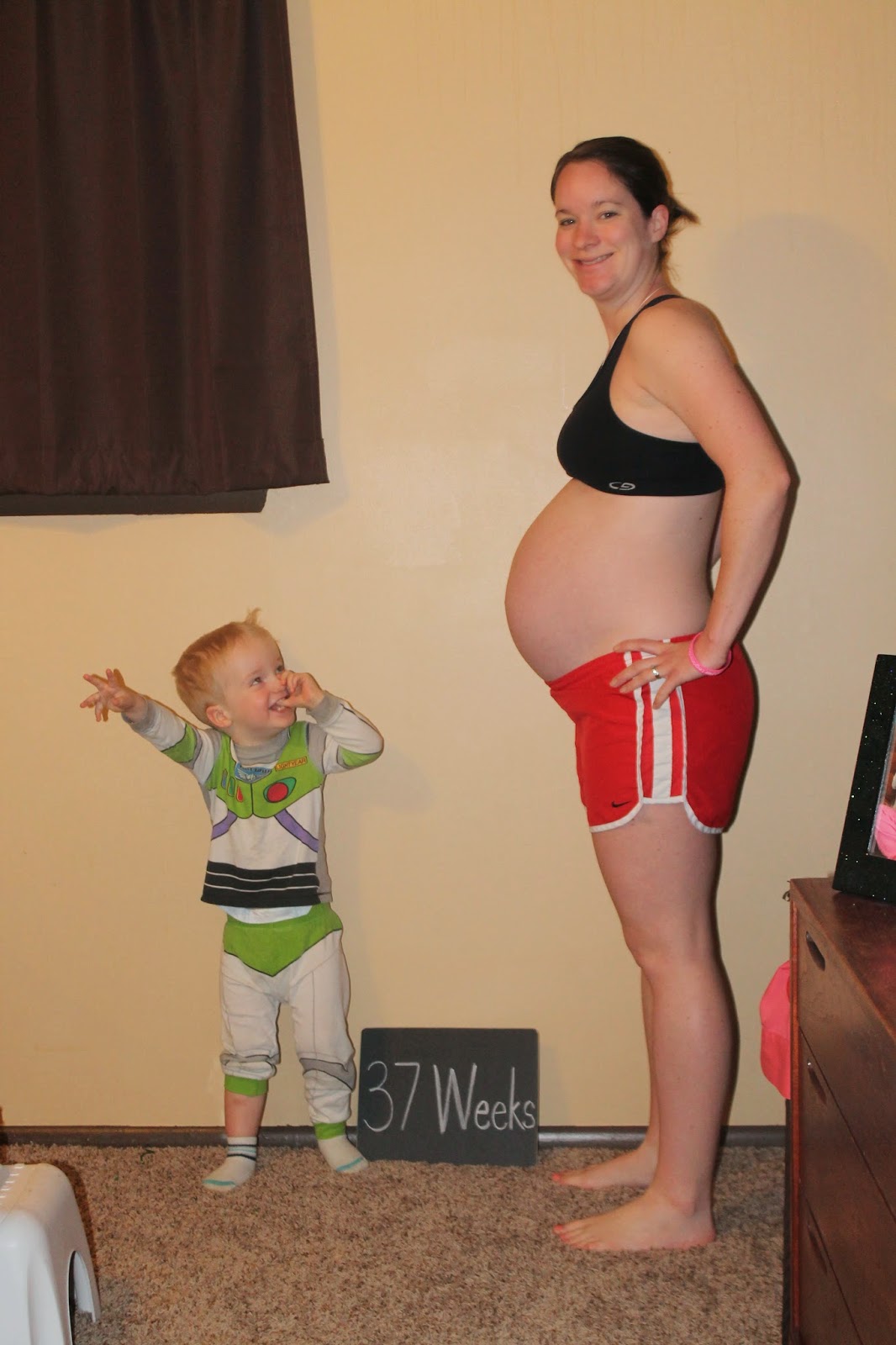 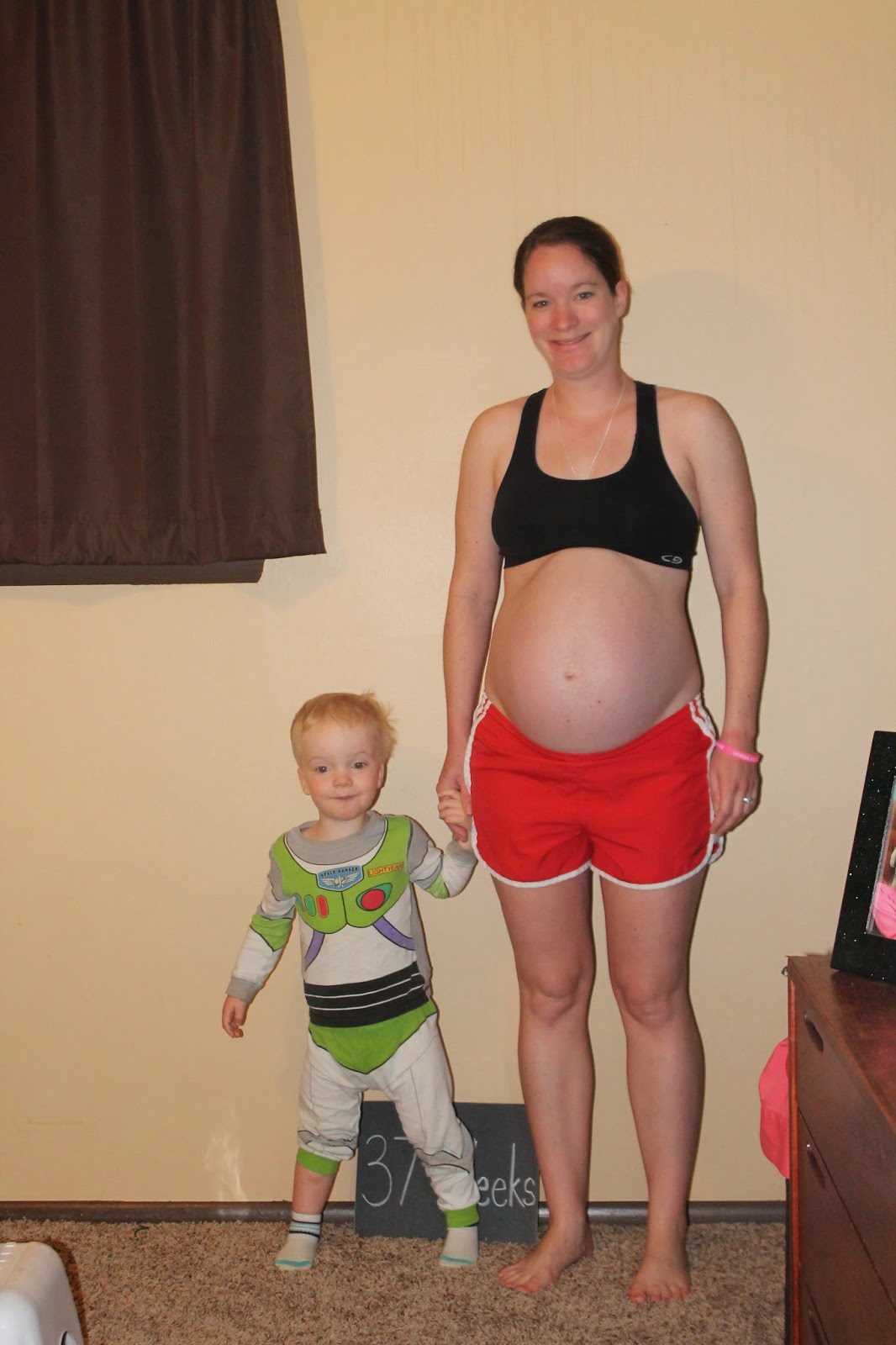 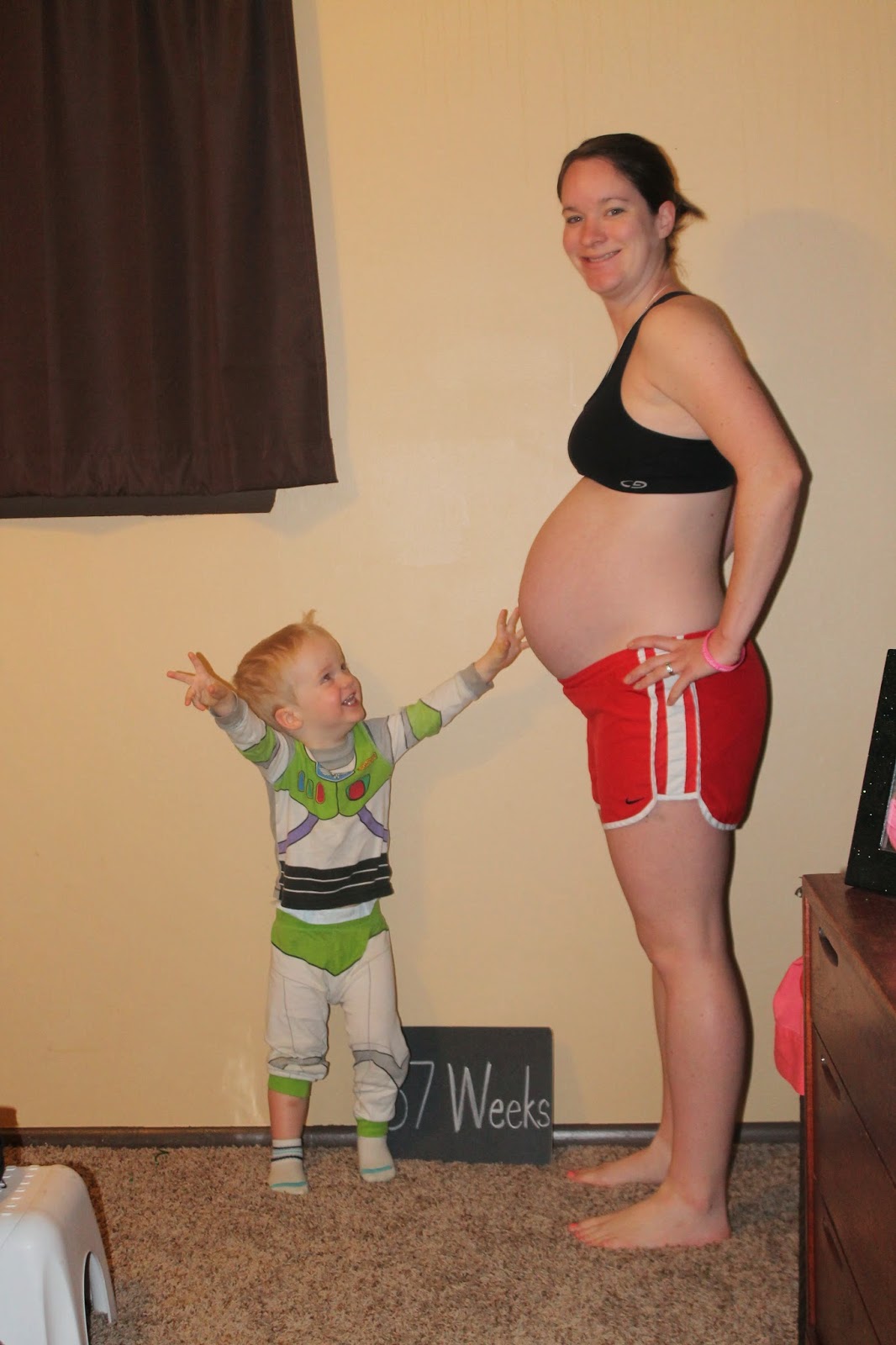 Guesses: Now that I've made it past 36 weeks I have a little bit of an understanding about how people feel when they are close to or past their due dates.  Since I've made it further than I did with Carter people have been asking me when Elise is going to be born and checking to see if there's been any progress. Never got to that point with Carter!

This Week's Guesses:
March 17th- My Grandma LeAnn
Ty's Aunt Brenda
March 19th- My best friend, Ang
March 20th- Me (like I said, this weekend would be perfect timing!)
Ty's brother, Paul (which also happens to be his birthday)
March 23rd- Carter
Posted by Liz Runningmomma at 12:12 PM