Time is going by so fast!  One of my pregnancy apps popped up today to tell me I have 77 days left in this pregnancy.  We are down to double digit numbers of days left, how crazy is that!?!!  I totally forgot about taking our bumpdate pictures until I was putting Carter in his jammies for bedtime.  I was tired and tempted to skip it, but we powered through!  Only pregnant is changing clothes such an ordeal! 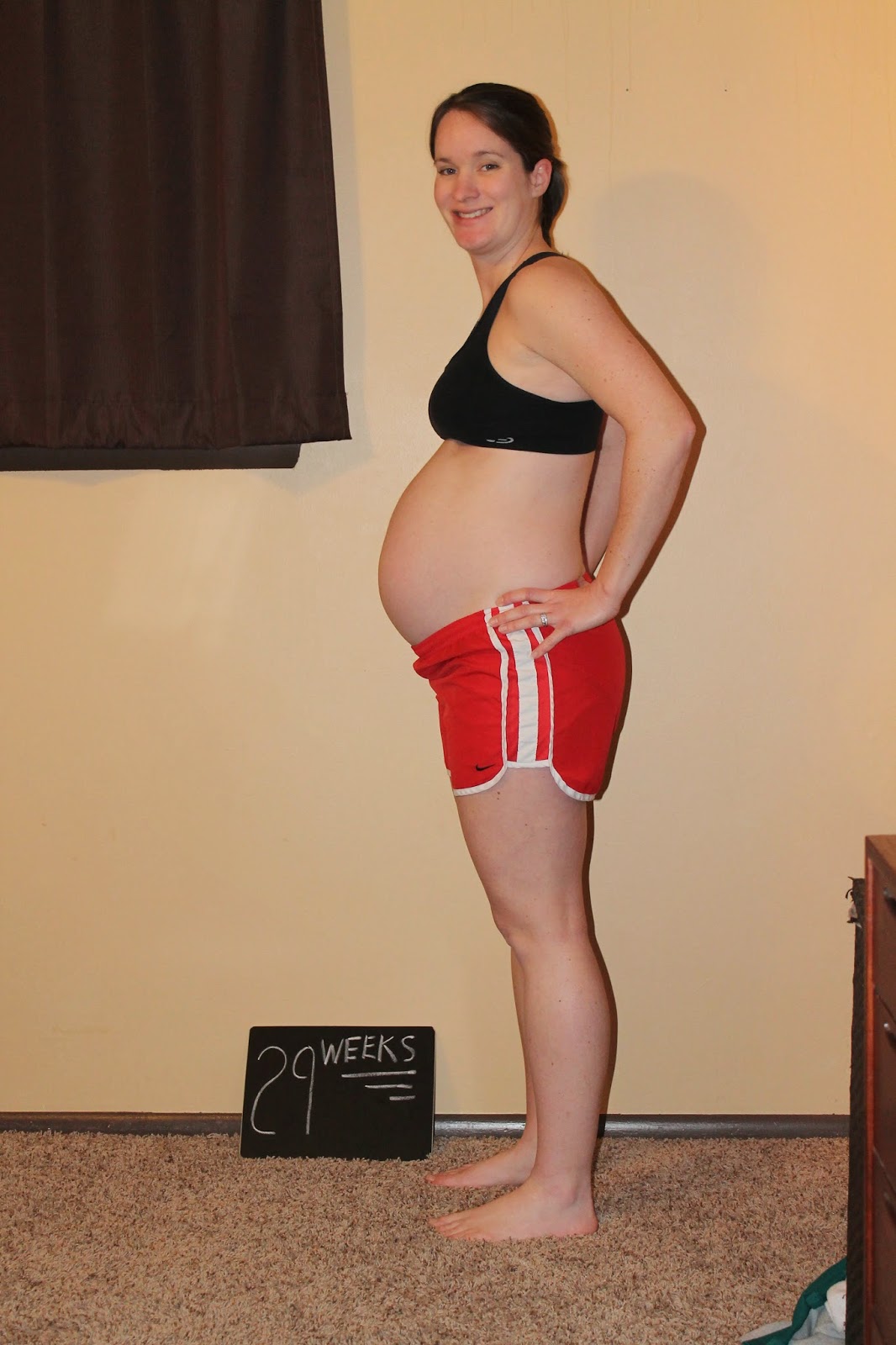 Baby's Size: Baby should be around 15 inches long and 2.5 pounds!  She sure is getting big and stretching out.  I feel her a decent amount above my belly button!

Weight Gain: I'm taking the week off from the scales this week and it feels great not to have the amount I've gained looming in the back of my mind.  My appetite slowed down a bit this week so I'm hoping my weight gain did as well.  If I could even just go to gaining a pound a week rather than 2 per week I'd be happy!

Maternity Clothes: I didn't wear any of my non-maternity tops I had been wearing this week because I had all my new maternity tops we got last weekend to try out.  I'm interested to see if they even fit anymore.

Sleep: Sleep was actually really good this week.  Carter slept until 7 a couple of days which really helped.  I also didn't wake up to go to the bathroom as much.  Most nights I only woke once or twice.  Strangely enough I've been waking up on my back quite a bit this week.  Typically I only sleep on my sides, but almost every day this week I woke up on my back.  That used to be a sure fire way to get Elise to kick, but she doesn't always kick when I'm on my back anymore.  I didn't nap during the week at all, but fell asleep on the car ride home from visiting Ty's parents on Sunday and slept for an hour!

Symptoms: I was really emotional this week.  I pretty much constantly felt like I was going to cry, but for no reason.  The second half of the week I started getting really tired again.  I'm interested to see if that sticks around or not.  If it does, I'll probably go back to taking a little 20-30 minute power nap during Carter's naptime.  My skin has been itchy again this week, must be stretching more, but luckily I still don't have any stretch marks.  My boobs have been especially itchy which is annoying because it looks ridiculous for me to scratch them.  I feel like I can get away with scratching my belly.  The acid reflux type stuff I had going on last week must've just been how Baby Girl was positioned because I didn't have any trouble this week.  I was able to eat full meals at dinner time with no problem.

Running: My weekly mileage was 10 miles.  I only ran 2 miles each time I went out to run.  Running was much more uncomfortable this week than it had been so far.  Part of it was recovering from the Runway Run 5k.  The farther along I am in pregnancy the longer it takes to recover from races.  My first day back running after the race I felt like I was running crooked which tells me my form is off and my hips are out of alignment, but that was back to normal the next day.  All week long I was feeling a bit off and sluggish which was why I stuck with 2 mile runs.  My belly is feeling heavier while running as well.  I still recover from my daily runs really well.  Carter and I went to an MLK parade on Monday.  While we were waiting in line for the porta potty the lady behind us recognized me from the Runway Run 5k.  She was so sweet and told me how impressed she was when she saw I was pregnant when I went up to get my award.  Then she asked how far along I was and she was amazed.  It was very sweet.

Food Cravings: I have been dying for sweet and sour chicken and crab rangoons from a restaurant in my hometown.  I mentioned to Ty that we probably won't be back home before Elise arrives with how our weekends in January are booked up and going on travel restriction in February.  My doctor said he may suggest I stop traveling earlier this time since Carter was premature.  My brothers were going home this weekend to visit while we were headed up to visit Ty's family.  Sweet Ty arranged with my mom and brothers to have them pick up sweet and sour chicken for me and bring it back in a cooler.  They dropped it off late Sunday night while we were in bed so I opened the fridge Monday morning to get Carter juice and about peed myself in excitement when I saw it!

Movement: I've felt some really huge and strange movements this week where Elise is sliding around.  I'm crossing my fingers it's because she's rotating to get head down.  I'm not banking on it though because I'm still feeling movements in the same places I had been for weeks, so I think she's in the same position she was at our ultrasound last week.  I know she has plenty of time to move, but I'd like her to do it sooner than later!  The longer she isn't head down, the longer I'll be worried about a c-section.  I keep reminding myself at least she's sideways and not Breech, I feel like she's more likely to move since she's sideways because she'll run out of room.  On Monday I experienced my favorite moment of the pregnancy so far.  Carter and I were laying together and Elise started poking out of the left side of my belly and then rolling over and poking out of the right side.  Carter looked at me and said, "mommy whoa!"  I told him he used to poke his booty out on the left side of my belly where she was poking out and he started laughing while saying booty.  We talked about how it was his sissy, Elise, going wild in my belly.  Each time she'd move he'd poke my belly and say "issy Eese".  The only way it could've been better would have been if Ty had gotten to see it.  I called for him and by the time he came in she had slowed down and I could feel her and see her, but he couldn't see her.  I told Carter to tell daddy who was being wild and he said, "issy Eese".  It was the sweetest!

Best Moment of the Week:Visiting Ty's family over the weekend and getting to see Garrett.  Garrett is Ty's cousin Megan's son and he's 9 months old.  I was so proud of how well Carter did with him!  He's definitely learning to be more gentle with smaller babies.  He really responded to me telling him he was only allowed to touch Garrett below his neck and only touched his head or face twice the whole visit.  I was pleased!  He also wanted to feed Garrett and give him a bottle.  Hearing him say Garrett's name was the absolute cutest!  He was always checking on Garrett and wanting to know where he was.  If he heard Garrett crying he'd say "Gardit okay?"  Anytime I asked him to help with Garrett he was quick to say yes.  We helped give Garrett a bath and Carter thought it was the funniest thing to watch.  Garrett stood up in the tub and Carter exclaimed "hiney!" while rubbing Garrett's bottom.  He just kept laughing while saying hiney and then told me "Mommy, booty, poopy."  I was cracking up.

Currently Loving: How close we are getting!  I can hardly believe we're a week away from 30 weeks.  I felt like once we hit 30 weeks with Carter time just flew by.  I guess having your baby 4 weeks early will do that.  It's crazy to be making plans and talking about things and realizing how close we will be to meeting Elise.  My mom was asking about running a St. Patrick's Day 5k and I realized I'd be 37 weeks pregnant at the time of the race.  We decided I'd do the fun run with Carter since they don't allow strollers in the 5k.  That way even if I'm not running anymore by then I can run/walk the fun run with Carter.  I think that will work out great because running the Jingle Bell 5k at 35 weeks pregnant with Carter was tough and I know my dad was nervous that I was running while dilated.  Oh, and I haven't heard anything back about my glucose screening which means I passed, unless they made a mistake and accidentally didn't call me.  Thank goodness because I was going to be so upset about eating that orange for a snack 15 minutes before drinking the sugar drink if I failed! 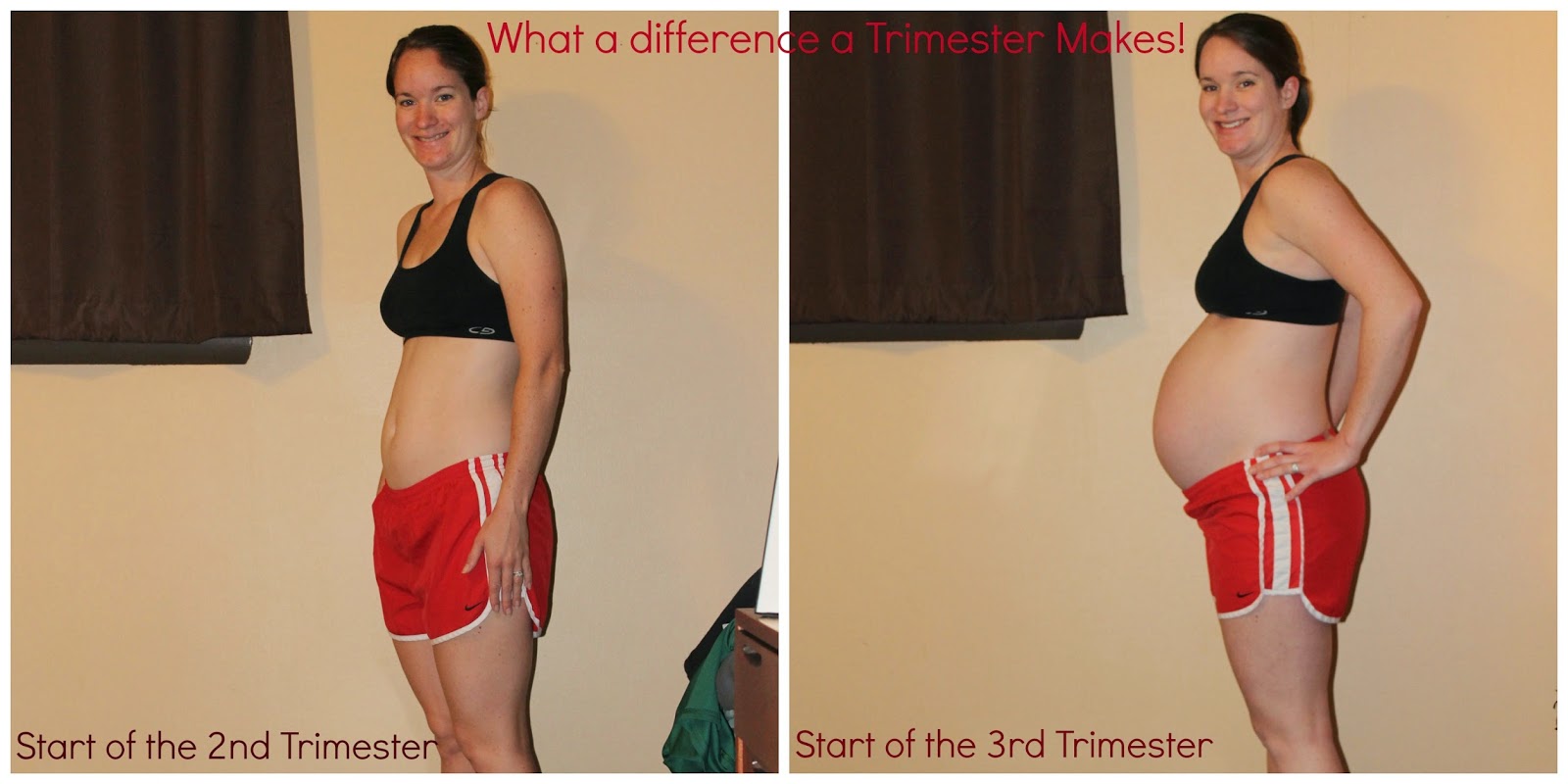 What Big Brother is Up to This Week: Carter is finally starting to talk more about his sister and where she is.  If you ask him where our baby is he points to my belly.  If you ask him where his baby is, though, he'll point to his own belly.  It all started one day when he was looking through the magazine I have from the doctor's office that shows the fetus at each month and tells about how it's developing (he loves to look at it and yell baby while pointing at the pictures).  After he pointed at the baby in the magazine and said baby, he pointed at my belly and said "Baby here!"  It was so sweet and made my day.  This weekend his Gigi was asking him about the baby and when she asked him what the baby's name is he said "sissy".  I realized I should probably start to refer to her as Elise to him more often.  Week 29 Bumpdate with Carter. 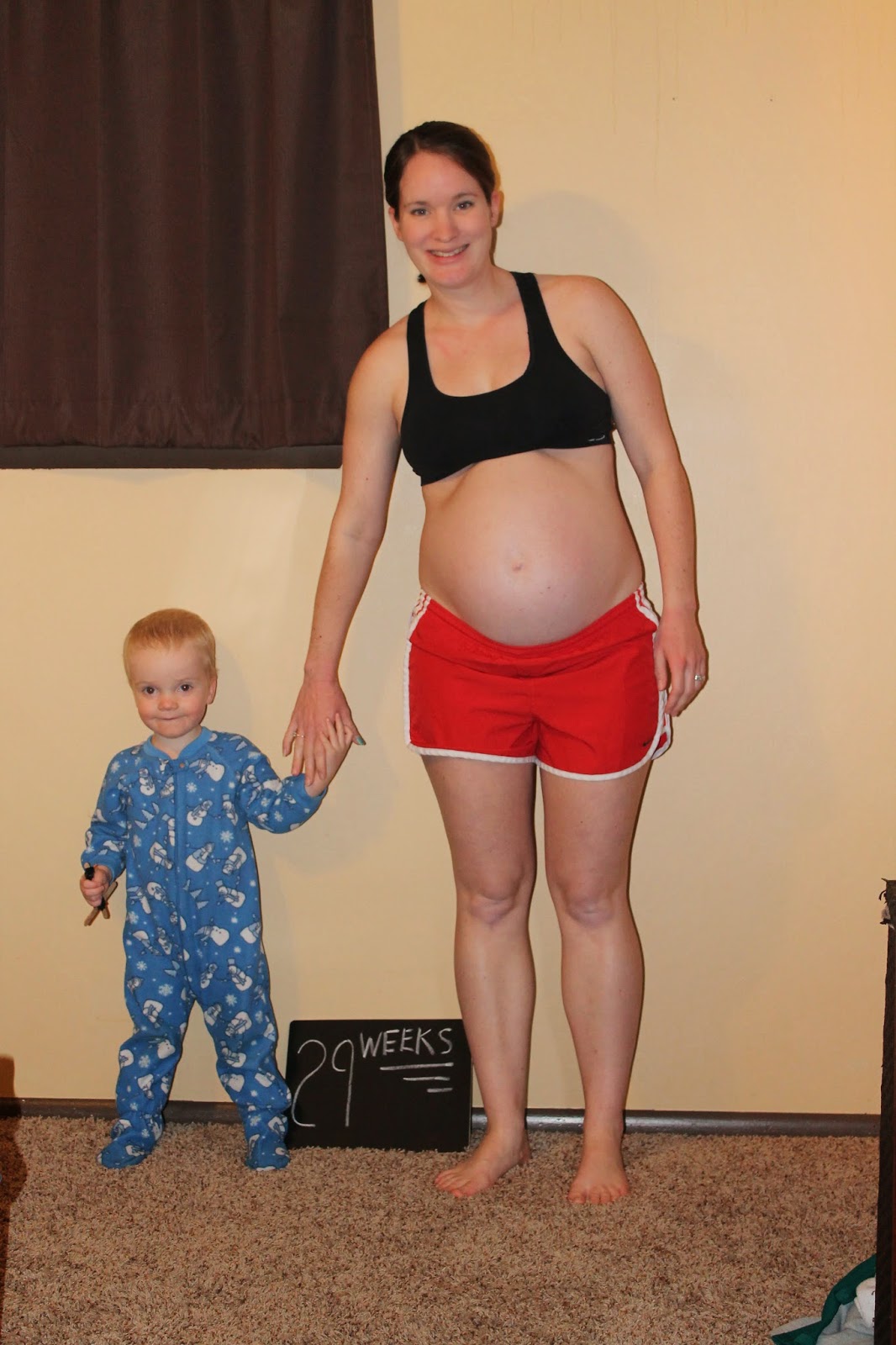 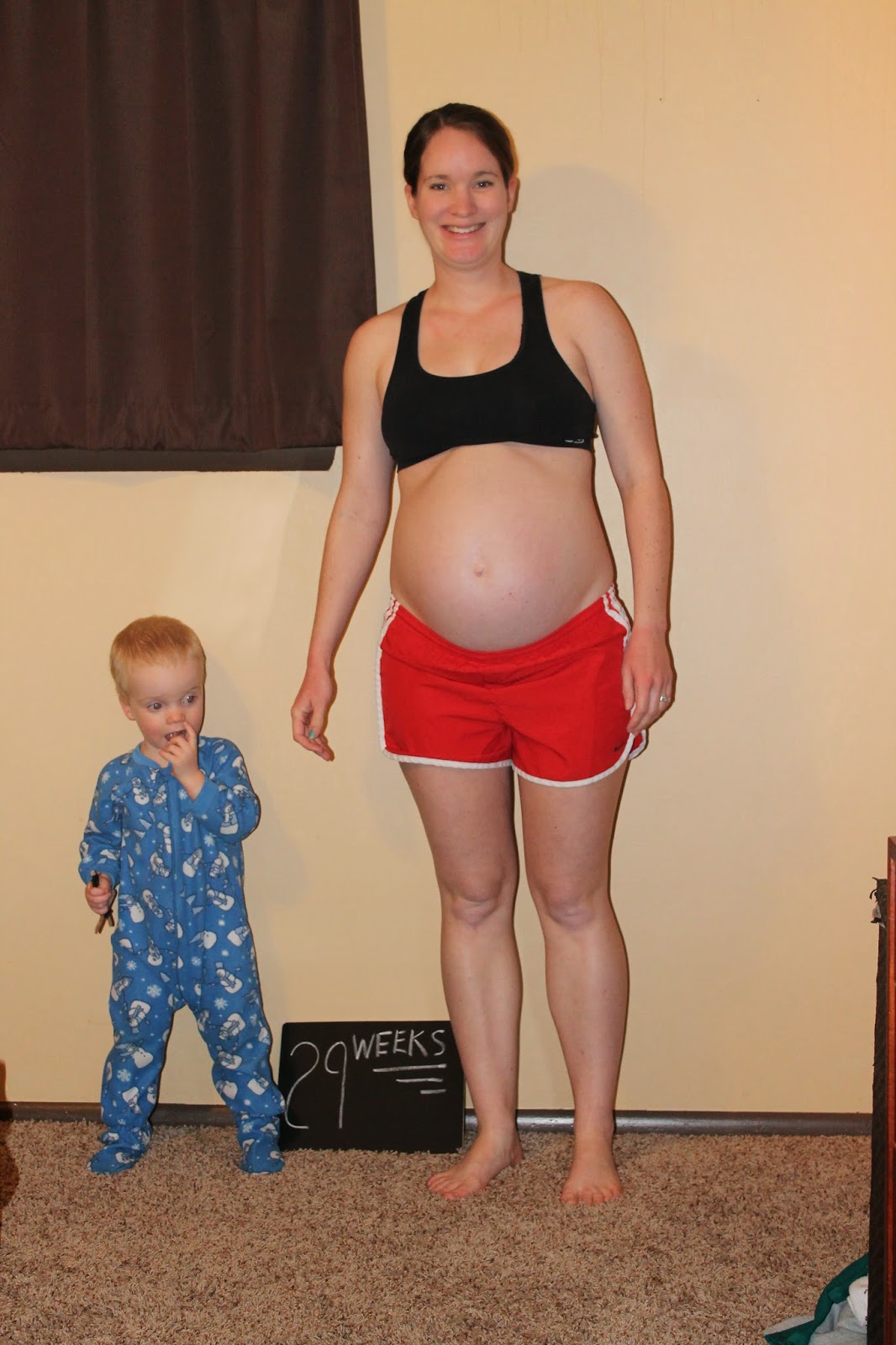 Posted by Liz Runningmomma at 6:33 PM