Random Thoughts About Motherhood and Toddlers

Why do kids tattle on themselves?  Do they want to get caught or do they just want attention?  One day I walked into the kitchen to find Carter had pushed a chair up to the counter, rifled through the basket of Halloween candy, and was eating a Reese's cup.  I told him that was naughty and took him down after cleaning chocolate from his face.  Then later I heard the sound of the chair scooting across the floor and Carter yelled, "Uh oh, mommy!" as I walked down the hall.  I swear he just yelled to me so I could find him digging through the Halloween candy again.  What a silly boy!

I am reminded quite frequently how everything we do and say as parents is modeling behavior for Carter. I have my not so shining moments when I refer to the way Carter is dancing as "booty popping" to his Uncie and then all night long he's saying "boody boppin" and pointing at my phone for music. But then there are the moments where I smile and am proud of the example we are for him. In the tub one night Carter was playing with 2 rubber ducks, one he deemed mommy and the other daddy. He had them talking sweetly to each other and then made them kiss. I was reminded how our relationship models for Carter how to be a loving partner in a relationship.

Some days Carter isn't feeling up to par and is really clingy.  Those seem to always be the days when Harper is right up in my business walking around under my feet and tripping me up.  Then Ty gets home and I just can't handle another being up in my personal space.  I have to tell him I need like 5 minutes without anyone clinging to me or up in my business.  That's been a shock to me because physical touch is my love language.  And before staying at home my day consisted of 25 kids touching and hugging me daily.  I never would have guessed Ty would ever get home and I'd have to ask him for some uninterrupted no one in my personal space time.  Maybe it has to do with being pregnant and overheated and quicker to frustration, I don't know, but it is so out of character for me!

Then there are the moments when I am frustrated and think I just need a time out when Carter comes through and changes everything.  On a day of extreme everyone in my space all day long Harper tripped me and I fell over.  I clenched up trying to fall just right to protect my belly and pulled a muscle in my abdomen.  It was sore and I was laying there for a moment because I was annoyed.  Carter came running to me, patted my back, and said "Okay, mommy?"  It was exactly what I would have done had the same thing happened to him.  My kid somehow always makes things better.  Lucky for Harper too because I wanted to put my foot in her rear!

What is it with poop that it seems to cling to things?  I have found it in random places.  One time I changed Carter's diaper in a public restroom and as I was walking out I noticed poop on my purse.  After changing a poopy diaper at home I noticed a tiny, round piece of poop on my upper arm.  I was putting Carter in his crib as I noticed it and of course he reached up to touch my hair at just the right moment to where the poop fell down the sleeve of his shirt.  It's like a tiny insect clinging to life in the fresh air.

When is it no longer acceptable to have a video monitor in your child's room?  I love, love, love our video monitor.  It is probably my favorite baby item we got because I'm still using it and plan to continue using it.  Thanks to it I was able to be reassured Carter was still alive when he first transferred to his crib as an infant and now I can see what he's doing in his toddler bed.  I love being able to check and see if he's sitting up, playing with toys, or out of bed.  It's especially fun to watch and see how he puts himself to sleep which usually involves swinging one of his lovies around in the air.  We bought a second camera so we can have one in Elise's room and keep one in Carter's room.  That got me to wondering, how much longer will we get to use it?  We've gotten some serious use out of it already!  I was joking with Ty that we can use it to see if Carter's sneaking out the window when he's in high school.  Obviously that's too long to have a camera in your child's room, but it's hard to imagine ever letting it go.  I'm sure it will be like all other transitions have been.  One day I'll just know that it's time or we'll be forced to make a change due to the needs of a sibling.  But wouldn't it be nice to always be able to check in on your babies, no matter what their age?

Someone sent me a picture of this pretend text between a toddler and a cat.  I laughed so hard I had tears streaming down my face.  It is so Skippy's life!  Carter used to search for Skippy while walking on his tiptoes.  The only problem was that he would yell, "KITTY!" at the top of his lungs which totally cancelled out the fact that he was tiptoeing.  He's finally figured it out and now whispers as he moves from room to room on his tiptoes looking for Skippy.  He'll walk into a room and say, "No, kitty!  Kitty go?"  It's hysterical! 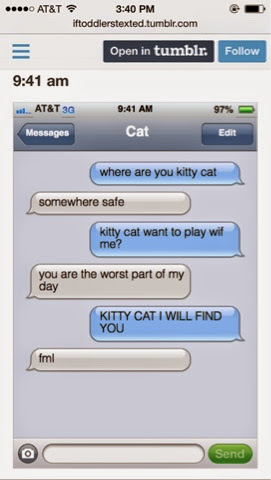 Does becoming a parent make everyone turn into a huge sap or is it just me?  One day I was watching Carter jump on his trampoline while laughing and smiling and having a blast.  I was so happy and fulfilled and was completely loving the moment I was in.  Then all the sudden I started thinking about how some day I'll be looking at Carter as an adult, remembering how much fun that exact moment we were having was, and wondering how time had gone by so quickly.  The thought of Carter not being this age anymore and living with us got me all choked up and I fought tears back into my eyes.  Maybe part of it is pregnancy hormones?!!?
Posted by Liz Runningmomma at 11:11 AM

Email ThisBlogThis!Share to TwitterShare to FacebookShare to Pinterest
Labels: random