Woo hoo, we've made it to the 3rd trimester!  It seems like it has gone by so fast, especially this last month.  I know these last 2.5 to 3 months before Elise's arrival will go by even faster!  That's why I've already started picking up things here and there for Carter and Elise's Easter baskets.  Easter is on April 5th this year, so there's a high likelihood that Elise will be here before Easter.

We had our 28 week appointment yesterday.  I had my glucose screening and will hear back if I failed it, otherwise they will discuss the results with me at my next appointment.  From now on we go twice a month or every other week.  As we were walking into our appointment Ty said it seemed early to be going, as in he felt like we'd just been, and wanted to make sure I had the right date.  I told him it's going to seem even earlier next time we go since we'll go twice a month.  Our doctor was out for a family member's surgery so we met with the physician's assistant.  We had one appointment with her when we were pregnant with Carter as well, that time due to an unscheduled c-section.  She said Elise is laying sideways with her head on the left side of my belly.  It's fun to know that because my left side is always the one bulging out and feeling tighter.  I also tend to feel most movement on the upper right side where her feet are.  The movement I'm feeling down lower is her legs because she's basically in a U shape.  I didn't realize what a sweet baby Carter was to already be head down, and stay that way, at 28 weeks!  I hope Elise kindly moves to the appropriate position just like her placenta did early on in our pregnancy!  Her positioning must be why I feel so much wider than I did with Carter.  Since he was up and down my belly pushed out more and didn't expand to the sides.  Her heart beat was 152 bpm which is good. 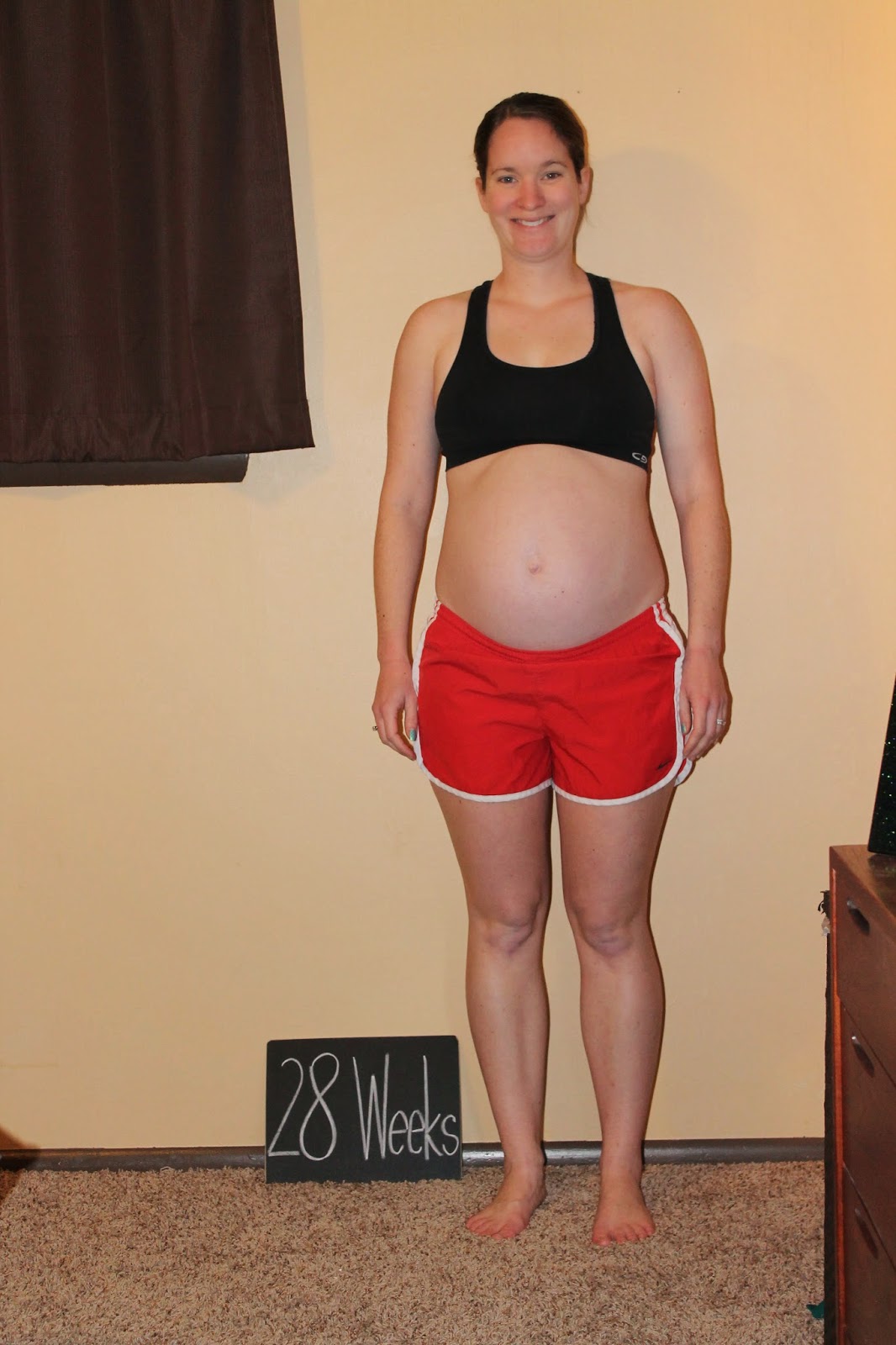 Baby's Size: Baby should be around 14.8 inches long and weigh about 2 and a quarter pounds. She was measured as weighing 2 pounds, 7 ounces at our appointment so she's right on track.  That put her in the 55th percentile.  She's adding more fat and unfortunately it seems I am as well!

Weight Gain: This morning I was up 21 poinds.  Yesterday morning I was up 23 pounds.  I like to weigh myself on Monday and on Tuesday in case I forget to weigh in on Tuesday.  I'm starting to stress out a little bit since I'm weighing in every week.  My weight fluctuates a lot from day to day and I'm trying to not let it bother me, but it is.  I tend to focus on the heavier weight and get upset so I've decided to stop weighing in weekly.  I haven't decided if I'll weigh in every other week or once a month from here on out.  Hopefully I'll stick with that and not let the scale scare me!  I'm doing everything the same as I did with Carter, minus the long runs to prepare for the half-marathon, and am gaining more weight.  I think it's best to just not know at this point.  My goal was to stay in the 25-30 pound weight gain range, preferably 25 pounds like with Carter. It's looking like it will be closer to 30-35 pounds and I need to just let go and do what my body needs.  I was getting to the point where I didn't want to eat when I was hungry for fear of gaining too much weight and that's no good!

Maternity Clothes: My parents were in town and Saturday my mom went shopping with Ty and my brothers while my dad and I stayed home with Carter.  They came back from Burlington Coat Factory with some long-sleeved tops and a pair of sweat pants for me.  I went back the next day and picked out 3 more long-sleeved shirts ranging from $6-$13!  Now I have plenty of warm long-sleeved shirts to wear during this cold winter we are having!

Sleep: This week Carter was waking up much earlier than usual, around 5:30-6am rather than 7am.  Then rather than his typical 2 hour nap he was napping for 3 hours.  I'd so much rather sleep an extra hour in the morning and have him take a shorter nap!  Especially because I didn't take naps this week.  I just didn't feel like it and had things I wanted to get done.  I did take a 20 minute nap on Saturday after our 5k race because I was really tired.  I've been waking up in the mornings feeling exhausted and struggling to get out of bed.  My body feels so worn out.  I know part of it is waking up earlier and part of it is being bigger.  I had a dream Sunday night that I went in for my 28 week appointment and for some reason the doctor who delivered Carter and is not my regular doctor was the one we saw.  He decided to do a cervical check and asked me if I'd seen my baby's face.  I confusedly told him no so he pulled out a mirror and showed me that our baby's face was visible down there and labor was imminent.  Somehow I made it 4 more weeks with the baby down that low and delivered at 32 weeks in a swimming pool while I was swimming.  I pulled the baby out of the water, lifted it up and saw a penis.  I told Ty the baby was really a boy.  Then I called my parents (who for some odd reason weren't there) and cryptically told them "He has arrived!"  In my dream I was thinking, I knew it was a boy all along!  But I actually thought she was a girl before we even found out.  It was so weird!

Symptoms: This week I really started to feel pregnant and notice my belly!  It is getting so difficult to bend over and when I stand back up I am panting for breath!  I can eat a normal amount at breakfast and lunch, but not dinner.  If I eat until I feel full at dinner about an hour later I start fighting it back down and spend the rest of the night struggling with feeling like I'll throw up at any moment.  If I stop eating when I still feel hungry that doesn't happen unless I bend over or recline my chair too much.  I remember hitting a point with Carter where I was constantly hungry because there just wasn't room for a full meal in my tummy so I'd eat little amounts of food throughout the day.  It's not quite to that point yet.

Running: My weekly mileage was 12 miles and included a 5k on Saturday.  My fastest 3rd trimester time when I was pregnant with Carter was 24:55 at 29 weeks.  I was hoping to run faster than that if I felt good and ended up beating it by a lot!  I finished in 23:54.  It was a small race so I also surprisingly finished top overall female (it was super windy which slowed times down dramatically).  I had a runner stop me as I was walking to the bathroom because she wanted to tell me she thought I was amazing.  It was very sweet and encouraging.  I got so used to coworkers giving me a hard time about running while pregnant with Carter, it was nice to hear a compliment.

Food Cravings: I can't think of anything specific.  I'm just hungry a lot.  I haven't been wanting sweets like I normally do which is good since I had my glucose test on Monday.

Movement: Little miss sure gets busy!  My parents both felt her this weekend and were impressed with the amount and intensity with which she was moving.  Carter moved a lot, but not nearly as frequently or hard.  My mom said she hopes Elise is as calm as Carter and the kicking doesn't indicate that she will be more wild than he is.  We will see!  She's also starting to slide across my belly which is fun to feel and watch.

Best Moment of the Week: We went shopping with my parents and brothers on Sunday.  While we were at Gordman's I had to go to the restroom.  When I came out my mom was standing waiting for me.  She excitedly told me she had something to show me and took off.  I followed her to an aisle with furniture and there on the shelf was a little pink glider with white elephants on it.  On the shelf above it there were gliders that looked exactly the same, but had dogs on them.  My mom had seen those and turned to Ty saying, "Those would be perfect for Elise's room if only they were elephants rather than dogs."  Then she looked down and saw the elephants.  Ty said she got so excited she took off running toward the bathrooms to show me.  After showing it to me and getting my approval she decided she had to buy it for Elise's room.  Ty said he wasn't sure it would fit in the car as we had 6 adults and Carter along with his stroller all packed into our Mazda SUV (time #5,984 that I wished we bought a van rather than an SUV).  My mom ended up riding home with the chair placed over her lap.  It was all very comical and sweet.  While we were in the store I saw a placard that read "The only thing better than having you as a mom is knowing my children have you as a grandma."  Boy, isn't that true!  I set the glider up in the nursery and it looks wonderful.  Carter even read a book in it Monday morning and then rocked Elmo in it while I rocked Jake in the big glider on the opposite wall.

Currently Loving: That we've made it to the 3rd trimester!!!!  I am so excited for Elise's arrival and hitting the 3rd trimester makes it seem so much more real.  She will be here in less than 3 months!!!  My level of excitement continues to increase as we creep closer to 30 weeks.  Each week from here on out is a week for her to get bigger and stronger and more ready for life outside the womb.  It's also a week closer to meeting her.  I love that now I'm looking forward to her arrival.  Before I was counting down to the end of the 1st trimester, the half-way point, or the end of the 2nd trimester.  Now our next milestone will be her birth!!!!

What Big Brother is Up to This Week: This week was a pretty ordinary week as far as our schedule goes.  Jake came on Monday and Tuesday.  Thursday we went to the aquarium with Uncie J.  My parents came for the weekend and we ran a race called The Runway Run.  Thomas and my mom walked with Carter in the stroller.  There were planes on the runway and Carter loved them although he'd woken up early and was tired and fussy for the second half of the race.  My belly button is still a half outie/half innie. Carter loves it.  Anytime I'm changing and it's exposed he runs over and pokes the top half that is sticking out.  Gotta love my little guy!  My Week 28 Bumpdate with Carter. 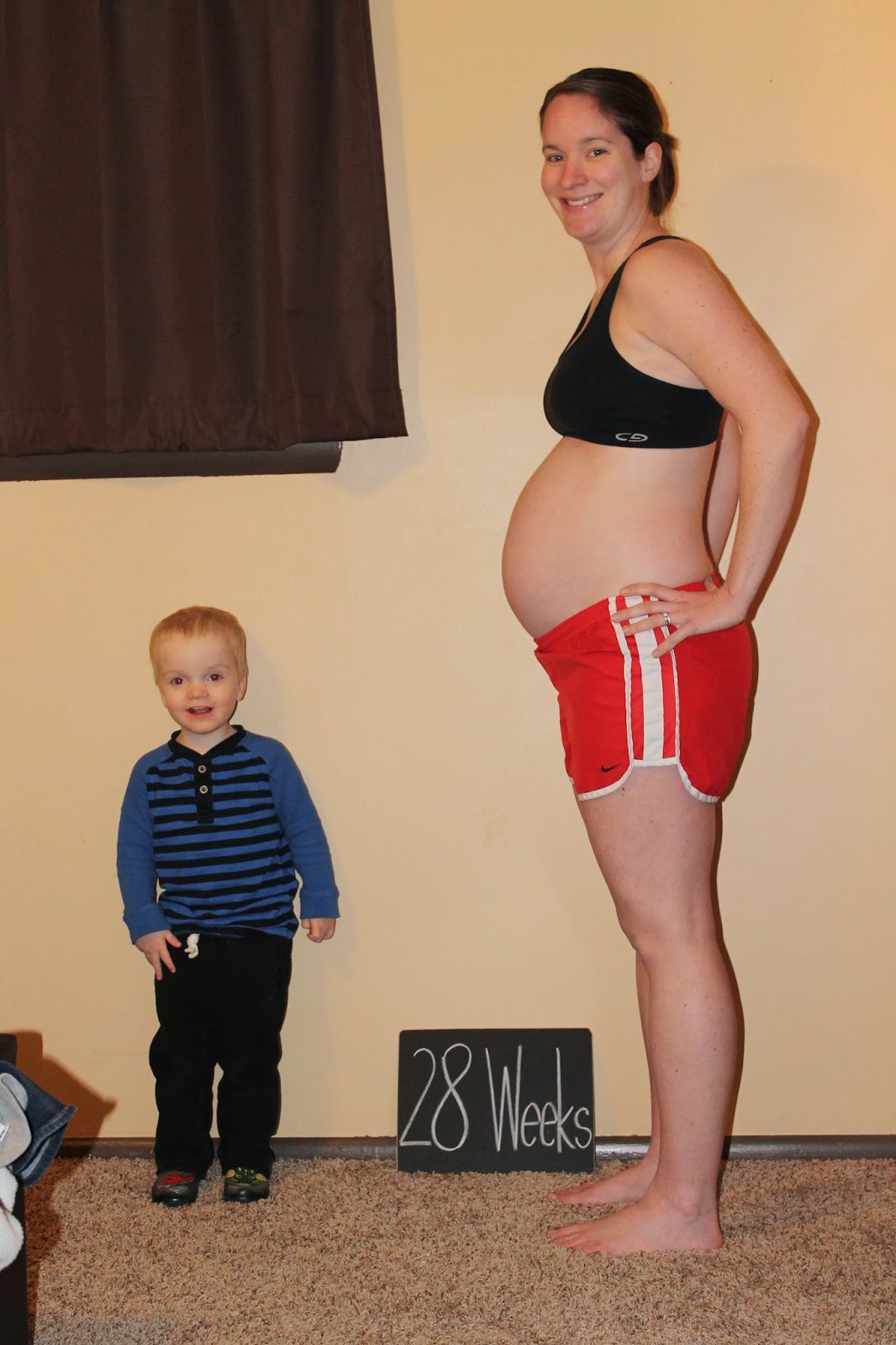 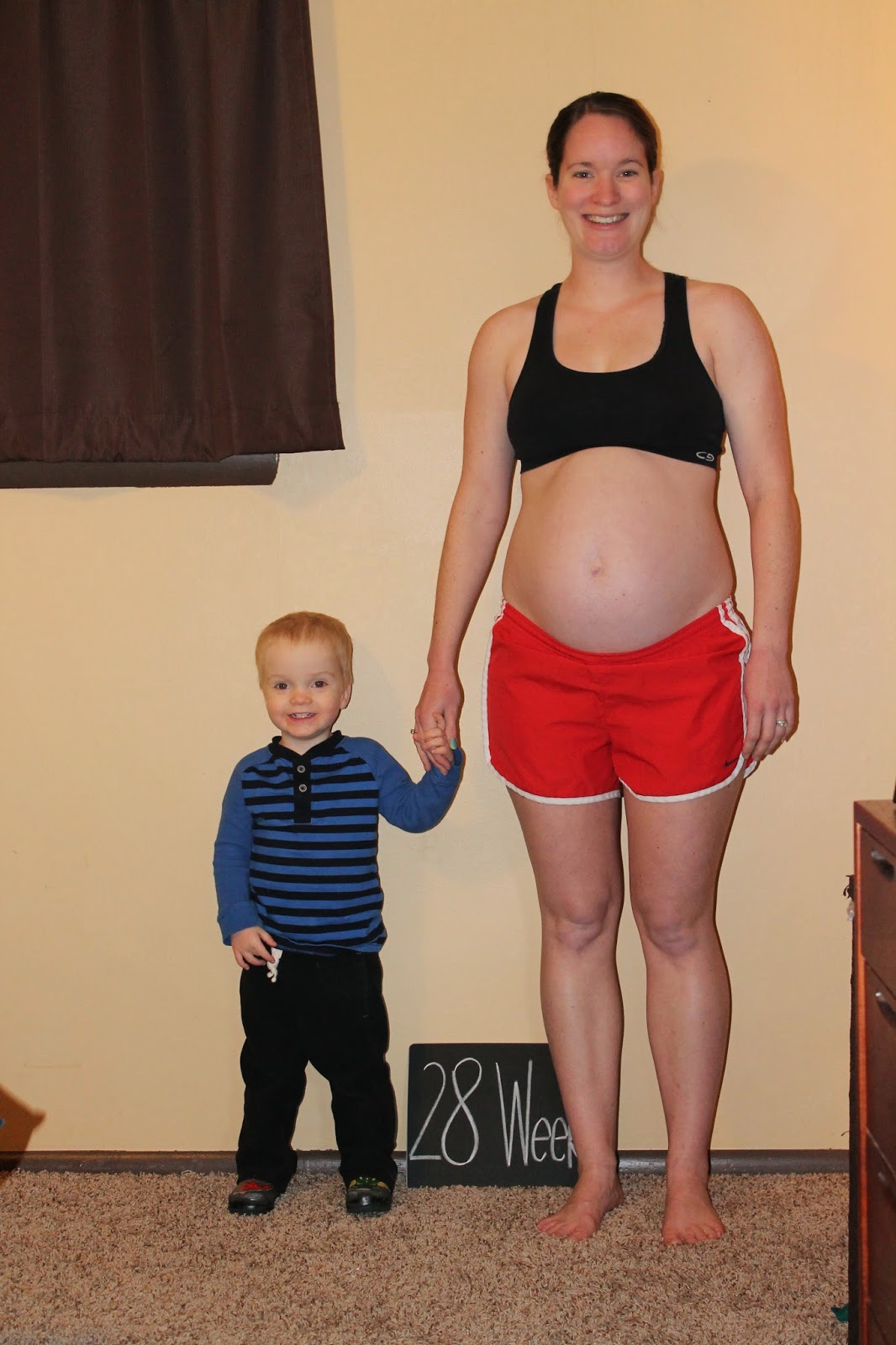 Posted by Liz Runningmomma at 4:52 PM