When Carter turned 2 and I was working on his 24 month letter Ty asked me how many more of them we were going to do.  At the time I wasn't sure.  I felt like I wanted to keep doing them because he changes so much each month but I figured I'd wait and see what I was feeling when we hit the first month past his birthday.  As January 14th approached I found myself ready to move on.  To get away from the long and detailed letters, but I wanted to still document new developments so I would remember for later.  I eventually decided I'd switch over to updates.  This way I can share fun tidbits and stories from the previous month, but have a shorter more concise post rather than a letter.  As he gets older I will adjust away from a month to a longer period of time as seems appropriate.  Now on to an update on Carter at 2 years, 1 month old! 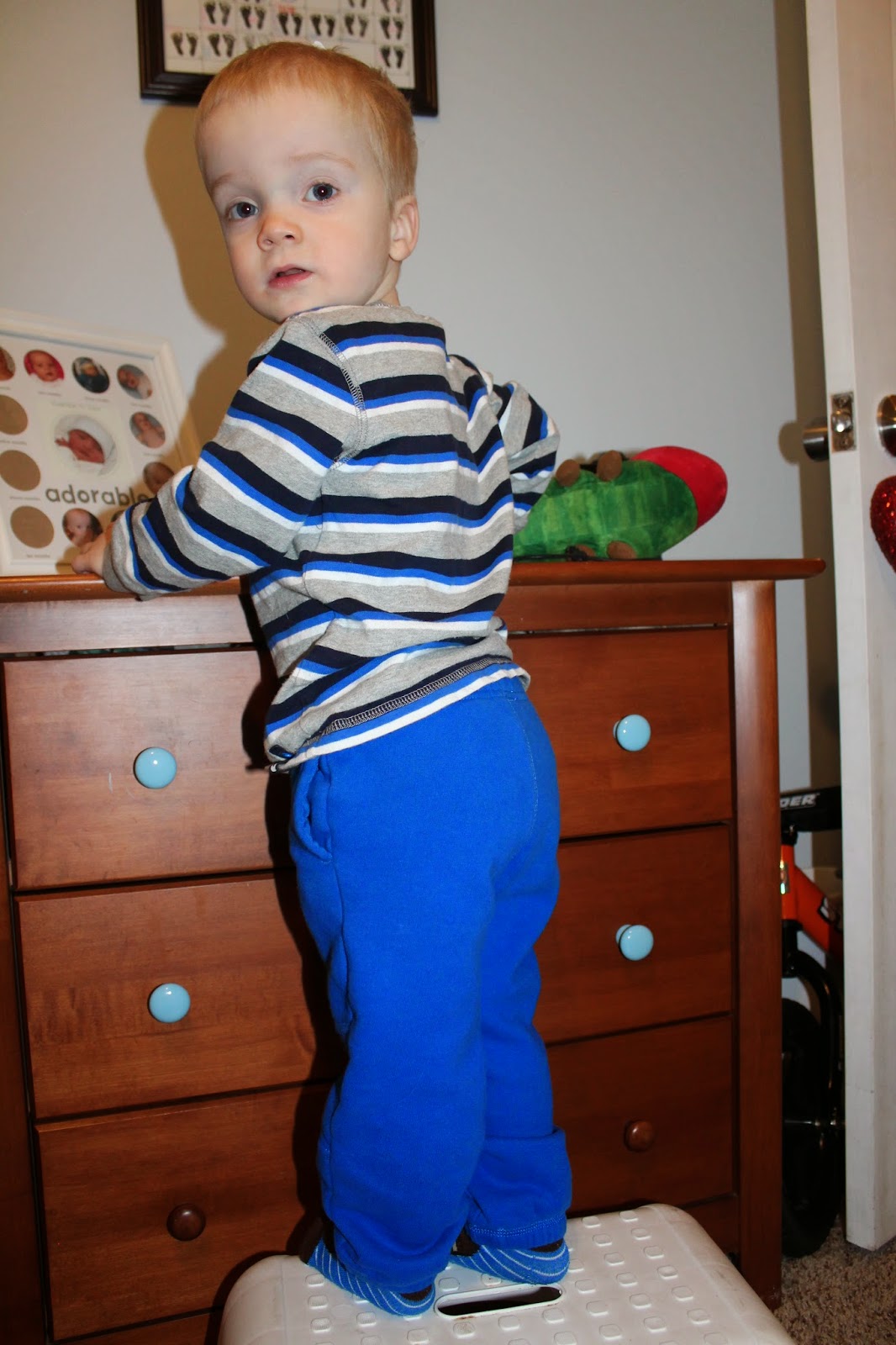 Carter randomly started calling Thomas, Uncie Taco.  He had been attempting Thomas and it sounded like Taco.  He eventually just gave up and switched over to calling him Uncie Taco all the time.  I loved it so much that I decided to teach him to call Jeremy, Uncie J.  That way they would both have names beyond Uncie and we'd know who he was referring to.  It's adorable to hear him say their names!  We got to see Uncie Paul and Auntie Amanda for Carter's birthday party and Christmas.  He says Paul "Paw" and Auntie Amanda "Auntie Meenie or Manny".  It's the cutest thing to hear him say her name!

One of his favorite things to play is "night night".  He will get himself a blanket and want covered up and he'll also carry his pillow around to lay on.  When he wants you to play with him he'll get you a blanket and pillow too.  Then he'll look at you and say "close eyes".  Sometimes he'll want Harper to play and will get upset that her eyes are open, telling me, "Mommy, Harper eyes!  Close eyes!"

This month he started singing quite a bit and it's adorable.  He likes to sing "Jingle Bells" and "Baby Beluga".  He also makes up his own songs.  It's hilarious to hear the words he uses.  One day in the car he was singing "Apples, strawberries, blueberries, oh yeah!  Oma, Opa, Uncies, Mommy, Daddy."  Then he'd start over with his fruit song.  A lot of times he just randomly strings words together in a singing voice.  One day he just sang "no" over and over.

He's also picked up the word scared.  He's never really verbalized being scared before, but he says it a lot now.  If there's a loud noise he'll cover his ears and say "Caca scared!"  He also doesn't like going into the dark by himself.  If he wants to go somewhere where it's dark, he'll come get my hand and have me walk with him. 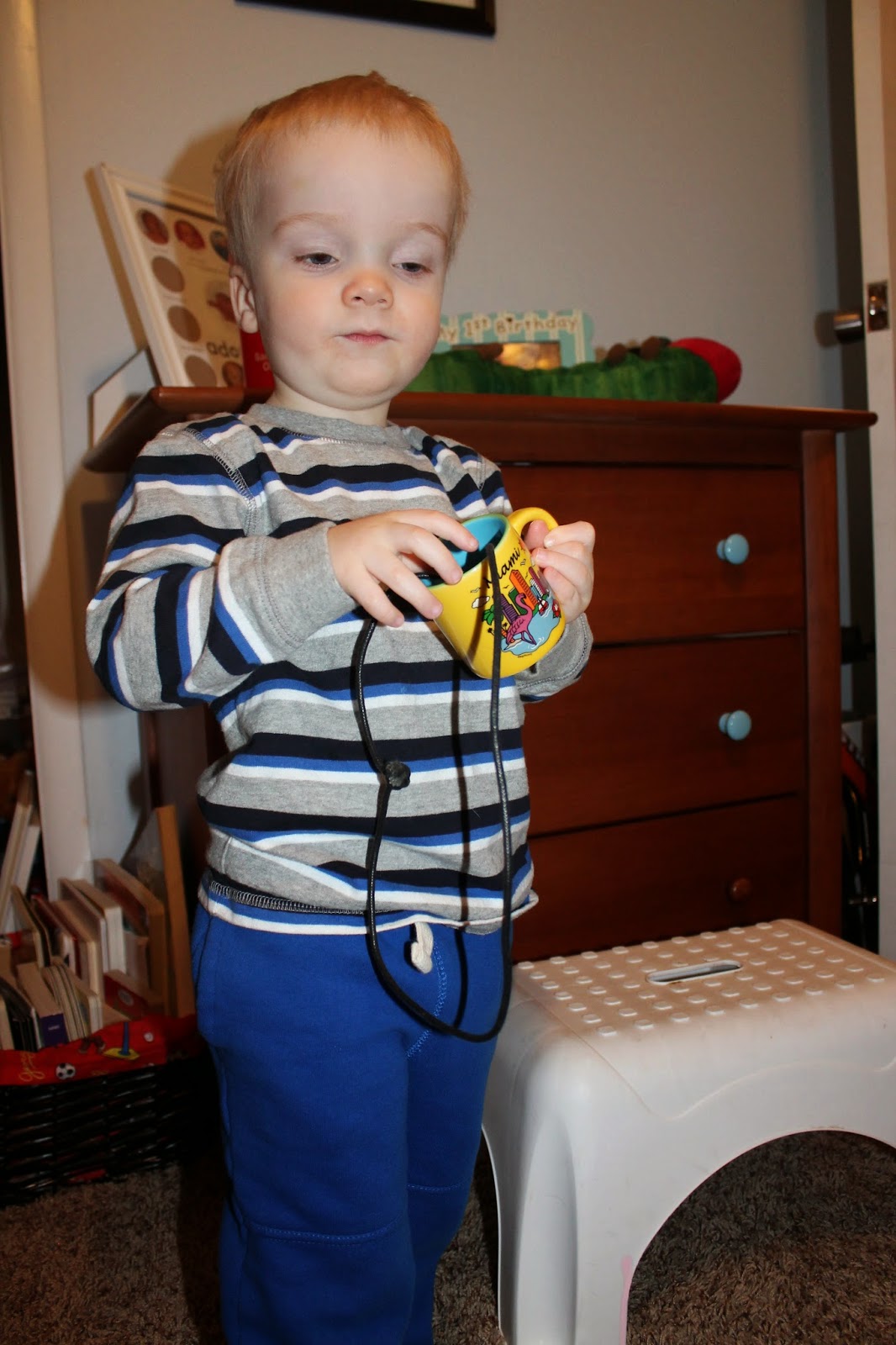 While we were at Ty's parents' house for Christmas Carter played with their laundry shoot quite a bit, helping his Gma throw dirty laundry down it to the laundry room.  I was in the basement with him and someone flushed the toilet.  He could hear the sound of the water going through the pipes and looked at me saying, "Caca scared!"  I picked him up and pointed at the pipes, explaining to him that water was going through them and that was what was making the noise.  He calmed down and then noticed the bottom of the laundry shoot where the laundry comes out.  He pointed at it and said, "Caca fro".  I told him, yes, it was where the clothes came out.  I was shocked!  I never would have figured that out on my own as a child!

We're still practicing with the potty chair and he's getting closer to being ready to potty train, but he's just not quite there.  One night he was in the bathtub and told me he had to poop.  I pulled him out of the bathtub and put him on his potty chair.  He started crying and ran to the nursery, pointing at the changing table, wanting me to put a diaper on him so he could poop.  I talked him into getting back on the potty chair and he sat there for a long time, never pooping.  Finally I put him back in the tub, washed him up, and got him ready for bed.  He never pooped and woke up the next morning just wet.  It was the strangest thing.  My mom said maybe he just needed to toot. 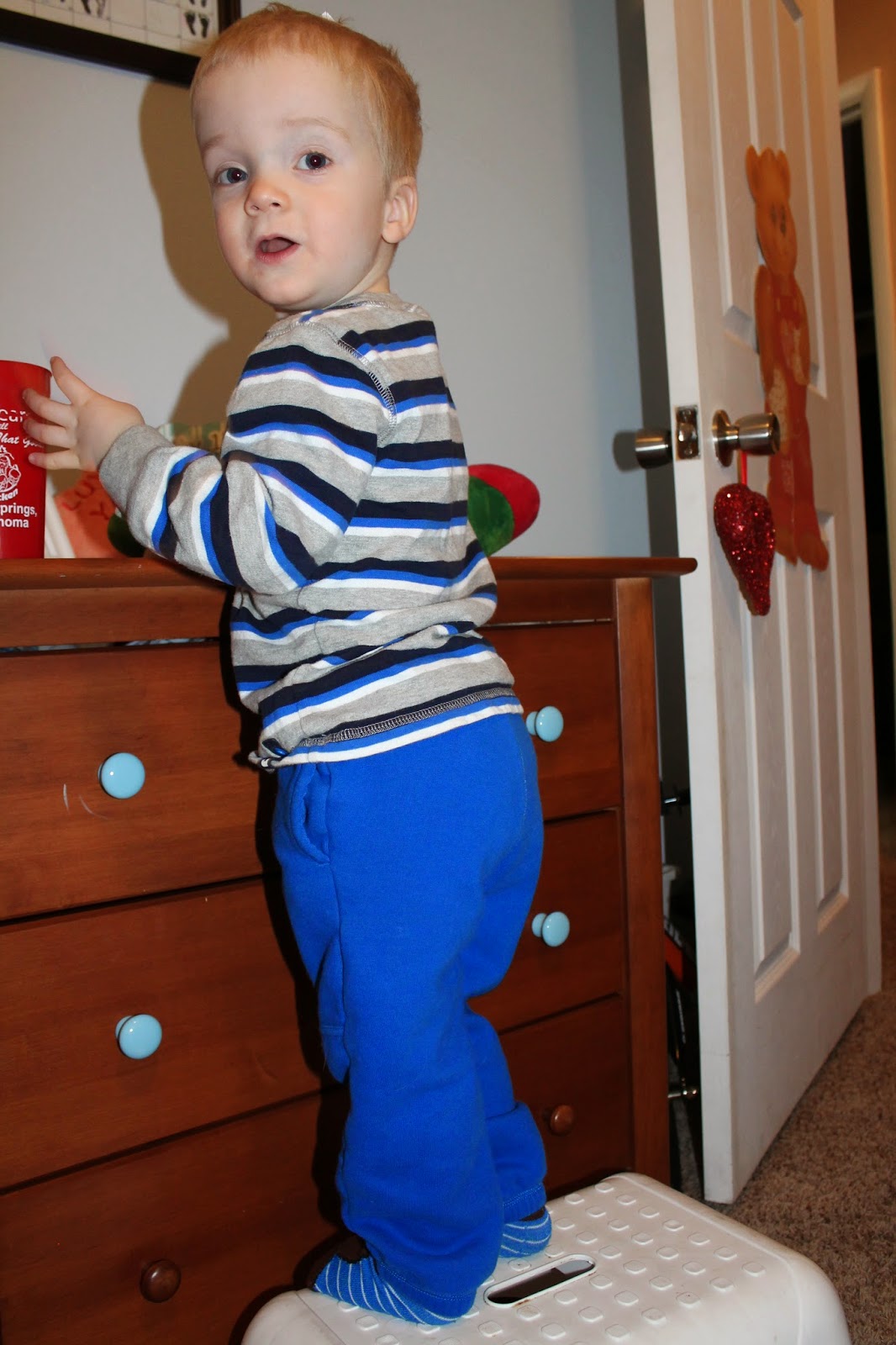 Carter loves his baby and is always taking care of her.  He likes to feed her bottles, cover her with a blanket and carry her around.  He tells me she needs a nap and puts her in his bed, getting her up moments later and telling me "baby wake".  He is so sweet with her, but not super gentle.  He'll pull her legs all around in crazy positions when dressing her and takes her on the trampoline to jump with him.

Posted by Liz Runningmomma at 9:43 AM