This was the 5th year for the Runway Run and the 4th time I would run the race. In the past I put a lot of pressure on myself to win the race because the top male and top female finishers win memberships to the Air and Space Museum. This year I didn't care about that at all because we only used our membership once last year and that was to get a discount on Carter's birthday party. Instead I was really focused on running a fast time. Our first race of the season was the Sweetheart Run and while that race gave me confidence that I'm in great fitness and have a huge PR 10k waiting to come out, it gave me no idea what I could run in a 5k since that was the first race and I just cruised during it. I ran some mile repeats with an average time of 6:28 a few weeks ago and then ran my mile repeat during my ladder workout the Tuesday before the race in 6:26. I felt pretty confident I could run around 6:25 pace to be under 20:00 and really felt like 6:20 pace was reasonable and a good goal to shoot for.
The morning of the race it was cold but not really cold compared to what we had been dealing with. It was the warmest weather we'd ever had for this race! It was 32 degrees and felt like 27 with the wind chill. The wind was stronger than I had hoped for and out on the runway you feel every bit of it. Of course it was blowing to where we would run half the race into the wind and half the race with the wind at our backs. They moved the race back from January to March in hopes of better weather and the race start was 10 am. I found that a later race start gave me more things to worry about. What to eat, when to eat, how much to eat and that made me start feeling nervous. I really wanted to run a fast time and hoped to be somewhere around 19:30 which would predict the half-marathon time I'm hoping for. The nice thing about how this training cycle has worked out is that Ty was doing Saturday morning long runs with his training group and would get home around 9:00. Then I'd get ready and go out for my run so I had done some tempo runs starting around 9:30-10:00 which gave me a better idea of what to eat before the race. I ended up eating 2 sunny side up eggs and a piece of toast for breakfast a little before 8:00. I started getting myself worked up that it would be hard to run a fast time between the wind and the lack of competition since there are usually a few guys around 19:00 and under but then a large gap back to around 20:00 at this race. I was able to calm myself by reminding myself that I would have Jeremy there. Knowing I'd have him to run with helped me mentally calm down and get ready for the race. I also told myself over and over, all you can do is go out there and run your best. That always helps me when I get nervous. This was definitely the most nervous I've been for a race in a very long time!

I ran a 2 mile warm up and holy cow was the wind cold! It took a while for my hands and feet to warm up so I was glad I went with a 2 mile warm up instead of a mile. Once I got warmed up I stayed warm, thankfully. Even waiting for the race to start my hands and feet didn't go numb. I stood with Jeremy and Thomas at the start and we took off. I followed the guys out in front, slowly curving toward the left as we took off. It wasn't until after we passed some cones that I realized we were likely supposed to go out and around the cones to turn left. I mentally knew the course was likely going to be a smidge short due to what they inadvertently cut off. I talked to dad after the race and he said even the people he was running with followed the guys in front so I just had to chalk it up to poor communication at the race start. The guys in front were asking about where to go at the start and were told to go left so that's what they did. They should have been told to go out and around the cones. I knew the first mile would go out fast since we'd have the wind at our back going down that runway for most of the mile. I was feeling good and didn't look at my watch too much. I did glance at it twice. Once it showed 6:15 and once it showed 6:20 pace. I was a little worried that if I hit 6:20 with the wind at my back I'd struggle to average 6:25 or under total since I'd definitely slow with the wind at my face. Pretty much right off the start there were 3 guys out in front and then a couple guys right in front of Jeremy and one person between him and me. We turned to the next runway and had the wind at our face for a little bit before the first mile mark. We went through the first mile in 6:13. I was pleased with that and knew I could run 6:27 into the wind and still be on the 6:20 pace I'd been hoping for. On the next runway I scanned the other side looking to see how close the 2nd female was behind me but didn't see another female for a long time. I wondered if I missed seeing the 2nd female go by but was more concerned with time than place so didn't worry about it.

As we started running with the wind in our face I was pleased that it didn't seem to be slowing us down as much as I had thought it would. When I glanced down at my watch a few times during that mile I was running 6:20 pace. At some point in the 2nd mile I came up beside Jeremy and we started running together. That really helped me keep pushing to maintain pace. We turned and had the wind at our backs for a short section before the 2nd mile split which I went through in 6:21. I was really happy to have held that pace mostly into the wind! We had a short section with the wind at our back before turning onto the next runway with the wind at our face to the finish. Somewhere around in here mom was coming down the other runway and saw us. We cheered for each other and Jeremy and I smiled as she slowed to take a picture of us running together. As we turned back into the wind Jeremy started to pull away from me. I tried to focus on holding as close to him as I could. In my mind I was fading but in actuality he just smoked the last mile. I felt like I had more in my legs but I was struggling to get them going any faster. I kept my eyes ahead and just stared forward at Jeremy. I knew we'd turn toward the museum and get to have the wind at our sides for the finishing section of the race. I told myself to just make it to the turn and then I could take off with the wind at my side. As we approached the turn I realized it looked like we didn't have far enough left to go to make a full 3.1 and I remembered that section we accidentally cut at the start. I decided to run through the finish line to a full 5k. 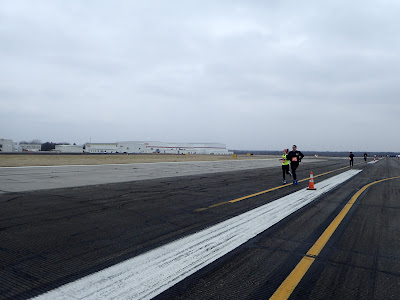 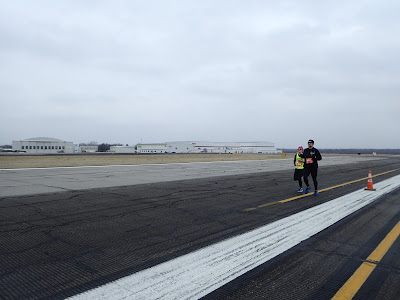 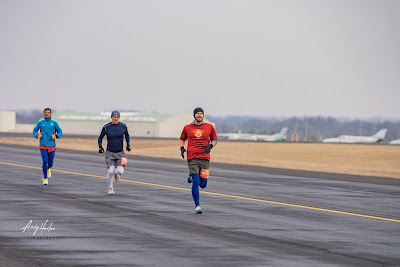 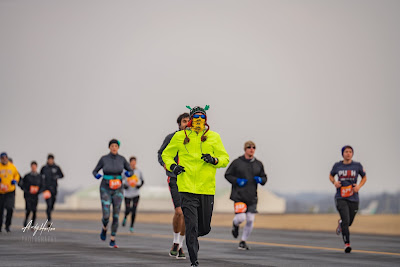 I heard my watch beep for 3 miles at some point but I didn't look at my split. It was 6:14! I could see the finish line clock was just over 19 minutes and I was excited! I finished in 19:17 and just kept running. I decelerated since there were spectators and other runners milling around the finishing area and stopped before I ran into the museum. Had we not accidentally cut the course I would have been able to sprint the finish faster, but oh well! Due to that my finishing sprint averaged 6:33 pace. I never run my finishing sprint slower than my average race pace so I know I could have picked up a few seconds there. I was still quite pleased with my race. I finished the full 5k at exactly 19:30 and averaged 6:16.5 pace. Jeremy stopped his watch as he crossed the finish line and his Garmin showed it was 3.07. And I know I ran a good race because I dry heaved a few times before I drank my water! My 5k time predicts a 1:29:34 half marathon which is super exciting but I also typically run faster in 5ks than what my longer race times predict so we'll see. I still have a month of training to go plus I'll taper before the Aquarium Run so I think it is possible I'll sneak under 1:30. We watched Thomas and dad finish and then jogged out to run to the finish with mom. I'm excited for the St. Patrick's Day 5k. I really think I can improve my time between not having to run past the finish line and hopefully less wind will cancel out the hills of the St. Patty's Day course. 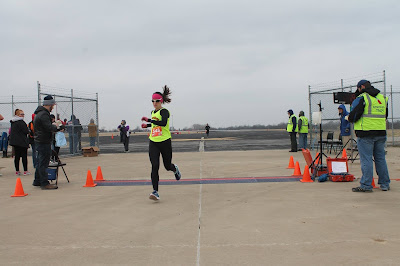 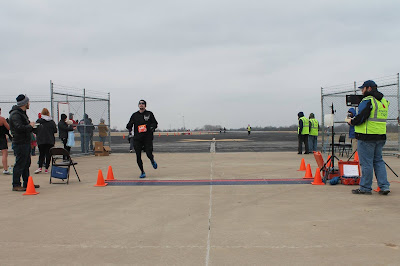 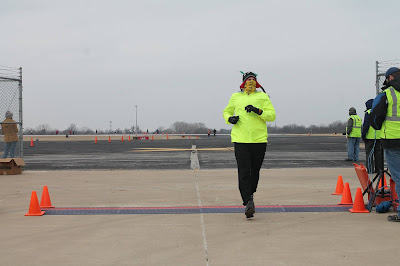 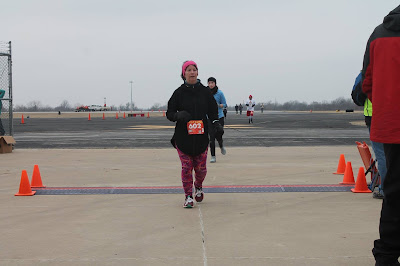 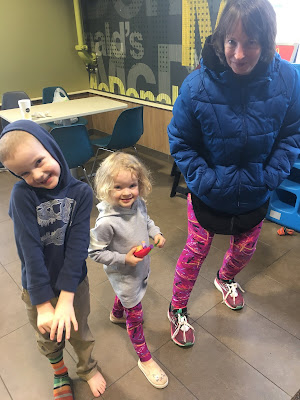 Posted by Liz Runningmomma at 2:57 PM