The Runway Run 5k being 2 weeks before the St. Patrick's Day 5k worked out really well for me. I gained a lot of confidence from the Runway Run and left feeling like I had more to tap into. I was confident I could match my finishing time from the Runway Run even though the course had been a little short there because I'd have more competition and a better finishing straightaway for a kick. I was also hoping for less wind! We had quite a few crazy windy days with 30+ mph winds during the week leading up to the St. Patty's day race. That left me a little worried about how strong winds might impact my race but each time I checked the forecast it was showing 2-3 mph winds. I was pretty excited about that! I also knew how to eat before the race since I'd had practice with the Runway Run. When races start early I usually don't eat and just drink some Nuun but this race started at 9:15. I figured since I ate 2 eggs and a piece of toast around 8:00 before the 10:00 Runway Run I'd get up at 7:00 so I could eat by 7:15 before the 9:15 race and that seemed to work out perfectly. I drank my tablet of Nunn on the way to the race.

The kids' fun run started at 8:30 and we parked around 8:15. The kids and I headed right to the start while Ty aired up the tires of the double stroller and met us there. Elise wanted me to run with her and then asked Oma to run with her too. Carter wanted to run alone. It was 35 degrees at the race start so the kids both wanted their coats. Elise was doing such a great job. She'd walk a little bit here and there but when she was running, she was really getting after it! We could see Carter ahead of us and after the turn around we were really catching up to him. When we started running with him he took his coat off and gave it to me so Elise wanted to take hers off too. Carter sat down at one point so Elise sat beside him and waited. As we approached the finish line Carter told Elise, "Let's tie," and that's what they did. It was so cute! We finished in 14:29 which was 13:16 mile pace since the course was 1.09. That may have been one of Elise's faster miles! When we finished I passed the kids' coats off to Ty as they went into the bounce house between races and I headed out for my warm up. I ran out to Riverside so I could use the restrooms there before heading back and skip the porta potty lines. I ran a 2 mile warm up and ran the last half-mile a little over half marathon pace to help get my legs ready to run fast which was a tip given to me by my friend, Sara, a while back. 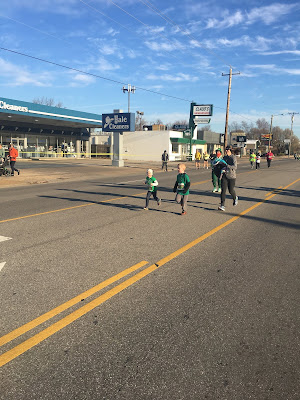 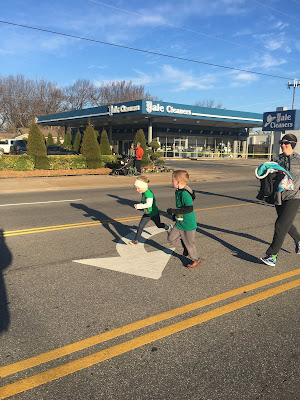 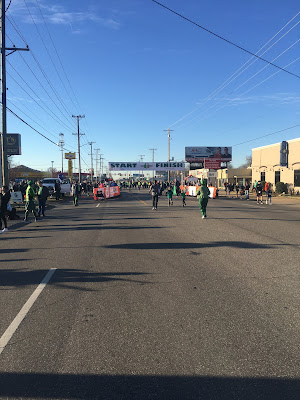 I had waffled back and forth about tights vs. shorts on race morning. Eventually I went with tights since it was supposed to be 35 degrees at the race start. I packed shorts and capri tights so I could switch if I changed my mind. My thin tights and underarmour were perfect on my warm up which made me think I would be overdressed for the race. I knew it was supposed to warm up quickly as the sun came out and it showed it would be 44 degrees by 10 am. When I finished my warm up I was kicking myself for not planning better. I meant to put my bag with a change of clothes under the stroller so if I changed my mind I'd have them to change into. In my rush to make it to the start of the fun run, I'd forgotten my bag in the car. If I'd had my clothes to change into I would have switched to shorts before the race, but I didn't really get overheated during the race. I did drop my gloves off with Ty before heading to the start because I didn't need them. I wondered how I'd find Jeremy in the starting area because I like to start with him. Then I saw his big green St. Patrick's Day hat and made it to him pretty easily. The front was packed and there were quite a few people who started up too far. I had to weave around a bit at the start and it took me a while to get down to even 6:30 pace. Eventually I was able to run out to the left and pass people to the far left. Jeremy had a decent lead on me from the start. I felt pretty fluid and strong. The first mile is usually a bit slower because you have a few small but long inclines to go up. My goal was to run the first 2 miles around 6:20 or under and then smoke the last mile of the race with the downhill. I went through the first mile in 6:15. I was really happy with that and hoped I could hold it close to that for the 2nd mile.
At some point after the 1st mile split and before the turnaround I passed a girl. When we hit the turn around I saw I was 3rd overall female. I was determined to hold my place. When we made the turn I looked to the other side and saw I'd already pulled away and had a decent gap on the girl behind me. I focused forward on a few guys between me and Jeremy and on Jeremy. I told myself to go with Jeremy. The 2nd mile is usually my slowest because it has the bigger hills in it. I went through the 2nd mile in 6:19 and told myself it was go time. I really started cranking it and was reeling in people between me and Jeremy. I closed the gap with him a little as well. I got a lot of cheers on my return trip which was fun and I cheered for a few people before I got to the point where I could no longer vocalize my cheering. I was pushing hard! I kept telling myself, make it to the last half-mile and then really let loose. I went through mile 3 in 6:04 which is the fastest mile I've run in a VERY long time! I tried to pick up the pace but I was hurting and couldn't really tell if I had or not. The tease about this race is you can see the finish line banner from really far out. I'd feel like we were close to the finish but then I'd check my Garmin and see how much farther we really had to go! A couple times I looked down and thought my Garmin showed 6:20 pace which I found discouraging because I felt like I was sprinting like crazy! Things started to get a bit fuzzy because I was giving everything I had and running so hard. I think I heard them announcing something about being a top female finisher and then I remember some kid came from no where flying past me right at the line. The spectators made a little, "ahhh," sound as he passed me like they felt bad for me but I really didn't care. Even if I'd known he was coming, I had nothing left. I ran my finishing sprint at 5:39 pace! I was really excited when I saw the clock wasn't much over 19 minutes as I neared the finish. 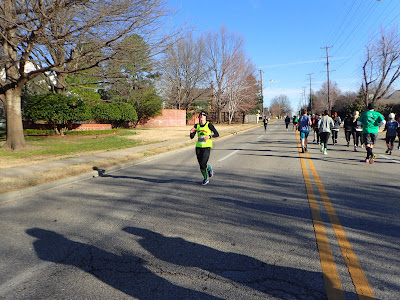 I was stoked when I looked down and saw I had run 19:18! That's the fastest 5k I've run since college and the fastest road race 5k I've ever run. I really feel like if I trained more for a 5k I could break 19 minutes again but I don't know that I'll ever do that. It was pretty awesome just to be under 19:30! In this race and at the Runway Run my legs just felt so dead toward the end of the race and even though I had a good finishing kick, it didn't feel like I was speeding up even though I was. I don't know if that's because I'm running to my full potential or if it's because I'm starting faster and not negative splitting like I used to in races. As I guess is my new thing with 5ks now, I dry heaved a bit as I walked over to get some water. Jeremy and I high fived and I turned around to watch other finishers. I told the 4th place girl good job and cheered for some friends. I saw Thomas finish and then took off on my cool down. As I went I cheered for dad and some other friends I saw. Then I cheered for mom and headed back to the finish with her and Jeremy. Jeremy and I talked about the race as we ran. Then I ran a little more of a cool down with my friend April as she ran her mom to the finish. I felt like getting a little more in so I ran down to Riverside again and got in a 3 mile cool down. I was definitely on a bit of a high from having such an awesome race!

Jeremy placed 26th out of 1,382 total finishers and 3rd out of 66 in his age group with a time of 19:15. I finished in 19:18 which was good for 28th overall, 3rd out of 764 females, and 1st out of 92 in my age group. Thomas finished in 21:46 which put him 75th overall and 9th out of 70 in his age group. Dad had an awesome race, finishing in 24:11, good for 149th overall and 10th out of 34 in his age group. Ty pushed the double stroller and finished in 29:18. He placed 419th overall and 35th in his age group. Mom ran the race in 35:41. She was 737th overall and 7th out of 32 in her age group. This is such a competitive race with a lot of really fast runners. I was excited to placed 3rd overall female. The highest I've ever placed in the past was 6th overall but I also beat my fastest time on this course by almost a minute! 57 seconds to be exact. I've never raced particularly well at this race until last year where I pulled out a good time by running a smoking fast last mile after 2 sub-par first miles. This year was the first year where I felt like I ran a pretty much flawless race. It was the best race I've ever run on this course and I was very excited for that. Since this race is a big deal for my race team I was glad I put together such a solid race for me! Read about last year's race here, 2017's race here, 2016's race here, 2014's race here, and a different St. Patrick's Day race we ran in 2013 here. 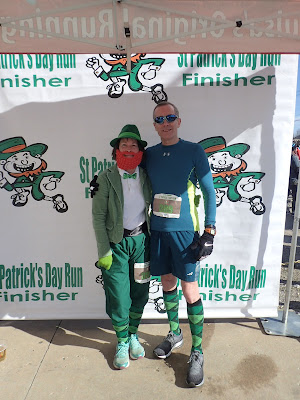 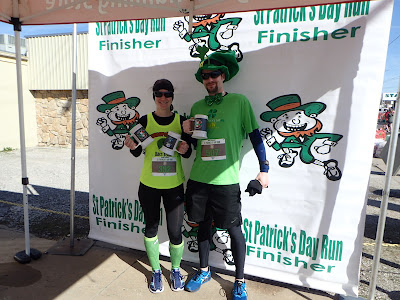