Last year Jeremy and I both ran the double as a team, The Sweet Sibs, read about it here. This year we decided to do it again because it was so much fun! That means we run a 5k which starts at 7:45 and then the 10k which starts at 8:30. I had a really awesome 6 mile tempo the week before the race where I finished in a 6:45 average and Strava said I had run a 42:04 for a 10k of my run which would have used 0.2 of my warm up in the time. I partly wished I was just running the 10k at the Sweetheart Run because I felt like a big 10k PR is in my reach right now. My 10k PR is 41:49 but was run on a super flat course. The Sweetheart Run is challenging because there's a very steep and long hill going into mile 5 which destroys me every year and it's hard to come back for a strong last mile after that, especially because there are some smaller hills in the last mile! I knew doing the double was the best option for me because it would keep me from trying to go for a PR on a course that I've never run particularly well on. I was super excited about the race. I love doing the double because there's no pressure to run specific times. Even with the forecast of 24 degrees at race start and a feels like 17 degree temperature I was still really excited to race. Typically that means I'm going to have an awesome race when even terrible conditions don't dampen my excitement. The only bummer was it was too cold for the kids to do the Fun Run. Carter has done some Fun Runs in really cold weather while wearing a coat but didn't enjoy it which is the whole point. 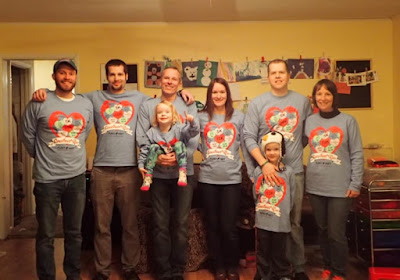 When we got to the race I ran a mile warm up with Thomas and then took off my wind pants and jacket. We took off at the start of the 5k and I had passed all the women pretty early on. I felt good but was also really glad to not actually be racing the 5k. I ran a pace that felt comfortably hard but would still leave me with plenty left for the 10k. My first mile was 6:34. That was great because my goal for the 5k was to run under 21:00 minutes and I was hoping to follow that up with an average pace under 7:00 for the 10k. I ran the first mile with Thomas before he fell off pace. After that there was a guy out in front and then Jeremy and a guy close to him. There was a huge gap from 3rd place to me and then another big gap behind me to the next person so I figured I might as well coast the race and save more back for the 10k. I just wanted to stay around 6:45 pace so I would still run under 21:00. We hit the turn around and I loved getting to cheer for everyone in my family. My 2nd mile was 6:40 so I still had a nice cushion for the last mile. I figured I could run the last mile in around 7:00 and still be under 21:00 but I didn't want to let up too much. It was fun coming around the corner for the last quarter mile or so and having a police motorcycle stay with me to alert the volunteers at the finish line that the top female was finishing. They stretched a really cute 1st Female Finisher banner across the finish line and I was all smiles as I crossed it in 20:47. My last mile was 6:46 and then I finished out the last portion of the race in 6:19 pace. I didn't really feel like I picked it up at the finish but I did get excited seeing the banner across the finish line so I must have! 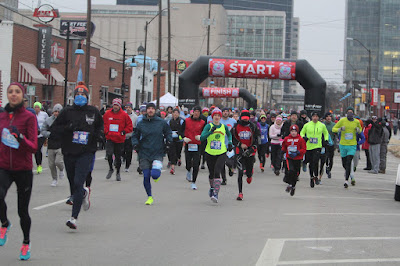 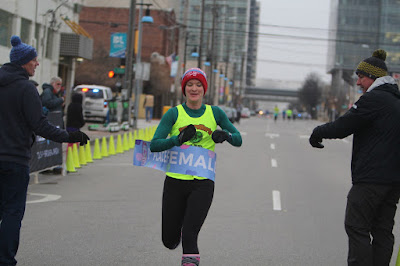 I watched Thomas finish and then Jeremy, Thomas, and I all walked to Thomas' car. I switched out my mittens for gloves because my hands had gotten really warm and sweaty during the 5k. Then I took off on my cool down. I jogged out to mom and ran to the finish with her for a mile cool down/warm up for the 10k. When I finished my mile I had a little bit of time before the start of the 10k so I stopped off at the porta potty before going to the start. Jeremy and I stood together at the start. We took off and my legs felt great. I was surprised because last year my legs were a little tired in the 10k. They felt pretty fresh! Within the first portion of the race I'd moved into first female. My first mile was 6:43 and I was surprised by how good that felt. I caught up to Jeremy around the 1st mile and we ran together after that. I was impressed with how well he was running in the 10k after killing it in the 5k, he had run way faster than I had! My 2nd mile was 6:40 and I started getting really excited. I knew mile 5 would be slow so I didn't allow myself to believe a PR would be possible because I knew it would be impossible to run a 6:40 mile up that hill, especially after running a 5k beforehand. But I just kept thinking, I'm going to be so close to my PR 10k after having already run a 5k! Mile 3 was 6:34 going down the hill we would have to go back up on the return trip. I felt so good I was tempted to start picking it up after the turnaround but I kept telling myself to take it one mile at a time. I figured I'd wait until I got up the hill before I took off, if I still could. It was hard not to get too excited running down Riverside on the flat portion of the course when I was still running 6:40 miles!

We made it to the turn around and headed back on the course. It was fun to see all the 10k runners still going out and a lot of them cheered for me and told me I was the first place female. Jeremy saw one of the doctors who helped him after his accident and they high fived. It was funny because I'd fallen about a step behind him but was closer to the other side of the road so I almost got clothes lined by their high five. Mile 4 was also 6:40 and as we neared the turn where we'd been directed incorrectly in years past I told myself even if they directed us the long way around I was going the correct way, but the police officer directed us the right way this year. I powered up the hill and Jeremy fell behind me. I figured he'd catch back up after the hill. I was still feeling strong and was excited that my legs weren't burning when the elevation finally leveled out like it has every other year I've run the 10k! I knew mile 5 would be slow due to the hill and focused on catching the guys ahead of me. I passed two of them pretty quickly after the hill and slowly started reeling in the next guy. Mile 5 was 6:59, I knew that meant a PR was out the window, exactly as I had expected, but I was excited I'd finally run that mile in under 7:00. It was the first time I've run that mile of the 10k under 7:00! I pulled up next the guy ahead of me with about a mile to go and we ran together the rest of the way. He'd pull away from me and I'd catch back up, then he'd pull away, and I'd catch up again. It was exactly what I needed to keep pushing that last mile. I told myself even though it wasn't possible to run a PR, I still wanted to run the 10k as fast as I could.

Toward the end of the race a police motorcycle pulled up beside us and led me to the finish. The guy pulled away from me again up the last little hill and once we crested it and turned the corner I took off and started catching him again. When I got beside him, he took off again, but I kept fighting. I didn't really care about beating him but I used him to help me push to the finish. When the finishing clock came into view I was so excited when I saw 41 minutes in the minute place. I knew I wasn't going to finish under 42:00 but I wouldn't be much over. I ran mile 6 in 6:46 and then finished out the last section of the race in 6:07 pace. It was fun to get to break the tape again. The guy I'd been racing beat me by a second and ran to the side of the finishing tape. We high fived as we walked through the chute. I was just so excited with how the race went! I finished in 42:12 which is only 23 seconds over my PR and that was on a totally flat course. Later my Garmin data wouldn't upload to Strava so I got on my computer to manually upload it and saw that miles 5 and 6 were both 6:40 pace grade adjusted! If the course had been totally flat like the Zoo Run where I ran my current PR, I would have run a PR even with a 5k already on my legs! I'm so excited about where I am right now and I still have 6 weeks of training to go before the half marathon! This was the 2nd fastest 10k I've ever run and was even faster than the 10k I ran on this course 2 years ago when I just ran the 10k! 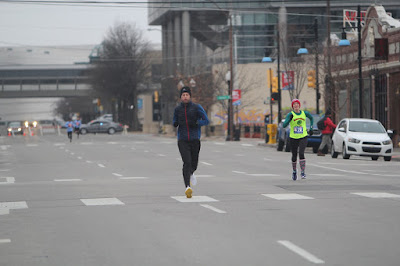 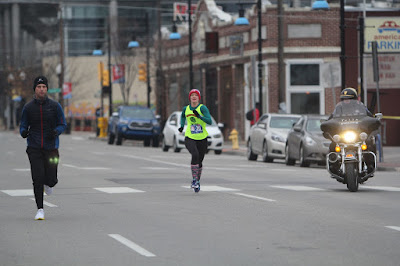 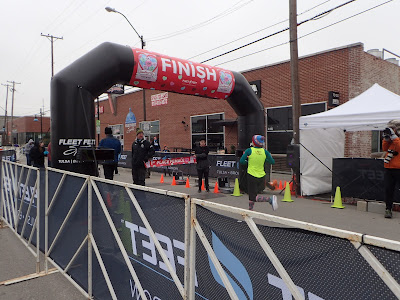 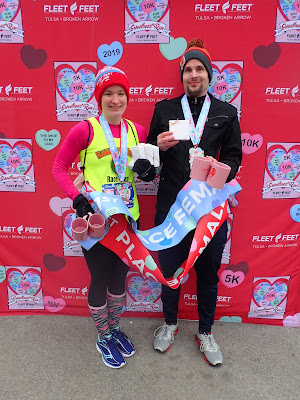 Posted by Liz Runningmomma at 1:17 PM