I haven't done a post like this in a long time and I had some things I wanted to get down so I figured this was a great way to do it. There has been a lot of stuff I've been loving lately! But here are just a few of those things.

How excited Carter gets for special days at school. Today was dress like a favorite book character day and he chose to dress as Cat in the Hat. He remembered the librarian told them on that day they would have green eggs and ham for lunch which he was super excited about. As he got dressed in his costume he asked where his tail was and I realized I'd totally forgotten about the tail! Nothing like a last minute tail thrown together! I ended up stuffing one of Ty's undershirts into one of his black dress socks. Carter thought it was too short so I got another sock and filled it with an undershirt and safety pinned the socks together. It ended up looking really good. When he stepped out of the car to walk toward school the teachers at car line just loved his costume! He talked all about what he thought his friends would dress as and whether they would get green eggs and ham for lunch the entire way to school. It was so cute! 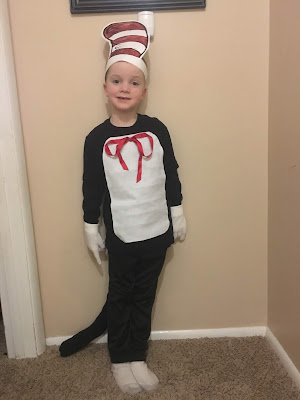 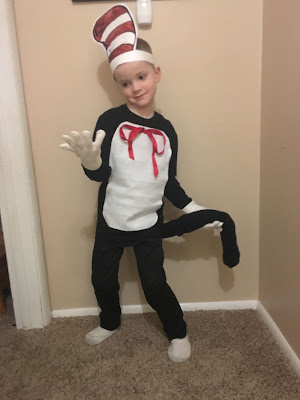 Shallow by Lady Gaga and Bradley Cooper. I've been loving this song ever since first hearing it and finally after we watched the movie, I downloaded the soundtrack for free on Hoopla through our library. Elise says it's her favorite song. One day in the car she passed me a microphone after dropping Carter off at school and asked me to sing for her. I sang Shallow since it was on the radio and after that it was the only song she would let me sing. I was laughing thinking how weird I must look to the people driving past us, but when your kid who always asks you to stop singing passes you a microphone, you just do it! 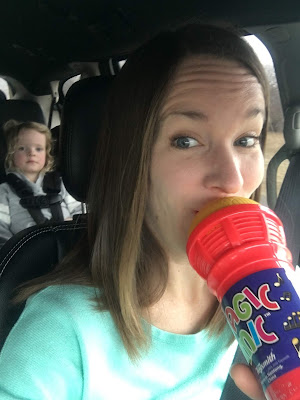 Carter's reading skills! He has gotten to be such a good little reader and loves reading books in Spanish at home. Now at bedtime he likes to pick a book for me to read to him and a book for him to read to me. His favorite right now is Elefante y Cerdita libros. It's so cute to hear him lay in bed at night while reading to himself with lots of expression! 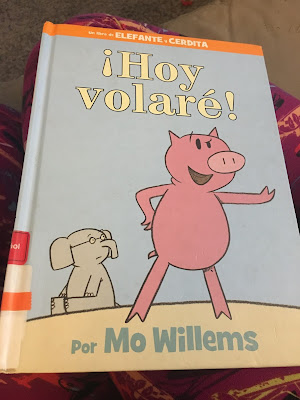 Yoga with Adriene. In January I started having some heel pain related to a tight calf muscle. The stretches and exercises I've done in the past just weren't working their usual magic. I found some other stretches that seemed to help. Then after the Sweetheart Run I did an easy 8 mile run that next morning and all the sudden my calf was a tight ball of mess. One of my friends asked what my calf measurement was for comparison while looking into compression sock sizes and we realized my left calf was measuring 15 inches around while my right was measuring 14 inches! I wasn't sure if the left was always bigger or if it was due to swelling. Turns out it was not normal. I went to a physical therapist and she showed me some new stretches and a different way to foam roll to get into the calf better. Now my calves are both measuring 14 inches around! The PT told me I don't have much flexibility in my hips and I started to wonder if that's where a lot of my issues are originating as that's where I first had trouble when running way back in high school. I thought to help with flexibility and to open up my hips it would be good to do some yoga. Ty was on board and actually wanted to do it with me! We've been doing it every night for 9 days straight and it is definitely helping stretch me out and I love it! It's much nicer to spend 30 minutes doing yoga with Ty than sitting on the couch vegging out while watching a show on Netflix. And I'm all about something that will hopefully keep me healthy and keep away injuries so I can reach my running goals! Here's to 30 days of yoga and beyond and the great thing is it's free on YouTube!

Barbeque ranch dressing. I've been eating spinach salads for lunch pretty much every day. I got a little bored with the salad dressings we have. When we came home from Christmas at Ty's parents' house they sent some smoked chicken breast home with us. I decided to make my own barbeque ranch dressing for a salad with the chicken on it by putting half an ounce of ranch dressing and half an ounce of barbeque sauce on my salad. Then I just mix it all up. It's so delicious and gives me something different. It also cuts down on calories because barbeque sauce is lower in calories than ranch.
Posted by Liz Runningmomma at 1:15 PM