We adopted Tesla on October 26th. I planned to just celebrate her birthday on her adoption date like I've half-heartedly done with Skippy. Ty wanted to have a better idea of how old she is since she was estimated to be about 8 months old when we got her. So I counted out 4 months from October and we decided to celebrate Tesla's birthday on February 26th. Then we kind of forgot, oops! So we celebrated her birthday that weekend which worked out well because my parents were in town so we had a big doggy birthday party at our house! The kids picked strawberry cake and pink frosting for her cupcakes and I thought it would be fun to top them with maraschino cherries. Ty made the cupcakes, I frosted them, and the kids decorated them. Giving the dogs cupcakes at the party was hilarious. My dad kept saying one of the dogs was going to end up getting screwed and he was right. Carter gave Tesla her cupcake while she was sitting on the futon. the bottom portion fell out of her mouth and Moneypenny swooped in to eat it out from under her. Tesla fell very ungracefully off the futon trying to save it. Fezzik straight up grabbed Garo's cupcake out of his mouth. Oreo started to run from the room to eat by herself in the living room but I stopped her before she made it to the carpet. She panicked and dropped her cupcake which Moneypenny gobbled up immediately. Moneypenny also managed to steal Bobbie's cupcake right away. It was hilarious! So Fezzik and Moneypenny ended up being the gluttons of the day. 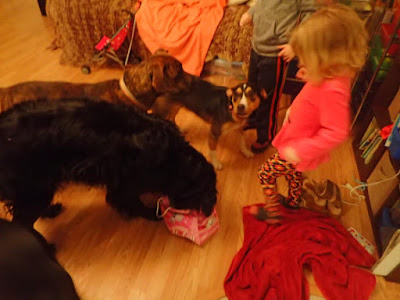 Tesla has been a wonderful dog for the kids, putting up with lots of  abuse along with the love. She has also been an awesome running buddy. She absolutely loves to run. When I get up in the morning to run she immediately starts crying to go with me. When I get home from a run without her she is just distraught when I get home, jumping all over me hoping I'll go back out. Unfortunately she's on a running time out after an incident that happened early lasts week. I took her on a run with me in the evening because that morning the temperatures were insanely cold. We got followed by a dog which scared Tesla. She ran to hide behind me and tripped me from behind. I fell hard on my left knee and slid across the ground. In my attempt to keep myself upright I twisted my right hip and I've had a bit of a twinge in it since. I think had I been running with a regular leash I would have had more control and possibly wouldn't have fallen, but the hands-free leash is so amazing and works 99% of the time. Ty and I decided it might be in my best interest not to run with her anymore until after the half-marathon. That way I don't get injured running with her and ruin the race I've been training so hard for. Hopefully I can have her trained a little better on the hands-free leash this summer. I'm not sure whether I'll actually wait that long to run with her since she loves it so much and is so desperate to go with me. I'll definitely wait until my knee and hip stop hurting before venturing out with her again. I'm frustrated and disappointed but there will always be hiccups running with a dog.

Random funny story about Tesla. Elise and I walked Tesla to the park. When we got home we all went inside and I put Tesla's leash away. Then I went back outside, I thought alone, to check the mail. I made lunch and Elise and I were sitting eating. Then Elise said, "Where's Tesla?" We called for her and she didn't come. We checked in the backyard and she wasn't there. We walked all through the house calling her and she never came. Finally I decided to check out front to see if she'd followed me out to get the mail. I opened the front door and called her name and she came running. She'd just been hanging out in the front yard for probably around 40 minutes and didn't run away! I was so impressed.
Posted by Liz Runningmomma at 2:18 PM