On Christmas Eve the kids were coloring and then Carter started writing notes to Santa Claus. He wanted to know if Rudolph was real. He wrote on sticky notes and hung one on the back door and one on the fireplace. It was so cute. Ty went for a run in the morning and then ran some errands when he got back. The kids and I stayed busy cleaning up and they did some learning pages. After I got Elise down for a nap I headed out for a run and when I got back Oma and Opa had arrived and Thomas had also come over. The kids were so excited to help unload the car by carrying in presents. When we'd finished unloading Oma and Opa's car, Jeremy arrived with more presents. The kids were thrilled! They had so much fun arranging the presents under the tree. 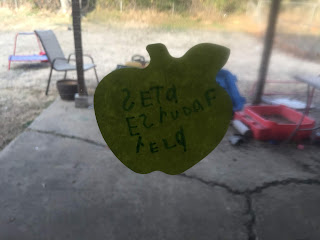 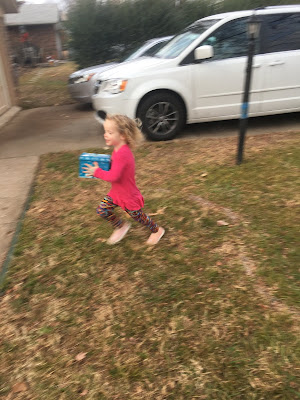 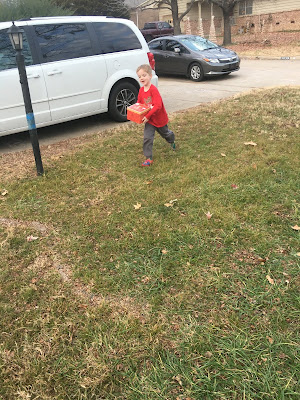 Elise was desperate for me to swing her so once I was showered and dressed I headed outside to swing her. The sun was starting to go down and the sunset was absolutely beautiful! I had to get some pictures of it! We enjoyed a delicious dinner with a wine glass faux pau on Opa's part. Then we let each of the kids open a present. They had a blast playing with Carter's Kinetic Sand he opened. After dinner Carter performed for everyone. Elise was supposed to perform with him but didn't want to practice with him so she got the role of ticket puncher. Carter cut little strips out of yellow paper and gave them to us as our tickets. As we came in Elise put a hole punch in our tickets. Carter sang a couple of songs and then the program was over. 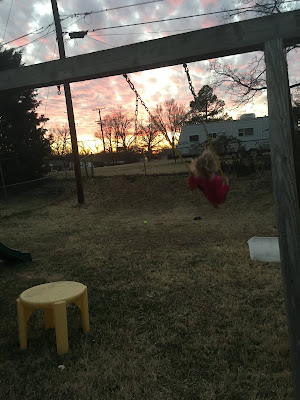 We ate a little later so we ended up going to 8:30 pm service. I was a little worried that would be too late for the kids but they both did really well. When we got home Carter fell asleep almost the moment his head touched the pillow and Elise was asleep shortly after! Elise was cracking me up at church. She kept shushing anyone who made noise but then she'd loudly ask questions about what was going on. They announced there would be hot chocolate and cookies in the CLC after service. Elise started talking about getting hot chocolate and asked Opa if he'd cool her hot chocolate for her if it was too hot. When she said he would, she shushed him. I couldn't stop laughing! She was so excited about getting to have a lit candle to sing the last song and really enjoyed it! When we got home we quickly did jammies and tooth brushing, then the kids set cookies and milk out for Santa. We had the kids in bed by 10ish which was 2 hours later than normal but it was worth it to go to church. 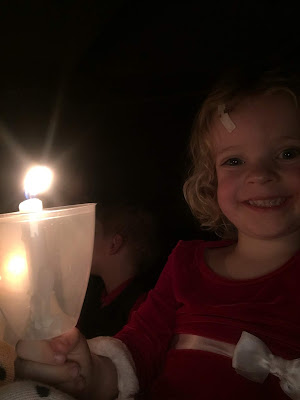 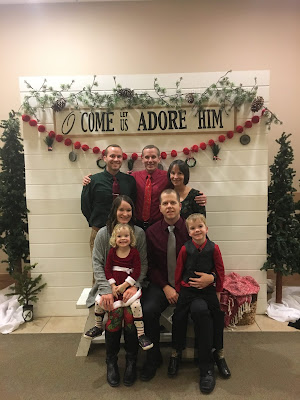 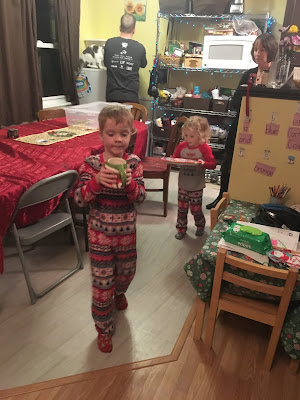 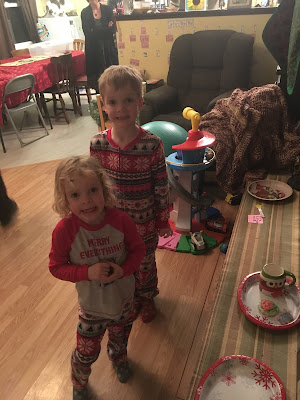 We were in bed ourselves around midnight. Carter was so excited he woke up at 4am. I was really hard asleep and he showed up next to my side of the bed yelling about what Santa had left under his little tree in his room. He scared me so much I had a really hard time falling back to sleep. We told him it was too early to get up and he needed to lay back down. He wanted to lay with us but kept rolling around, making noise, and keeping us awake. Finally around 5am Ty took him back to his bed. Carter said he thought he went back to sleep for a bit when he was in his own bed and then got back up around 7am. I heard him talking and thought he was talking to Elise so I slowly rolled over. Then I realized his voice was coming from the kitchen and he was actually talking to Oma and Opa so I jumped out of bed and ran down the hall so I could see him find his Santa presents. He was really excited to see all his toys and then later realized that Santa left him a note saying that Rudolph was real. Later I walked by him as he was playing and heard him say to himself a few times, "I can't believe Rudolph is real," with just the sweetest amount of excitement! The kids opened all their presents from Santa and started playing with them. We were just getting ready to eat breakfast when Thomas came over around 9:00. Elise got out her nail polish and lip gloss she opened on Christmas Eve. She talked all the guys into getting their nails painted and went around putting lip gloss on everyone. 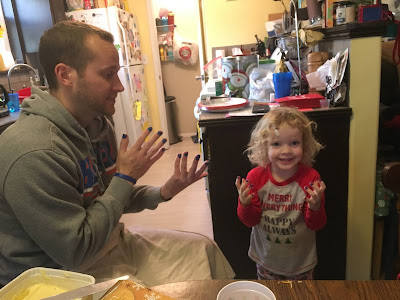 Jeremy got to our house around 10:30 and was lucky to have missed the nail painting party. Carter was really excited to go into the living room to open presents. I loved his reactions to his presents. He was delighted to get a stuffed Gerald from us but was disappointed when he realized the Elephant and Piggy books we got him to go with Gerald were in Spanish. My favorite reaction of the day was Elise opening her roller skates from Jeremy. She screamed, "This is what I wanted," and then ripped into them! Once she got the wrapping off she realized he had stuffed candy and fruit snacks inside the skates. That definitely distracted her! She called them "skaters," which in itself was precious! Carter went through his presents really quickly, ripping them open and then moving on to the next. Elise moved much slower and really exclaimed over her presents as she discovered what she'd gotten. When the kids were finished opening presents, they played while we opened our presents. We played the game where we guess what might be in our present for points. Mom won by 1 point and I came in 2nd place. It was fun. Carter was so excited for Jeremy to open the bongos we got him. 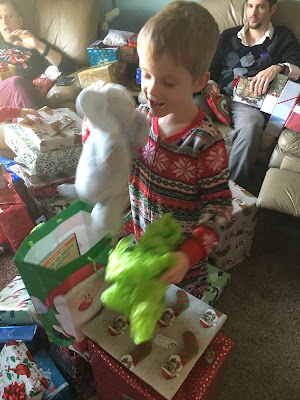 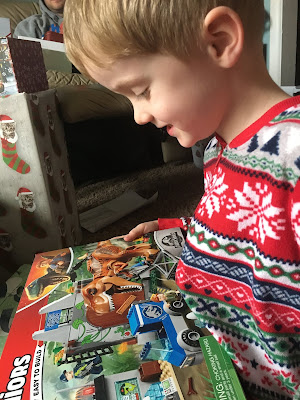 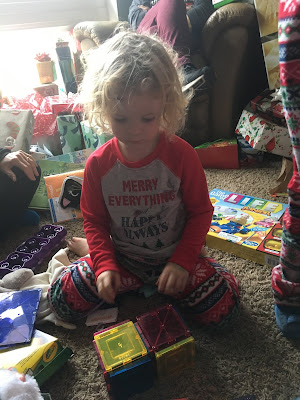 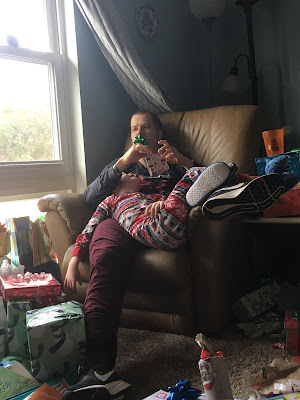 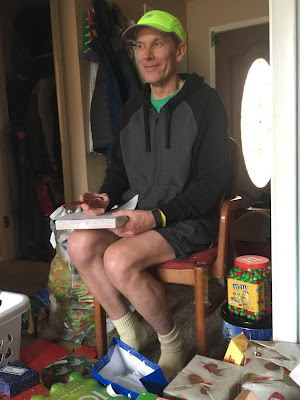 After present opening we ate lunch and then I laid down with the kids. Elise fell asleep but Carter didn't so I let him get up. He wanted to watch one of the new movies they got so I put that in for him to watch while Jeremy and I headed out for a run. We had been excited to wear our new light up hats for our run but it ended up being 58 degrees so it was too hot for a hat! I borrowed Ty's Meowy Christmas t-shirt so I could be festive anyway. We had leftovers from Christmas Eve dinner and then played games after the kids went to bed. It was a wonderful Christmas and we are excited for Christmas Round 2 with Ty's family coming up!
Read about last year's Christmas here, 2016 here, 2015 here, 2014 here, and 2013 here.
Posted by Liz Runningmomma at 7:30 AM