Thankfully Carter was healthy on his birthday this year! His birthday fell on a Friday which was awesome because his teacher has guest readers come in to read to the class on Fridays. I signed up for Carter's birthday and ended up taking the day off work because it didn't work out for me to get coverage and come to work late. Ty decided instead of taking a long lunch to eat lunch with Carter, he'd take the day off work too. That was perfect because I was able to leave Elise with him when I went up to Carter's class to read. I got up earlier than normal to get my run in before Carter woke up. I wanted to be there when he first woke up on his birthday and saw the streamers and signs I had hung. I got home at 6:50 and he ended up not waking up until 7:30! But I'm sure if I hadn't gotten home until 7 or 7:15 like I do some days, he would have woken up earlier! That's just how it works. I set out all his birthday presents, except for his one big present, on the table the night before so he could open them before school if he wanted. He decided to open them all that morning and we saved his big one for his party that evening. He requested pancakes for breakfast so that's how he started his day. It was a fun morning although a little more rushed than I had figured it would be since he slept in! 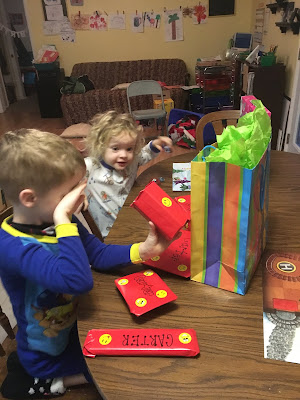 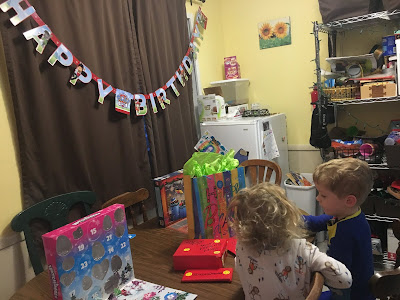 I dropped Carter off at school at the normal time and then parked in the parking lot and went in. I told his teacher I could work on anything she needed done until it was time for the guest reading. I worked on laminating and cutting some things before it was time to read. When I was in the room while the teacher grabbed materials for me, I got to see Carter get his birthday sticker. It was so cute and he was so excited. He had told me in the car on the way there that morning that he would get a birthday star sticker to wear. He also said he was going to end the day on a good color for me! The night before I had Carter pick out which books he wanted me to read to his class. He picked Mother Bruce, Hotel Bruce, and Santa Bruce, all by Ryan T. Higgins. I had time to read them all and Carter was so pleased. When I was done reading he came up and gave me a hug in front of his whole class. I love his sweet heart. I got home just in time to go with Ty and Elise to pick up lunch before heading to eat lunch at school with Carter. He picked Panera mac and cheese for his lunch which was super convenient because there's a Panera right by his school. We had fun eating lunch with him and he was so cute, he had saved a seat for me beside him.
We loaded the car up after getting back home so we could leave straight from picking Carter up at school to go to my parents' house. We were running a race the next day so we were headed there for the weekend. Carter was so excited when we picked him up and told us he had ended his day on morado (purple) which is the best you can do and means you've had an awesome day! I told him since it was his birthday he could have his tablet early in the car. Normally we read books for the first half of the trip and then they can have their tablets once it gets dark. He was really excited about that. We practiced his Spanish sight words, vocabulary, and then books and then he got to have his tablet. We got to my parents' house in time for dinner and then Carter opened his present from us, a present from my parents, and some presents from my Aunt Judy and Uncle Mike. He was thrilled and enjoyed playing with his new presents for a bit before taking a bath and going to bed. He had a wonderful 6th birthday and we are so thankful we've had another wonderful year with our sweet boy! Read about Carter's 5th birthday here, 4th birthday here, 3rd birthday here, 2nd birthday here, 1st birthday here, and his birth story here. 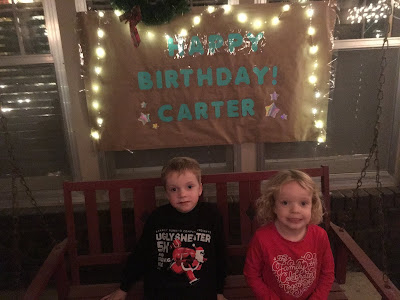