Carter had his tonsils and adenoid out on Monday, May 21st and had another set of ear tubes placed, read more about that here. My parents, his Oma and Opa, came Sunday evening so they could stay with Elise while Ty and I took Carter in for surgery. My dad had just finished out the semester and could do most of his work via e-mail and phone for the week so they went ahead and packed for the entire week. They figured if we ended up not needing the extra help the whole time they'd go home, otherwise they'd stay until we left for our visit to Topeka that Friday. It was so nice having them there to help! We had originally thought we'd take Elise in with us but when we found out we had to arrive at 6:15 we were so relieved we wouldn't need to do that! When we got home from surgery Carter wanted me to sit with him and he spent most of the morning sitting on my lap as he rested and watched tv. Eventually he was okay with being with other people so I was able to take a little nap to catch up on some sleep. I'd only gotten about 6 hours of sleep the night before surgery and I figured with getting up to give him medicine in the middle night I'd be better off if I was a little more rested starting out the week.
The nurses had all stressed giving him round the clock pain medication every 3 hours, even at night. I came up with a system that worked really well for us. I had a notebook and the night before surgery I listed out the amount of each medication Carter could receive. Then I split the page in half and wrote medication at the top of one column and time on the other. That way we could track what we'd given him when and wouldn't have to try to remember whether he should be taking Tylenol or Ibuprofen. Each time I gave him medication I reset the alarm on my phone for 3 hours later. The first dosage at night I was so tired and out of it when my alarm went off. My arms were all wonky and shaky because I'd been in a deep sleep so I had a hard time pouring the medicine. I found each night that the first time I got up was the hardest because I'd usually only been asleep for about an hour and a half. When I'd slept for almost 3 hours between doses it was easier. The first time I gave him medicine I put it in a syringe and attempted giving it to him while he was asleep but he choked on it and woke up so I started waking him up for his medicine when I went in at night. That worked out really well until night 3. He'd sit up, take his medicine, and go back to sleep.

On night 3 I had a really hard time waking him up and when I finally did he cried and screamed and wouldn't take his medicine. It was terrible. Ty came in and we eventually had to just hold him down and force the medicine down his throat. After that he wanted me to sleep with him so I slept terribly that night and was pretty miserable in the morning. The wonderful thing about my parents being with us was that I didn't have to get up early to run before Ty left for work. I'd sleep until the kids got up and then run later in the day. It was hot but I was so tired, I'd take running in the heat with more sleep over little sleep and a cooler run! The night he refused meds I was tempted to just skip the dose because he had been seeming to feel much better that day but I had a friend who said she let her son sleep on day 3 and didn't wake him up because he'd been doing so well but the next day he couldn't swallow because his throat hurt so bad! I was glad she told me that because it gave me the confidence to know I needed to power through and give him the meds! The rest of the night I was able to give him the medicine while he was asleep without waking him through some miracle. I tried that the next night and he choked, spitting the medicine all over the bed. 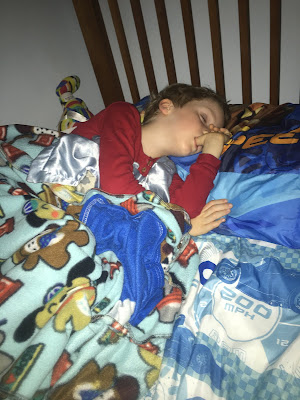 For the first 3 days we had to give Carter ear drops, I think due to his tubes. It was terrible, he would scream and cry. A few times I actually had to pin him to the ground between my legs to get them in. When I re-read his information I saw it said a tonsillectomy will make your ears sore. Since he also had tubes placed his ears must have been pretty sore. I felt bad for him but we pushed through and got our 6 doses of drops in! I'd say the ear drops were the worst part of the recovery period.

Day 4 he really started fighting taking his medicine and I had to hold him down in the morning so my mom sent my dad out to find a chewable version of children's Tylenol and children's ibuprofen instead of the liquid version and Carter switched over with no problem! I think after 28 doses, he was just sick of the liquid medicine! I was glad we pushed through with the meds the night before because on day 4 Carter started to mention his throat was getting sore before he got his dose of medicine. Around that time we switched to every 4 hours instead of every 3 hours in a hope to gradually reduce the number of times he got medicine each day. His last dose of medicine at night was at 9 pm so we just let him stay up until 9 so I wouldn't have to wake him after an hour of sleep. The added benefit was that he and Elise slept until 8 most days which was really nice after waking every 3 hours at night to administer medicine (with the first dose coming about an hour and a half after going to bed so I was getting up 3 times to administer meds).

One of Carter's friends was celebrating his last day of school and invited Carter to come out to get ice cream with him. It was day 4 and he had been doing really well so we went for it. He was well behaved at the ice cream shop but when we went to leave he cried getting into the car and looked like he was going to fall asleep on our drive home. It was probably a little too much for him which was good to know. While talking with his friend, his friend told him his breath was stinky. Elise mentioned his breath being stinky too at some point. I didn't think it was too bad. At least not nearly as bad as I was expecting due to what some friends had told me. I felt bad for Carter because he told me later, "No one likes me because my breath smells bad." I explained to him that they still liked him and that it was okay because his breath would go back to smelling normally soon.
I was a little nervous to discontinue the pain medication because our nurse said Carter might have an increase in pain around day 7 when the scabs fell off. We kept his dosage to every 4 hours up until day 4 and then started extending the length of time between dosages. We had a couple times where he started to have some pain before his next dosage so I went ahead and gave it to him and then gave his next dose earlier to get back ahead of the pain. I set alarms on my phone and gave him medicine in the middle of the night until day 9 because I was worried about him waking up in pain. He asked for medicine once on day 9 and once on day 10 and hasn't had any pain since. He's still avoiding lemonade and other acidic drinks and foods of his own accord. Thanks to the recommendation of friends and the nurses I felt like we were well prepared for Carter's recovery and everything went really well. I was shocked with how much of a difference it made with his breathing, swallowing, and his voice pretty much immediately. I still start every time he talks because his voice sounds so different. It is weird but I also love it because I know it's a good thing that his voice sounds different. I'm so glad we went through with the surgery. Carter is sleeping better and is less fussy in the afternoons already! He also hasn't snored since the night before his surgery!
Posted by Liz Runningmomma at 3:18 PM