On the way to the Starry Night race Carter and Elise were talking about the fun run in the car. They were cracking me up so I made a note of their conversation which went like this:

Carter: I'm going to run by myself. Which people are you going to run with Elise?
Elise: I'm running with Oma.
Carter: Okay, make sure you tell her then!
Elise: And Opa!
Carter: Opa can't run with you.
Elise: Why not?
Carter: Because he would get too tired. You wouldn't want 2 people to get tired for their races, would you?

It was so cute. True to her word, Elise wanted her Oma to run with her. Carter wanted to run alone but was excited to go over to the start and didn't want to go alone so he asked me to go with him. Once we were over there Elise followed us and pretty soon both the kids were dancing around on the starting line which was adorable! Carter decided I could leave once Elise and Oma were with him so I headed over to find a good spot to watch. Elise kept running over to kiss me before the race started which was the sweetest. The photographer asked me why I wasn't running with her and I said, "Because she wanted her Oma." She said it was sweet she still wanted to give me kisses. 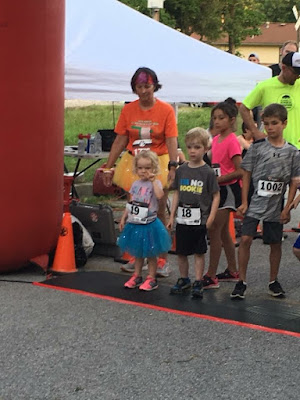 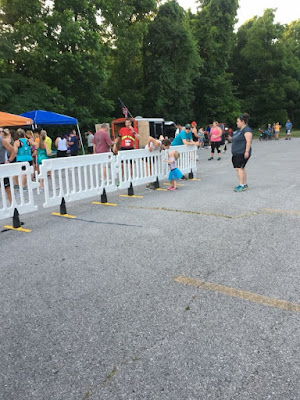 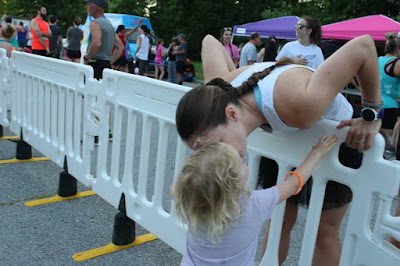 Carter was wearing his Paw Patrol shoes for the race and I almost suggested he pick different shoes before we left the house because the Velcro strap was starting to break. I decided it wasn't a big deal since the race was only a mile and he could wear whatever shoes he wanted. He took off at the start and looked great. I ran a mile warm-up and then headed back over to watch him finish. When he came running toward me I noticed he appeared to be limping as he ran. When I looked closer I realized his Velcro strap had come loose and was flapping. He was running funny to keep his shoe from flying off. After he finished he told me he'd been running and his shoe flew off which caused him to fall down. He said a big girl helped him up and he kept running. I realized that was why his bottom was white with gravel dust. I was impressed that even with his shoe malfunction and fall, he still finished in 11:28! Once the race got going Elise told my mom and Ty she wanted to run by herself so they let her run up ahead of them. My mom said just a short ways ahead she fell down and before either of them could run to her, an older girl was helping her up. I thought that was so sweet. Elise ended up wanting to be carried the rest of the way and finished a little after 15 minutes. My mom said Elise probably ran about 4/10 of a mile before falling and wanting to be carried. I love that both kids enjoy the races so much! It's so cute to hear Carter talk to his friends about them. After his experience last year he always talks about how you'll get a side stitch if you go out too fast. When we were watching an old tape of our high school races Carter said, "They are going to get stitches," about some boys who took off really fast in a race. If nothing else, he remembers not to go out too fast because your side will hurt! The kids were excited to get ice cream that had gum at the bottom. Carter was sure to point it out for Elise when she got ice cream so she'd know! Ty took the kids home after we started the 10k so they could go to bed at a decent time. 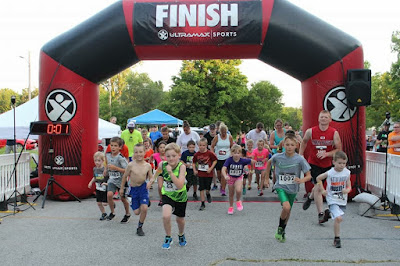 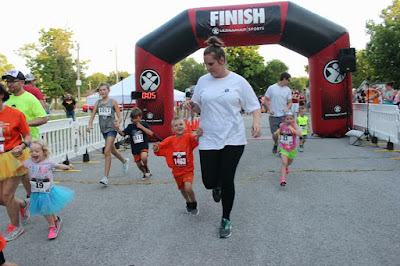 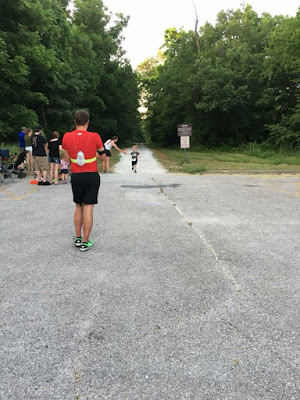 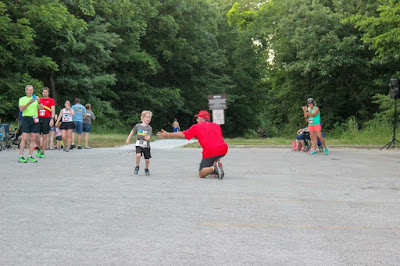 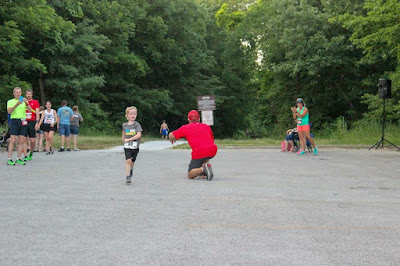 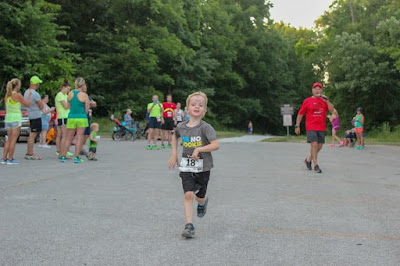 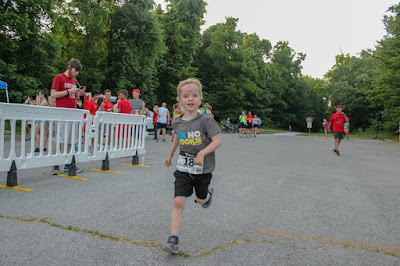 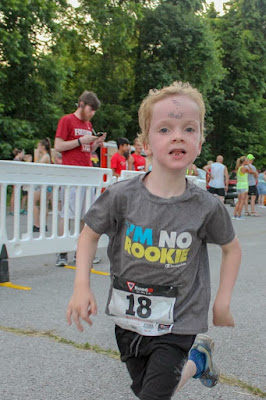 Posted by Liz Runningmomma at 1:23 PM