Last Saturday evening, June 9th, was the first race in the summer race series we run each year. I decided to do the 10k at this one and Ty sat the race out so we wouldn't have to run with the stroller. After last year's race series we decided the kids are getting too big and heavy to race with in the stroller. I'll sit out the July race and then run again in August while Ty sits out. I was excited to see how I compared to last year at this time. I felt like I was in better shape than I was last summer but I also haven't been doing speed work at all. My last speed workout was in March. Last summer I started speed work back up in May. But after the issues I had heading into my fall training cycle I decided a summer off hard workouts with just base miles was the way to go for me. I've run my best fall seasons when I've taken the summer to just run easy base miles. That being said, I didn't take any time off after the Aquarium Run Half Marathon, I just kept running but it's all been easy. Last spring I had to take a couple weeks off after the Aquarium Run to heal my shin splints. So there's a give and take there. Although I haven't done any hard workouts since the Aquarium Run, I also didn't lose as much fitness after the race since I didn't take any time off. Last year I ran 7:16 pace at the Starry Night 10k so my goal for this race was to go out at 7:15 pace for the first half and then pick it up on the way back.
I watched the kids start the fun run and then I headed off for a mile warm up. After Carter finished I planned to take a last minute porta potty break before watching Elise finish but the lines were really long and the announcer started saying we only had a few minutes until the 10k would line up so I decided to skip it. Instead I took Carter over to get his ice cream and then we went out to meet Elise and run back with her. The 10k was set to start at 8:20 and the 5k at 8:35, but the announcer called for all 10k and 5k runners to head to the start together. I was a little later getting over so I had a hard time weaving my way up toward the front. There was some confusion and a little panic for the 5k runners around me who weren't quite ready to start. The race director corrected the announcer and everything was smoothed out. After the confusion he just abruptly sent us on our way without much warning. I was standing next to Jeremy at the start and took off a little faster than him. There were 3 women ahead of me and when I passed the last one to move into first I looked down to see how far into the race we were. I saw we were a half mile in and I was running 7:20 pace. I felt really good and smooth and was pleased I was right around where I wanted to be. A little while later I looked down again and saw 7:40 pace. I panicked at first but then remembered I had the same problem last year where the tree coverage caused my watch to mess up what my current pace was but my mile splits were all accurate with the course markers so I was able to just relax and stay on pace. 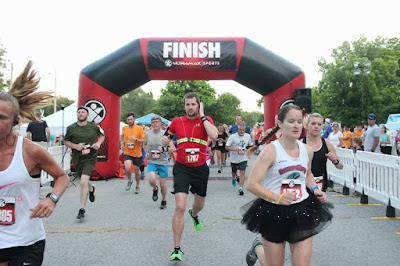 We crossed a bridge about 3/4 of a mile into the race and the volunteers there all gave me high fives. I went through the first mile in 6:48. That was way faster than what I had planned but I didn't let it worry me. I told myself the first mile is always a little fast because it's downhill and I felt comfortable so it was okay. I hadn't run too fast because I was freaking out about the pace my Garmin was showing, I just ran too fast because it felt right. I also reminded myself I had run 7:04 pace for a 12k in April with insanely strong winds. I knew I had lost a lot of speed since the OKC relay because I was still in decent speed shape at that time since it was only a few weeks after the Aquarium Run. I also knew I was capable of running those splits so I felt okay with running a mile at that pace here. A little after the mile mark Jeremy passed me and gapped me pretty significantly by the 2nd mile which I went through in 7:14. I was pleased I had settled into exactly the pace I'd been hoping for and it was nice knowing I had a big cushion from that fast first mile. I was happy to just stay where I was and run consistent 7:15ish miles for the next couple miles.

I kept my eyes ahead and counted that Jeremy was in 4th place overall and I was in 5th. We were both slowly catching the guy running in 3rd place. I went through mile 3 in 7:13 and started calculating how much under pace I was. I knew I was 30 seconds under pace so I could run the last 3 miles in 7:25 pace and still be at 7:15 pace. I felt great at the turn around and slowed a little to drink my water. Shortly after the turn around Jeremy moved into 3rd and I also passed the guy who had been running in 3rd. I checked my overall time at the half-way point and was excited that I might be able to run under 44 minutes if I had a strong second half of the race. I knew the 4th mile was always the hardest for me at this race because there's a slight uphill and the race is so thinned out, I have no one to run with. I felt like I was maintaining pace and was a bit disappointed to see I went through mile 4 in 7:21 which was 6 seconds over goal pace. I didn't feel especially tired at that point, I just slowed that mile mostly due to running alone. I didn't notice the inclines much at all during the race but I did notice all the downhills and would get excited knowing they were helping me speed up. I hadn't noticed running uphill on the way out but during mile 5 I realized I was running a very mild downhill for most of the mile. I could see Jeremy closing the gap on the guy in 2nd and I knew he'd catch him by the time we made it to the 5k turn around where we'd have to start weaving around the 5k runners.

I felt great and was really cruising downhill. I continued to smile and thank all the police officers out on the course. I could see I was closing the gap between me and Jeremy a little bit but I knew I couldn't catch up to him, so I just focused on looking ahead at him and his light up vest. I was hoping the guy he was running with would fall back and I could catch him, I knew Jeremy would just keep speeding up and maybe he'd wear the other guy out. I went through mile 5 in 6:55 and was excited to be back under 7 minute pace. I also knew the last mile is mostly uphill so I'd likely be significantly over 7:00 pace for it. I could feel the incline but it wasn't as bad as last year when I just died during the last mile and really struggled. I passed mom and she cheered for me as I cheered for her which was fun. I tried to kick it in as much as I could but I wasn't gaining on the guy in front of me anymore so I was losing my spirit a little. I tried not to give in and coast but I sure wanted to! I went through mile 6 in 7:08. Then as I turned the corner and saw the finishing lights ahead I really started to kick it in. I ran the last portion of the race in 6:52 pace. I felt like I could have sprinted faster but they had put fresh gravel down in some sections of the trail and the finish was one of them so it was hard to keep your footing. Some of the gravel chunks were really big, more like rock size so it was tricky. As I neared the finish I saw I was going to be over 44 minutes but I knew I'd be well under my time of 45:15 from last summer at this time and I was with a time of 44:14! I was pleased and thought, not a bad time for the off season and on this course. I never run particularly well on this course. It's just a little slower with the gravel and the races here are always small so I end up running mostly alone. 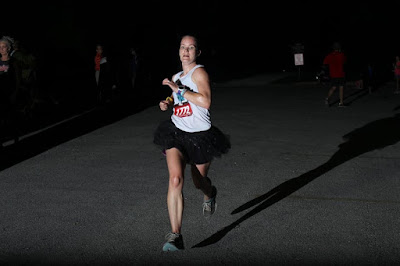 I went into this race feeling like I was in better shape than last year at this time and I was glad to have the validation that I was correct. I figured I'd run faster than last year but was surprised to run almost exactly a minute faster than last year! I'm excited to go into the fall season in good shape and with my long run built up to 15 miles. It will make it easier to work on my speed and focus on getting faster and stronger rather than on building up my long runs like this past fall! After the race I decided to run a 3 mile cool down so I could get in 10 miles for the day. As I was running I got excited thinking about what the fall will hold for me. I also got excited thinking about what an awesome race Jeremy had! He has come a long way since passing out during this race last year to coming in 2nd overall this year! He finished in 43:53 which put him 2nd overall and 1st in his age group. Last August he ran just over 45 minutes so he beat last year's time by a considerable amount! I finished 4th overall and 1st female. In the 5k mom finished in 34:35, winning her age group and dad finished in 24:19, 3rd in his age group and 11 seconds back from 2nd in his age group. Ty took the kids home after the fun run so they wouldn't be in bed quite so late which worked out nicely for us. Thomas was at the lake with friends so he missed out on this race. It was a lot of fun! I'm looking forward to spectating in July and then trying to beat my 44:14 in August! 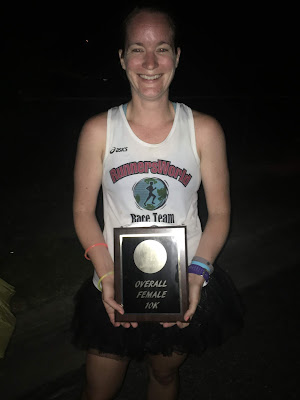 Posted by Liz Runningmomma at 2:37 PM