Mom and dad came into town Friday evening before the race. We were talking about the fun run and I asked Carter if he wanted to run. He said he didn't and then started to cry. I think he may have just been really tired as it was past his bedtime because in the morning when I asked him if he wanted to run, he said yes and acted like I was crazy for asking. Carter initially said he wanted to run by himself like he had at the Sweetheart Run but then as he approached the start he told Opa he wanted him to run with him. They took off running and looked good. Then as the clock started to tick over to 11 minutes I figured Carter should be finishing soon but he never came and never came. Finally after almost 20 minutes I started to worry. I thought even if they'd walked the whole way we should be able to see them coming. I jogged out and found them walking along holding hands. Dad was freezing because it was low 40's with a very strong and very cold wind. He said the portion of the race where we saw Carter run was the only section he ran and they walked the entire rest of the way. He said Carter was really enjoying himself and pointed out all the restaurants on the route he had been to before. They finished in around 21 minutes and then I headed out for a warm up before the 5k. 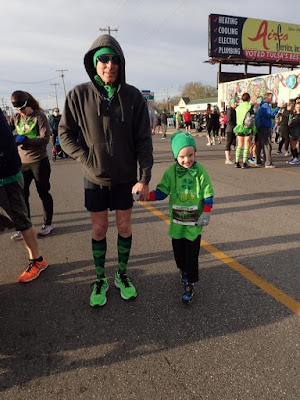 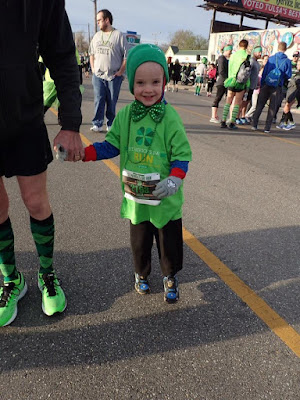 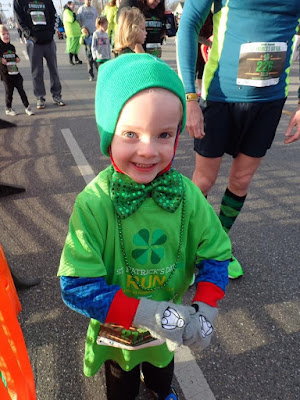 I ran a 2 mile warm up and was so cold. It was definitely colder than I was expecting! The wind was pretty strong and coming from the north so we would run into the wind on the way out. As I ran my warm up I reminded myself that the first mile of this race is always slow for me since you start off running uphill. It takes me a while to get my legs under me. I typically do really well on hills but starting off a race uphill is a struggle for me. With the added difficulty of the wind I was prepared to be disappointed with my first mile split. I figured I'd be able to pick it up a little during the 2nd mile because a portion of the mile would be after the turnaround so we'd be running downhill for part of it. My goal was to break 21 minutes since I'd run a 21:18 at the Sweetheart Run while just running fairly comfortably since I was running a 10k after the 5k. I was hopeful that I might be able to sneak under 20:30 but my speedworkouts lately weren't indicating that was a strong likelihood. My plan was to go out at 6:45 or under for the first mile and attempt to pick it up on the second half of the race so I could be significantly under 21 minutes for my finishing time. I was taking my sweats off to put them under the stroller when Jeremy headed to the start but it was easy to find him in the corral since he was wearing his big green hat. I walked into the corral at the same time as a woman on the Oklahoma Sports and Fitness race team so I followed her up toward the front and stood next to Jeremy. We took off and I felt pretty good. I reminded myself to run conservatively the first mile since I had the hills and the wind to battle. Jeremy was a little ahead of me and I passed him probably half a mile into the race. I went through the first mile in 6:44 and was pleased that I had hit right at my goal. As we neared the turn around I counted women going the other direction who had already turned around. I counted that I was 7th overall and I felt like I had 2 women within striking distance if I could run a strong second half. Jeremy must've been running along right behind me because I went a little wide around the cone for the turn around and he suddenly popped out in front of me. I was shocked and excited to see him. My goal for the 2nd half was to stick with him because he normally runs a really strong last mile. I knew if I could stay with him, I'd be doing well. 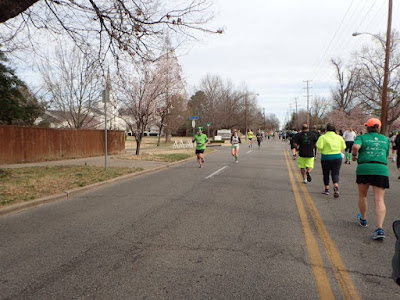 When we ran past mom still going out she cheered for me and I pointed at Jeremy thinking she must not have seen him. She cheered for him immediately after me so I realized she had seen him at the same time she saw me. I went through the 2nd mile in 6:45 and knew it was going to be nearly impossible to break 20:30 with those first 2 mile splits. I also told myself I'd gone out conservatively and had not just a downhill for the last mile but also the wind at my back. I focused on Jeremy and just worked on maintaining the gap with him and not letting him get too far ahead of me. I told myself I'd really kick it in the last half mile like I had last year. But when we hit the last half mile I felt like I was already sprinting and felt like I had sprinted pretty much the entire last mile. I realized I didn't really have another gear to shift into. I kept thinking I was close enough to the woman in front of me, if I had a good kick I could catch her but I just had nothing more to give. I ran mile 3 in 6:16 but don't remember seeing that mile split at all. The wonderful thing about this race is since it's out and back there's never really any added distance. My Garmin always shows 3.11-3.12 miles for this race. I'm used to 5ks being 3.18 or so on my Garmin so I'm always shocked when I come up to the finish at this race and have run a faster time than I expected. I tried to sprint it in but really didn't have much left, running the last segment in 6:00 pace. I was pretty excited when I saw I was going to be super close to 20:30 and tried to kick it in as much as I could to break 20:30. I didn't know it until after I stopped my watch, but I had just sneaked under finishing in 20:27 which my Garmin showed was 6:34 pace. I really feel like on a flat course with no wind (similar to the conditions at my recent fastest 5k at the Jenks 5k) I could have gone under 20 minutes.

Jeremy finished 4 seconds ahead of me in 20:23. He was 39th out of 1,756 overall and 4th out of 91 in his age group. My time of 20:27 put me 41st overall, 7th out of 1,004 females, and 3rd out of 127 in my age group. Last year I was 6th overall and 1st in the same age group so there were definitely some faster ladies in their 30's out there this year! Dad and Thomas ran much of the race together. Thomas is coming back from a few weeks off due to bronchitis and an upper respiratory infection and dad was recently diagnosed with COPD which explains why he has been struggling so much with his running. Thomas finished in 23:57 which put him 157th overall and 15th of 74 in his age group. Dad finished in 24:40, good for 203rd overall and 8th out of 55 in his age group. He said he was probably first place in the COPD category. Ty ran with the kids in the double stroller. We are getting to the point where they are just too darn big to be doing that anymore. I don't know how he did it up that long hill in the first half of the race. He said his lifting definitely helped with that and he had no choice but to run fast on the way back because the stroller went so fast on the downhill. He finished in 32:11 which put him 730th overall, and 67th out of 91 in his age group. Mom finished in 35:13 which put her 933rd overall and 5th out of 33 in her age group. I was extremely pleased with my race. I ran faster than I had been willing to hope based on my speedwork times and I was tickled with how fast I'd run my last mile. Even though I ran an entire 5k at 6:16 pace not that long ago, I was really pleased with just my last mile at that pace with how things have gone recently. Plus it was so much fun to run with Jeremy. I told him it's too bad he's slower since his accident but it sure is nice for me because I get to run with him! The best part of all was that this was the first race in over a year I was able to run with no glute or hamstring pain. My hamstring was sore after the race but recovered well and I was able to run 9 miles the following day with no issues! I'm excited for the half marathon but I'm almost more excited for a summer of easy running to fully heal my glute and hamstring so I can train for a PR marathon in the fall! 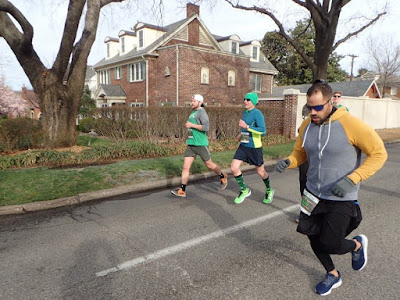 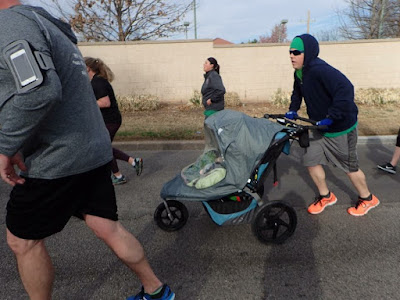 I threw my gloves off right after the turn around so I jogged a cool down back out to pick them up after finishing. I was really surprised with how good my legs felt after the race. For a while now I feel like it takes me the first mile or 2 of a 5k to get my legs going and then the last mile of the race I'm able to really hammer away. Maybe I need to do something different for a warm up to get my legs ready for faster racing or something. I was on a high from running faster than I expected and from running with Jeremy. There's just something about racing with Jeremy that makes the whole experience more fun. I was pretty jacked to get back and tell everyone what a fast last mile Jeremy had run! His watch showed a 6:12 last mile! After the awards ceremony we were off to IHOP for breakfast and then headed home to put Elise down for a nap. Mom and dad took Carter to a friend's birthday party while Ty and I set up for Elise's birthday party. It was a very fun and busy day and started off right with a run! I've never had a particularly strong race on this course and was hoping for this year to be my year. Now I'm hoping next year I'll have an awesome race on this course but I do feel like this year was the strongest race I've ever had on this course based on what my training showed I could run. I've been fairly consistent these last few years, running a 20:34 in 2016, a 20:15 last year, and a 20:27 this year. I also have a race recap from 2014 here and we ran a different St. Patrick's Day 5k in 2013 after Carter was born, read about it here. 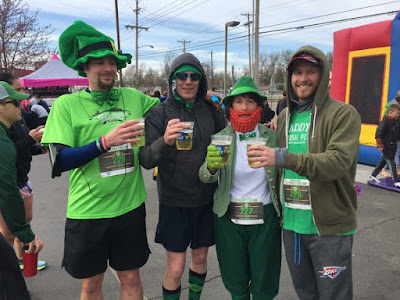 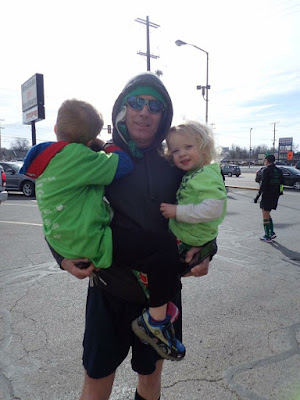 Posted by Liz Runningmomma at 7:39 PM