Carter was so excited to go swimming he was up before 7 am digging through his bag looking for a swimsuit. I got up and helped him find his suit. Then I packed up our stuff and started packing up the kids' buddies and blankets. We've lost a buddy at a hotel before so this time as I took each buddy out of the bag (the kids packed them by themselves), I wrote down each one so in the morning as I repacked I checked each one off the list as I packed it to make sure we didn't lose any. Elise finally woke up a little before 8. Carter and I were already in our suits so I helped her put hers on and then we headed to breakfast. We were so excited it was Elise's birthday and she loved it each time I called her the birthday girl. Elise went all out at breakfast trying various things and I let her have whatever she wanted since it was her birthday! She had tried to talk me into letting her have mac and cheese for breakfast but I drew the line there. She wanted to try cranberry juice like Carter but decided she wanted water instead. Sister loves her water! The kids were thrilled when we made it to the pool and found the friend we'd made swimming the night before. The pool was again pretty cold but didn't seem as cold as the night before, maybe because I was expecting it to be really cold! Carter had to potty so we all got out and headed back to the room for him to use the restroom. It made us pretty cold but made the water feel warmer when we got back in. Then he had to go again later. That time he had to poop and while he was sitting on the potty he started crying that he was too cold to swim anymore. Elise said she wanted to go back to swim so I told Carter we would go back since it was Elise's birthday, she got to pick. After waiting even longer while Carter was still going to the bathroom Elise decided she wanted to take a warm bath rather than go back to swim. After their bath I got Elise all dressed in her birthday gear to take some pictures. She wore her crown for pictures but didn't want to wear it anymore when we were done. Then as I was loading up the luggage cart she ripped off her birthday ribbon. 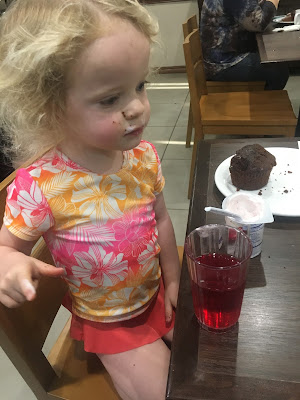 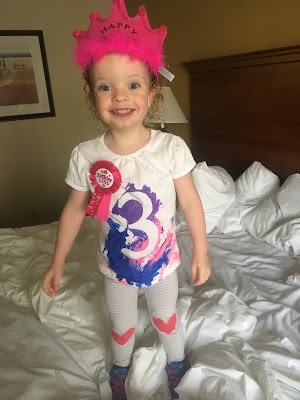 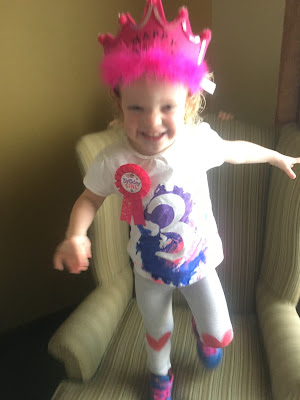 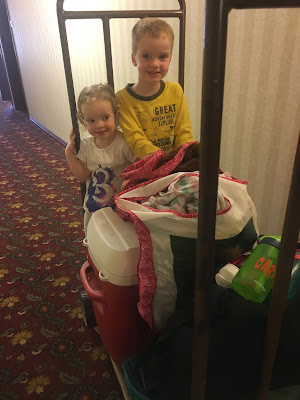 We got the car all loaded up and then headed to the Sam Noble Museum. We made it there just after they opened so our timing was again perfect. Since it was spring break they had some special activities going on. We saw a gorilla just inside the entrance so I asked the kids to take a picture for Opa. The university's mascot where he works is a gorilla. Elise was too scared to stand by it but Carter did. They had a touch and feel area set up and the kids enjoyed that. Elise kept poking where the stuffed bird's eyes should have been, no surprises there. We enjoyed the first room and then Carter wanted to go upstairs. We got to see a prairie area. Elise's favorite part was an interactive touch screen computer book where you could see the different animals in the scene and click to listen to the sounds they make. I helped her find them in the scene after looking at them in the book. There was also a cave you could look at and Carter was excited to see troglobites. Then from the second floor Carter could see the apatosaurus so he wanted to go back down to see it. They had a pentaceratops whose 10.5 foot skull holds the Guiness World Record for the largest skull ever found. I didn't even know a pentaceratops existed and was pretty amazed by it. While we were down there Carter saw people riding a glass sided elevator up to the 2nd floor and it looked like you could get a really good view of the apatosaurus from there. Carter wanted to make the mask craft they had set out and then we explored a little more. Elise wanted a snack so we went out to the front to eat oranges as you weren't allowed to have food in the museum. While we were out there we saw an insect petting zoo set up. It was the same one we'd seen once at the Philbrook Museum and Carter had loved. We went in and Carter just loved the Possum Beetle. He kept showing people how it pretended to be dead which was funny! Before leaving we went in to ride the elevator. We saw that the elevators were named dinovators which I thought was cute. We rode the dinovator that said eye to eye and were right at eye level of the dinosaur's skull. Those are the pictures I got so the apatosaurus looks small but that was taken from the 2nd floor. We also rode the belly of the beast dinovator. Then we went back in to see the apatosaurus once more before leaving. I loved reading about the baby apatosaurus, it was fascinating! I couldn't believe how small it was! We got to hold a toe fossil and it was so heavy! In the gift shop the kids each picked a dinosaur digging kit. Since they were just $3.50 a piece and we'd saved so much money by not eating out I let them get them. Carter was so excited about it, he wanted to do it right outside the museum so we dug on them for a while before leaving. 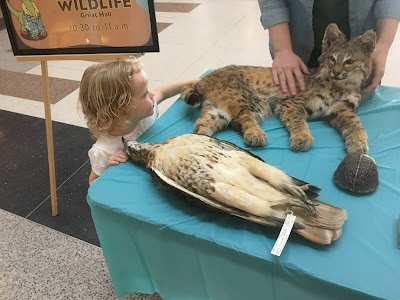 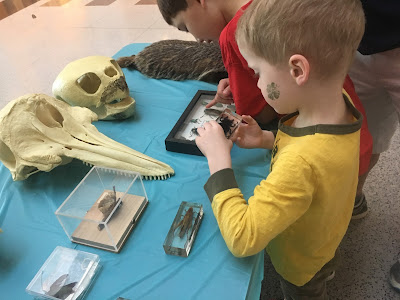 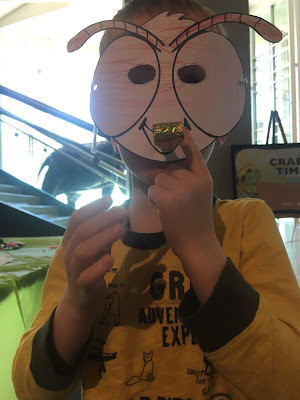 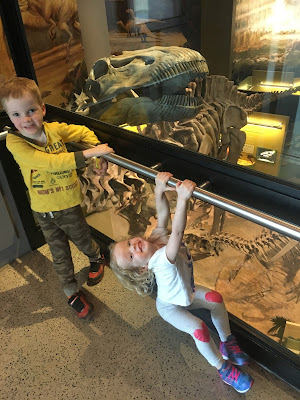 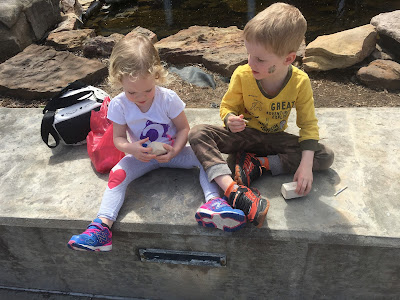 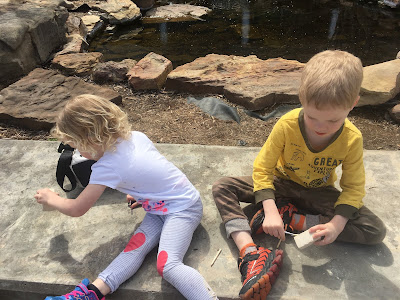 We once again ate lunchables in the car as we drove. We went to an art museum I'd found online before our trip which was free but all the parking was permit parking on OU's campus. I didn't want to deal with paying to park so we just headed to Lake Thunderbird State Park instead of going to the museum. We made it to the visitor's center and got out to get a map. I knew there was a nature center and I thought it would be fun to visit. As I was looking at the map I turned to find Elise holding onto a pole while squatting down with her pants around her ankles going potty on the cement. I told her she should have told me she needed to potty as there was a restroom right inside the building. I was a little embarrassed she had pottied there but at least she wasn't visible from inside the visitor's center. We used the restroom, picked up a sticker for our passport, and then got directions to the playground and nature center which happened to be on the other side of the lake. As the kids played on the playground I read through the state park passport and realized for every 6 state parks you visit you get to send in a page to get a special state park medallion. I was bummed that we had visited 2 state parks the day before and had only picked up one sticker since I was planning on the kids sharing a passport. Now that I know how they work I want to get a second passport for Elise. I'm thinking we'll for sure visit Gloss Mountain State Park again because we'll drive past it to get to a couple state parks we haven't been to. I'm not sure if we'll go to Alabaster Caverns State Park again but they do camping inside the cave so we may go ahead and visit again to do that. Carter made some friends on the playground which is pretty typical for him. He talked his friends into going on a hike with us and we went down to a path that lead to the edge of the lake where there was sand. The kids enjoyed playing in the sand. It was getting close to 4:00 so I gave them about 5 more minutes to play in the sand after our hike and then we headed out. 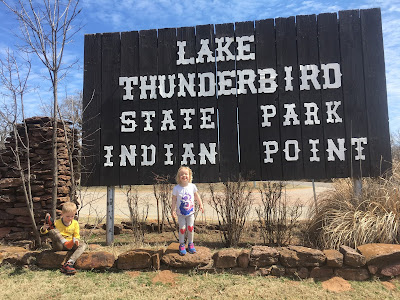 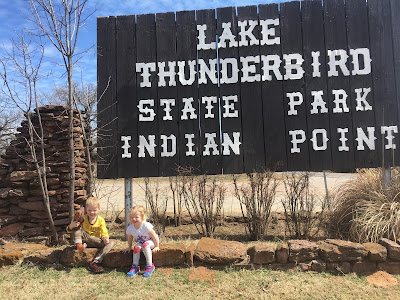 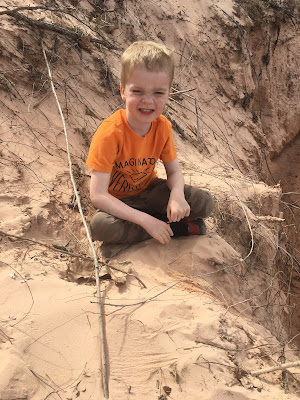 In the car I put Carter's tablet by him again with the same instructions as the day before. Elise kept talking and Carter told Elise to be quiet because he wanted to sleep. He kept pretending to be asleep to get her to be quiet. I thought he must be tired and may take a nap on the way home. Then I realized he was just trying to trick Elise into falling asleep because the moment she was asleep his eyes popped open and he grabbed his tablet, such a tricky boy! Elise napped the entire way back to Tulsa and snuggled with her Owlette doll Oma and Opa got her for her birthday. When we got home we celebrated Elise's birthday with daddy. Oma and Opa had come to help Thomas work on his house since Opa was on spring break so they came over with Jeremy and Thomas to celebrate too. Both kids slept in some the next day because they were worn out from our trip! It was a wonderful trip and we had so much fun. I got so excited about the state park passport I sat down and found all the state parks on our Oklahoma map and circled them. I listed out state parks that are close together so we could visit them during the same trip and I'm researching each one and making notes about the features of each park so we know the best time to visit. Some will be best for summertime since the main attraction is a lake with swimming opportunities. I already know which one we will visit next on a day trip. I also marked different waterfalls to visit since Elise enjoys waterfalls so much. I'm already looking forward to our next state park visit! 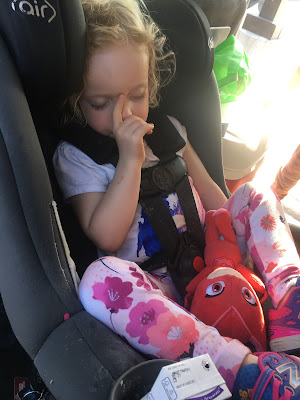 Posted by Liz Runningmomma at 11:23 AM