We signed Carter up for soccer this spring and he was so excited. His team is mostly boys from his class at school. One of the moms messaged me and asked if Carter would like to play because he's friends with her son. It was a little more expensive than we would have liked, but it's worth it to play on a team with all his friends! They had their first practice on Tuesday and Carter spent most of the practice running around the field laughing. I could tell he was going to LOVE soccer! He favorite thing to do was get the ball and take off running. He's good enough at dribbling he could get in front of the pack chasing him and just go. The only problem was that he'd take off out of bounds, running away from the field. When we got to the soccer fields on Saturday morning, I showed him the white lines and explained to him how the ball had to stay inside the white lines otherwise it was out of bounds and the other team would get the ball. He did really well during the game keeping it in bounds and not running off out of bounds like he had at practice. He was a bit hesitant at first, mostly just running around and bouncing a bit because he was nervous about running up to someone who had the ball. Once he got the hang of it he'd actually run up to someone with the ball and try to take it from them. 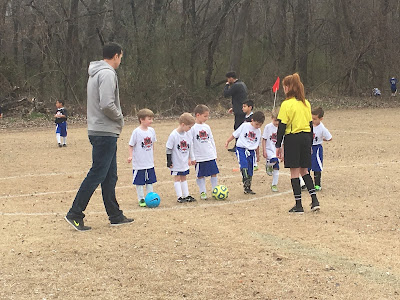 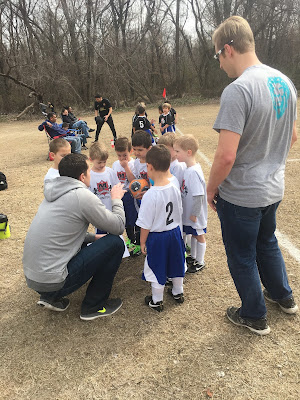 The way his coaches did it, one group of 4 kids played the first quarter, then one group played the middle 2 quarters, and the first group came back in for the last quarter. Carter was in the group of kids who played 2 quarters back to back in the middle. When we left for the games it was pretty chilly so Carter wore a long sleeve under his jersey. By the time he played it was pretty hot so at halftime I helped him take his long sleeve off. Carter stayed over with his team and Elise ran over to give him a hug, it was so cute! Then at one point later on she wanted to go over and give him a kiss. I could tell Carter and his teammates were getting tired by the end of the 2nd quarter they had played. Carter was running while holding his head so I got worried and called him over to me. I thought he'd bonked heads with someone and I'd missed it. He said he was just really tired and needed a break so I had him go ask his coach if he could take a break. A little while later one of the other players just walked off the field without saying anything because he was so tired. It was hilarious! I really wasn't sure how long the game would be and figured it wouldn't be too long but it ended up lasting about an hour. I heard someone say the quarters were 10 minutes long each. Carter had so much fun! He immediately started asking when his next game is. I'm a little bummed because they have 2 weeks off with no games and then the first week back is the weekend of Easter so we'll be out of town and he'll miss the game. It figures the weekends we're in town, there aren't games but when we are out of town there will be one! Carter was so tired from the game he almost fell asleep in the car on the way home!
Funny side story about the game, I got up and went for a run Saturday morning. When I got home Ty and Carter were turning the house upside down searching for one of Carter's shin guards that was missing. I assumed they had checked where we keep his shin guards so I figured Elise must've gotten ahold of it and put it somewhere weird so I started helping them search for it. It turned out it was in his shoe bin where it was supposed to be the whole time. They just thought it was missing because his other shin guard and cleats were laying in the middle of his bedroom floor. We now keep all his soccer things in a drawstring bag hanging up so we don't have to search for anything when it's time for soccer!

Posted by Liz Runningmomma at 11:36 AM