I wrote about running the 5k/10k double at the Sweetheart Run here. While I absolutely loved running both races and would like to do it again in the future, the only downside was that I missed seeing Carter run the fun run. The 10k started at 8:30 and the fun run was at 8:35 so there was no way for me to see even part of his race. When my mom was signing everyone up she asked if the kids would like to do the fun run. Carter said he'd like to run but Elise said she didn't want to because her arms were tired. I thought that was just hilarious. Since I didn't see Carter run the race, I asked Ty to write a little race recap for me. It's super late because I kept forgetting to remind him to write it when he was actually home and able to do it. Here's what he had to say about the race: 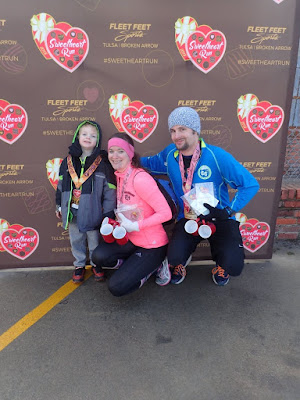 After seeing Mommy and Uncie J start the 10k, we had a few minutes before the start of the fun run. Luckily we were near the start and Carter already had his bib on. The only think left to figure out was to decide if he was going to wear his coat or not. He reluctantly gave up his winter coat to just wear a light jacket and went to stand in the chute. He told everyone he wanted to run by himself so we let him.

He stood there for about 4 minutes before the start gun went off and then he ran straight to me to ask for his coat! He got cold standing, waiting for the race to start. We quickly put on his coat and he was off again. I passed Elise off to Dave and took off across a large parking lot that would allow me to cut the course and see Carter after only about 300 yards.

I got to my spot right before he did and he passed me running with a smile on his face as I cheered him on. Once he passed me, I back tracked to the start and then ran the course in reverse so that I could see him at the last turn. Again, we got to my envisioned spot at the same time and I was able to cheer him on again as he rounded that last corner.

At this point I had to kind of trot behind him (but off to the side on the side walk) since we were both now headed to the finish line. He looked behind himself to see what I was doing a couple of times but he kept on moving. I think he was trying to decide if he thought I was running the race with him or if he was still doing it on his own. Eventually he settled back into his pace and didn't look for me again. 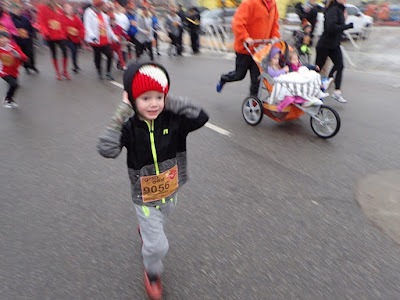 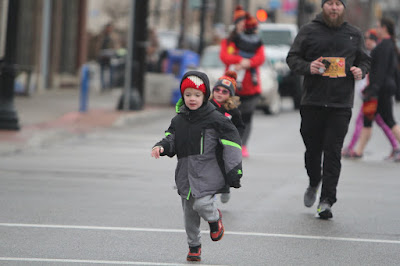 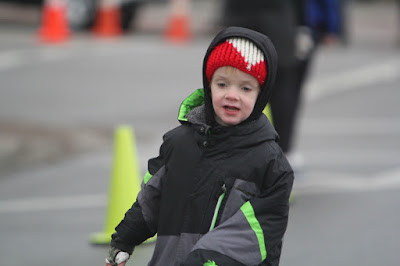 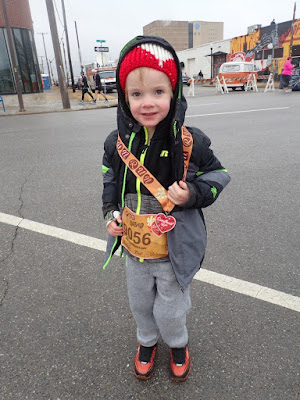 Posted by Liz Runningmomma at 7:18 PM