We are getting so close!  Only one more month until we reach full term!  I'm so excited!!!!  My goal this entire time has been to make it to 37 weeks.  Each week closer we get I get more and more excited.  I'm having a decent amount of Braxton Hicks contractions and I can tell little miss is lower, but nothing compared to Carter at this point.  That makes me feel like we are definitely going to make it longer and I hope I'm right! 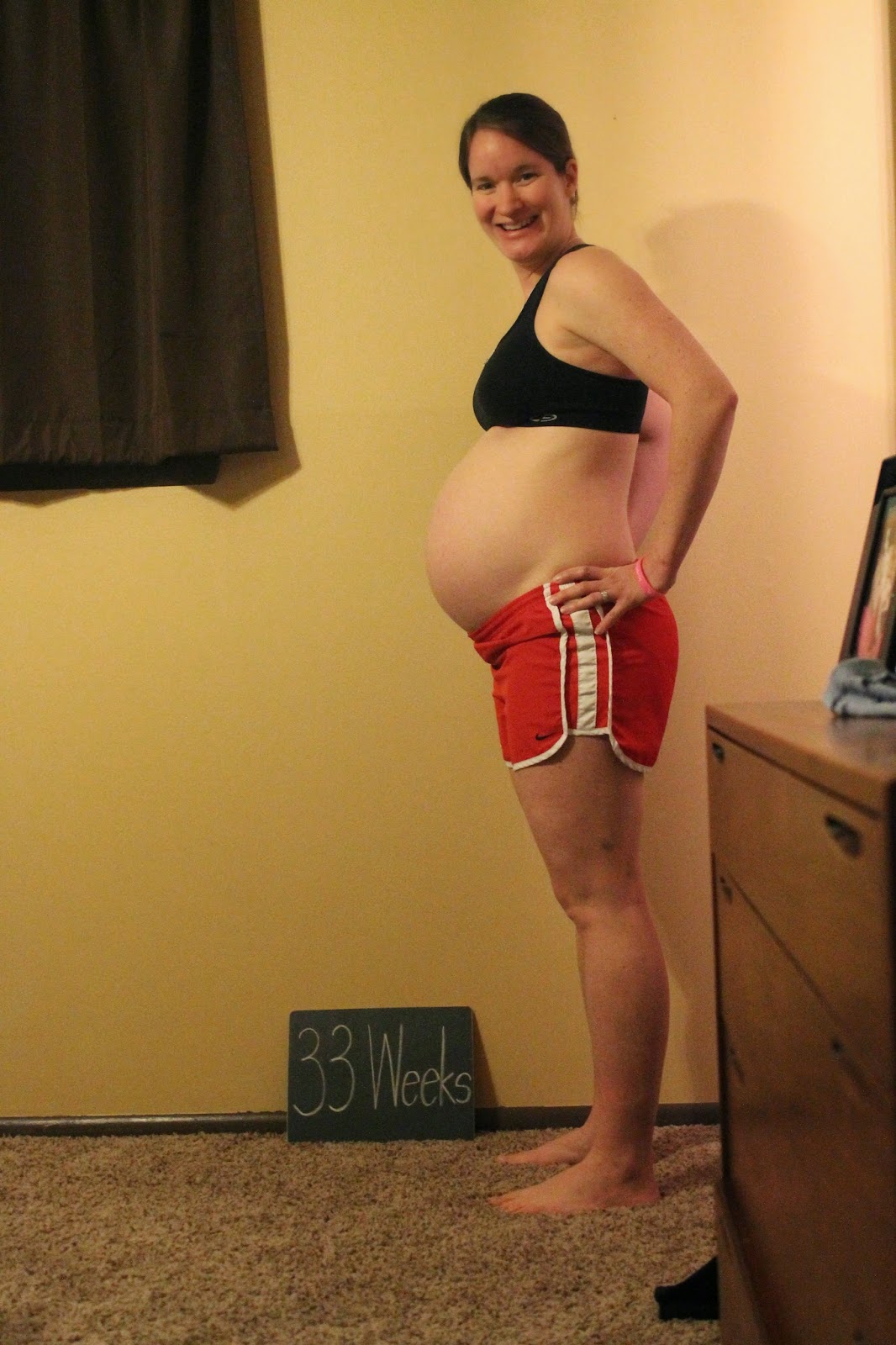 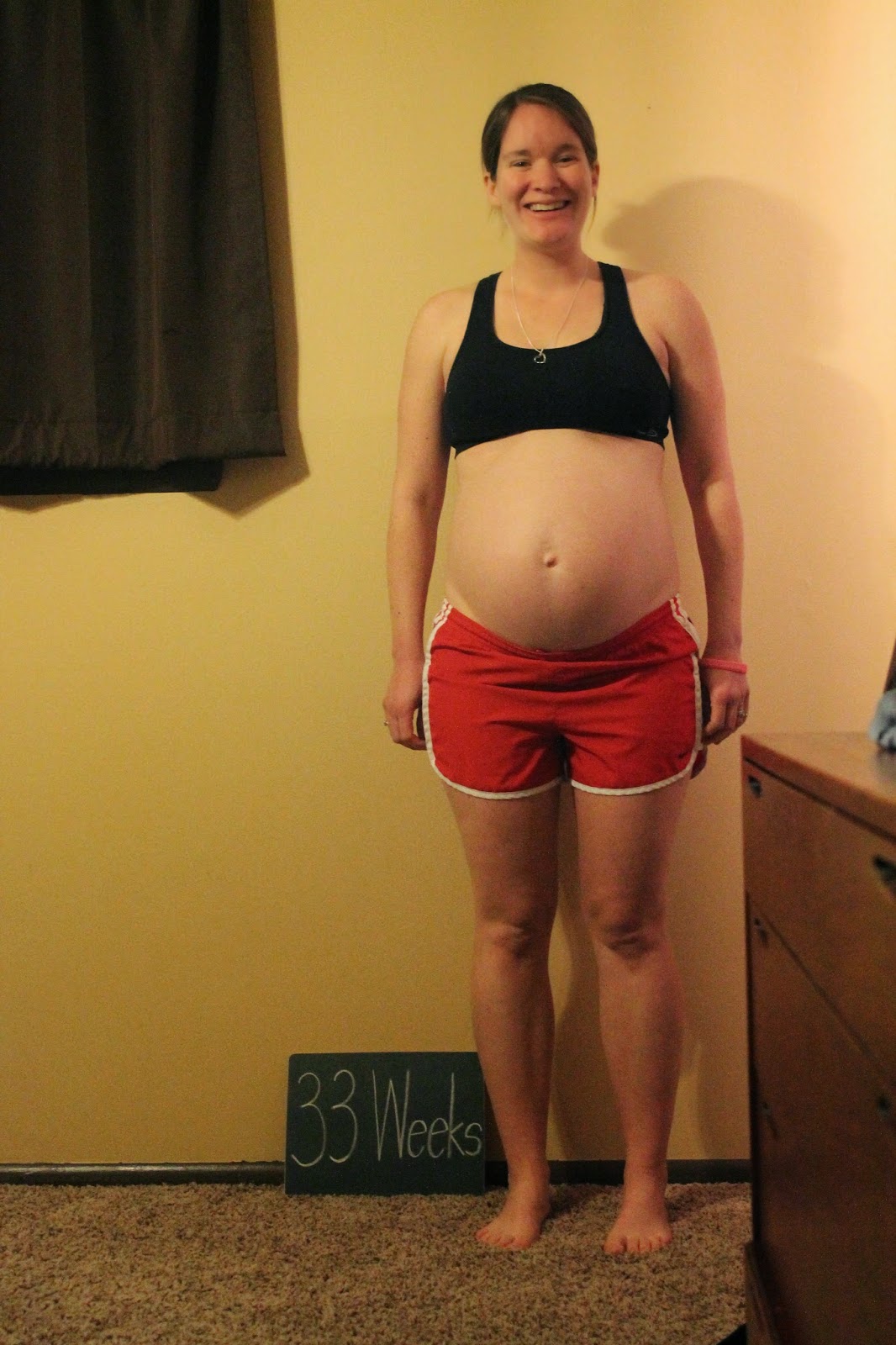 Baby's Size: Sweet girl should be a little over 4 pounds and over 17 inches.  Since she was already over 4 pounds last week I'd say she's a bit bigger than that right now.

Weight Gain:  Taking the week off again this week and it's so nice, especially since we celebrated Valentine's Day with some candy and cake!

Maternity Clothes: It finally snowed on Monday.  I've been waiting months for some snow!  I got so excited I forgot I was pregnant for long enough to put on my snow suit.  When I went to zip it up and couldn't even get the zipper started I was reminded of my current 8 month pregnant state.  I ended up wearing the pants anyway and just not zipping them because I had a long coat to wear over them. 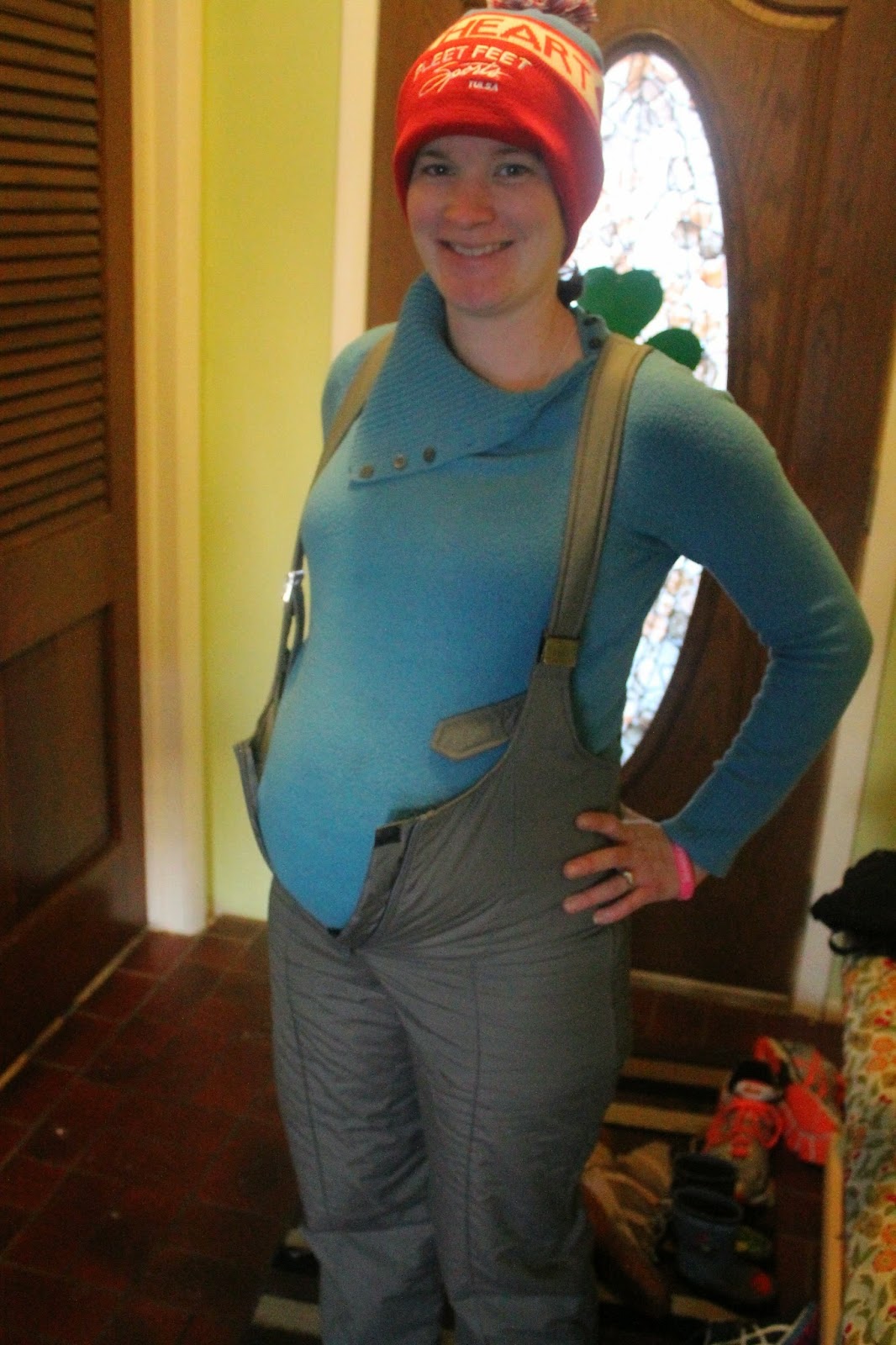 Sleep: I haven't been nearly as tired this week.  Hopefully that means Elise was going through a growth spurt last week and that's why she measured 79th percentile at our appointment!  Unfortunately since I haven't been as tired I haven't been sleeping nearly as hard.  I wake up with Ty's alarm and really struggle to fall back asleep.  I also have a hard time falling asleep at night, especially if I take a nap during the day.  But then if I don't take a nap during the day I struggle to stay up after Carter goes to bed and I like to have alone time with Ty.  I skipped naps a few days, took little 20-30 minute power naps a couple days, and napped for an hour in the beginning of the week.  I'm also waking up for restroom breaks 4 times at night which doesn't help in the sleep department.

Symptoms: My hips have been much more sore this week.  I also feel like I constantly need to pee and I swear I go like every 30 minutes!  Each time I need to go to the bathroom I feel like I'm about to pee my pants.  That makes me think sister has dropped a little bit lower this week.  Yesterday I waited too long to go to the bathroom.  Ty kept saying something that he knows gets me going.  I kept laughing and told him to stop because I thought I could make it to the bathroom without having an accident.  As I was running off Carter yelled, "Mommy poopeet!"  I lost it and didn't make it to the bathroom.  Carter was shocked and kept running up and down the hallway yelling, "Mommy potty, mommy potty!"  Earlier in the week I went up to my old work to visit my previous co-workers and they mentioned I don't look as big as I did with Carter.  I think it's because I've grown more side to side with Elise than I did with Carter.  With him my belly was all straight out front.  My belly button is still half in, half out.  The top half is popping out and the bottom half is still in.  It's hard enough to bend over that I've started taking baths with Carter so I don't have to lean into the tub.

Running: I hit 12 miles for my weekly mileage this week.  I still ran 2 miles every day, but we ran the Sweetheart 5k on Saturday morning.  I ran a half-mile warm up and cool down before the race so I got 4 miles in.  I was able to run comfortably and felt good throughout the race.  I was a little bit worried because sometimes 2 miles is hard to get in so I wasn't sure how a 3 mile run would feel.  It definitely helped that it was in the morning so I didn't feel like I was going to pee the entire time I was running.  I finished in 25:41 which was good for 5th in my age group.

Food Cravings: I've been all about avocado and guacamole this week.  We make our own guacamole just smashing avocados and then adding seasoning and sour cream.  I ended up planning it as a side with 2 of our meals last week and it's made it onto the menu twice more this week.  I've also been loving broccoli dipped in ranch.  I could eat so much of it because it's so delicious, but it makes me burp a lot and feel a little bit of reflux.

Movement: She's still moving around all the time and I'm loving it!  She's actually been moving during more times of day than she had been.  Typically she just moved around when I laid down in bed at night, when I laid in bed before getting up in the morning, and when I sat down during Carter's naptime.  This week she moved at other random times, sometimes even when I was walking around.  She also moved around quite a bit while I was eating.  I'm going to miss it when she runs out of room to move around as much.

Best Moment of the Week: Valentine's Day!!!!  I love Valentine's Day.  It is definitely my favorite holiday.  My whole family was in town and we all started our morning with the Sweetheart Run which I ran as part of a two-person team with my sweetie, Ty!  While Carter napped everyone took off to run different errands and work on chores.  When he woke up it was just me and him so we got to do some fun Valentine's Day activities as well as snuggle.  He is my sweetest, little Valentine!

Currently Loving: Saturday I re-organized Ty and my closet.  I went through and found my nursing bras and nursing tank tops and put them in the dirty clothes to wash.  Sunday morning I took down all the Valentine's Day decorations.  That afternoon Ty put them away in the attack and got down the car seat, bouncer, St. Patty's day decorations, and Easter decorations while he was up there.  I took apart the bouncer while he took apart the car seat.  Then I washed an cleaned everything to get it ready for Elise.  It's so exciting that we're getting to the point where we need to get these things done.  Ty plans to install the car seat bases in our cars next weekend.  We are getting so close to meeting our girl!  When my mom came she brought elephants she crocheted to replace the monkeys on our crib mobile.  They are adorable!  Then Ty hung things in Carter's big boy room that we had taken down from the nursery to change it over for Elise.  I feel like things are really coming together and I'm getting all my "Before Baby Arrives" to-do's marked off the list!  All we have left is to find a lamp shade, add the 2nd window curtains, raise the crib and put the crib skirt on, re-organize the closet and night stand in the nursery, install the car seat bases, and eventually closer to time back our hospital bag!
Miss Anything: Nope!

What Big Brother is Up to This Week: We had a very busy week with something going on almost every day.  Carter enjoyed our Valentine's Day themed playdate with Landon on Thursday and then we met up with him again on Friday at the Children's Museum.  He was so tired after playing at the Children's Museum he cried during lunch and had a hard time eating because he wanted to go to sleep.  Then he napped for 3 and a half hours.  My parents came to visit for the weekend which is always so exciting for Carter.  He had been asking for them throughout the week and I'd tell him they were coming on Friday evening right after his bathtime.  So on Friday he looked at me and said, "Oma, Opa, laler?"  I told him, "Yes, they are coming later."  He enjoyed another fun run and an awesome Valentine's Day which I will post more about later.  Carter also likes to push on my belly to get Elise to kiss back.  When she does he kisses my belly.  It is the sweetest!  During our bumpdate pictures Carter pointed to the wall beside him and asked for Uncie Taco.  Thomas wasn't here and I'm sure he was glad!  Week 33 Bumpdate with Carter. 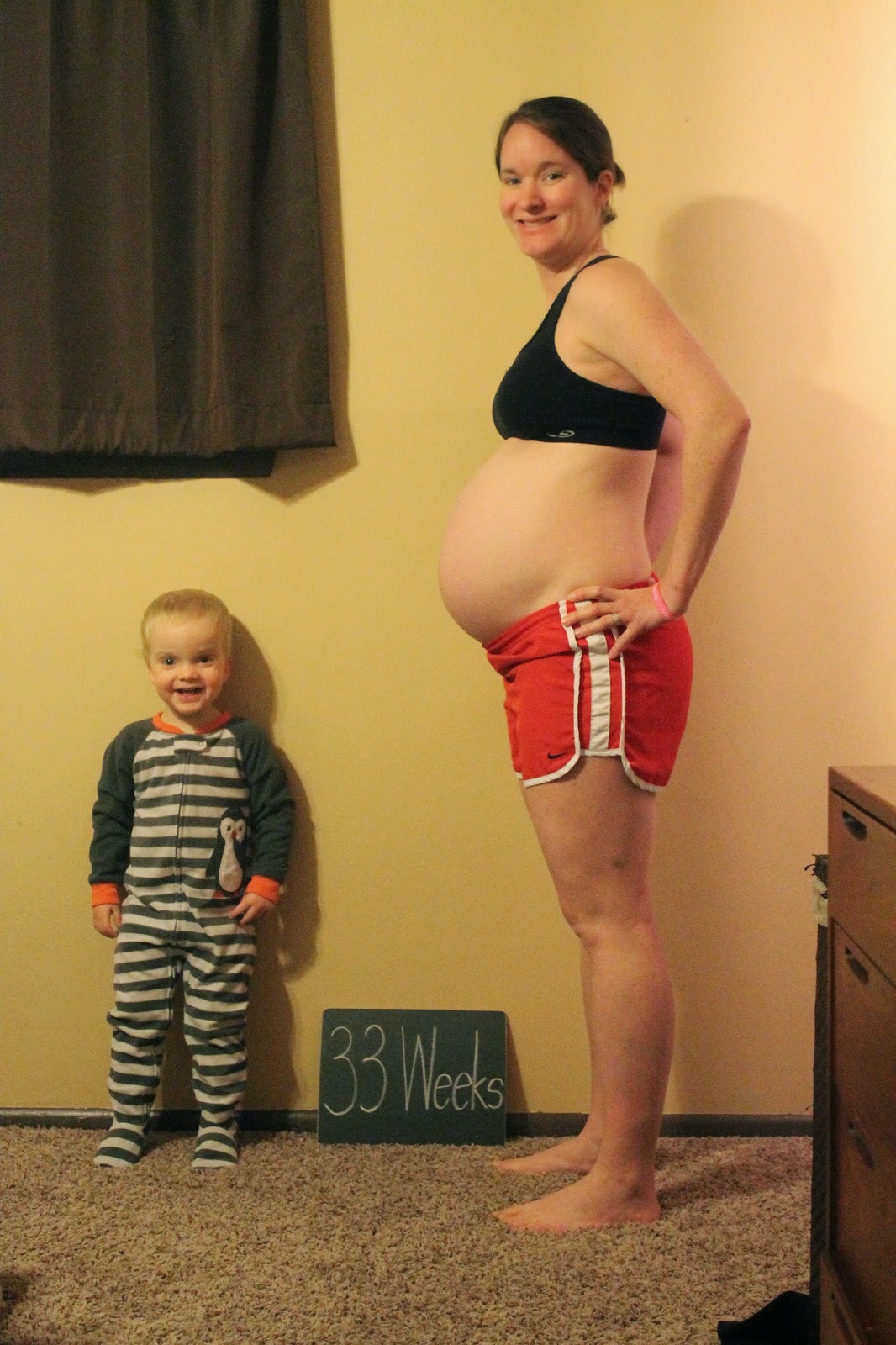 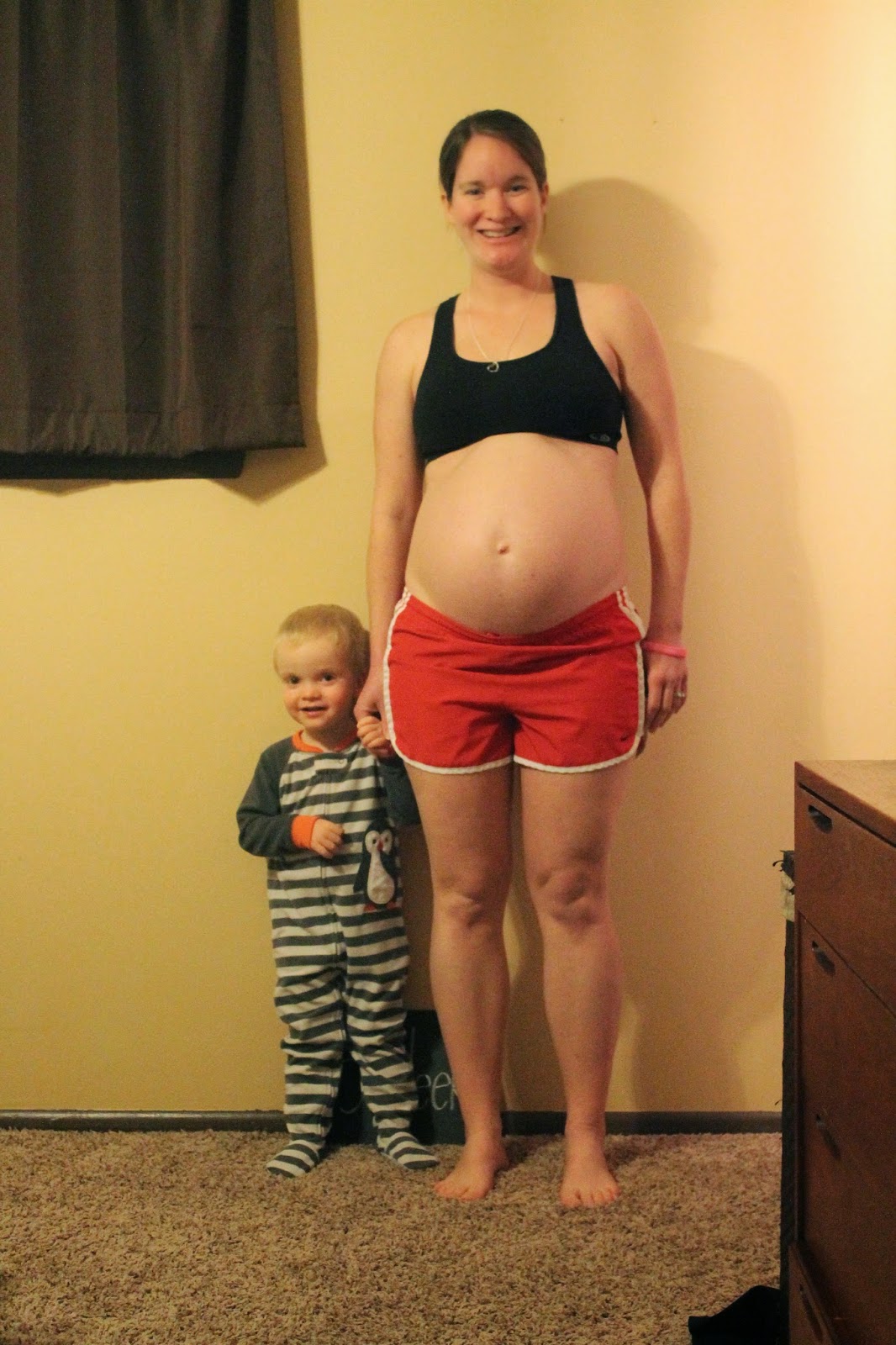 Posted by Liz Runningmomma at 6:40 PM