The Sweetheart Run and Our Valentine's Day Fun

We started our Valentine's Day celebrations early with a special treat on Friday evening.  Carter opened a card from his Gma (or as he calls her, Neema) and Gpa.  They had sent him $5 in his card so we decided to go out for ice cream after dinner.  I read Carter all the choices and he told me he wanted cake so we got him a birthday cake ice cream cone which much to his delight was bright blue!  Ty and I each got single scoop sundaes and we paid separately for ours.  Carter was so excited to hand his $5 to the cashier.  I saved his change in a separate section of my wallet so he could pick out a toy the next time we went to the store.  Carter made friends with lots of people while we were there.  They thought he was the cutest thing! 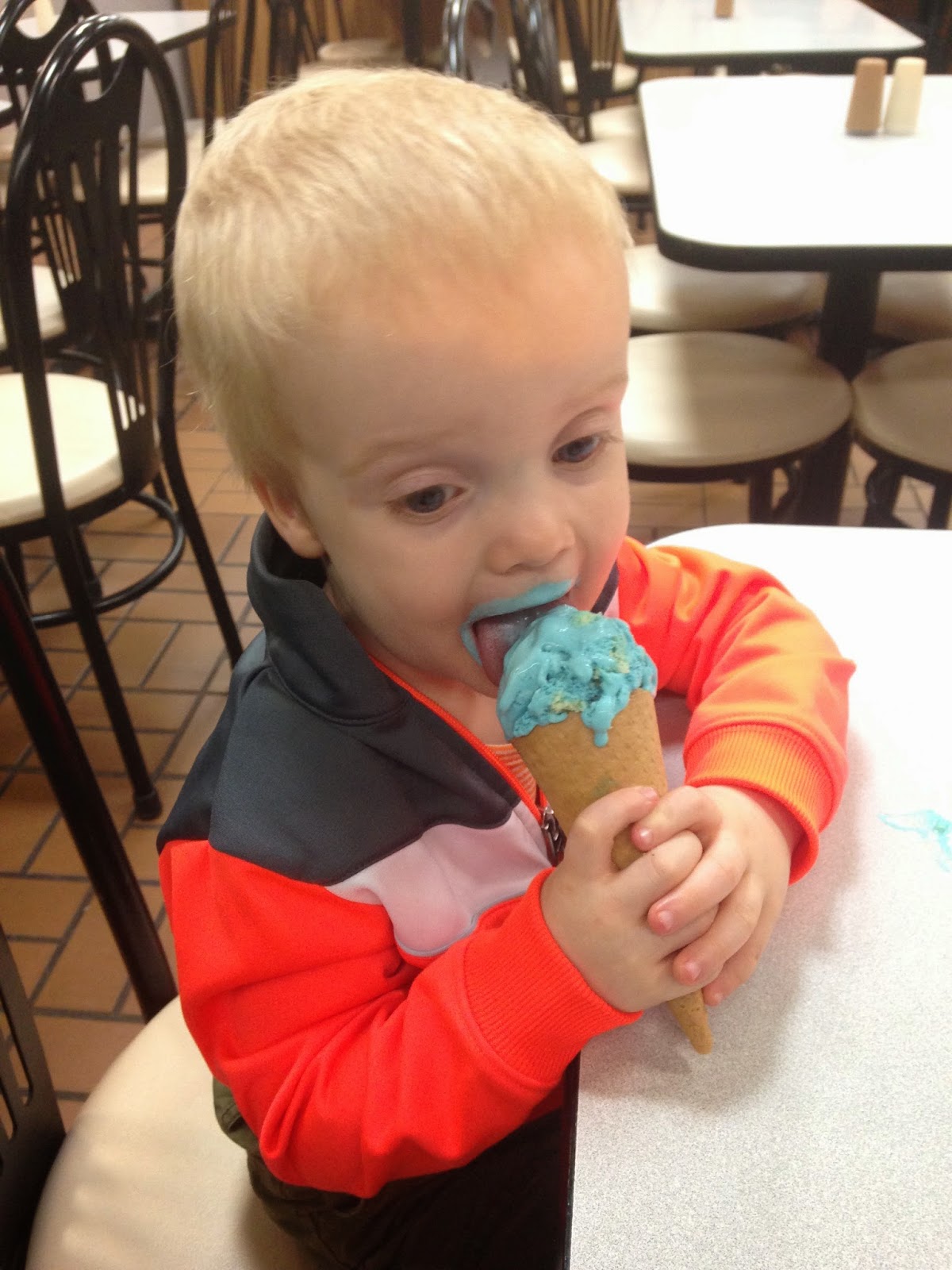 Saturday morning started early for us with Carter waking at 6:30 am.  We all got dressed in warm gear for the Sweetheart Run 5k which was to start at 7:45 am.  The temperature was actually fairly warm for that early in the morning at 36 degrees.  Going into the race I knew I had run a 25:56 when I was 30 weeks pregnant with Carter.  I figured since I have been able to run so much faster this time around that even though I would be further along in the pregnancy, I could probably run about the same time.  My goal was to go out in what felt comfortable and see if I could hit 8-8:30 pace.  I also told Ty the race may not go very well because I'd had a few rough days of running during the week.

Ty and I started the race together and I told him I'd either take off if I was feeling good or run with him.  We probably started off a bit farther back than we should have and spent the first section of the race weaving through runners.  I wasn't able to get under 9:00 pace for quite a while due to all of the congestion.  Once I got going I was feeling really good and I hit the first mile in 8:10.  My goal for the 2nd mile was to stay under 8:30 if I could.  I was feeling comfortable pace-wise, but my belly was feeling heavy and I could feel my calves tightening as I ran so I slowed down and went through the 2nd mile in 8:23.  Before I hit the turn around I got to see Jeremy and dad go by which was fun.  Once I hit the turn I watched for Ty and mom.  It was really fun to see mom because she cheered loudly for me and Elise.  Going into the last mile I was feeling great.  My belly didn't feel as heavy and my calves were loosening up.  I started to pick up the pace a little bit at a time and went through the 3rd mile in 8:07.  With about a quarter of a mile to go we ran up a hill and turned a corner where we could see the finish line in the distance.  Two men passed me as we went up the hill.  After turning the corner I decided to pick up the pace a little bit to see if I could catch them.  I ended up passing them both and running the last 0.15 of a mile (the course was either a smidgeon long or I added distance weaving around people at the start) in 6:46 pace!

Carter was signed up for the fun run which started 50 minutes after the 5k.  We had some time before his race so I jogged a cool down and then we all stood around drinking water and talking.  Mom, dad, Jeremy, and I decided to run and walk the race with Carter so we all headed over to the start area when it was time.  Ty and Thomas opted to stay back to spectate.  At the start of the race Carter was really excited and took off running.  Then he got upset, started crying, and wanted me to carry him.  With the long wait between the 5k and the mile, waking up earlier than usual, and not having a snack he was a bit tired and hungry.  He ended up wanting to be carried most of the race, but did run a couple different sections.  By the end he was over it and wanted his Opa to carry him across the finish line.  He was very excited about pancakes though and we headed straight to the post race party.  They had little paper trays with 2 pancakes and a container of syrup already set up and ready.  We grabbed them and headed to find a place to sit.  Carter loved his pancakes and even wanted more.  By the time we left he had syrup on his race bib and all down his coat. 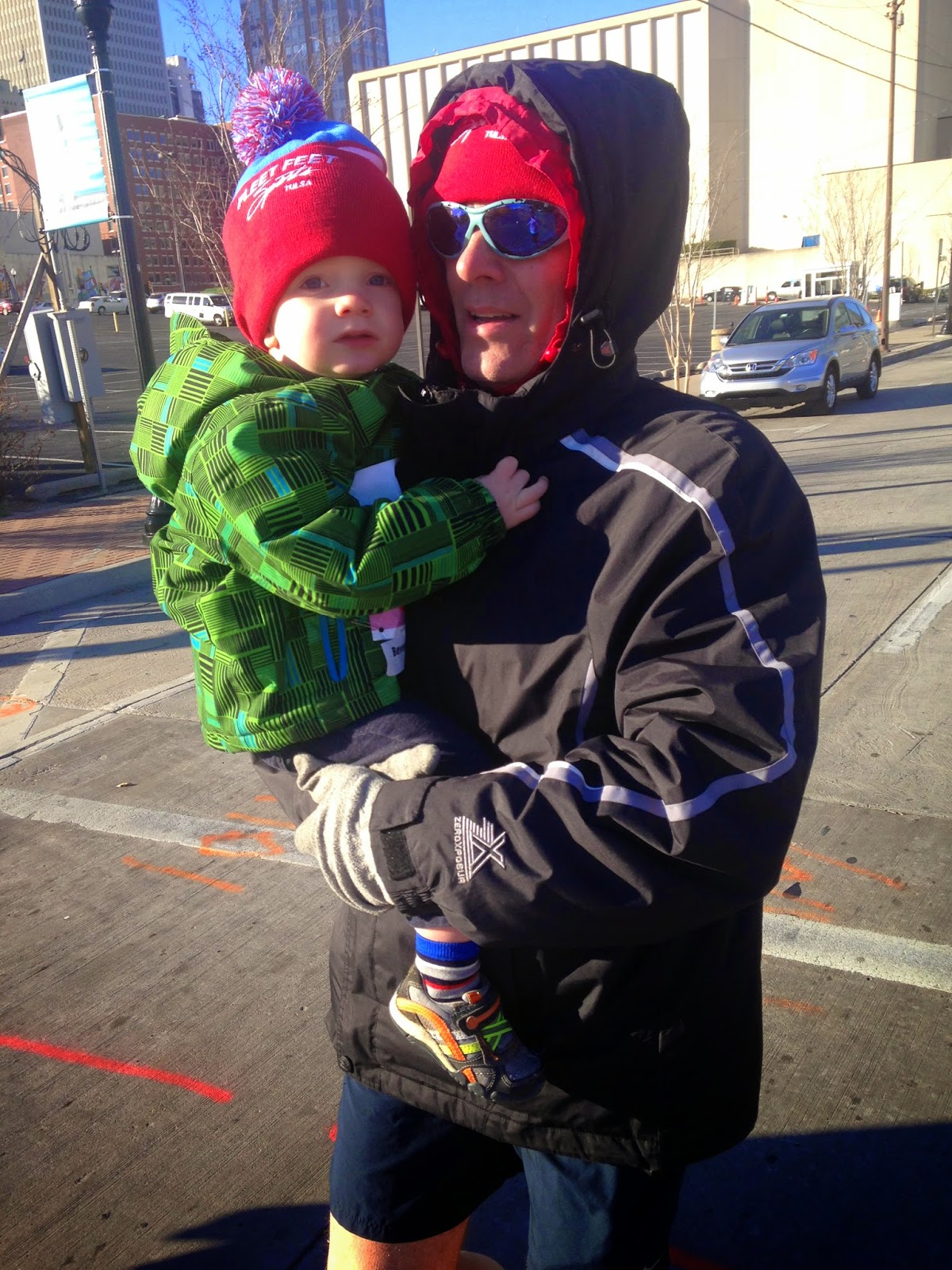 Back at home I showered while Carter played in the backyard with Oma and Opa.  Then I went outside to play while Opa showered and Oma took a nap laying in the grass.  Around 11:00 I remembered Carter and I still needed to deliver the valentines he'd made for residents at the nursing home.  I asked Carter whether he wanted to walk or ride and he said ride.  I got him set up with a snack and a drink in the wagon and I put the valentines in a bag to drop off.  It was a beautiful day with the temperature already around 70 degrees.  I needed the walk to help stretch out my sore legs from the race earlier.  Inside the nursing home there were a few residents by the nursing station and they really enjoyed seeing Carter.  He was a bit tired, but happily told them "hi".  One of the ladies excitedly showed Carter her Valentine's Day teddy bear and card she had received.  When a nurse came over we handed off the valentines and then headed out as I didn't want to share germs with or from the residents.  This flu season has been no joke! 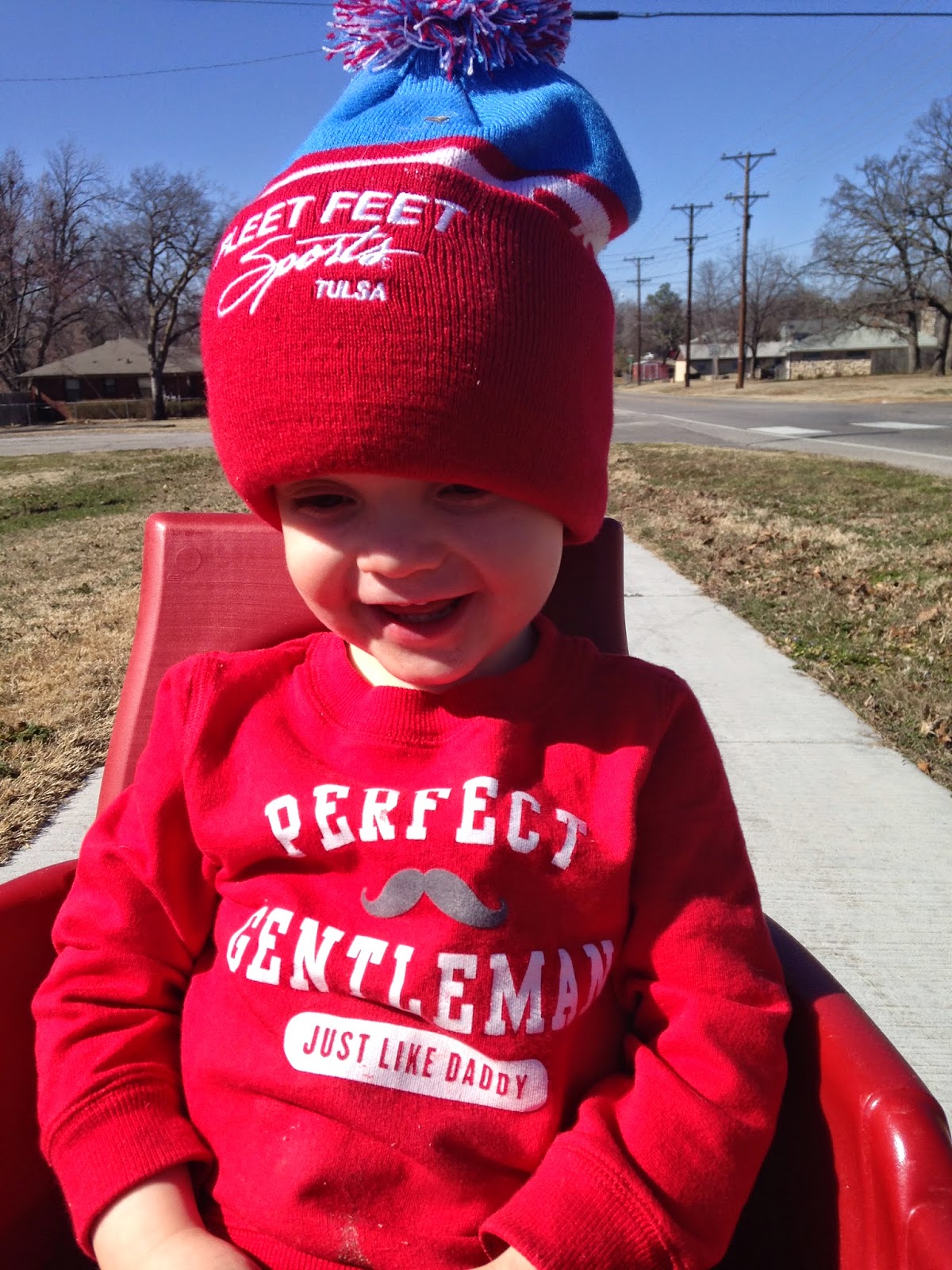 Back home we heated up enchiladas mom made and brought for lunch.  We ate outside at our patio table and Carter kept exclaiming, "Lalas good!"  Jeremy came over to eat lunch which also delighted Carter.  After lunch Carter went down for a nap while dad and Jeremy headed out to do some work at Jeremy's house.  Then dad headed to Thomas' house to help him install his storm doors while Jeremy and mom went shopping with birthday gift cards to the book store.  I stayed home with Carter and enjoyed quiet time reading Ina May's Guide to Childbirth after making some last minute valentines for everyone.  Then I laid down and took a short 30 minute nap.  Carter woke up shortly after I did from his almost 3 hour nap, but was still tired.  Everyone else was still gone and Ty was in the garage working so Carter and I decided to do some of our Valentine's Day themed activities we hadn't gotten to yet.  We sorted construction paper hearts based on size, sorted conversation hearts by color and ate them, then we made binoculars and went outside for a heart hunt.  After our heart hunt we played outside until 5:30 when mom and Jeremy arrived home.  Then we headed inside to see everyone and to get ready for dinner which was heart-shaped pizza! 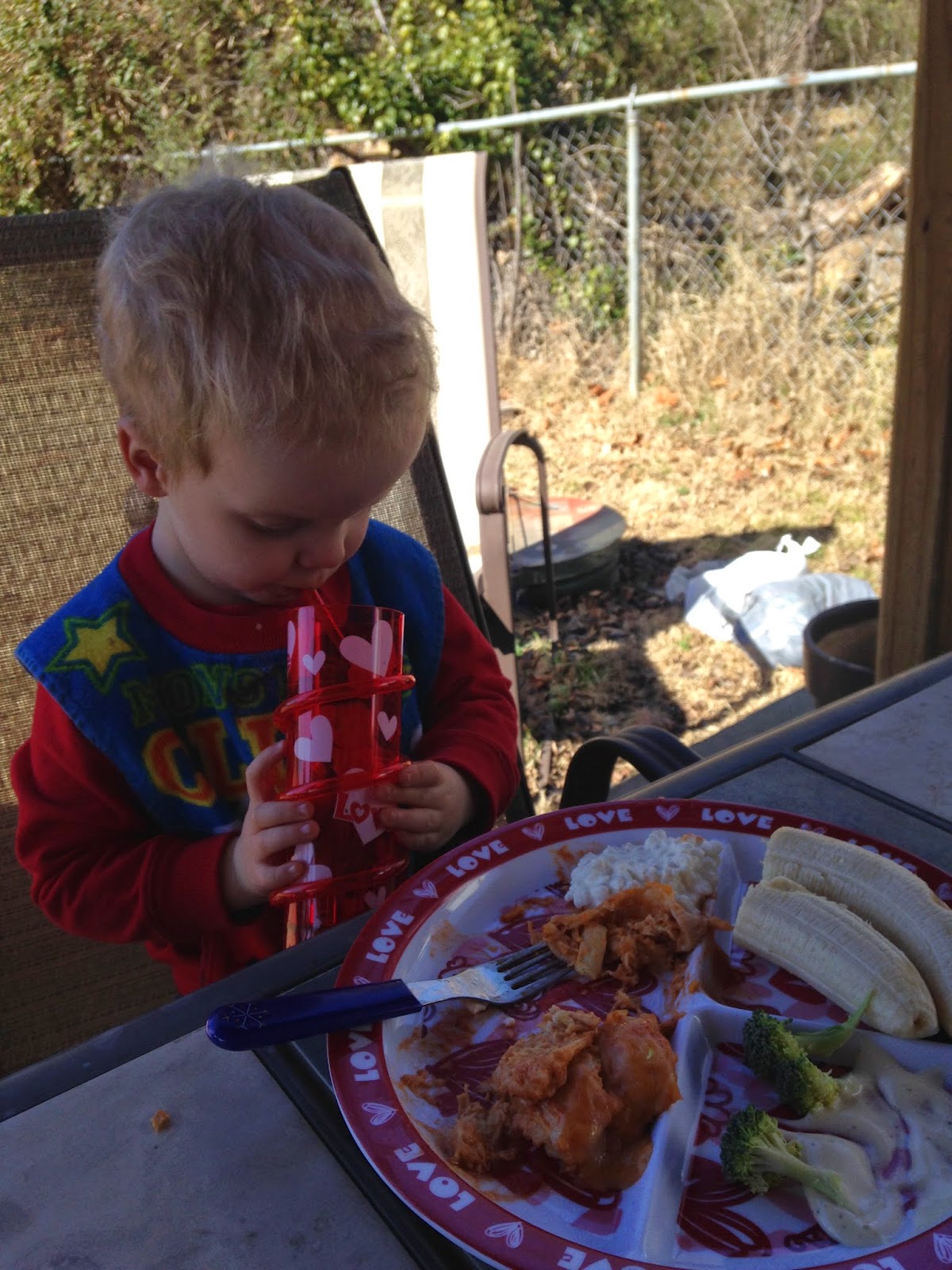 After dinner we enjoyed a Texas sheet cake my mom had made along with vanilla ice cream.  Then we all got out our Valentine's Day bags and read our valentines.  Everyone enjoyed the valentines Carter made them.  Ty opened his Odell Beckham Jr t-shirt jersey I got him and was quite excited as he was Ty's breakout Fantasy Football player who helped him win the championship.  Then it was time for Carter's bath.  I took his foam hearts, heart necklaces, and heart decorations into the bath so he could have a special Valentine's Day bath time.  We then facetimed his Gpa who was at the hospital with Papa so we could say Happy Valentine's Day!  Carter had a blast in his bath and was cozied up in footie pajamas in bed by 8:30.  It was a wonderful day filled with memories and love for us all!

Posted by Liz Runningmomma at 11:17 AM