Surprisingly for someone who gets scared easily and hates horror in both book and movie form, I love Halloween. I like the spooky side of it and the combination of orange and black. Well, and the candy and caramel apples, carving pumpkins, and I think bats are cute and fascinating. I had so much fun with our Halloween learning theme and enjoyed how many activities we were able to include Elise during. Read about last year's Halloween learniing theme here.

5 Little Cats
5 little cats sitting on the floor.
The first one said, "I'm going out the door."
The second one said, "Don't you leave the house!"
The third one said, "I think I hear a mouse."
The fourth one said, "Now, don't you worry."
The fifth cat said, "I'll catch it in a hurry!"
Then, "Squeak, squeak, squeak" and flap, flap, flap.
Turns out it's not a mouse, it is a bat!

5 Little Spiders
5 little spiders sitting on a web.
The first one said, "I think it's time for bed."
The second one said, "Not now, it's Halloween!"
The third one said, "What do you mean?"
The fourth one said, "There are ghosts out tonight!"
The fifth one said, "They give me quite a fright!"
Then, "Boo, boo, boo!" was the sound a ghost made
and their web shook as they were all afraid! 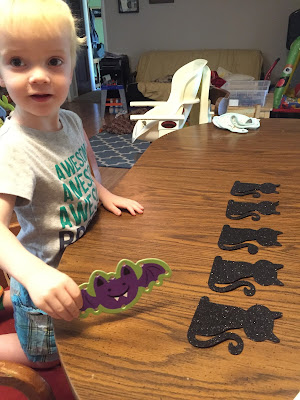 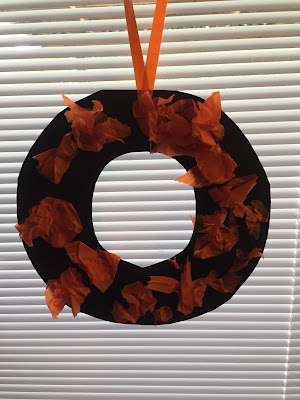 Posted by Liz Runningmomma at 1:30 PM