My friend Elissa invited us to her house for Halloween. She thought her son, Grant, and Carter would enjoy trick-or-treating together. It was Grant's first time trick-or-treating and Carter had the experience from last year so she was hoping Grant would follow Carter's lead. We ran the Hearts and Halloween 5k in the morning, more on it to come later, and got home in time for naps. Carter took a nice long nap and woke up just in time to head to their house. He woke up crying and didn't want to put his costume on but after some snuggles and reading books he was ready to go. Mom, Jeremy, and Thomas all left a little before us to pick my dad up at the airport because he had been at a conference in Texas.

Carter was so excited to see Grant when we arrived and they played for quite a while. Elissa had ordered pizza for dinner and had some grapes and a veggie tray to go with it. The food was delicious and then she pulled out an adorable Halloween themed dessert plate. As we were finishing dinner they started getting trick-or-treaters at their house so we decided it was time to head out. The boys got in their costumes, Grant was adorable in his duck costume and Carter got in his pirate costume. It was nearing 7:00 so we decided against putting Elise in her costume and I wore her in the carrier so she could sleep as we walked and, amazingly, she did just that! Carter was so excited. He was running to each house and Grant was moving much slower as he just turned 2 so I'd have Carter run out past us and then run back. He was getting in quite a bit of mileage! He loved ringing the doorbells and knocking on the doors. He did such a great job saying "trick-or-treat" and "thank you" although occasionally he'd accidentally say "you're welcome" instead of "thank you". He was even brave enough to walk up to houses by himself!
We had decided to go ahead and outfit the stroller as a pirate ship one last time and it got a lot of attention. While we were out we saw a wagon that had been made into a train which was really cute but was no comparison to Ty's creation from last year. After about an hour of trick-or-treating Carter told me he was sore. When I asked where he said, "My body. My body is sore!" All the running had caught up to him and he was getting worn out. I convinced him to get in the stroller and he rode for a while between houses. Around that time Oma, Opa, Uncie J, and Uncie Taco met up with us and walked with us for the last few houses. 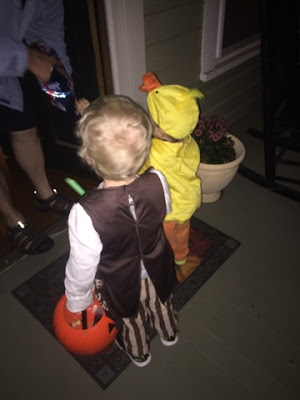 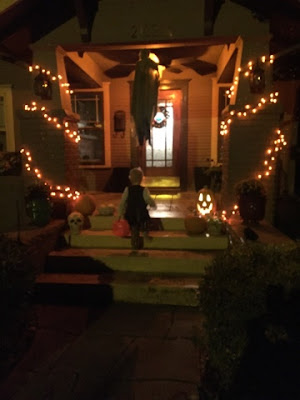 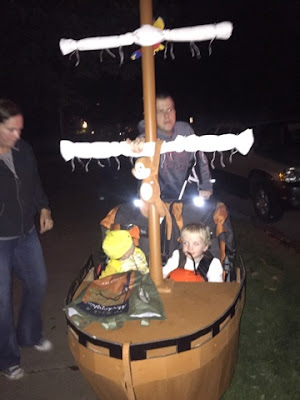 When we got back to Elissa's house the boys ate a couple pieces of candy and then we packed up and headed out. It was an awesome night and we all thoroughly enjoyed ourselves. Carter even more so than the rest of us I'd say! I'm already looking forward to Halloween next year with Elise toddling along after Carter as we trick-or-treat. The stroller idea and our costumes are already in the works. I enjoyed being a part of the costume so much this year we are planning out a whole family costume again. I've always loved Halloween but now with the kids to watch enjoy it and the excitement of Ty's costume creations it is becoming a favorite holiday for me. Not sure it can surpass Valentine's Day as my favorite, but we'll see! Until next year, much love from the family of pirates!
Posted by Liz Runningmomma at 12:41 PM

Email ThisBlogThis!Share to TwitterShare to FacebookShare to Pinterest
Labels: Halloween