Another Tempo Run, Another Break Through

I'm at a great spot with my running right now. I feel like every race I run and each training run I head out for I have another postpartum PR or another fastest pace since Elise was born. I finish my runs and I get that runner's high that I had been missing. I walk away from runs with my legs feeling worn out. I'm finally to the point where I can push myself and feel sore, not pained. It's a great feeling. I've missed the kind of running where you head out and are surprised by fast paces or how strong you feel. I've missed going out and pushing my body hard and then recovering enough to push it again with just one easy recovery day in between. It may have taken 7 months to get here, but I'm here and I'm loving it! This weekend was our first free weekend in a while with no races or traveling. It was also 2 weeks out from the half-marathon we will run the weekend before Thanksgiving so it was the perfect time to get a long run in. I planned to do an 8 mile tempo run with a mile warm up and a mile cool down for a total of 10 miles on the day. My last tempo run was a 6 miler the weekend after the Prairie Fire half-marathon. I was able to run it in 7:35 pace so I figured 7:30 pace would be a good goal for my 8 mile tempo as it was 2 miles longer but I had only raced a 5k the weekend before rather than a half-marathon. I headed to run from a trail spot near our house that has a giant hill in the first half mile. I knew that meant I would have a long downhill during the first mile and a horrendous uphill during the last mile but I wasn't worried about it since they would be my warm up and cool down miles.  We had talked about possibly running the Jenks half marathon this weekend, running it as a long training run rather than a race. I was really tempted because I have a friend who coaches the cross country team that hosts the race as a fundraiser for their team and because they gave out candy bars at the finish line. That in mind I knew it would cost money rather than be a free training run and I hadn't particularly enjoyed the race when we ran it 2 years ago. It was a small race and I ended up running mostly alone. The course it open to cars so you have to run on the slant of the road and there were no spectators out on the course since the roads were open to traffic. Instead we decided we would buy Snickers bars to eat after our long run. So I headed out on my run with my Snickers bar in the car awaiting my return.

I took off and felt comfortable yet a bit sluggish running my warm up mile which I ran in 8:20 pace. With how my warm up felt I decided to run my first mile of the tempo by feel rather than watching my pace on my Garmin. I was afraid I was going to struggle and didn't want to force 7:35-7:40 pace for the first couple miles and burn out at the end. I was shocked when my watch beeped for the first mile and I had run it in 7:29. In my head I figured I was just excited to get the first fast mile in and I would slow down. I didn't want to get frustrated that my pace was slowing so I made sure not to check my watch for pace, running based on feel. The next mile was 7:22. I was feeling great at that pace and was so glad I hadn't paid attention to my pace those first 2 miles because I would have forced myself to slow down. I couldn't believe how great I felt. I was definitely pushing the pace but I felt comfortable. Knowing my goal for the half marathon on November 22nd is to break 1:40 which is around 7:35 pace, I was getting really excited at the pace I was running. Miles 3 and 4 were 7:22 and 7:23 so I was maintaining the pace! I ate my Gu when I hit mile 5 of my run/mile 4 of my tempo. Typical for long runs, once I ate my Gu I was able to speed up. The next mile was 7:20 and my goal for my last 3 miles was to be under 7:20 pace. I did that easily with miles 6, 7, and 8 at 7:10, 7:09, and 6:59. 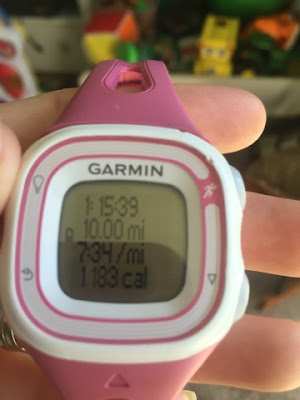 I was so pumped my last 3 miles were faster than what I had been running for a 5k just 2 months ago. My average pace for the Little Balkan's 5k at the beginning of September had been 7:10 per mile. It's not easy getting back into shape postpartum, but it sure is rewarding! When I first started back running after Elise was born I knew a little bit better what to expect as far as how long it would take me to get my running form back since I'd experienced it after Carter was born. Still it seemed like it would be forever until I was back running the times I wanted to be running! Sometimes it is hard to be patient, but it sure pays off! These last few months as I've finally started to get back down to my pre-pregnancy paces and times it has been extremely motivating to get faster each time I race or go out for a long run. I'm proud of the work I put in both during my pregnancy and afterward to get to this point. I'm pumped about my last couple races and long runs and I'm ready to rock the half-marathon in 2 weeks!

Posted by Liz Runningmomma at 1:19 PM

Email ThisBlogThis!Share to TwitterShare to FacebookShare to Pinterest
Labels: half marathon, postpartum running