Saturday morning we ran a race that is near and dear to all of our hearts. It was a race that benefits the Lauren Elise Memorial Foundation. We run if for Lauren Elise, Elise's namesake, and her family. The cause is very important to us and we drive a little over an hour there and back to show our support. This year I had a really awesome race that I am still feeling excited about. With my equivalent to a 21:16 last weekend I was just hoping to come close to that time and maybe shave off a few seconds. We needed to leave the house by 9 am and I knew Elise would wake by 8, so I didn't bother to set an alarm. At 8:40 my mom woke us and we rushed around to get ready, leaving 10 minutes later than planned. I put the race start into my phone and it said we would arrive at 10:32. The race started at 10:30 and we had to get the kids in costume, Ty had to put the stroller together, and I was squeezing my legs together resisting the urge to urinate. I was nervous! Thankfully Ty made good time arriving at 10:25 and they started the race late! After some awesome teamwork, mom got Elise in costume while I dressed Carter and Ty outfitted the stroller, I was able to run to the restroom and even had time for a short half mile warm up! As we lined up at the start they announced the costume contest winner was Ty and then Mark, Lauren's dad, gave a short speech thanking everyone for being there and explaining the significance of the race as well as the foundation it raised money for. I stood with tears in my eyes and was so ready to run a fast race in honor of Lauren Elise.

They started the race with a countdown and we took off. Immediately a college-aged girl sprinted out in front and then somehow tripped, rolling to the side of the race. I have no idea how it happened. She got up uninjured and for some reason the incident struck my funny bone and I laughed off and on for the first quarter mile. Thomas was running alongside me and it was fun to talk with him. By the half mile mark I had moved my way into 8th place overall and stayed there for most of the race. The course is a loop around a lake which is pretty neat, although decently windy each year. We ran straight, turned to cross a bridge, and then turned again so we were running on the opposite side of the lake. The sorority girls who help host the race write with chalk on the sidewalk all the way along the course. Although I was running alone for most of the race I really enjoyed reading the chalk and seeing the girls cheering at a lot of spots along the course. They did a great job of spreading out to spread the cheer. I read one chalk writing that said, "Catch the taco," and wondered at its meaning until I came across one of the girls dressed in a taco costume cheering which cracked me up. I went through the first mile in 6:48 which I knew was the same as what I'd gone through the first mile the week before. My goal was to run under 6:54 for my second mile so I could beat my 2nd mile from the week before.
I kept thinking I must be slowing down because I was running all alone. The closest person to me had at least a 10 second lead. I felt strong and felt like I was maintaining pace. At about the half way point I passed the guy ahead of me so the closest person to me had an even larger lead and I could barely see him. I was pushing myself without anyone to work toward passing but I felt great. I was a little shocked and quite pleased when I went through mile 2 in 6:48. I hadn't slowed down at all despite running completely alone! I felt really strong and knew I could pick up the pace for the last mile. During mile 3 we crossed a wooden bridge and then eventually took a couple turns which left us back on the other side of the lake heading toward the finish line. I heard my watch beep for mile 3 and saw my split was 6:43. I knew I was running significantly faster than last week and felt so fluid and strong. I continued toward the finish which I could see ahead with everyone excitedly cheering me on since I was the top female finisher. I stopped my watch to see I had finished in 20:56! That put me finishing in an average of 6:45 per mile, 7 seconds per mile faster than the week before! My goal has been to get back under 21 minutes by April so I had a great feeling of accomplishment to have already reached that goal! I was even more proud of myself that I had done it running what was extremely close to a tempo run in regards to having other runners around to push me! After I crossed the finish line they took me over to pick out a prize since I was the top female finisher. I chose a purse that came with $15 worth of Panera gift cards. The purse was cute, but I picked it for the gift cards! They also gave me Ty's award for the costume contest which consisted of a shirt and 10 more dollars of Panera gift cards!

Prizes in hand I jogged a cool down back to Ty so I could run to the finish with him. He got lots of cheers for his awesome costume and Carter was being hilarious in the stroller. When we finished I took off to run back to my mom so I could walk to the finish with her. On my way I saw the girl who had fallen at the beginning of the race. She was run/walking not far ahead of mom which left me wondering why she had been in such a hurry at the start. I enjoyed walking back with my mom, chatting, and telling her about my PR race! My fastest time after Carter was born was a 20:59 at over a year postpartum, I had bested that time by 3 seconds a mere 7 months after birthing Elise! I was so happy and proud and grateful for such an awesome return to my pre-pregnancy form so quickly!

The race didn't utilize chip timing and has no official results online so I don't know other people's places and times other than Jeremy who was 4th overall in 19:21. Thomas didn't seem to be too far behind me and Ty ran really strong with the stroller. Dad didn't run because he was at a conference and didn't return until that evening and mom walked the race beating a surprising amount of people! We stayed after the race taking to Lauren Elise's family and taking pictures. When I headed over to pick up a Gatorade one of the girls cleaning up offered me an entire package of them along with a package of Nutri Grain bars, granola bars, and a bundle of bananas. We cleaned up at the race! Kirsten, Lauren's mom, invited us to go to lunch with them but Elise was ready for a nap so we opted to stop through the McDonald's drive thru for all day breakfast on our way home. There was a McDonald's where all we had to do was exit the highway and it was in between the two sides of traffic. Carter insisted on scary face pancakes like he'd had at IHOP the day before so I sat making a face on his pancakes with butter before I was able to eat my food but it was so worth it to see how excited he was! Elise slept through everything and had an awesome nap on the way home totaling almost an hour and a half. When we returned home Carter went down for a nap and we rested up for trick-or-treating later that evening. Another awesome race in the books! 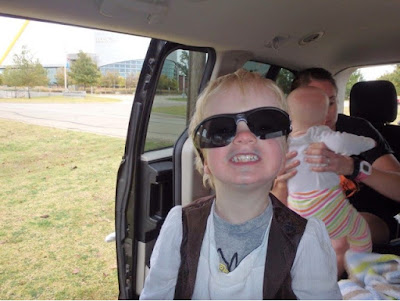 Posted by Liz Runningmomma at 2:19 PM