As we were walking some dogs were barking at us from behind their fence. Carter yelled at them, "Go find your home!"

We have an overweight neighbor with a huge beer belly. Carter pointed at him, from inside our house looking at him through the window thankfully, and said, "That man have a baby in his belly?"
Carter was looking at me with a pouty lip face.
Me: What's wrong, Carter?
Carter: I just love you so much!

I was crouched down talking to Carter and he kept moving his head so I kept turning mine so I could look at his face. He grabbed my head in his hands then said, "Stop moving like that!" Then he leaned in, took a long sniff of my hair and said, "That smell nice!"

We were driving in the car close to naptime.
Me: Carter what are you doing?
Carter: Just sucking Carter's thumb.

I told Carter he was going to Uncie J's house while I ran some errands.
"I say bye to you when you go to Erin's house."
Erin is my best friend from high school who we see a lot. 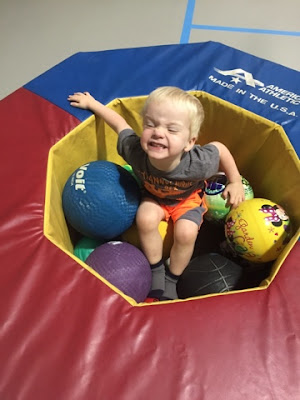 While feeding Elise I heard the fridge door open.
Me: Carter, what are you doing?
Carter: I not grabbing any someping!

We were at the zoo with some friends who tend to rush through the exhibits. We were in the rainforest and Elise pooped her diaper so I stopped to change her. Carter started to rush ahead with his friends so I yelled his name to get him to stop. There was a macaw right above me and it also yelled Carter's name. He stopped in his tracks and waited for me with his hands covering his ears.

Carter loves to talk to Elise and have me pretend to be her and answer for her. If I try to answer like it's me he'll say, no be sissy! I've also heard him laying down beside her talking to her and pretending to be her, answering for her. He is going to be so excited when she can talk and have conversations with him!
Posted by Liz Runningmomma at 12:09 PM