Labor Day weekend Ty has a Fantasy Football draft each year. The guys in his league have deemed the day "Ty's Christmas" because he enjoys it so much. He does mock drafts for weeks leading up to the draft and researches strategies. He buys a bunch of meat and spends all day leading up to the draft smoking it. I jokingly asked him if it's his favorite holiday and then I found out what the guys started calling the day, which cracked me up! The draft was scheduled for Friday so Ty took the day off work. We drove up Thursday evening after he got off work. He spent all morning Friday smoking meat and preparing for the draft. Then he was off for the draft that evening. Carter, Elise, and I enjoyed time with my mom as my dad was at work. Labor Day weekend in my hometown is a festival called Little Balkans Days. There are events going on Friday through Sunday. Friday morning Ty, Carter, and I took Harper to the vet. Then while Elise napped and Ty smoked, Carter, my mom, and I headed up to a petting zoo. Carter enjoyed the animals but wasn't too interested in petting or feeding them. He did touch a few of the animals but was hesitant to get too close to most others. When we left he said his favorites were the camel and the turtle. My favorites were the ring tailed lemur and the chipmunks. My mom treated us to lunch and we stopped by the bakery that made Ty and my wedding cake to pick up cookies on the way home. It was a very successful morning! 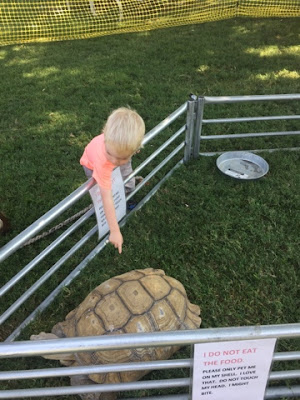 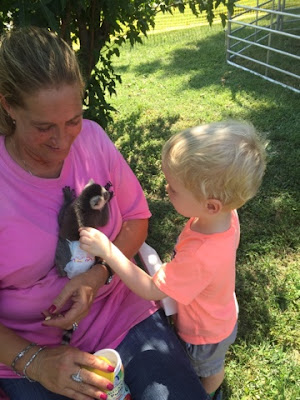 That evening I took the kids over to see my best friend, Erin, and her kids, Hayden and Addison. Elise and Addison were much more interested in each other than they have been in the past, babbling to each other and grabbing at each other. Carter had a blast playing with Hayden and Hayden's cousin, Drew, who was visiting for the weekend. As dinner time neared Carter and Hayden got increasing more rambunctious, running through the house very loudly. I took that as our cue to head home. 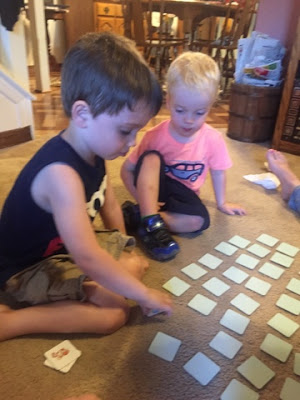 Saturday morning we got up early for a 5k and kid's fun run which I will write more about later. Then my mom, dad, Carter, and I were off for a train ride. Carter was pumped and sat at the window looking out and waving for the first 15 minutes or so. Then the next 45 minutes of the ride quickly deteriorated into his normal long car ride behavior but without the restraint of a car seat. At first it was just him asking me to tell silly Opa stories over and over. Then he started climbing on me and trying to climb over the top of the seat. My mom and I agreed that next year we'll just drive out to see the train. Had the ride been 30 minutes rather than an hour and had I not been exhausted from a restless night of sleep followed by a 5k, it would have been much more fun. 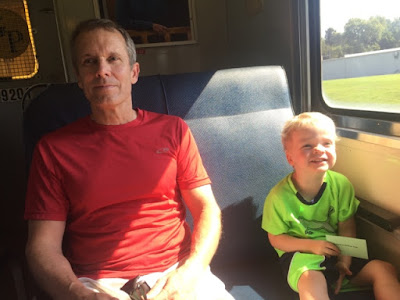 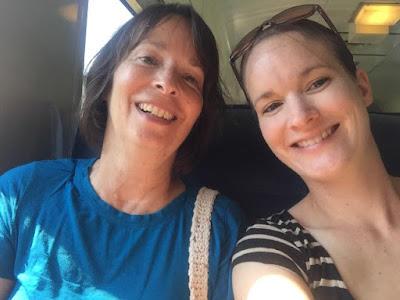 After the train ride it was time for lunch and naps. I took a 30 minute power nap and then my mom and I headed out to the Main Street in town. There were arts and craft vendors along with food and inflatables for kids set up. There was a stage with live music as well. We had a lot of fun and then Carter woke up after only an hour and a half nap so my dad and Ty brought him up to meet us. He was a wild child so we quickly high tailed it to the kid's area. Jeremy called to say Elise was up so I was off to nurse her while everyone else stayed. That evening Ty and I went on a date to a super delicious steakhouse in town using a gift card my parents had gotten us for our anniversary. The food was delicious and it was so nice to have some alone time with Ty. A bonus was that our server ended up being my best friend from elementary school so we got the chance to catch up with her. I was so excited for our date I had packed a dress and planned to get all done up but when I went through my bag I realized I'd forgotten to pack my make up. I guess that's what happens when you only wear make up maybe once a week!

Sunday we went back out to the street fair so Carter could play on the inflatables again. Erin came over with her kids for a bit to hang out and then we went over to visit the family I used to babysit for. Brent, the older of the 2 boys, had gotten out and cleaned up his old army men toys for Carter and sent them home with us. I failed and didn't take any pictures at their house!

Monday was a relaxing day. I got up with the kids and when Elise was ready for her morning nap I took her up to Ty and headed out for a run with Carter. We ran to the park and played for quite a while so everyone else could sleep in. When we got home my mom had my dad set up the inflatable pool so Carter could play. My dad got in with him and Carter decided he was a baby seahorse and Opa was a daddy seahorse. After naps (Elise didn't wake up from her afternoon nap until 5:30!) my parents took us out for dinner and then we were on the road home. It was a very busy and fun long weekend!