"Your hair looks delicious, I want to eat it."

While playing outside at a playground.
"I love to be hot. I love to be cold. How about you, mommy?" 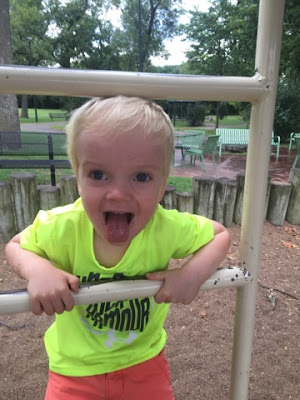 Elise was in her bouncer across from Carter as he sat on his potty.
"Look, sissy watching Carter. She say, good job, bruvy!"

While getting dressed Carter put his socks on his hand and said,
"Carter do that like a turkey does!"
At first I was clueless, then I realized he was talking about the book, "Blue Hat, Green Hat" by Sandra Boynton.

As He purposely ripped a clown nose in half he said, "Carter broke it. Bummer."
My Love and Logic ways and sayings are alive and well from my years of teaching. I guess Carter's picking some of the sayings up.

My parents sent Elise and Carter a package with clothes and a few cook books for me. I always read the notes my mom writes first before we get anything out. After I read the note and Carter had pulled everything out he picked up a cook book with cookies on the front and ripped out a mail in postcard that was inside. Then he pretended it was a note and he was reading it.
"Dear for Carter and Elise, here's for a birthday party."
Then he looked at me and said, "We having a birthday party?!!!?"

Me: 5 years ago today your daddy asked me to marry him.
Carter: Can I go with you?

As I was feeding Elise she pulled off and stared at Carter because she heard his voice. He walked over, patted her on the back and said, "Sissy eat some more for mommy. Okay?!"

Carter pulled apple sauce out of the fridge as Ty was getting food out for dinner.
Ty: Why do you want that?
Carter: Because I love it!

We were at the park and there was a big rope net to climb that was in the shape of a spider's web. As Carter climbed it he sang The Itsy Bitsy Spider.

If he finishes lunch before me I'll ask him to stay with me to keep me company. He takes it very seriously and considers it his job to entertain me. He'll stand by the table singing and dancing until I'm finished eating.

One day he asked me for a candy bar from the car. I had no idea what he was talking about as we didn't have any candy bars. And the only time he even had a candy bar was at Halloween last year. Then I realized he was calling the chocolate chip granola bars we got at a race candy bars. So our child calls granola bars candy bars, score one for the team! 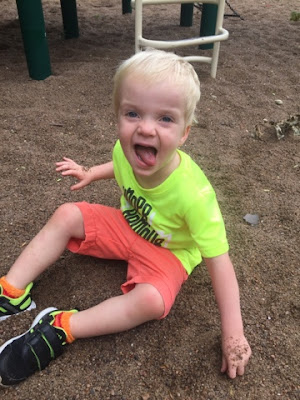 Posted by Liz Runningmomma at 12:27 PM