What I'm Loving This Summer...

Outdoor yoga. The beginning of the summer was really mild and I have loved that! Most days I took the opportunity to do yoga in the backyard and it was the best! Now that it's warmed up, I've done yoga in the backyard while the kids played before it got too warm. I love looking up at the clouds as I do different yoga moves and feeling the sun on my skin as I move. 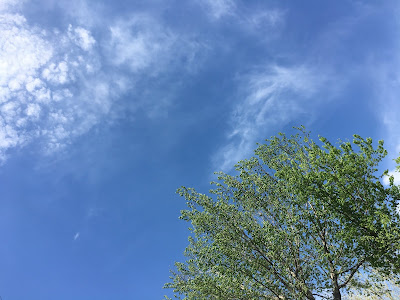 Carter reading. It is so much fun to listen to Carter read. He will sit in his room and read out loud or we will sit together on the couch while he reads to me. I absolutely love his confidence and his joy for reading. He will occasionally ask to read to me but if I asked him to read to me, he didn't want to. I decided to make him a reading list so he'd be more motivated to read to me. His first list he got to pick out a Lego Ninjago after reading 10 books in English and 10 books in Spanish. Now he's working on his 2nd list where he'll need to read 15 books in each language and he's almost done!

Having time to downsize and organize. This summer I got an itch to go through and reorganize the kids' toy area in the living room. We got rid of the train table and got an organizer with cubbies to put their toys in. While I was working on that I moved things around in Carter's room and ended up totally reorganizing his room. The next week it was on to the drawers under Ty and my bed and our dressers. Then the following day I worked in Elise's room. It makes such a difference having everything organized and easy to find. The kids play with their toys so much more now that they are in bins than they did when they tended to just throw everything onto the train table without putting it in the bin it belonged in. When organizing our room I came across a bunch of my grandma's jewelry that I totally forgot I had so I've enjoyed wearing it more now.
Tea parties. We had friends over and the girls wanted to fill Elise's tea pot from her tea set with water. I washed everything so we could have a tea party and served the girls flavored water with some snacks. Carter came in and saw us so he wanted to have a tea party the following day. Since then we've had a bunch of tea parties and it is so much fun!
Trail running. Summer is my off season when it comes to training. I take the season easy with lower mileage weeks and just base mileage to prepare for the fall racing season. I love speed work and tempos but my body just needs that break. Without the speed work and tempos to break things up, base mileage can get a little boring. Last year I started running with a trail running group once a week and that really helped mix things up and make the summer more fun. I was so excited to get back into this summer and really enjoy running trails at least once a week.
Posted by Liz Runningmomma at 7:00 AM