Mom, dad, and Thomas were all signed up for the Gorilla Grind 5k which is run in conjunction with homecoming each year. I decided not to run it because I planned to do 20-22 miles that Sunday as my last long, long run before the marathon. Ideally I'd do a 20+ miler about 3 weeks out from race day but I have a race that weekend as well as one this weekend so 5 weeks out it was. Friday evening we went to the high school football game to see a boy I used to babysit (I started babysitting his older brother before he was born and he's now in high school which makes me feel a little old!) play in the marching band. When we got home we started discussing specifics for the morning and when they'd be leaving for the race. I started thinking if I was going to run 4 miles that day anyway I might as well go along with them to the race and just run it at an easy pace rather than a race pace. Ty started egging me on because he wanted me to get a large shirt and give it to him. The shirts did look pretty awesome! We went to bed around midnight and I figured if I woke up enough before 7:00, when registration ended, I would go along. 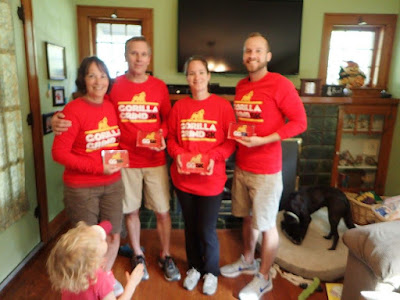 Saturday morning I woke up at 6:30 to the kids getting up and after laying in bed for a while I decided to go ahead and get up as well. When I showed up downstairs my mom was quite surprised that I had pulled myself out of bed. I got signed up in plenty of time. Mom and Thomas headed to the car and I caught up to them saying how I love seeing the sunrise in the morning. They both laughed because they were just saying they don't like seeing the sunrise because it means they are up too early. Thomas and I took off for what was supposed to be a half mile warm-up but I wasn't paying attention and we ran almost a mile. Thomas said he wasn't sure what pace he'd be able to run and I told him I tend to run about 20 seconds per mile faster in a 5k than in a 10k. After the race he said that ended up being almost exactly what he'd done at this race compared to the Zoo Run last weekend. As we headed over to the start I asked dad what pace he was planning on running and he said 8 minute pace so I told him I'd stick with him. He said, "Yeah right, you won't be able to stand it." My plan was to run around 8 minute pace, but nothing faster than 7:30 pace.

We took off and there were around 6 women ahead of me. I ran the first mile in 7:40 and had already passed a few of them. As I started the 2nd mile I could see that the 3rd overall female didn't have too much of a lead on me so I figured I might as well try to catch her and be top 3 overall. I was close enough to her, I could do it without speeding up too much. I went through mile 2 in 7:28. Once I moved into 3rd overall, I looked up and couldn't believe how close I was to the top female in the race. I couldn't help but want to go for it because she was coming back to me. I caught up to the girl in 2nd overall and I say girl because she was maybe 12 years old. As I passed her she pointed toward the finish line and asked me if that was where we finished. I told her no, that we turned before the finish because we had about a mile to go. She was so dejected and I felt bad for her that we could see the finish line but weren't ready to cross it yet. She seemed like she was really struggling but when I looked at the results, I was impressed to see she was able to hold onto the 3rd overall female spot.

As we turned before the finish and I saw I was slowly but surely catching the woman out in front of me, I started thinking, it's okay if I run under 7:30 pace. I justified it with the fact that I had run the Corndog Challenge 5k the day before a 15 miler which went really well. I told myself I ran 7:05 pace at that race so if I ran a little bit slower at this one, 22 miles the next day should be no problem. We ran to the end of the road and then crossed over to the other side of the road and ran back that way toward the finish. As the woman in front of me started to cross a car came and the volunteers didn't stop the car so she had to stop for it. As she did she looked back and saw me and I'm sure was pretty disappointed the car had caused her to lose a few seconds of her lead. I caught her about half-way down the street and figured I'd just hold steady to keep the lead but not kick too hard to the finish as there was no need and I wanted to save my legs for the long run on Sunday. But then as I turned the corner for the final quarter-mile a guy cheered for the lady behind me saying, "Come on, you can get her! Smoke her!" I figured she must be right behind me and I wasn't about to run faster than I planned just to come in second place so I took off. I didn't realize how much I'd sped up until I looked on my Garmin and saw I'd run the last quarter mile at 5:30 pace! I ended up winning by 12 seconds.

Thomas finished 9th out of 75 overall and 2nd in his age group with a time of 22:29. The course was a bit long. Everyone's Garmins read about 3.2 so his Garmin showed he ran 7:09 pace. I finished in 23:09, 10th overall and 1st out of 40 females. My Garmin showed I averaged 7:17 pace. Dad finished 22nd overall and 2nd in his age group with a time of 25:33. Mom finished in 35:09 which put her 55th overall and 1st in her age group. When she first got her print out she was cracking up because it showed she was the only finisher in her age group. Once everyone had finished there were actually 3 people in her age group. During the awards ceremony the announcer said, "And for our last awards," before announcing mom's age group which we got a kick out of. The race was quite a bit of fun and I enjoyed running the race a lot more than I would have enjoyed running by myself. I figured I'd made the right decision as long as my long run went okay the next day. We left the race and headed back to my parents' house to pick the kids up and head to the homecoming parade.
Sunday morning I went out for my 22 mile long run which I was prepared to cut off at 20 if need be. I was a little nervous because it would be the only long run over 15 miles this season that I would run entirely alone. Thomas had raced the 5k the day before and was taking the day off and I wasn't in town to run with any of my regular running buddies. I took off really conservatively at the beginning of the run even though my legs felt great. I didn't want to take off too fast and pay for it at the end of the run. I felt great all the way through and enjoyed running out on some gravel roads I used to do long runs on when I ran with my friend, Sara. I enjoyed seeing the fields grown over with plants and running along pastures filled with cows and other livestock. It reminded me of a time Sara and I had a cow run alongside us until the road ended and we turned. My experience this time was that the cows would stop and stare at me and then take off running away from me which was also humorous. I kept my pace pretty steady around 9 minute pace, fluctuating here and there when I ran into the wind or up some hills. Then the final 6 miles I was feeling really good so I decided to just take off and was able to run those miles all at 8:30 or under with my last mile at 8:04. I was very pleased with how I felt the day after running a bit of a faster run. I was also happy with how my legs recovered afterward. I felt great and even took the dogs on a walk with my mom. I'm getting more and more excited for the marathon and now wish it wasn't so far away!
Posted by Liz Runningmomma at 6:40 AM